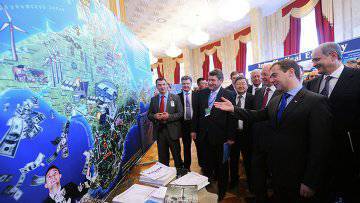 One of the main topics for discussion at the last summit of heads of government of the CIS countries, as well as at the 3 investment forum held in Yalta, was the question of what principles to develop and expand the Free Trade Zone within the Commonwealth.

It is worth recalling that the Free Trade Zone (or FTA) itself legally took shape in 2011 year. At the moment, in addition to Russia, the FTA includes such CIS countries as Ukraine, Belarus, Armenia and Moldova. In Kazakhstan, Kyrgyzstan and Tajikistan, agreements on entry into the FTZ are at the stage of parliamentary ratification. During the Yalta meeting, agreements were reached that the Commonwealth Free Trade Zone may join Uzbekistan by the end of December.

But the expansion of the FTA begins to encounter the first pitfalls. The zone, although it is called free, but in fact there is at least one big obstacle to full-scale economic contacts between member states. This big obstacle can be characterized by such a phrase as the lack of a single currency. On the one hand, it may seem that this is not at all a fundamental thing, because there are such an FTA on the planet that integrate various states on the basis of their national currencies. For example, we can name a number of countries that signed the so-called Bangkok 1992 Agreement: India, Bangladesh, Sri Lanka, Laos and Korea, but in this regard, national currencies play a certain role in paired mutual settlements, but in the general conjuncture the supranational currency prevails. This option is still the US dollar.

As part of the FTA of the Commonwealth of Independent States, there is still no general concept of using the single currency, but it is obvious that such a problem needs to be solved. Many economists say that the common currency in the Free Trade Zone should be introduced in the near future in order for the effectiveness of this economic entity to increase substantially. But if we talk about the single currency of an FTA, which one should be chosen as a basis? It would be strange, at least, to talk about the introduction of the US dollar as such a currency, because the use of these currencies significantly hampers the development of the Free Trade Zone.

In this case, you should pay attention to the words of the Chairman of the Belarusian Council of Ministers, Mikhail Myasnikovich, who during the Yalta Business Meetings Forum stated that it fully allows for the use of the Russian ruble as a single currency. However, it is worth noting that Myasnikovich was talking about the currency of the Customs Union, but if we consider that the Customs Union of Belarus, Kazakhstan and Russia is an economic union that, as you know, is not going to lock yourself in, it is quite likely that the Russian ruble could play the role of a single currency for the FTA of the CIS.

However, in this case there are serious enough opponents to give the Russian ruble such broad powers. So far, Ukraine looks like such an adversary, which does not see the ruble as a currency that can be trusted. In principle, no one is going to say that the Russian ruble is the pinnacle of financial stability in Russia, but according to Dmitry Medvedev’s apt remark, “if you don’t want to pay with rubles, you can at some point come to the need to pay in yuan.” This is the root problem, which over time can lead to an economic deadlock. This deadlock will look like this: in the absence of a consensus in the search for a single currency among those currently used by the CIS countries and, in particular, the FTA, you can get a serious dependence on the external financial system. And if the states of the FTA are going to move away from the dollar and the euro in mutual settlements, then you can easily become dependent on the very Chinese yuan, which has been gaining momentum lately. Well, if a new dependence on foreign currency is formed, then it is quite possible to doubt the advisability of this kind of economic integration. It turns out that the economic platform of the FTA will fall into an obvious dependence on the economy of the state, which is not included in this FTA. In this regard, the issue is solved in two ways:

or try to convince China to join the FTA, but this is an option from the category of those whose probability is close to zero, and with the efficiency of development of the economies of the CIS countries themselves, this will cause obvious problems;

or, nevertheless, to seek and find opportunities for giving one or another currency of the CIS countries the status of a single one for both the Customs Union and the Free Trade Zone. And, it must be admitted that the Russian ruble is much more likely here than any other currency.

It should be said that the issue of endowing the ruble with the status of the single currency of the FTA lies in two dimensions at once: economic and political. The same Ukraine, obviously, is afraid of becoming dependent on the Russian financial system. However, the problems of both these planes can be solved by taking just one step. This step was marked by the Chairman of the Board of the National Bank of the Republic of Belarus Nadezhda Ermakova. She said that even within the framework of the Union State of the Russian Federation and the Republic of Belarus, the introduction of the Russian ruble as a single currency, which is printed exclusively in Russia, can affect the reality of the independence of Belarus. At her suggestion, the Russian ruble can be made a single currency (for the time being the Union State), if several emission centers are created.
The idea of ​​Nadezhda Yermakova is quite sound, but only then it is necessary to move on to a new stage of integration, which can be called economic trust, and better - mutual control. It is possible to create an emission center of the Russian ruble in addition to the Russian territory in Belarus, including, but then reliable guarantees should be provided that all created emission centers will work as excellent Swiss watches - in full coordination of all mechanisms with each other. Otherwise, you get a famous fable about the swan, cancer and pike.

But the question is: is the Russian leadership ready to respond positively to this kind of idea, because if you try to hold the reins of economic regulation only in one hand, then our partners in all the unions within the CIS may continue to have ideas that Moscow just wants to tidy up hands of the economy of neighboring states. And about the fact that such an opinion by certain forces will be cultivated, we can speak with a great degree of confidence. But on the other hand, if these same reins are distributed right and left, then our Rus-Three and all the other horse-states of a single team can run into separation, which will turn the idea of ​​economic integration into dust at the first stage of its implementation.

It turns out that the idea of ​​creating a single currency has matured in the Union State of Russia and Belarus, in the Customs Union, as well as in the Free Trade Zone, but so far no one wants to make concessions. It turns out that in order to realize this idea, it is necessary to move on to systematic discussion of it at the state level with the assistance of experienced lawyers and economists. Since we decided to integrate economically, we need to get down to business, rolling up our sleeves.