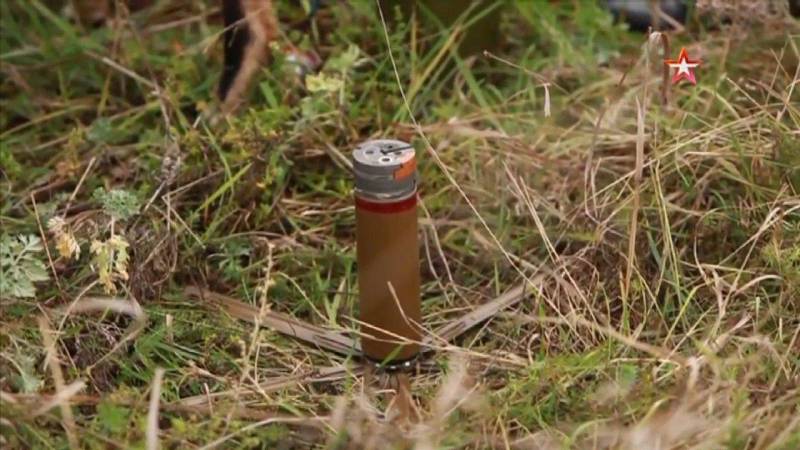 A significant role in the current Special Operation is assigned to the engineering troops. With the help of available technology, incl. of the newest types, they solve a wide range of tasks. In particular, they are responsible for creating minefields around enemy positions and on possible routes of withdrawal. According to the latest reports, the engineering troops began to use modern POM-3 anti-personnel mines to fight the enemy.

Just a few days ago it became known that the Special Operation uses the latest remote mining systems "Agriculture". A video recording of their combat work was published somewhere on the territory of the Kharkov region. Details of this event were not reported. In particular, the type of installed mines remained unknown. However, new information is now emerging, likely to complement the existing picture.

According to the latest reports from various unofficial sources, mine-explosive barriers based on anti-personnel mines POM-3 "Medallion" appeared in the Kharkiv region. Such weapon can be installed by different mining systems, incl. the latest "Agriculture". It is quite possible that it was the Medallion products that were used in the recently shown launches.

Locations of such minefields, number of mines used, etc. unknown. However, the consequences of using such weapons are obvious. A large number of “smart” mines appeared near the positions of Ukrainian formations, capable of selectively hitting manpower. This seriously limits the enemy's ability to maneuver, withdraw or advance. In fact, any attempt by the enemy to change position will potentially lead to losses.

It is curious that the Ukrainian media have already rushed to accuse Russia of using "forbidden" mines. However, such a reaction has no basis and is banal propaganda aimed at the emotions of the public. Mina POM-3 fully complies with the requirements of the Geneva Convention. In addition, Ukraine itself actively mined various areas of Donbass, which makes its accusations look like hypocrisy. 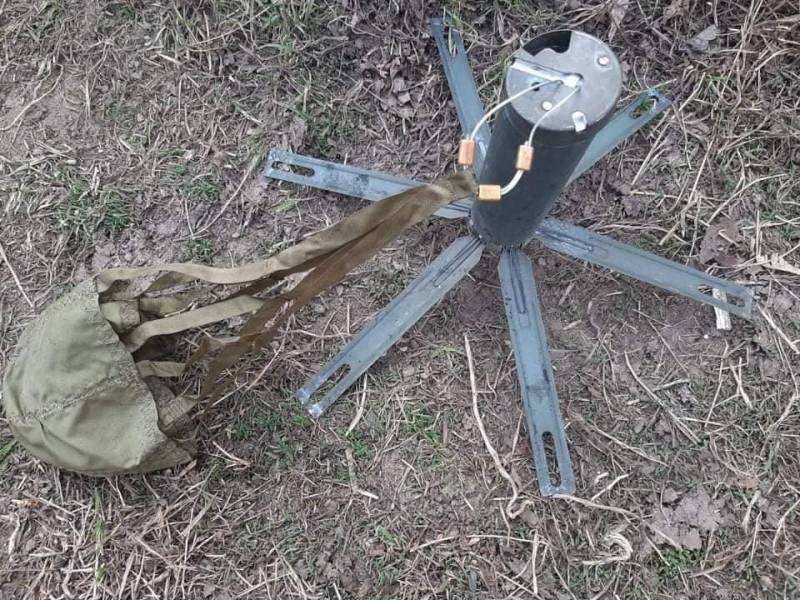 The POM-3 anti-personnel fragmentation mine was developed at the JSC Scientific Research Engineering Institute (NIIII) from the NPK Tekhmash. Development work with the cipher "Medallion" was carried out in the first half of the 2015s, and in XNUMX the developer company spoke openly about it for the first time. Later, the appearance of the new weapon, its technical features and some of the characteristics became known. By the end of the decade, the mine began to be shown at open events; it also became the subject of press publications and television reports.

To date, the "Medallion" has passed all the necessary tests and was adopted by the Russian engineering troops. Apparently, in the future, products of this type were used in the course of various exercises, which made it possible to work out various practical issues and accumulate the necessary experience.

Now POM-3, along with a number of other new models, is used in the Special Military Operation. These mines solve standard tasks for their class. Being in position, they are ready to hit the enemy's manpower - in order to cause maximum damage and / or prevent his movements. How effective such a weapon turned out to be in a real operation is not yet known.

The POM-3 product is a remotely installed anti-personnel mine with a non-contact method of target detection. During its development, some ideas from older projects and a number of new solutions were used. All this made it possible to obtain all the necessary capabilities and provide advantages over older mines.

"Medallion" is made in a cylindrical case with a diameter of approx. 65 mm and 200 mm high. On the bottom there are six spring-loaded supports, with the help of which the mine takes a vertical position on the ground. Also on the side of the case there is a casing of the pin seismic target sensor. When the ammunition is cocked, the pin goes into the ground.

Split layout of the "Medallion". Photo Russianarms.ru
The target sensor receives ground vibrations and converts them into electrical signals. The electronic control unit of the mine processes them and compares them with signatures in memory. POM-3 is capable of detecting moving objects and isolating manpower. In addition, the distance to the target is approximately determined. It was reported that the mine will be able to distinguish military personnel from civilians. If the seismic picture matches the signature of an enemy infantryman, a command is given to trigger the warhead.

Mine electronics provides a number of new opportunities. Yes, non-recoverability is guaranteed. When moving or tilting the cocked ammunition, an undermining is performed. With the help of radio control, the operating time of the mine is set, after which it self-destructs. It is possible to change the operating time of a cocked mine or return it to the transport position.

POM-3 is equipped with a "jumping" fragmentation warhead with semi-finished submunitions and expelling charge. Fragments are formed by crushing gear-shaped rings, inside of which the main charge and fuse are placed. Before undermining the main charge, the warhead flies up 1-1,5 m up. Crushing fragments ensure the defeat of manpower, incl. with protective equipment, within a radius of 8-12 m.

It was reported that the Medallion mines are used with standard size KPOM-3 cassettes. Such cassettes are compatible with all modern mining equipment, land and air. Probably, POM-3 is also used in the cluster warhead of the ISDM "Agriculture" ammunition. When using old cassettes and barriers, the installation range is limited to tens of meters. Modern ISDM are capable of laying a minefield at a distance of up to 10-15 km.

The ways in which anti-personnel and other mines are used and the results they achieve are well known. Modern products POM-3 "Medallion" cope with these tasks. At the same time, a number of design features and equipment of such mines ensures the growth of certain characteristics and increases their overall potential. 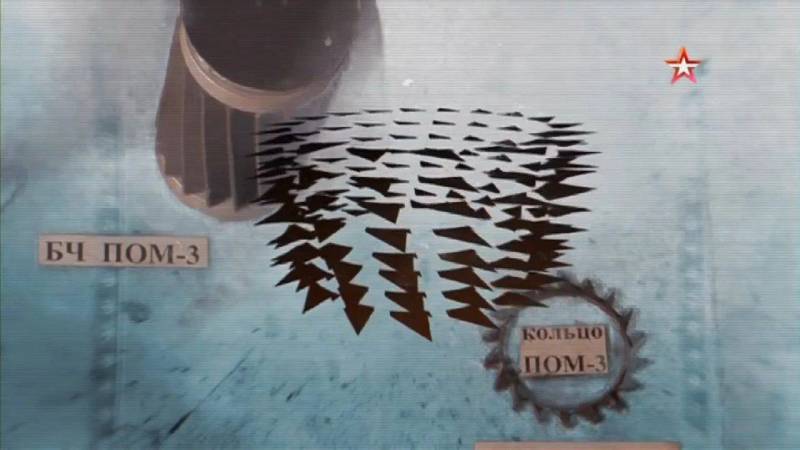 Visualization of the warhead. Graphics t / c "Star"
An important feature of the "Medallion" is the possibility of remote installation, incl. using the most modern mining systems. Due to this, the barrier with POM-3 can be organized in almost any area, incl. in territory occupied by the enemy. The sudden and rapid appearance of a minefield in the tactical depth of defense would be an unpleasant surprise for his troops.

The advantages of POM-3 over other mines of domestic and foreign development are achieved through a "smart" control unit. By ground vibrations, it determines the presence of a target and the possibility of its effective destruction. Thanks to this, the mine does not unmask itself with target sensor threads. In addition, the selectivity of the action increases, which affects the effectiveness and collateral damage.

The widest possibilities are provided by remote control of mines. Depending on the needs, the barriers can be reconfigured or turned off. In particular, this simplifies the clearance of the remaining barrier after occupying the relevant territory.

With all this, POM-3 poses a minimal threat to the civilian population and infrastructure. In this regard, the new Russian "Medallion" is much better and safer than any other mines, especially outdated models.

Judging by the last news, in the current Special Operation, the Russian engineering troops are testing in practice all the new developments that have come into service in recent years. In particular, advanced remote mining systems and ammunition for them are being used. One of these innovations is the POM-3 smart mine.

Products "Medallion" have a number of important differences and advantages over other anti-personnel weapons, and right now demonstrate them. According to known data, new opportunities are used to block enemy formations in the Kharkov region. The exact results of this application are still unknown. However, there is every reason to expect that POM-3 will show its best side.