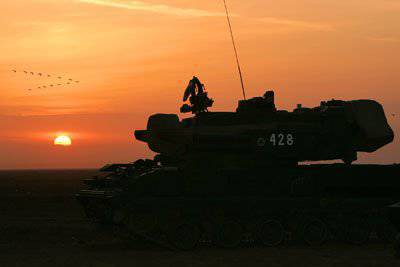 The end of the 60 of the last century is a period of great confrontation between the two superpowers, a period of exhausting arms race. The development of new types of weapons and military equipment is proceeding at a high rate. Microelectronics is developing especially rapidly and on its base telecommunications and computing equipment, which in turn was a powerful platform for the development of information management systems and control systems weapons.
The possible opponents of the USSR and the USA actively competed in the development of such systems. At the end of the 50 of the last century, the first ACS troops and weapons were Tacfire artillery units developed by Americans, Misail Monitor and rear units (CA-3).

The Director of the Design Bureau, and then FNIIAA and NIISA, the Chief Military Designer of the Front Control Command and Service “Maneuver” (from 1968) was appointed a professional military man, later Major General, a talented engineer Podrezov Yury Dmitrievich (1924-2001).

The main issues that need to be addressed when creating an automated control system for the “Maneuver” front were:
the creation of a system in its operational-tactical characteristics is not inferior to the best foreign analogues, and in some characteristics and superior to them, in the conditions of a significant lag in the USSR in the development of communications, computing equipment and general software, using only domestic components and materials, power supplies and life support;
• the need for the system to work in harsh climatic conditions (from –50 ° С to + 50 ° С), conditions of strong shock loads, intense characteristics of habitability and movement in the tactical level of control (division, regiment);
• the need to ensure the maximum unification of technical equipment, automated workplaces (AWP) to ensure the proper survivability of the system and the deployment of its mass production in the defense industry of the USSR, and later in the Warsaw Pact member countries;
• the need to provide very tough probabilistic-time characteristics of bringing information and the time of gathering information as a whole beyond the control link, which should have shortened the command and control cycle by an order of magnitude more than the existing non-automated system.

These and other problems and tasks were successfully resolved in the automated control system of the “Maneuver” front. During this period, many high-tech, corresponding to the best foreign analogues of the time, basic hardware and software necessary to create command and staff machines were developed, manufactured and passed all types of tests. For example, such as indicators of circular view, drawing and graphic machines, coordinate pickups, electro-optical tablets, consoles of the set of formalized codograms, various keyboards and boards for displaying information, data transmission equipment of different time scales and remote information input, switching equipment and operational communications, operating system software, database management.

Structurally, the basic technological and software tools are combined in the automated maneuver front automated control system into automated workplaces and installed at the tactical level — division, regiment (26 machines) into command-and-staff machines (CMM) and special machines (SM), and at the operational level — front and army (about 100 machines) to staff vehicles (CM). The MT-LBU self-propelled chassis was used as a transport base, and the Osnova body based on the Birthmark chassis, Ural-375, KP-4 trailers

The use of a systematic approach in the field of building distributed computing systems made it possible to organize distributed data processing and storage of data arrays in distributed databases. A systematic approach - the foundation of the GNAT Agat projects - made it possible to make optimal and unique software and hardware solutions that ensured maximum adaptation to changing user needs, compatibility of all system components and its subsystems, consideration of multiparameter functional subsystems, high-quality information processing in automated control systems severe restrictions on the amount of memory and computer performance with a positive result - the creation of an automated control system that is efficiently working in any external environment. Which approach led to control of troops, weapons, intelligence and electronic warfare is extremely reliable, survivable and operational. This was done on computer technology, which is significantly inferior in its characteristics to foreign models. The high reliability of the system was ensured due to the unification of the AWS equipment and the use of parallel algorithms (structural algorithmic redundancy) in information processing.

When designing automated control systems, it turned out that automatic control and automation systems should be based on completely new principles that had no analogues in the past, and for data-exchange systems of such scale and complexity, the basic fundamentals of building data transmission equipment were developed. The implementation of highly vibrant adaptive networks and communication systems could be tested to the extent necessary only at the Maneuver automated control system. The creation of a mobile automated control system required the solution of the main communication problem - the exchange of data between the control center and the control center. The volume of transmitted information has increased significantly, the time of its delivery has decreased, and the requirements for error-free data transfer for those times 1х10-6 were fantastic. It was necessary to create a new class of equipment that meets all the requirements for data transmission, operating in harsh environments (from -50 ° C to + 50 ° C), on the go, including and in armored vehicles.
The need to create data transmission equipment of three significantly different types was revealed:
• to transfer operational tactical information (GTI);
• for real-time data transmission (RMV);
• for remote entry of intelligence data (PD).

The task of creating an ADF for the transfer of OTI was entrusted to the Penza Electrotechnical Research Institute (PNIEI) and successfully solved by developing the T-244 “Basalt” (1972) equipment complex first, and then the T-235 “Redut” equipment complex (1985 g.). These unique complexes allowed building extensive data exchange networks and, by their characteristics, had no analogues in the world. The development of the ADF for the transmission of information RMV divided into two directions. The ADF for the country's air defense system was developed by the Leningrad PO Krasnaya Zarya with the scientific support of the Moscow Institute of Instrument Automation (AI-010 equipment).

The development of remote input equipment was also entrusted to NIISA and, for the radiation and chemical reconnaissance units, the Berezka equipment was first created (1976), and then the Sturgeon complex (1986).

The tactical unit of the maneuver ASUV is equipped with its own built-in mobile communications system, which provides all the necessary internal and external communications for the command center, from tone to digital. The security equipment of guaranteed resistance class was used. The organization of the telecode exchange system and data transmission equipment provided data transmission in any combat conditions (active and passive interference, protection against ionizing radiation, deliberate counteraction, etc.). The entire communications system was controlled from the headquarters of the communications commander and provided the opportunity to change the architecture of HF and VHF communications networks to the requirements of the combat situation.

One of the most serious scientific and technical problems of creating a tactical level of control of the front maneuver of the “Maneuver” front in the early 80s of the last century was the solution of the problem of suppressing industrial interference and ensuring electromagnetic compatibility during normal operation from 4 to 7 radio stations and receivers located in one crawler armored base, bringing the entire complex of automation equipment up to the given tactical and technical characteristics, first of all in terms of radio communication and normal functioning automation equipment. This task was successfully solved by a group of specialists from the institute.

When creating an automated command and control system for a tactical level, for the first time, the methodology of end-to-end design was developed and applied to create large integrated systems from the formal representation of the subject area in the form of a mathematical model to its implementation in technical, linguistic, informational and software.

In November 1981, the state tests of the “Maneuver” ACCS were completed and an act of the State Commission with positive results was submitted for approval. By decree of the Central Committee of the CPSU and the Council of Ministers of the USSR in December 1982, the tactical link of the Front Command and Command Administration "Maneuver" was adopted by the Soviet Army. NIISA was awarded the Order of the Red Banner of Labor, and the most distinguished industrial workers and military specialists (about 600 people) were awarded orders and medals of the USSR.

In 1988, the creation of an improved version of the tactical link of the AFC “Maneuver” front was completed during the 1989-1991 period. Separate prototypes of the advanced maneuver automated tactical and operational complexes for the front-end maneuvers were placed in a number of districts (BVO, MVO, DVO), the Military Academy of the General Staff of the USSR Armed Forces, the Military Academy. Mv Frunze, headquarters of the 5 th Army Arms.