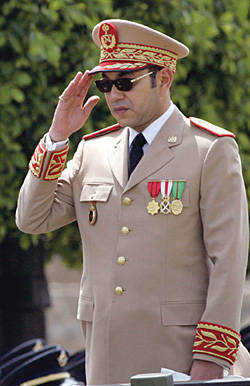 King Mohammed VI is not only the nominal supreme commander-in-chief, but also the real head of the Moroccan army.
Photo: Reuters

Moroccans have always been considered great warriors. For centuries, they opposed the European conquerors, and during the First and Second World Wars were part of the French army. The contribution of Moroccan soldiers to the defeat of the Italian fascist units in Libya in 1940, in the liberation of Marseille, the battles for Stuttgart and Tübingen is undeniable. On the margins of the Second World War, about eight thousand Moroccan soldiers died and tens of thousands were injured. More than a thousand Moroccans, five hundred of them posthumously, were awarded with French, British and American orders and medals.

The royal army of Morocco (CAM) arose in 1956, when the country gained independence and the sultanate that existed there gained kingdom status. It was then that the scattered guerrilla units of the Liberation Army opposing the French were put into corps, commanded by King Mohammed V (1909-1961) and General Mohammed Ufkir (1920-1972). It should be noted that General Ufkir was also the last defense minister of Morocco. After the attempted coup and attempted assassination of King Hassan II (1929-1999), son of Mohammed V, undertaken by the military in July and August, respectively 1971 and 1972, the attitude of the royal family to the army changed. Part of the funds earmarked for army needs were handed over to gendarmerie. All the warehouses with weapons. KAM combat capability has dropped dramatically. General Ufkir, who gave 16 on August 1972, was ordered to shoot down the plane in which the monarch was located, upon learning of the failure of the conspiracy, committed suicide.

Attempts of coups and assassinations forced Hassan II to pay close attention to maintaining loyal attitudes in the officer corps. By order of the monarch was developed a wide range of benefits for military personnel. Among the commanders, along with the Arabs, there were also Berbers. The most important promotion criterion was personal loyalty to the regime.

It should be said that in the second half of the last century, Morocco considered Algeria its main adversary. A serious conflict between the two countries flared up in the 1963 year, when both Rabat and Algeria declared their claims to the Western Sahara, after the departure of the Spanish troops from there. This war was called the “war in the sands”. In memory of her, the “army of sands” began to be called the royal armed forces of Morocco.

Today, the total number of KAM is approaching three hundred thousand. Today, in North Africa, only the Egyptian army surpasses the Moroccan army in terms of the number of troops. KAM is completed both on the basis of military service and on a contract basis. The term of military service on conscription is one and a half years. Officers are trained in the military infantry school, in the military and in the military medical schools. The highest military personnel is produced by the Military Academy of the General Staff, located in the city of Kenitra. Moroccan military schools also train personnel for most countries of French-speaking Africa.

The current King Mohammed VI, who is the Supreme Commander and Chief of the General Staff in one person, manages the armed forces through the administration of national defense (essentially the Ministry of Defense) and the general staff.

The basis of the KAM are ground forces (SV), the number of which reaches 160 thousand people. Organizationally, the Royal Guard and military formations of the Northern and Southern military zones belong to the NE. The combat strength of the SV includes motorized infantry and paratrooper brigades, motorized infantry regiments, tank, armored infantry, infantry, mountain infantry, armored cavalry and cavalry battalions, artillery and anti-aircraft artillery divisions. At the arsenal of the SV are tanks, field artillery guns, mortars, anti-aircraft installations and anti-tank weapons. The technique is mainly western-style. Various anti-aircraft missile systems - Soviet-made, and a number of artillery systems - Czech. In general, the weapons are quite outdated. Since the late 90s of the last century in Belarus, Moroccans bought used T-72 tanks.

It is significant that in 2009, Rabat refused to buy Chinese type-90-II tanks in favor of the American M-60-2. Production of overseas tanks of this series has long been completed, but Moroccans are hoping that the same Americans will help them with modernization. 2010 is expected to complete deliveries of the Belgian armored vehicles to the Moroccan army 102, the agreement on which was signed two years earlier. At the same time, Morocco does not exclude the purchase of armored vehicles of Russian production.

According to the Moroccan Ebdomader Journal, Rabat reacted with considerable suspicion to the “loud return” of Russia to the military market of the countries of the Maghreb region.

Moroccans believe that Moscow “historically favors” Algeria, which, thanks to Russian aid, may be ahead of Morocco in the arms race. In fact, Rabat is regarded by Moscow as an equally important partner than any other Arab state. Back in 2006, Russia expressed its readiness to supply the third generation infantry fighting vehicles (BMP-3) to Morocco. However, before the signing of the agreement, the case never came. In 2007, Moscow delivered deliveries to Rabat of the Tunguska air defense missile system.

Apparently, Mohammed VI is following the example of Egypt and plans to create a military industry in his kingdom, capable, above all, of producing ammunition and light weapons. This is only one reason that the new agreements on the supply of arms, military equipment and equipment from abroad Rabat concludes in principle a little. Another reason for this phenomenon is that the king is trying to change the practice of purchasing military goods. Mohammed VI has no doubt that his generals at the conclusion of such "contracts" receive multimillion-dollar "kickbacks". Therefore, he instructed the chief of intelligence and his personal friend, Yasin Mansuri, to develop such a procurement system under which kickbacks would be excluded. And yet, the king approved military supplies for the next two years from the United States, France, Russia, and the Republic of Belarus, worth 64 billion dirhams (7,5 billion dollars) in XNUMX.

Seven battalions of camel cavalry belong to the Moroccan navy. And although the great Arab medieval poet Abul-Allah al-Ma'ari wrote that "they hit the enemy with a reed spear," modern camel cavalry battalions are undoubted fighting units, which should not be considered only as exotic. Camels are adapted to life in the desert. Corny feet, unlike horse hooves, give them excellent terrain in the sand. And although these “desert ships” run reluctantly, they pass their 50 kilometers a day without getting exhausted.

Ordinary cavalry, if it appeared in the sands, was forced to carry not only provisions for soldiers, ammunition and water, but also fodder for horses. Camels can go without food and water for weeks. In combat, camels are also used to create "living fortresses". In these cases, animals, packs and saddles are laid on the sand in a certain position, behind which the fighters leading the fire are hiding. From the height of the camels is convenient to conduct reconnaissance. At the same time, their high maneuverability in any locality cannot be ignored. By the way, camel companies, in which the Bashkirs were recruited mainly as drovers, were also in the Russian army in the era of the Napoleonic wars.

At present, the command of the Moroccan Air Force is considering the possibility of acquiring Russian MI-35 attack helicopters and multipurpose MI-17 helicopters.

Moscow can assist Rabat as a launch service provider in connection with the desire of Moroccans (by the way, other countries in the region) to acquire their own Earth remote sensing satellites. Such spacecraft, which first appeared in 2007 in the arsenals of Egypt, Algeria and Morocco, may well be used for reconnaissance purposes. In this regard, it is impossible not to note that even at the end of 2006, Algeria, Egypt, Morocco and Tunisia declared their intention to develop atomic energy. Of course, for peaceful purposes.

In 2007, Libya joined these countries. Meanwhile, it should be borne in mind that a state possessing a certain potential of atomic energy can quickly switch to military programs.

According to information published in Le Tan, the Moroccan weekly, in 2009, Rabat signed a contract with Jerusalem worth over 100 million, according to which the Israelis would supply them with F-16 in-flight refueling equipment. Morocco and Israel plan to intensify cooperation in the military sphere against the backdrop of the intensification of Islamist terrorist groups and Iran’s nuclear ambitions. And this is despite the fact that Moroccan units as part of the Syrian troops participated in the Doomsday War in October 1973.

Unlike Egypt, Morocco does not have a unified air defense system. Virtually all air defense weapons are part of the Ground Forces and carry out tasks to cover the capital, administrative centers, oil fields, airfields and major military facilities. In August, 2000, Russia entered into a contract for the sum of 734 million dollars from Morocco, under which Rabat is to receive a few dozen of the Pantsir-1 STCM.

The naval forces of Morocco (about 7 thousands of sailors) are considered the best in North Africa. They consist of special anti-airborne units trained to organize defenses in the Gibraltar zone and combat surface and submarine ships in the coastal zone. It is noteworthy that the Moroccan Navy maneuvers to protect maritime communications together with the United States and other countries in NATO. The ship composition includes the frigate, patrol, tank landing and training ships, patrol boats, rocket boats, search and rescue ship and hydrographic vessel. Three-year training of naval officers is carried out at the Naval Academy in Casablanca.

15-th thousand gendarmerie and 2-th thousand royal guards are considered to be elite units of CAM, whose task is the personal protection of the monarch and his family. The gendarmerie can be considered an “army in the army,” because it includes mobile aviation groups, a boat division, a special-purpose regiment, two separate mobile squadrons, a “operational intervention” battalion, and three helicopter squadrons.

The Royal Guard, consists of a separate battalion, cavalry squadron and military orchestra, and is intended primarily for ceremonial events.