29 September 2012
25
“Future historians, after a thousand years, will try in vain to comprehend the secrets of our policy. They will never be able to understand how it happened, that the people who won, having something for the soul, were humbled to such a fall, letting down everything that they won as a result of immeasurable sacrifices and decisive triumph over the enemy. They will not understand why the winners were defeated, and those who put down weapon on the battlefield and prayed for a truce, now go to the rule of the world "
from Churchill's speech in the English Parliament 24 March 1937 of the year. 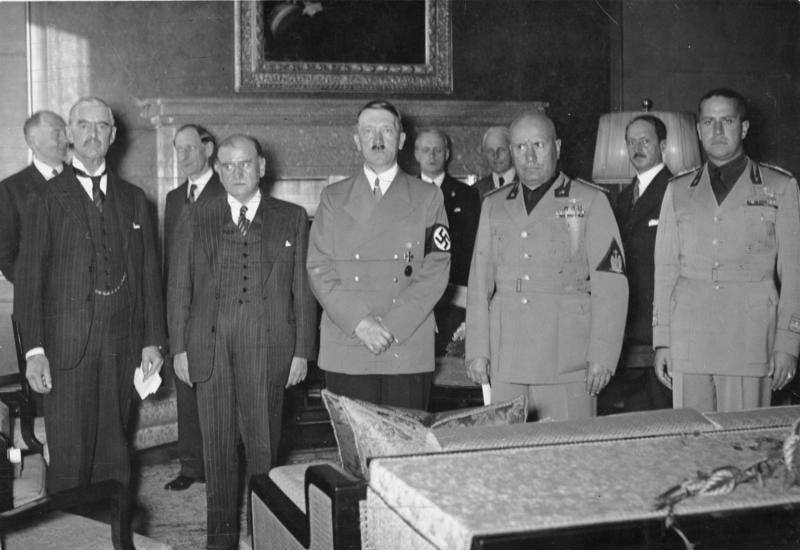 At the time of the signing of the Munich Agreement. From left to right: Chamberlain, Daladier, Hitler, Mussolini and Ciano

From the very beginning of his political activity, Hitler conducted active propaganda among the German population about the suffering and terrible living conditions of several million Germans living in the territory of Czechoslovakia in the Sudetenland (about 90% of the region’s population), Slovakia and Transcarpathian Ukraine (Carpathian Germans) and under the oppression of the Slavic population countries. The reasons for the emergence of Germans in this area date back to the 1935th century, when Czech kings invited settlers to deserted areas on the borders of the Czech kingdom. The situation began to worsen when Germany openly began to support fascist parties in the Sudetenland. One of them - the national separatist party Konrad Henlein - won the election in 7. The provocations and riots organized by this gang of Hitler’s henchmen heated the atmosphere in the Sudetenland, and the Czechoslovak government had to take a number of retaliatory measures (representing the Germans in the National Assembly, local government, and education in their native language), designed to reduce tensions in the region. But in April, the completely insolent party of Henlein in a threatening form put forward demands for the autonomy of the region. At the same time, German military units began to move, being located at the Czechoslovak border. In response, with the support of the USSR and France, Czechoslovak troops occupied the Sudetenland. Frightened, Hitler sends Henlein to negotiations with the Czechoslovak government, which, however, do not lead to anything and end on September 15 after a series of provoked riots and clashes between Sudeten Germans and regular troops. Hitler publicly declares that he sincerely wants peace, but if the Czechoslovak government does not withdraw troops from the Sudetenland, he will be forced to start a war. On September 50, Chamberlain meets with his mission to “save the whole world” in the Bavarian Alps. It Fuhrer convincingly argues that the territories in which more than 21 percent of Germans live, are obliged to go to Germany allegedly on the basis of the right of nations to self-determination. Chamberlain agrees, and Britain, and later France, are the guarantors of the new borders of Czechoslovakia. On September XNUMX, envoys of these great powers announce an ultimatum to the Czechoslovak government, which was received without a wish by President Edward Benes. After that, a general strike was declared in the country, protests and a change of government took place, a general mobilization was announced. From Sudeten begins the flight of Jews, Czechs and German anti-fascists. Even without the support of France, the USSR declares its readiness to fulfill its obligations to protect Czechoslovakia. There are official documents that Moscow offered Prague very specific assistance plans for the use of ground forces and the transfer of fighters in order to strengthen the capabilities of the Czechoslovak military aviation. There are infantry divisions on the southwestern and western borders, tank units, aircraft and air defense forces of our country were put on alert. But here Poland said it would not let parts of the Red Army through its territory, warning of a strike on the flank in the event of the advance of Soviet troops and the destruction of any aircraft flying over its airspace. The decisive factor was the refusal of help from Czechoslovakia itself, which, obviously, Stalin inspired no less concern than Hitler.

It is also known that Britain and France put pressure on Czechoslovakia: “If the Czechs unite with the Russians, the war can assume the character of a crusade against the Bolsheviks. Then the governments of England and France will be very difficult to stay away. "

Seeing the mobilization of the Czechoslovak military, Hitler informs the ambassadors of Britain and France that he is being forced to start a war. Continuous columns of soldiers armed from head to toe march darkly through the streets of Berlin. 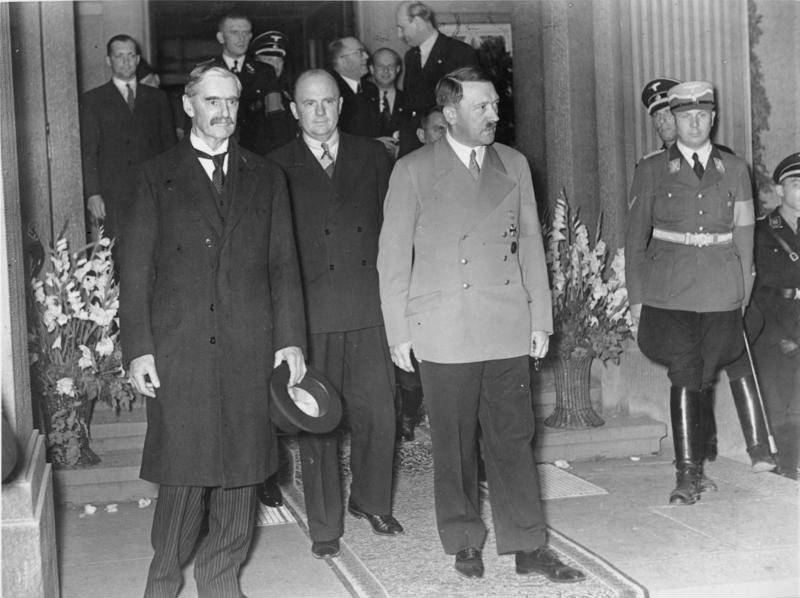 Chamberlain (left) and Hitler at a meeting in Bad Godesberg, September 23 1938. In the middle, the main translator Dr. Paul Schmidt

On September 26, in the Berlin Sports Palace, the Führer declared: “If by October 1, the Sudetenland will not be handed over to Germany, I, Hitler, will go, as the first soldier, against Czechoslovakia.”
Here he proclaimed: “After the Sudeten-German issue is settled, we will not have any further territorial claims in Europe ... We do not need Czechs”.

Chamberlain immediately assures Hitler that everything will turn out this way "without war and without delay." To address this issue 29 September 1938, the heads of the governments of Germany, Italy, Great Britain and France (Hitler, Mussolini, Chamberlain and Daladier, respectively) gathered in Hitler’s Munich residence of Führerbau.

September 28 held an emergency meeting of the British House of Commons. Chamberlain addressed the Chamber: “I have to make an additional message to the Chamber. Mr. Hitler announces that he invites me to meet him tomorrow morning in Munich. ” Members of Parliament who dreamed of a treaty with Hitler, greeted this statement with loud applause.

In 12 hours 45 minutes in the Brown House opened a conference of plenipotentiaries. Contrary to the promise to Chamberlain, the envoys of Czechoslovakia were not allowed, and the USSR was generally denied participation. During the two-day talks, the fate of Czechoslovakia was finally decided. Its representatives were invited and sentenced in a “recommendatory” form - to pass the Sudetenland and the regions bordering the former Austria with all property, including weapons and fortifications, to Germany. The transferred territory Czechoslovakia should have cleared in time from 1 to 10 in October. The agreement also prescribed the settlement of the question of the Polish and Hungarian national minorities in the country, which meant the rejection of Czechoslovakia of other parts of its territory in favor of Poland and Hungary. The Munich Agreement was signed at one o'clock in the morning on 30 September 1938 by Hitler, Chamberlain, Daladier and Mussolini. Vojtech Mastny and Hubert Masarik, on behalf of the Czechoslovak people, also pushed the agreement. In the event of its failure, France disclaimed all responsibility for defending Czechoslovakia against German aggression.

Returning from Munich to London, Chamberlain at the ramp said: "I brought the world to our generation."
Daladier was already met at the aerodrome by a huge crowd shouting: “Long live Daladier! Long live the world! ”
Churchill was completely different about the outcome of Munich: “England had to choose between war and disgrace. Her ministers chose to shame, and then get a war. ”
Welcoming Chamberlain in the House of Commons, Churchill sullenly said: “Do not think that this is the end. This is only the beginning of retribution. This is the first sip. The first anticipation of that bitter cup, which will be brought to us year after year. ” 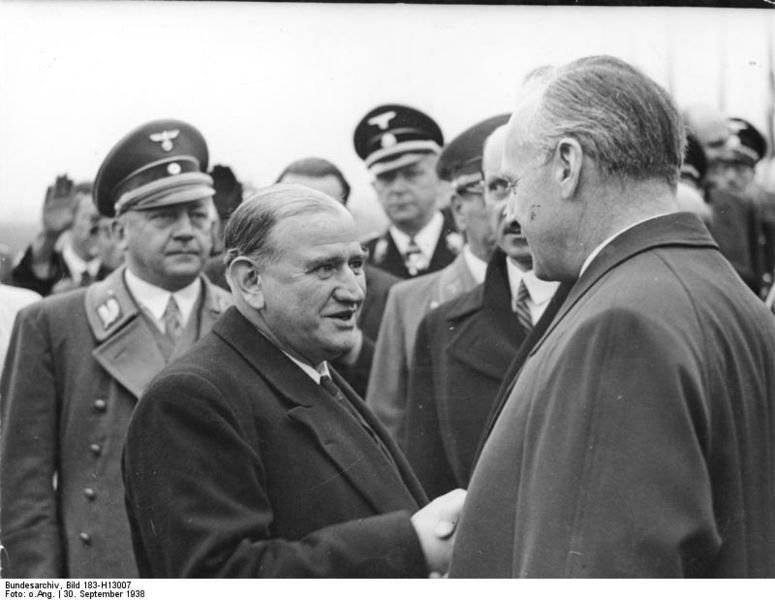 The Munich Agreement was a model example of betrayal committed on a national scale, and the culminating point of the British "policy of appeasement." The French could easily mobilize the army in order to expel the German units from the Rhineland within a few hours, but did not. Everyone wanted Germany to move eastward, attacking, in the end, our country.

The French ambassador in Moscow, Robert Coulondre, noted: “The Munich Agreement is especially threatening the Soviet Union. After the neutralization of Czechoslovakia in Germany, the path to the southeast is open. ” The same is said in the diplomatic documents of France, Germany, Italy, the USA, Poland and a number of other countries.
The slogan of the English conservatives at the time was: "For Britain to live, Bolshevism must die."

On the Sudet territory after 1 in October 1938, Czech parties, Czech language, books, newspapers and more were banned. Under German pressure, the Czechoslovak government on October 7 recognized the autonomy of Slovakia, and on October 8, it was concluded that the autonomy of Transcarpathian Ukraine would be granted. Even earlier, on October 1, Poland presented Czechoslovakia with ultimatum, supported by the Nazis, about the transfer of the Cieszyn region to it. Thus, a split, devoid of frontier fortifications and an economically bloodless country turned out to be defenseless against the German fascist invaders. In March, 1939, the Nazis began the final elimination of Czechoslovakia as a state. The Czech President Gaha, summoned to Berlin on the night of 14 on 15 March, signed Hitler’s statement on preventing any resistance to the invasion of German troops.

On the same day, Hitler declared: "I do not boast, but I must say that I did it really elegantly." 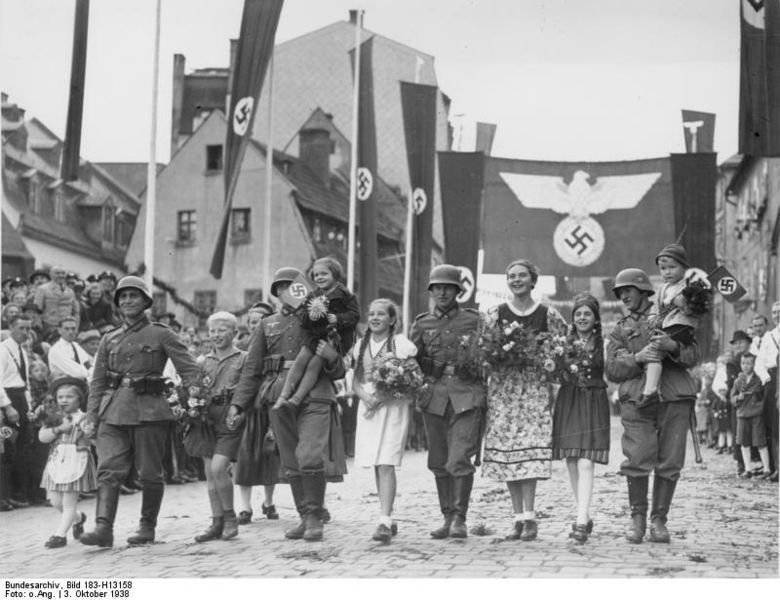 3 October 1938 of the year. "National festivities"

March 15 German troops occupied the remaining of the once united Czechoslovakia Bohemia and Moravia, declaring a protectorate over them. The Germans did not take any measures to keep their actions secret, but there was no protest from the Western powers.

Chamberlain only answered all questions: "Czechoslovakia ceased to exist as a result of internal disintegration."
Daladier demanded to suppress the protest of the Communist Party. The plenipotentiary plenipotentiary of the USSR in France wrote: “The majority of the chamber responded to this demand with a thunderous ovation. It was difficult to imagine a more shameful spectacle ... ".

The Soviet Union was the only country wishing to help the Czechoslovak Republic. But this time the ruling circles of this country did not accept our support.

The Soviet government declared: "We cannot recognize the inclusion of the Czech Republic into the German Empire, and in one form or another also Slovakia, legitimate and in accordance with generally accepted norms of international law and justice or the principle of self-determination of peoples."

As a result of the occupation of Czechoslovakia in the center of Europe, one of the forces that could potentially serve the cause of defeating the fascists disappeared. When Hitler visited this “new territory of the Reich”, he expressed joy at the fact that the Wehrmacht did not have to go on assault on the lines of the Czechoslovak defense, for which the Germans would have to pay dearly. From a military point of view, Germany’s gain was huge. The Wehrmacht acquired excellent army weapons and factories producing these weapons, and after all the industry of Czechoslovakia was at that time one of the most developed in Europe. Before the attack on the USSR from the 21 tank division of the Wehrmacht, 5 were equipped with Czechoslovak production tanks. Germany also received all the trump cards for attacking Poland from several directions, which, until the very end, made herself an ally of Germany and paired up Czechoslovakia merrily with it. But after a few months, Poland was gone, and the Slovak soldiers were photographed against the backdrop of burnt houses and Polish prisoners of war.

The Munich model did not work. The war began in the West, culminating in the disgraceful capitulation of France, the change of cabinet in England and the formation of the anti-Hitler coalition according to the scheme proposed by the Soviet Union as early as 1935. It included the thoughtful of England, a little later the United States, and then France jumped on the steps of the departing train under the leadership of de Gaulle. In 1942, the United Kingdom and France, in 1944 Italy, in the 1950 GDR and in the 1973 of the FRG, the Munich Agreement was declared initially null and void.