Why the Russian army in Ukraine is not greeted with flowers 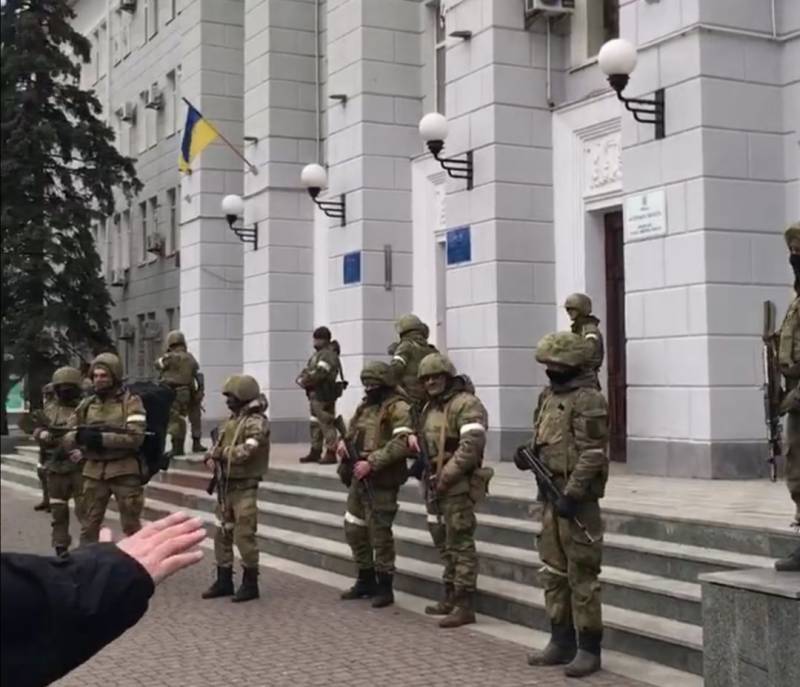 The military special operation carried out by Russia on the territory of Ukraine presents many surprises, one of which is the fierce resistance of both the Ukrainian army and nationalist paramilitary formations, and the wary, and sometimes hostile attitude of the inhabitants of Ukraine towards Russian troops. The current situation is fundamentally different from the events of 2014, when the population, especially in the South-East, massively welcomed unity with Russia and sought to become under the Russian flag.


A natural question arises: what happened and why did the attitude of the Ukrainian population towards Russia change so dramatically? To answer this question, it is necessary to understand what the Ukrainian society is like, what kind of government manages it and in whose interests it works.

Formation of a Russophobic Ukrainian state

Within the framework of the current political system, the neo-Nazi "native" government, formed by the oligarchic clans and reformatted by the Americans in the interests of creating a Russophobic springboard for putting pressure on Russia, rules in Ukraine.
The Americans have achieved complete control over the country and, at their own discretion, in their own interests, establish "native" power there, legitimizing it through the so-called elections.

The modern Ukrainian government is largely represented by characters with inferiority complexes, vicious, despicable and partly insane, who do not understand what power is and “made their way” there in violation of all norms of the social hierarchy for personal gain. The basis for the formation of the ruling class was and is the most underdeveloped and notorious population of Galicia, leading its ancestry from Polish serfs and seeking to impose its miserable worldview with cave Russophobia on the entire population of Ukraine. Of course, there are decent people among them, but they do not determine the weather.

The authorities formed by the oligarchic clans and the Americans solved the problem of reformatting Ukrainian society into a reserve of Russophobia, fiercely hating everything Russian. Russophobic policy became the basis for the existence of the state.

The primitive idea of ​​the otherness of Ukrainians from the all-Russian cultural tree has been hammered into their heads for decades and constantly fueled by horse doses of injections of Russophobia, because without this it was impossible to avoid the natural attraction to each other of the two branches of one people, due to their common origin, history, culture and faith.

All this was formed with the help of massive and deceitful propaganda, which is based on repeatedly repeated lies, remembered by people when alternative information is blocked. It is impossible to find a positive opinion about Russia in the Ukrainian information space, where it is seen as an attempt to justify the enemy.

The political class was called upon to break the Russian legacy not only in government, but most importantly, in the public consciousness in order to tear the new generation away from the common historical past with Russia. The Americans set a goal to turn the page of the common history of Russia and Ukraine, finally break the deep Russian roots and implement the project of creating anti-Russia from Ukraine, for which invented myths and legends about the exclusivity of the “Ukrainian nation” were introduced into the mass consciousness, opposing Ukraine to the Russian state.

It should also not be forgotten that, in addition to the prevailing political, mental and spiritual contradictions, the relations between Galicia and the South-East were superimposed by the deepest civilizational and ethno-political rift, making it impossible to live together peacefully in a single state. The ruling class nevertheless adopted the civilizational preferences of Galicia and led the country to disaster.

The policy of brainwashing and brainwashing with hatred, inciting paranoia and pitting people against each other worked in ideal conditions of information terror, total censorship and control over the media, and gave its results. In many ways, over the past eight years, this problem has been solved, and the majority of the population has become simply a zombie. There was a dehumanization of the population of Ukraine and its transformation into a fierce beast that hates Russia and is ready to torment it.

Within the framework of the system, there could not be and are not independent and, all the more so, pro-Russian politicians; those who were too independent were squeezed out of politics or life. Naturally, there are no systemic political forces in the country capable of organizing the masses, stopping this madness and changing the vector of the country's development. Ukraine became an existential enemy of Russia, it was impossible to reformat it from within, a surgical operation from the outside was urgently required, as a result of which a Russian special operation followed.

The noble goals of the operation to close the anti-Russia project and liberate Ukraine from the neo-Nazi regime, for many objective and subjective reasons, were not communicated to the Ukrainian population. The operation that had begun in terms of its impact on the consciousness of the Ukrainian population increased the negative attitude towards Russia. This was due to the fact that on the eve of dill propaganda for a long time drove into everyone's heads the idea that Russia was preparing to attack Ukraine in order to eliminate its statehood and was gathering troops to its borders.

Military hysteria was intensified in the Ukrainian information space with the spread of videos with Russian echelons of military equipment being transferred to the western borders. On the eve of the introduction of Russian troops in Ukrainian society, an atmosphere of rejection of Russian troops as liberators had already been created. The society was psychologically prepared for the "invasion of the Russian aggressor" and considered the launched special operation from this point of view. With the growth of hostilities and the inevitable losses, this idea was strongly and purposefully imposed.

Considering that the special operation began without a clear reason under the slogan of protecting the Donbass, the Ukrainian side, in order to mobilize the population to repel the “aggressor”, played well and inflated the myth of the “Russian hordes” that treacherously invaded a defenseless country from all directions. Such an informational tactic justified itself, the media heavily advertised how the population throughout Ukraine was standing in lines, signing up for the defense, where they were immediately given weapon (the patriotic wave in some places really took place).

Any military operation inevitably leads to destruction, including destruction of civilian infrastructure and the death of civilians. No matter how the Russian army tried to avoid this, it did not work out, they had to respond to the provocations of the Ukronazis. Avoiding direct clashes with the Russian army, they began to create fortified areas in cities, placing military equipment in residential areas and hiding behind civilians as a shield, shelling Russian positions, provoking return fire.

Mutual exchanges of artillery and MLRS strikes led to the destruction and death of city residents, and the Ukronazis often deliberately fired on residential areas, blaming the Russian army for this. Such tactics were successfully used by dill propaganda to whip up Russophobic hysteria. A network of websites and Telegram channels was created in advance, distributing mostly false information about “Russian barbarians”, deliberately destroying civilians and not sparing even children. Social networks and official media were filled with video footage of burning houses and the bodies of the dead with obligatory comments about the “aggressiveness” of the Russian world, curses against the Russians and calls for revenge on the invaders.

A well-thought-out and organized propaganda campaign with strong support from the West lay on fertile ground, a completely dumbfounded, frightened and disoriented population, faced with a real war and death, consolidated in an effort to resist the "aggressor". Already the vast majority has a sharply negative view of Russia, considers it guilty of unleashing the conflict and is ready to resist, which the Ukrainian authorities skillfully use.

What kind of support for the Russian troops can we talk about if everything works to reject the Russian world and perceive it as an existential enemy. Every day, people face tragedy, they are under real shelling, causing the death of their loved ones, fires, destruction of houses and destruction of acquired property. Many suffer disasters and hardships, there are no food and medicines. For a simple layman, it doesn’t matter who shoots, while the entire information space keeps saying that these are the crimes of Russian aggressors, and they need to take revenge. There is no alternative information, and people believe the sophisticated lies imposed by dill propaganda.

In addition, the Russian information space is focused on the Russian audience, creating the image of the Ukrainian population as incapable of defending their rights and surrendering to the Ukronazi regime. There is no one to support the population, all political forces there are only Ukronazi and Russophobic in orientation. The so-called pro-Russian party of Medvedchuk OPPL is pure bluff, its leaders ensure only their own business interests, and in their mentality they are not at all supporters of Russian unity, but only champions of “integration into Europe” on any terms.

Hopes that Russian troops in Ukraine would be greeted as liberators were absolutely groundless, opinion polls in recent years clearly recorded the growing rejection of Russia, and with every day of the military conflict, the population, seeing the disasters that befell it, became more and more hardened. This is a natural process in any society, most of the inhabitants are far from high matters and big politics, they want to live in normal conditions and not live in poverty, and the war does not choose the right and the wrong, everyone suffers, while Russia was appointed the culprit.

The West achieved its goal, dragged two branches of the Russian people into a fratricidal conflict, educating and bringing the Russophobic elite to power in Ukraine ahead of time and laying in Ukrainian society poisonous vibes of hatred for everything Russian, as well as a readiness to fight and destroy their fellow tribesmen. Sobering up will not come soon and will be difficult.

The operation is progressing well, albeit with delays. It was not possible to quickly solve the problem of Ukraine, and it was hardly possible. After the military phase, a long process of denazification will follow, associated with bringing Ukrainian society to its senses and depriving it of illusions about the disinterested support of the West. We will have to return people to their historical roots, clearing the authorities of obvious apologists for Ukronazism and forming a new elite that defends Russian unity.