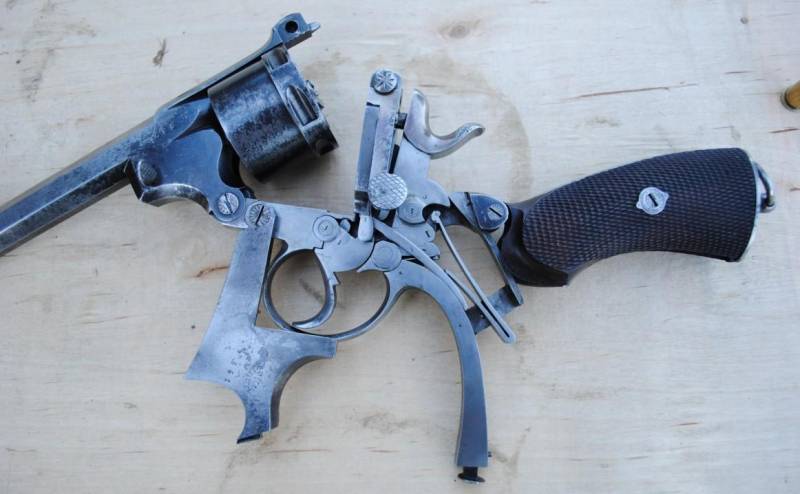 The revolver of Philippe Kuhne, a gunsmith from Liege, could unfold completely. For cleaning and lubrication it was convenient

"How beautiful it is - a man who desires the strange!"
"Escape Attempt" Brothers Strugatsky
History firearms weapons. When a person “desires the strange”, one can relate to this in different ways, and the “desires of the strange” themselves can be very different. Well, we will not touch on public life, the devil himself will break his head with strange desires, but with regard to technology, why not look at some of these desires and their embodiment in metal. Especially when it comes to weapons. And not just weapons, but firearms. And not any firearms, but ... revolvers. And all because we have such a topic now, and we have to somehow group these same revolvers so that they can be compared. 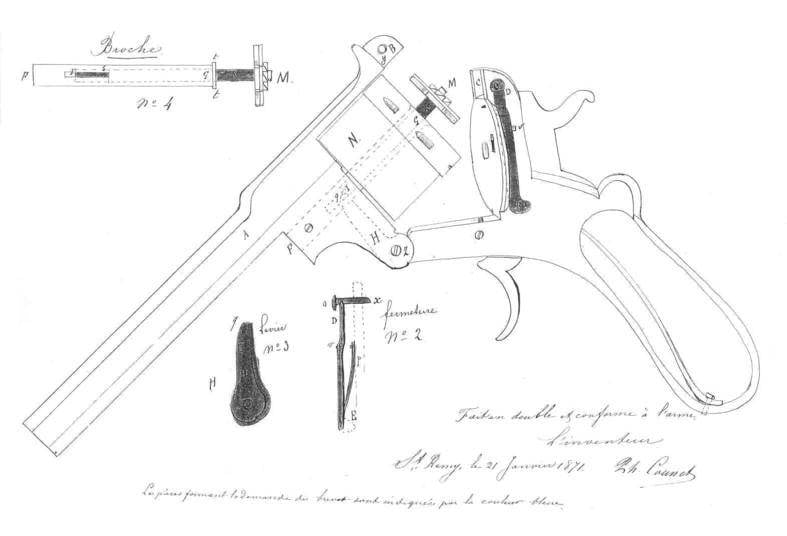 Philippe Kuhne's revolver mechanism
Therefore, today we will consider not one revolver, but several at once. But what they have in common is that they all fold out for loading. Here we deviate a little from the topic and recall our Russian-Belgian "Nagant" and how long and tediously it was loaded through the "Abadie door". And there were a lot of such, in fact, “disposable revolvers”. But both before and after the revolver, there were just as many designs, the authors of which tried to do everything possible to speed up the process of loading and unloading as much as possible. 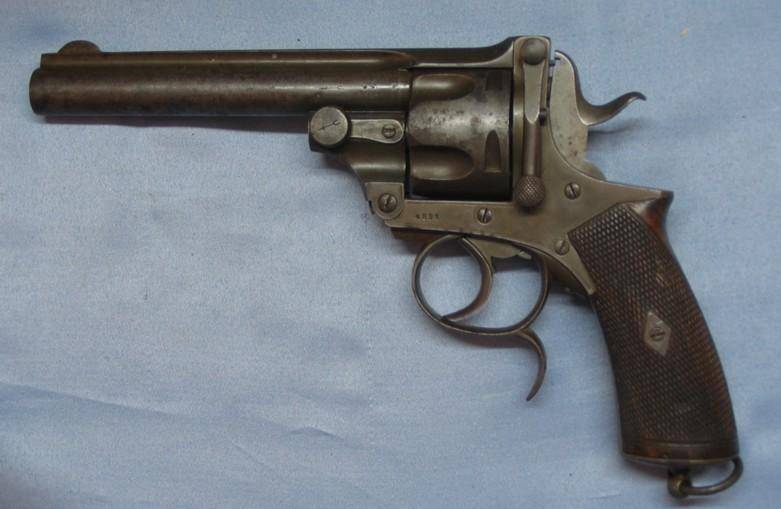 Kuhne's 1876 revolver in .500 caliber!
Perhaps the simplest design of such a revolver was proposed by Ebenezer Starr, in which the upper part of the frame was connected to the upper ordinary screw. The Smith and Wesson design was very popular, having a mount at the top of the frame, and the Webley and Scott revolvers had a very similar mounting system. But what about those gunsmiths who, for some reason, did not want to pay for the use of the patents of these firms? They had to invent something of their own, and it was here that they tried, desiring and creating, out of necessity, "a lot of strange things." 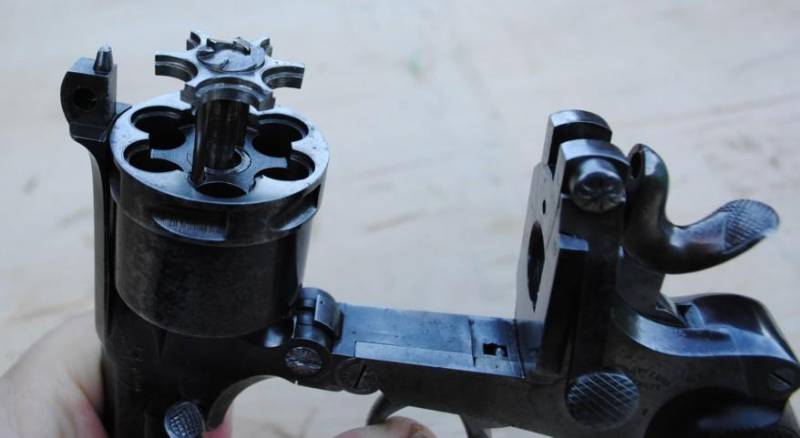 And this is how it unfolded for reloading. Just like Smith and Wesson
Let's start with the Belgian revolver of the Liege gunsmith Philippe Cunet. He patented his revolver in 1876 and produced several different models in calibers 320 - 380 - 450 and even 500 (12,7 mm)! The revolver was double action, with a detachable frame at the top and simultaneous extraction of all ammunition. At the same time, he, perhaps, laid out more than anyone else, since almost all the details of the frame and even his handle were fastened to each other with screws. 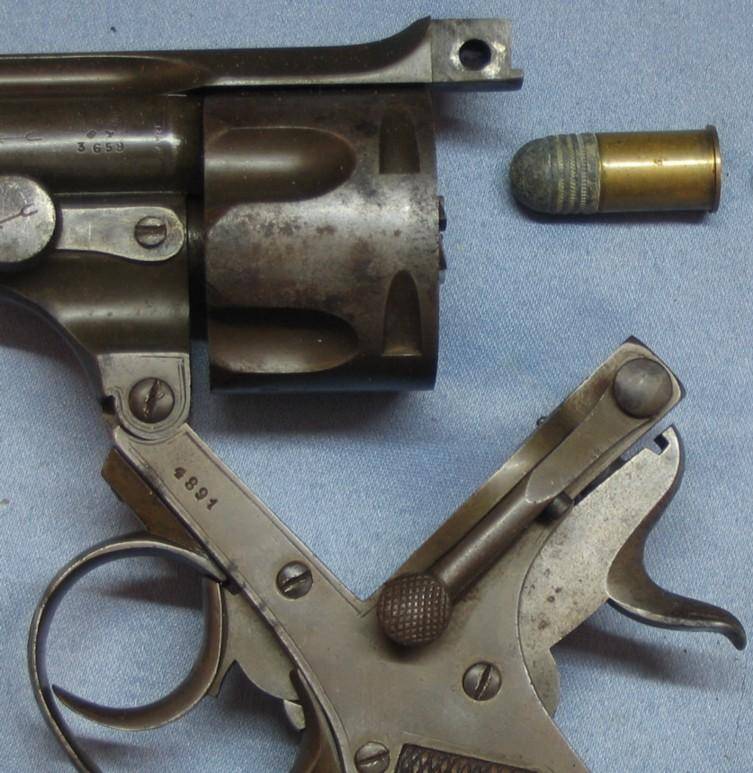 Kuhne revolver and cartridge for it in .500 caliber 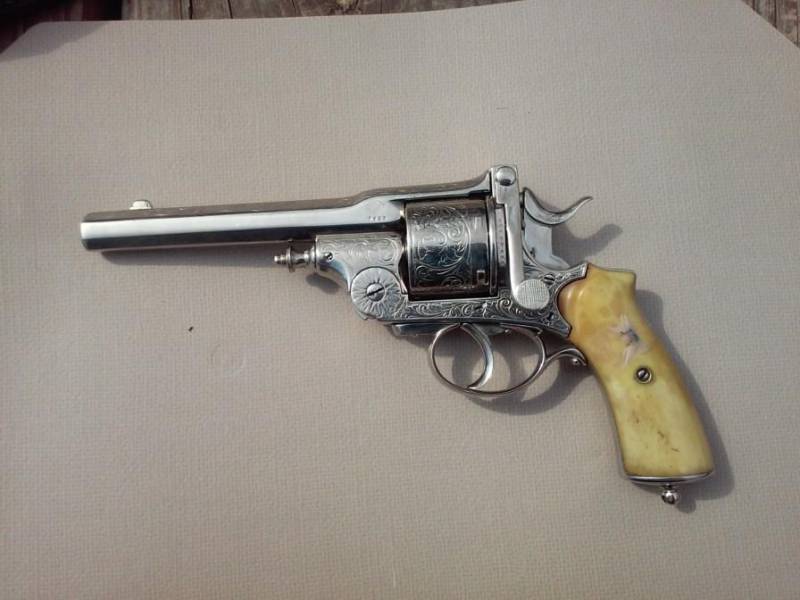 Revolver Kuhne 450 caliber with bone plates on the handle. Like all other revolvers of this designer, the frame is opened by pressing the "pedal" on the left - a scheme patented by him in 1871
The patent for this mounting device itself belongs to Bayet Freres, which is indicated on the revolver by the corresponding inscription. Identical revolvers signed by Auguste Francotte were seen. However, it was Kuhne who received the original patent. 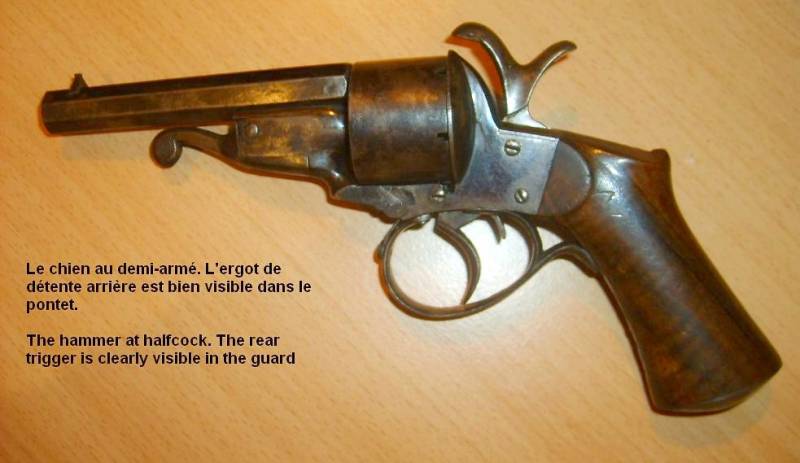 “On February 20, 1856, British Lieutenant Frederick Beaumont of the Royal Engineers received an English patent relating to improvements that allow the use of Adams revolvers in single or double action. Until then, Adams' superior revolvers were only double-action, allowing his competitors to emphasize their lack of accuracy. Then, on June 3, 1856, Beaumont received a patent for the same improvements under the number 15.032 also in the United States.

The Beaumont system had a huge impact on the market, and allowed Robert Adams to return British revolvers to the market, but Samuel Colt was forced to close his London branch after their release due to a sharp drop in sales of his revolvers. With beautiful finishes, a solid frame, the Beaumont system, and a new ramrod patented by Kerr, the Beaumont-Adams revolver has become superior to the 1851 Naval Model Colt revolver.

Moreover, based on the US patent

“The Massachusetts Arms Company was licensed to manufacture about 19 of these revolvers, of which about 000 were purchased by the northern army at the very beginning of the American Civil War. It can be said that the story with this revolver was probably the biggest commercial failure of Samuel Colt in his entire business career. 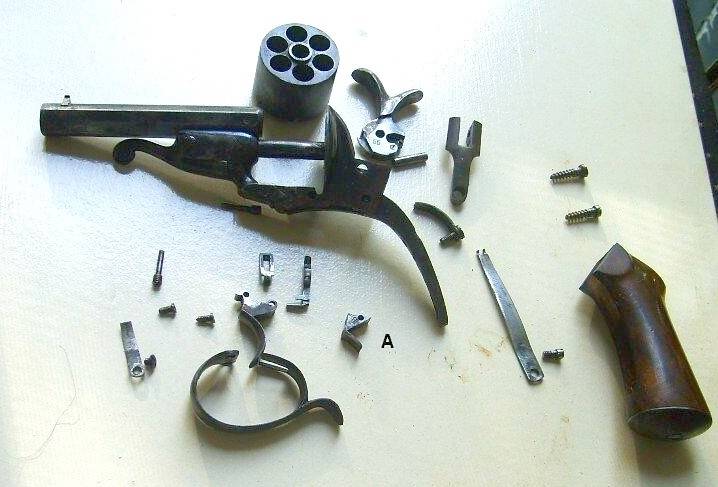 Javel revolver completely disassembled into parts
As for Javel, he decided to improve Beaumont's system and made some personal improvements to his original mechanism. First of all, he also equipped his revolver with two triggers, modeled on the Starr revolver. And now, in order to turn the drum and shoot, it was necessary to completely squeeze the first trigger, and after it the second one. But it was possible to put the revolver on a safety half-cock and, by lightly pressing the second trigger, fire a shot with much greater accuracy. 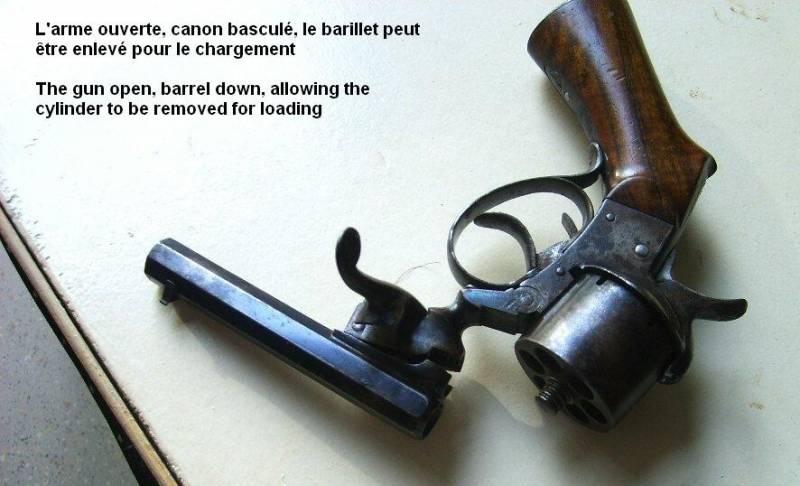 Javel's revolver unfolded for reloading
In addition, Javel's revolver was also very interestingly laid out with a special lever under the barrel, which had to be turned for this. At the same time, the barrel leaned back, and ... then it was possible to manually remove the drum, reload it and put it in place. Or replace it with a pre-equipped one. Very simple, but also very controversial solution!

In the Belgian city of Liege, there were many weapons enterprises where very gifted people worked. And so one of them, a certain Gerard, received a patent for the original revolver system, which another gunsmith Jules Kaufman began to produce. Interestingly, this revolver, often referred to as "brazilian model”, served successfully in the Brazilian army in the 1880s. 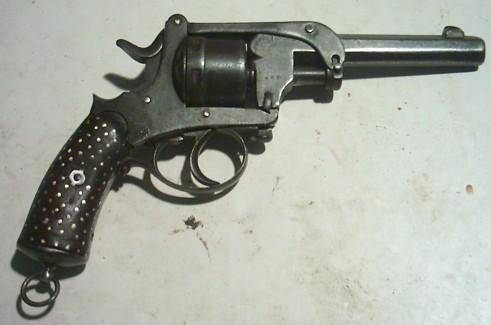 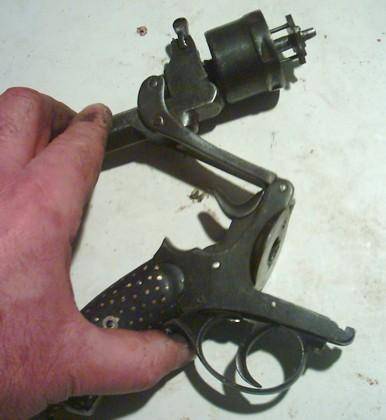 A lever is mounted on the barrel, the back of which is held by a screw on the barrel hinge, and the front part moves along the barrel during opening. When the barrel is fully retracted, the front of the staging presses against the cylinder head, causing the star extractor to come out and eject the empty cases. Pressing a little more will cause the star ejector to return to the closed position, allowing the drum to be reloaded.
This ejection system is a variant of the one used on the American Model 3 Smith & Wesson and the British Webley revolvers, which were very popular in those days, especially among cavalrymen. However, it is more complex, numerous hinges and axles, with all evidence, cause premature wear of the rubbing parts. In addition, a large number of components makes this weapon expensive to manufacture, but for some reason the Brazilian military was not afraid of all these "difficulties". 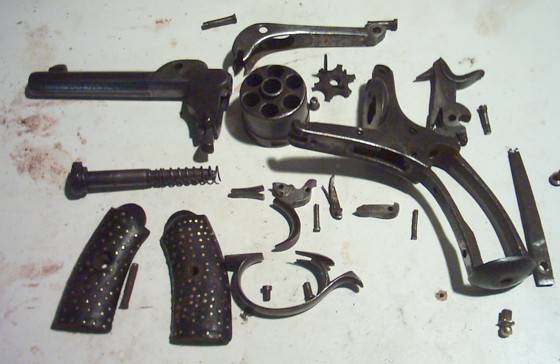 Revolver completely disassembled
No, after all, it’s not without reason that it is said that it’s difficult to do it is very simple, but to do it simply is very difficult!

But the revolver of a certain M. Dozin from the USA has an absolutely amazing mechanism, and this is the least that can be said about him! In the photo, it does not look particularly original, well, except that it uses a folding trigger. 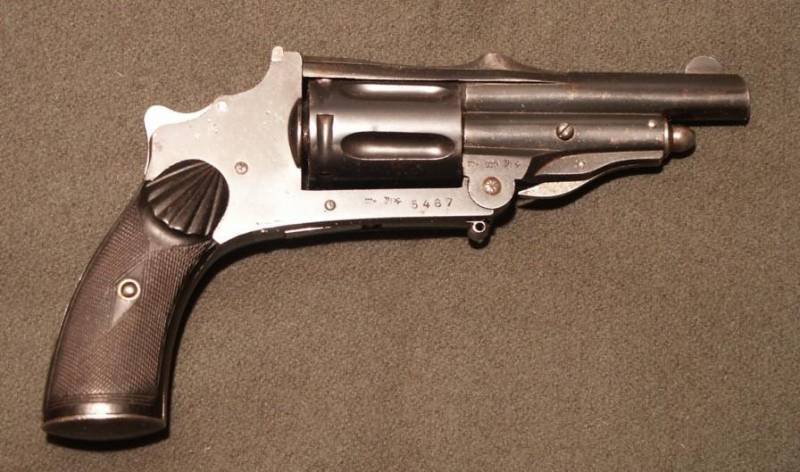 Revolver M. Dozin. What to look at on the right, what on the left - the view is the same 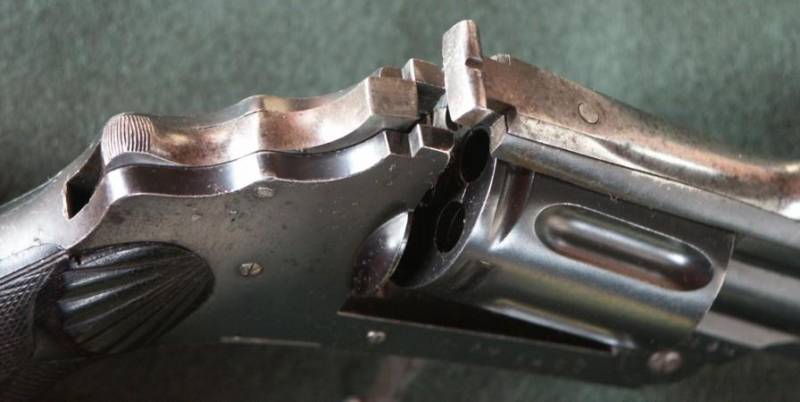 In this photo, you see a revolver trigger that seems to be half-hidden in a frame, but in reality it is not a trigger at all. By pressing the corrugated protrusion of this "trigger" we raise ... the spring-loaded fastening of the hinged part of the frame together with the barrel. That is, the frame on the revolver is detachable, but in order to recline it, you need to press it. Moreover, the T-shaped mounting plate (a slot for aiming was also made on it!) Is screwed to the barrel from above!

Here it is this ingenious spring! 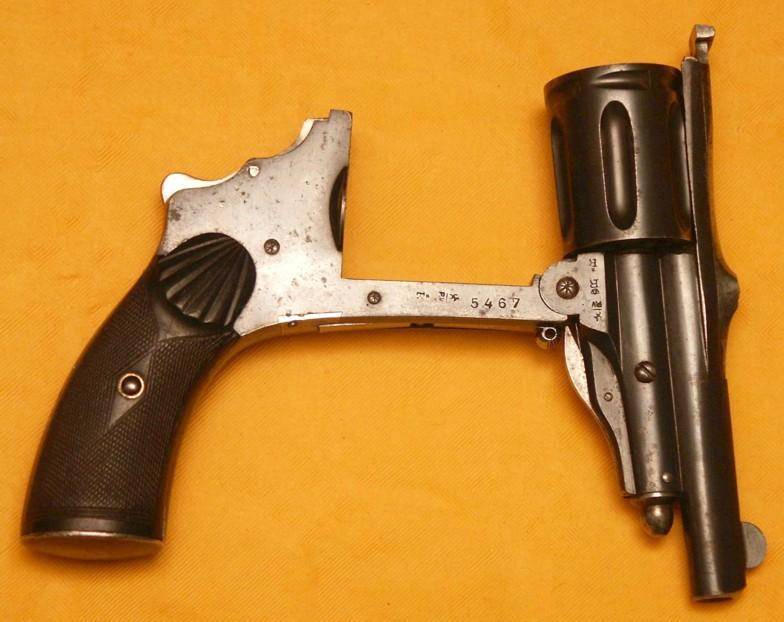 The upper part of the frame folded down for loading

A slightly curved key is visible under the barrel. As soon as you press it, the extractor will immediately move out of the drum. The real trigger is in there somewhere. You can't see it from the outside!
But two English gentlemen William Moore and William Gray were preoccupied with the idea of ​​how to quickly unload a revolver chambered for centerfire with an Abadi door. And they came up with! They put a lever with a pusher on the barrel. All this is very similar to the old primer primer revolvers. But in fact, this device works a little differently. Rather, it works in the same way, but only pushes spent cartridges out of the drum! 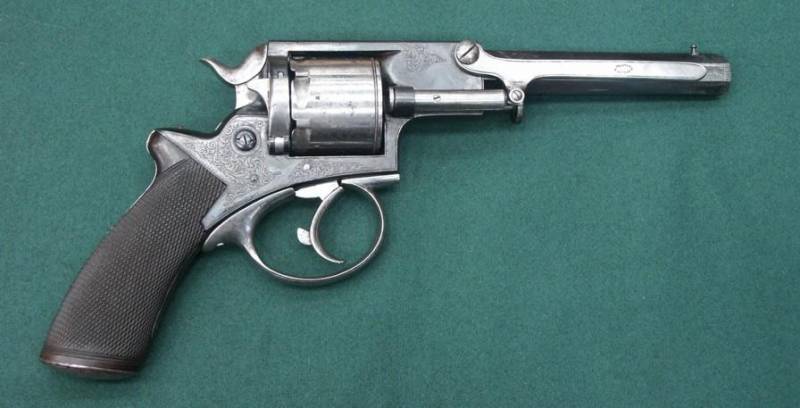 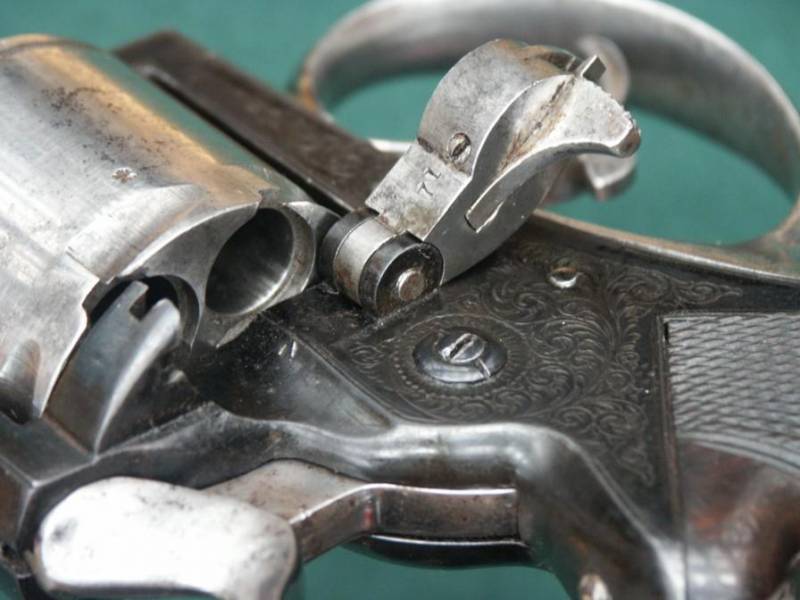 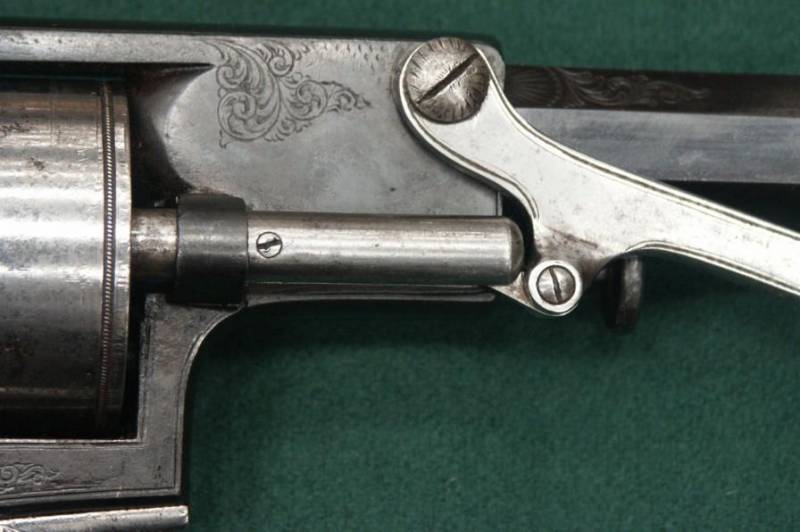 This was an age of innovation in firearms, and it is not surprising that his employee Henry Schlund received patents for the original revolver, which was a curious mixture of both modern and obsolete technical solutions, with a fully closed hammer and a double-lever platoon of percussion trigger, very similar to earlier Tranter revolvers. 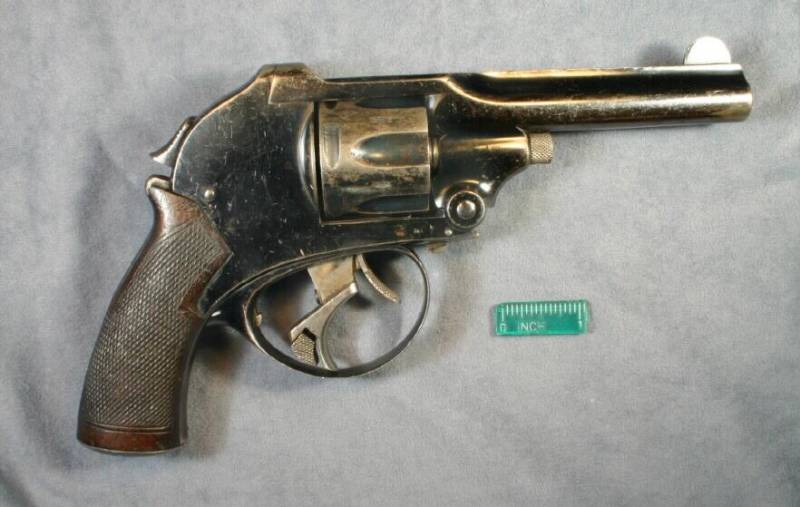 Second model in .380
On the earliest models, which were made only in .455, the cocking lever protruded below the trigger guard, while on later models, which were made in both .455 and various smaller calibers, the cocking lever and the trigger was inside her. By pressing them simultaneously with two fingers, the revolver could be fired self-driving, or it was possible to first pull the lower lever back and thus cock the hammer, and then press the front trigger with a very light touch. 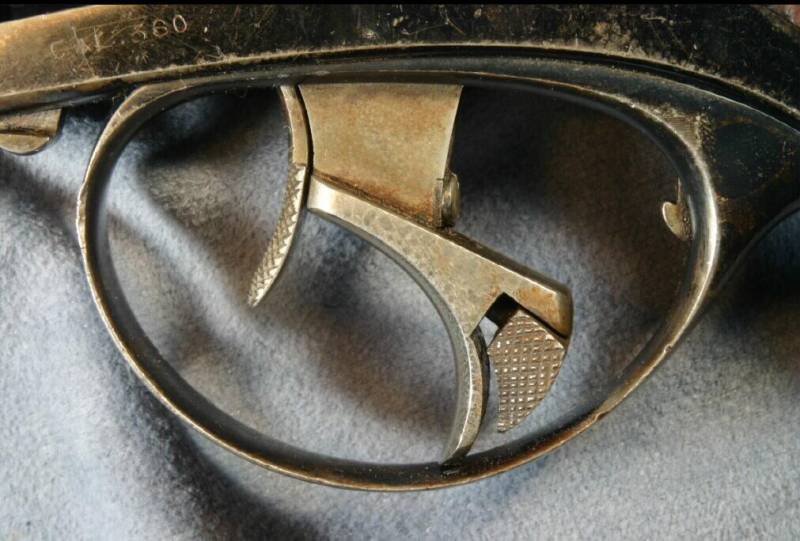 The original was that after cocking the rear trigger, it was placed on a sear and held by it until the shot ... 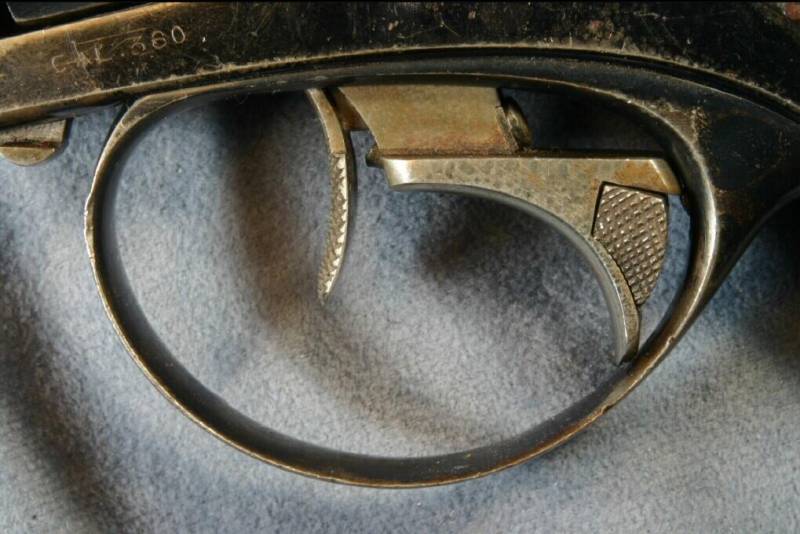 ... but it could be freed from this by pressing on the corrugated protrusions on it, and thereby simultaneously safely lower the cocked trigger
In total, about 600 revolvers of this type were made. The Kinokha factory closed in 1890, and he himself died in 1891.

PS The article used photos from the site http://littlegun.be