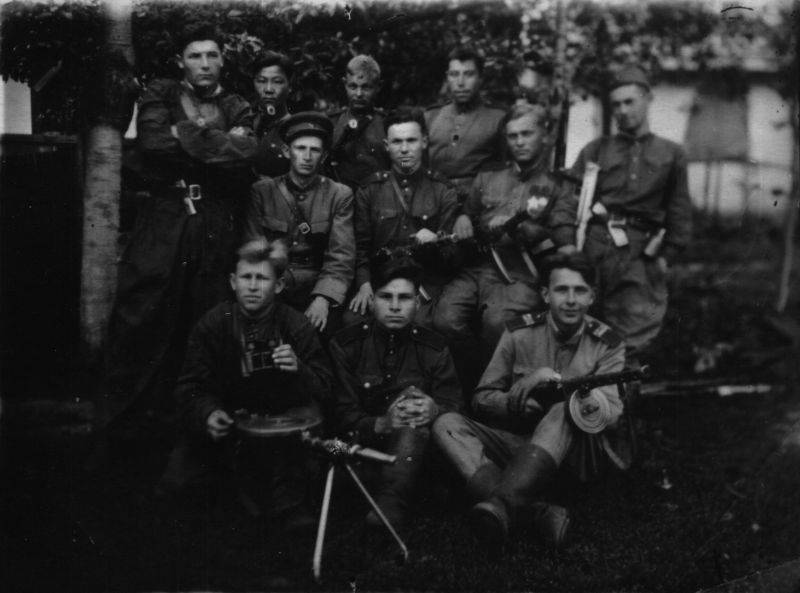 Group portrait of soldiers of the 281st Special Operational Regiment of the NKVD of the USSR in Western Ukraine. 1947

“The more monstrous you lie, the sooner they will believe you”

Having abandoned the Soviet and all-Russian past, the “square” “elite”, in need of an ideological justification for the legitimacy of their own power, began to construct their own “history". Russia-USSR in this "history" is assigned the role of an insidious aggressor-occupier who is guilty of all the troubles of beautiful Ukraine. Feelings about the troubles of Ukrainians and Ukraine have acquired a bizarre delusional character. Ukraine was represented in a halo of martyrdom, the victims of an insidious neighbor.

The status of the Ukrainian Soviet Socialist Republic (Ukrainian SSR) as the leading Soviet republic, scientific, technological, industrial and agricultural center of the USSR was replaced with the status of a victim colony. Soviet power, and before that Russian power, is seen as a purely colonial administration that served the "bloody" Moscow regime. All the good and good that Ukraine received from the Soviet government was forgotten. Including the creation of the Ukrainian statehood itself ("How the Bolsheviks Created Ukraine"), since previous attempts (Rada, Hetmanate, Directory) were completely unviable. The Council of People's Commissars created the Ukrainian statehood, the "nation" and Ukraine itself within its modern borders, giving away regions that never belonged to the "Ukraine".

After the Maidan and the civil war of 2014-2015. with the continuation of the civil conflict in the Donbas up to the present day, Russia has been turned into a permanent threat. The Kyiv regime blamed all its mistakes on Russia and the Russians, the plunder of the country, its split and confrontation in the Donbass. For eight years, people in Ukraine have been brainwashed, duped and zombified. They brought up tens of thousands of Nazis, new Bandera, and cleared out all the pro-Russian forces. At the same time, politicians and their oligarch masters continued to plunder the country, destroying science, education, medicine, leaving only scraps of the former highly developed Soviet economy that brought quick profits.

Hence the modern Ukrainian tragedy. Russians and current Ukrainians (Little Russians-Russians, Rusyns) are one people, with one language, a common past, a common faith and culture. It is impossible to create a nation-people in more than three decades of "independence" and even in a century of Soviet Ukraine. Despite all the propaganda of the Ukrainizers, their anti-Russian, anti-Soviet mythology, they were never able to create a single nation with one language, national identity, a sense of common territory and culture, an identical view of the past and future. There is a civilizational, spiritual split that divides Ukraine into several parts. Actually, this is natural, since the current "Ukraine" is a chimera, an artificial, unnatural formation.

The only way to solve this problem is to bury the anti-Russian project "Ukraine -" anti-Russia ". Restore the historical unity of the Russian state and people. Carry out full denazification and decriminalization. Activists of the Nazi movement, thieves-officials on trial or in "exile" - to the EU, the USA and Canada. Return the leading place to the Russian language, culture and history. Russify Little Russia-Russia, Russian Galicia and Volhynia.

Donbass, Novorossia - from Kharkov to Odessa, to separate, restore and include in the Russian union state (conditionally USSR-2). To carry out the same work in Little Russia (Chernihiv, Kiev regions), but it will last longer. With proper information work, restoration of the basic Soviet achievements (science, education, healthcare, transport infrastructure, national economy, etc.), this is quite achievable. Little Russia should again become Russian, and Kyiv - one of the capitals of the Russian world.

In Galicia, such work will go on for at least a generation. But you can’t refuse Galicia, these are our, historically Russian lands ("History of the destruction of Russian Galicia"), watered with the blood of many millions of Russian people. The task is difficult, but when was it easy for Russians? Great Russia and the Russian superethnos were forged in hard struggle and labor.

The myth of the "heroes-Bandera"

In Soviet historiography, with the definition of collaborators, accomplices of the Nazis and Bandera, there was complete order. Definitely an enemy of the people. In "independent" Ukraine, everything was turned upside down. Bandera became "national heroes" and "liberators of Ukraine from the bloody Bolshevik commissars." Through the efforts of the foreign diaspora, which poured into Ukraine in the 1990s, with the active complicity of local authorities and local pseudo-researchers, the entire population of Ukraine, including schoolchildren, was hammered into the myth of national heroes.

The essence of the myth:

1) the organization of Ukrainian nationalists (OUN) and the Ukrainian Insurgent Army (UPA), and not the Red Army, were genuine fighters against the German occupiers;

2) Ukrainian nationalists fought for the independence of Ukraine, and in 1991 new generations finally achieved freedom;

3) The OUN-UPA was an example of democracy, internationalism and freedom, rallying around itself all the forces that fought against “bloody Stalinism”, the “Moscow-Bolshevik horde”, fought against both Hitler and Stalin.

Propaganda was not immediately able to distort and rewrite the historical memory of the people. In the 1990s–2000s there were still many veterans, home front workers, living witnesses and their children who remembered the atrocities of the invaders and their accomplices, policemen, Bandera. People remembered Bandera not as "national liberators" at all, but as accomplices of the Nazis, terrorists who practiced massacres of civilians, including their fellow countrymen, who accepted Soviet power.

But as time went on, the old generations, who saw with their own eyes the crimes of Bandera or had a good, full-fledged education, passed away, and propaganda became more powerful and sophisticated. There was a mass Internet, social networks. People who wrote and talked about the past more or less objectively disappeared from the information space of Ukraine. So, in 2015, the historian and journalist Oles Buzina was killed. People who did not succumb to zombification, were active and expressed their position, were killed, maimed, thrown into prison or expelled.

By the beginning of 1945, as a result of extensive operations of internal troops with the support of Red Army units, SMERSH counterintelligence departments and the NKVD border troops, large formations of Ukrainian nationalists were defeated. The UPA lost most of its personnel, weapons and supplies. So, according to the Department for Combating Banditry of the NKVD of the Ukrainian SSR in 1944, more than 57 thousand were destroyed and more than 50 thousand members of nationalist formations were detained.

Under these conditions, the top of the OUN-UPA is trying to save the remaining personnel and wait for the explosion of the "Plague" - the beginning of the armed conflict between the Western countries and the USSR. Bandera hoped that "the West will help them." The nationalists are moving to a new tactic: large subunits of the “kuren” and “hundred” levels have been disbanded, and they are operating in smaller units of 10–15 people. Small groups were able to quickly maneuver, change their place of deployment. Open hostilities with units of the Red Army and explosives were reduced to a minimum, the main blow was dealt to the civil administration, people who sympathized with the Soviet regime.

New young cadres were brought up in a nationalist spirit (tactical program "Oleg"). Every year, up to 2 youths were transferred to an illegal position by the OUN. In order to cut off the road back, the neophytes were “tied up with blood” - they were forced to commit a crime, a terrorist act. Another program ("Orlik") provided for the spread of the influence of nationalism in the eastern and southern regions of the Ukrainian SSR. In these regions, an organizational network was created, a personnel reserve, propaganda and intelligence work was carried out. Another tactical program (“Dazhbog”) provided for the preservation of personnel through their legalization, “repainting”. Positions of the nationalist underground were created in the organs of power and administration, including law enforcement agencies. Preparations were made for the future seizure of power in the Ukrainian SSR, sabotage to restore the national economy, the establishment of communication lines, a system of secret shelters.

Thus, the Bandera people deeply conspired and waged a new war. They attacked party, Soviet and Komsomol workers, the local administration, "sub-advisers" - rural activists, ordinary collective farmers, specialists - teachers, doctors, agronomists, machine operators, engineers - all those whom the government sent to the western regions to revive the looted and destroyed by the war .

OUN terror quickly acquired a massive character, up to the requirements to destroy every fifth in the villages, where the inhabitants are too loyal to the councils. Torture, desecration of the bodies of the dead have become part of the program of Ukrainian terrorists. People's eyes were gouged out, bodies were chopped into pieces in front of frightened fellow villagers. The purpose of the terror was not only the destruction of the “sub-advisers”, but also the intimidation of the rest.

Thus, what is happening now in Ukraine has already been in history. Then the Ukrainian Nazis were guided by the Third Reich, after its fall - by the United States and England. Now collaborators, Western puppets and Nazis are looking to the West again. USA, NATO and EU countries give money, weapon and ammunition, the blood of the Russian people is shed. In fact, we are seeing a new world war where the West is using the "Ukrainian front" to destroy Russian civilization. As Brzezinski said:

"The new world order will be built against Russia, on the ruins of Russia and at the expense of Russia."
The only way to peace, security and a fulfilling life is the destruction of the Nazis, terrorists and bandits. Close the anti-Russian project "Ukraine". Cleaning underground and repainted. Liquidation of the pro-Western, Ukrainian nationalist ideology. Active information counteraction. Restoration of Russianness, historical memory of New Russia, Little Russia and Galician Rus. Reunification of the Russian world and the Russian people. This will allow us to survive and win in the confrontation with the West.