Pakistan creates tactical nuclear weapons that are not formally strategic but capable of performing their functions. 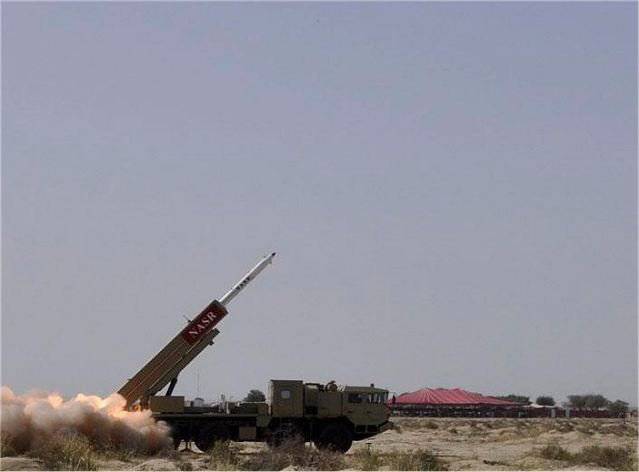 Pakistan creates tactical nuclear weapon (TNW) in order to increase its potential for weapons of mass destruction. About this with reference to analysts from the American organization Newklia Information Project (Nuclear Information Project) was reported today by the Hindustan Times.

In developing tactical nuclear weapons, Pakistan has almost entered the closed club of countries possessing such weapons, in which besides it are the United States, Russia, France and China. At the same time, Pakistan, like France, attaches tactical nuclear weapons to functions that Russia and the United States perform strategic nuclear weapons, US experts say. This is a short-range mobile rocket "Nasr", the first tests of which took place in Pakistan in April 2011 g. According to Pakistani open sources, it is intended to destroy objects with high accuracy at a distance 60 кv from the launch site. "Nasr" refers to dual-use missiles capable of delivering both nuclear warheads and conventional warheads. In Pakistan, it is being created as a "rapid reaction weapon for the purpose of nuclear deterrence of sudden threats from a likely adversary."

While the former USSR and the USA began to destroy their short- and medium-range missiles on the basis of the INF Treaty of 1987 and subsequent agreements, China, and after it, Pakistan were just beginning to create similar types of such weapons. At the same time, both in Beijing and in Islamabad it was understood that as a result of the forward deployment of nuclear weapons at the external borders, it gains the importance of strategic nuclear weapons. Under it were created aviation, land and sea carriers of non-strategic class, which, in particular, include Chinese and Pakistani fighter-bomber, related to the so-called the second-stage nuclear potential, ITAR-TASS reports.

"In China, according to US intelligence, the building-up of tactical nuclear weapons can be accomplished by equipping short-range DF-15-type ballistic missiles with nuclear warheads, as well as DH-10 cruise missiles," the Newcastle Project specialists say. At the same time, Chinese and Pakistani tactical nuclear forces, they emphasize, create the same threats as tactical nuclear weapons in other countries. Its use is fraught with an escalation of nuclear conflicts, there is a real risk of unauthorized use of TNW and its theft by terrorists.