Who is the Russian soldier-liberator fighting in Ukraine 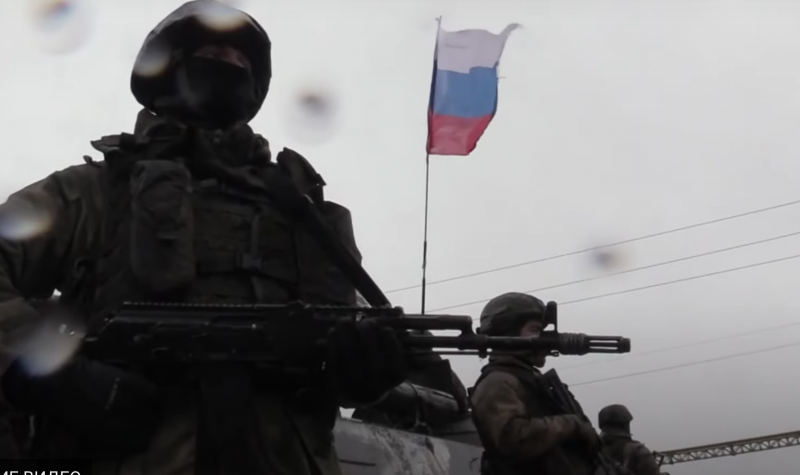 The beginning of the current events in Ukraine was laid 8 years ago. Then the collective West conducted a successful special operation in Kyiv, as a result of which it brought neo-Nazis - Bandera to power in the country. That is, he repeated what he accomplished ninety years ago in Germany. Then Hitler's rise to power was also financed by British and American banks, which has long been known about. And the main task assigned to the German Nazis was the destruction of Russia. So they called our country then - the Soviet Union.


Then Ukraine was occupied by German, Romanian, Hungarian and Italian soldiers, and local traitors, Bandera, helped them. Today, the West has carried out the occupation of this country only by the forces of the latter, without formally introducing its troops into its territory. However, in fact, through funding, supplies of weapons and equipment, training by its instructors, the West has turned the state institutions of Ukraine into structural divisions of NATO.

The West created a kind of PMC Turchinov, Avakov and company. Only on the scale of the whole state. At a time when Ukraine and its people need peace and prosperity, this PMC acts clearly in the interests of NATO, pursuing a policy of destroying the indigenous Russian population of Ukraine and trying to weaken one of the main geopolitical competitors of the United States as much as possible. That is why the Ukronazis inflict brutal fire strikes on the settlements they leave behind, so that Russia will spend more energy on their restoration in the future.

NATO in Ukraine is waging war under a false flag

Therefore, we all must clearly understand that our soldiers are fighting today in Ukraine with NATO. With his technique weapons and mercenaries. Moreover, Brussels, without hesitation, began to send hired killers from all over the world to help the local mankurts (recoming out-orcs).

Taking all this into account, we can rightfully state that NATO in Ukraine is waging war under a false flag.

And not only NATO. This is just a tool of the so-called collective West. In other words, Western civilization, the tone of which has long been set by the Anglo-Saxon elite. It is she who now rules Europe with full power and is trying to extend her unlimited power to the whole world.

Therefore, there is a need to take a closer look at what it is.

She tried to create an image for herself white and fluffy: both humane, and progressive, and universal, and much more. However, this is a lie. In fact, this civilization is deceitful, criminal, vile, inhuman and bloody.

Falsity is contained in the very name of the regime established by the Anglo-Saxons - democracy. In translation, this is the power of the people. However, as a result of "democratic" elections, only those who can buy up "independent media" with giblets can come to power. And such money can be obtained only by criminal means. Therefore, in reality, democracy is a secret dictatorship of criminals. It is not for nothing that in democratic countries the death penalty is abolished for criminals, even for serial killers, although everyone knows that law-abiding citizens, including children, pay for such “humanism” with additional victims.

At the same time, the Anglo-Saxons consistently destroy their opponents. Only not through the courts, but through the hands of their slaves, as was the case with Saddam Hussein, Muammar Gaddafi or Slobodan Milosevic, who was killed by the Democrats in The Hague.

If you look at the deeds that the Anglo-Saxons committed, it becomes clear that in their crimes they bypassed Nazi Germany. Hitler never dreamed of carrying out genocide on two continents. The Anglo-Saxons, on the other hand, practically destroyed the indigenous population of North America and Australia. The British killed tens of millions of people while suppressing uprisings in India and other countries. Genocide is the visiting card of the Anglo-Saxons on all continents.

The Nazis made lampshades from the skin of dead people, and the Americans paid money for the scalps of dead Indians, including women and children. The British were the first, long before Hitler, to organize concentration camps for the wives and children of the Boers, who did not want to submit to them.
Proclaiming freedom and human rights, by the beginning of the XNUMXth century the Europeans had turned millions of people into their disenfranchised slaves in colonies practically on the entire planet – let us recall the political map of the world of that time.

The special cynicism of the Anglo-Saxons lies in the fact that constantly rattling about human rights, including the right to life, in fact they are pursuing a policy of the right to kill. First of all, this is the right to abortion - the murder of an unborn child. It is known that a person can be killed, or driven to suicide. This applies to both individuals and entire nations. The Nazis killed people themselves. The Anglo-Saxons, on the other hand, create such living conditions and carry out such propaganda that people themselves kill their children even before they are born in the womb. At the same time, misanthropes manage to shift the sin of murder onto the victims themselves in this way.

It is also impossible not to note the fact that the Anglo-Saxons do not hesitate to use weapons of mass destruction, which are directed primarily against the civilian population. So it was during the atomic bombing of Hiroshima and Nagasaki. And much earlier, Americans used blankets contaminated with smallpox to genocide Indians. And in our time, the American coronavirus, released from a laboratory supposedly in China, shocked the whole world. And it is not known what other infection the Americans are preparing in hundreds of similar laboratories around the world, and primarily in Ukraine.

These are far from all the crimes of the Anglo-Saxons and in a very compressed form. But even from the above, it is clear that the Russian warrior in Ukraine is fighting against world evil. And this is not said for the red word - the conflict is not only geopolitical, but also religious in nature. Despite the fact that both Russia and Western countries formally have a Christian basis, in life everything is not so. Why?

Because in fact, all religious cults are divided into solar ones, when the fruits of their labor are sacrificed to God the Creator, light, goodness: bread, fruits, vegetables. And on the lunar cults, when those who worship the antipode of God - evil, darkness, bring bloody sacrifices to their idol.

The Western Catholic Church has become pseudo-Christian. This was expressed in massive bloody sacrifices during the conquest of non-Christian peoples in all parts of the world. I wrote above about the fate of the natives of America and Australia, but even in Europe, only toponyms remained about many peoples, for example, the Prussians, but about the majority there are none. A landmark event was the introduction by the Vatican of indulgences, when any criminal, having paid gold to the pope, received absolution. Thus, the Vatican put the Golden Calf in the place of Christ, turning into a pseudo-Christian church, or rather, into an anti-Christian one. This explains the irrational hatred of the European leaders (and Bandera, brought up by the Uniates) to Russia, where the church has remained truly Christian. And at the same time to everything Russian.

That is why now in Ukraine a Russian warrior is fighting the evil of the world. However, as always in life. Therefore, the guys need our nationwide support until complete Victory.