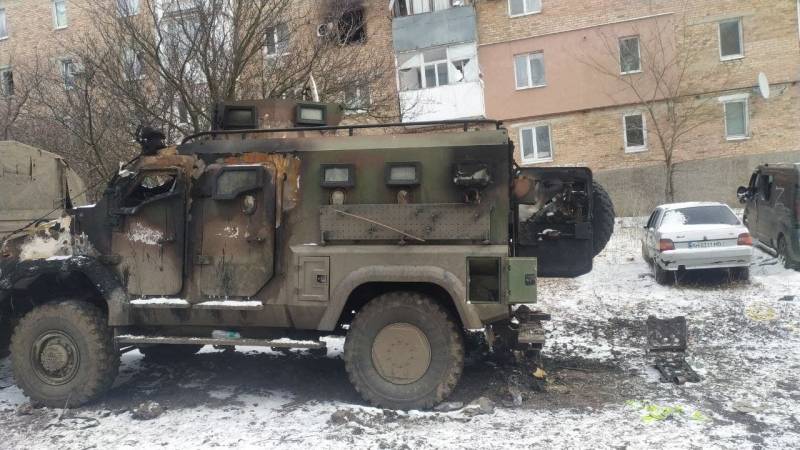 The development of light wheeled armored vehicles in Ukraine was taken care of long before 2014, but the projects were mostly episodic. After the Maidan and the hostilities in the Donbass, everyone began to make armored cars. The fight against their own citizens required protection from small arms weapons and splinters. At first, the national battalions had to turn civilian equipment into real "shushpanzers", the mere sight of which made one shudder. But over time, the Ukrainians gathered and gave out a whole scattering of armored cars to the mountain. It is important to understand that it was quite difficult to create machines on our own basis - by that time the industry could no longer offer modern solutions. Foreign suppliers were involved in the manufacture, something was compiled on their own, but the output was a real armored vinaigrette. 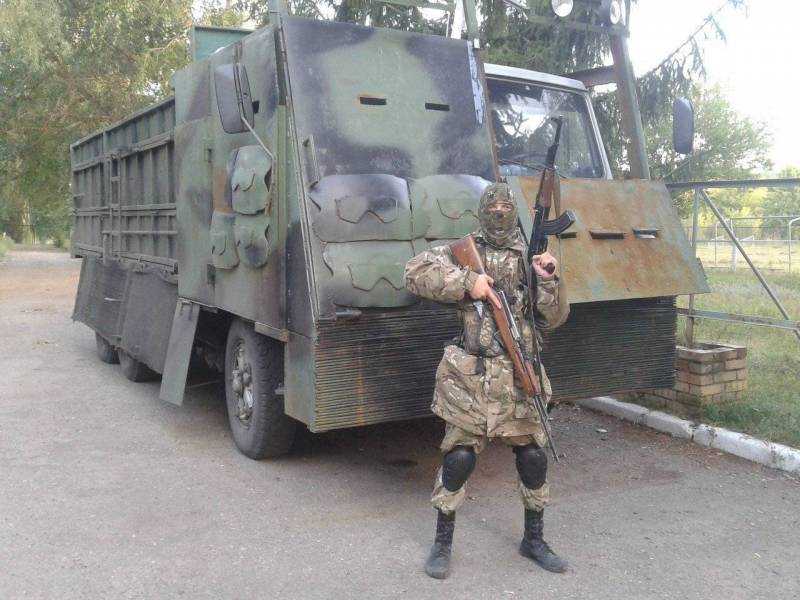 In 2014, the nationalists rushed to the Donbass on such “shushpanzers”. Source: topwar.ru 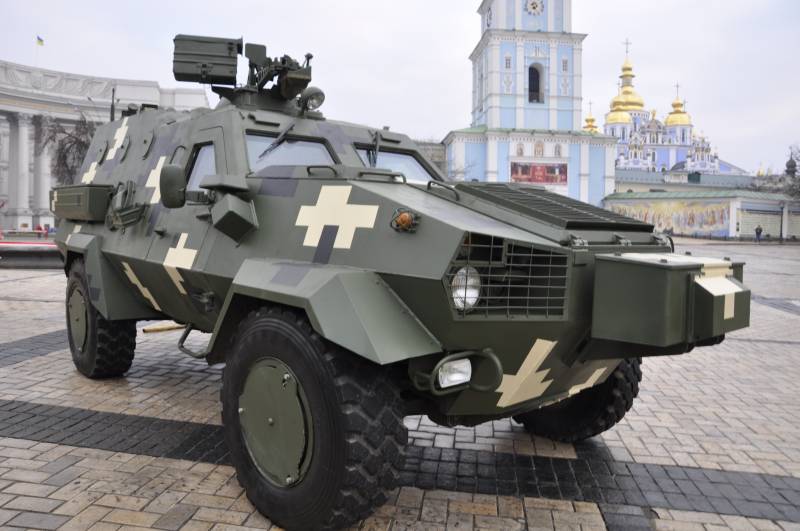 "Dozor-B". Source: military-informant.com
One of the most professional manufacturers of armored vehicles in Ukraine is rightfully the Kharkov Design Bureau of Mechanical Engineering. The company's engineers were among the first to offer the army the concept of a light wheeled armored car. In 2004, an experimental Dozor-B (tactical wheeled combat vehicle) was built, which since then has sold no more than 30 copies.

It should be noted that there is nothing tricky in this development - some African republic would have completely coped with such a project. The Dozor's key units are imported - a 190-horsepower Deutz engine, a five-speed Allison automatic transmission. Otherwise, this is a classic armored vehicle with a gross weight of 6,3 tons, partially made on the BTR-80 nodes, capable of taking on board up to 6 people and having very conditional protection against mines. Not only was the Ukrainian industry unable to start producing its own engines and transmissions, but armor had to be purchased in Poland.

As a result, up to 25 armored vehicles have been serving in the Armed Forces of Ukraine since 2016. Ukroboronprom offers Dozor for export, but there are no buyers yet. 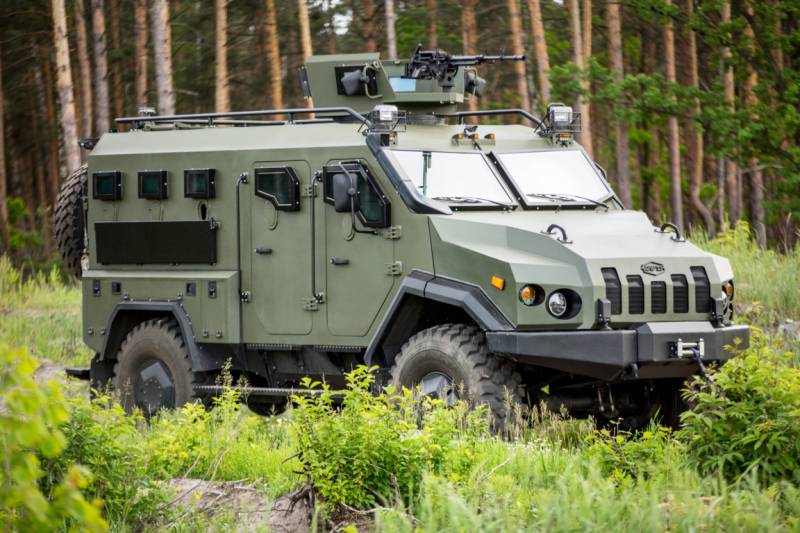 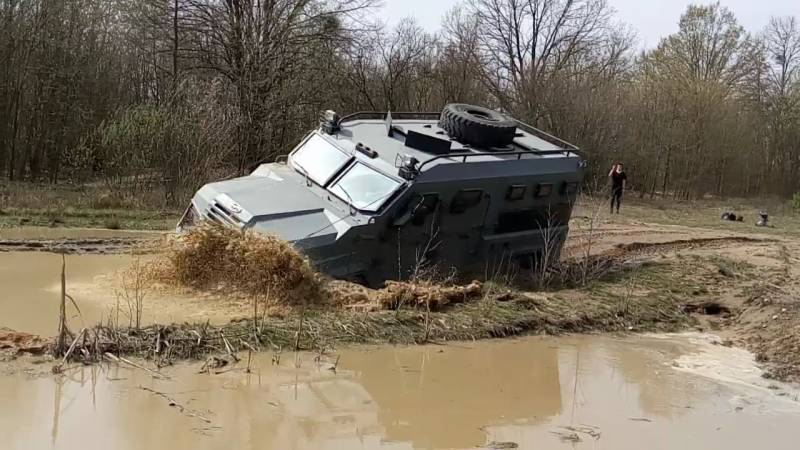 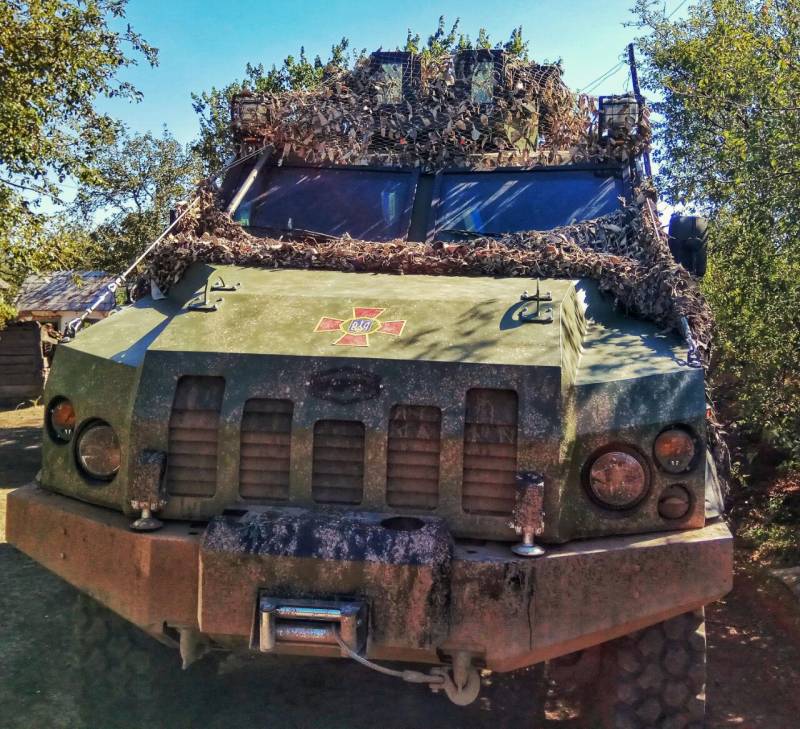 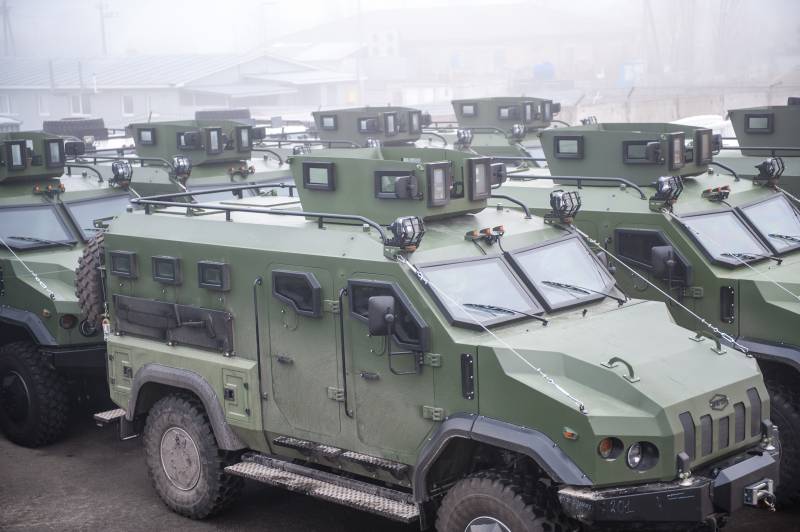 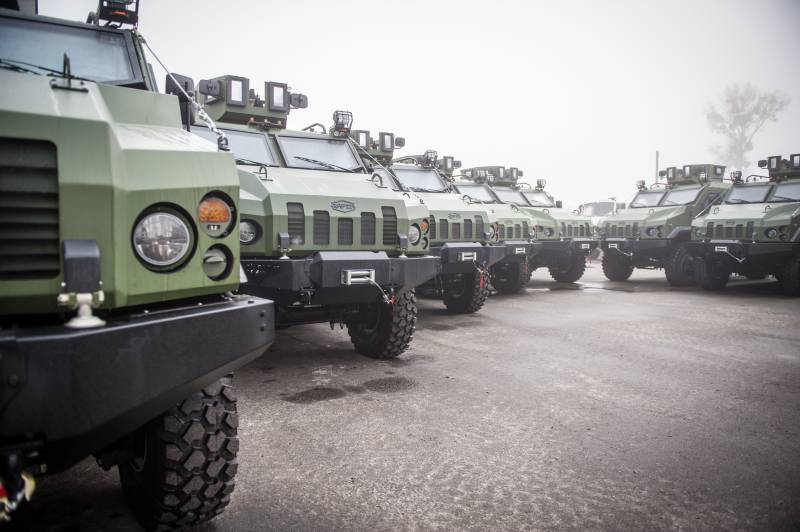 Armored vehicles "Warta". Source: ukrarmor.com
The next manufacturer is the design and production enterprise "Ukrainian Armored Vehicles", which the engineers themselves call the best in the country. The visiting card of the plant is a specialized armored vehicle "Varta". The armored car was developed in cooperation with Belarus on the basis of the MAZ-5434 truck and belongs to the generation of vehicles that appeared after the Maidan. That is, directly for the punitive operation in the Donbass.

During development, they could not decide on the power plant for a long time. At first it was the Russian YaMZ, then Cummins, and eventually settled on the Chinese 380-horsepower Weichai. By the way, several armored cars have already become Russian trophies. "Varta" is quite seriously protected from undermining - according to the developer, up to 6 kg of TNT can explode under the wheel without fatal consequences. The crew seats, as expected in such cases, are attached to the ceiling and walls through energy-absorbing shock absorbers. That is why only 17,5 fighters with a crew fit in a fairly large and heavy (10 tons) armored car. "High-quality Swedish 560 armor steel" protects against a 7,62 mm bullet with a heat-strengthened core. A combat module with a machine gun from 7,62 mm to 14,5 mm is mounted on the roof.

In 2020, Varta was transferred to the home-grown KrAZ platform - this is how the Kamrat S-130 appeared. They did not come to use the chassis from Kremenchug from a good life - relations with Belarus at that time went wrong. On the Kraz platform, the armored car lost weight to 14,5 tons and became a little more compact. It is not known how many Kamrats were collected, since KrAZ has practically not been working for several years. The famous American contract for the purchase of several hundred trucks inspired some hope, but now, for obvious reasons, it is irrelevant.

In total, there are at least 200 such armored cars in the National Guard and the army of Ukraine, some of which are fighting, and some have already been destroyed. 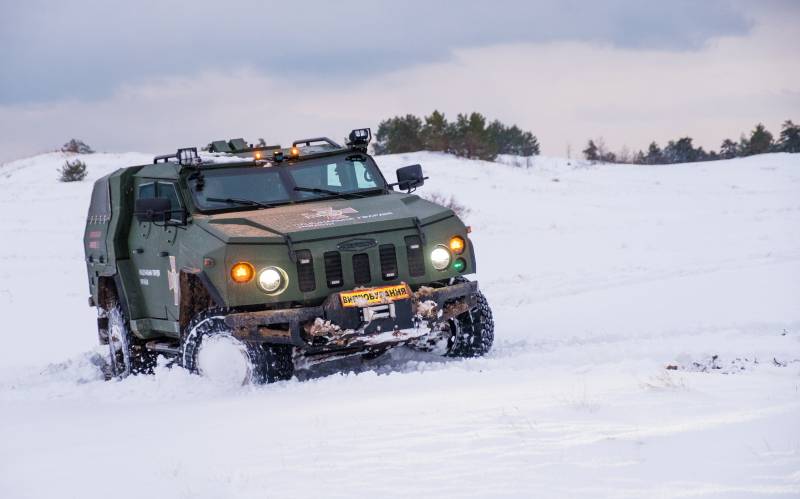 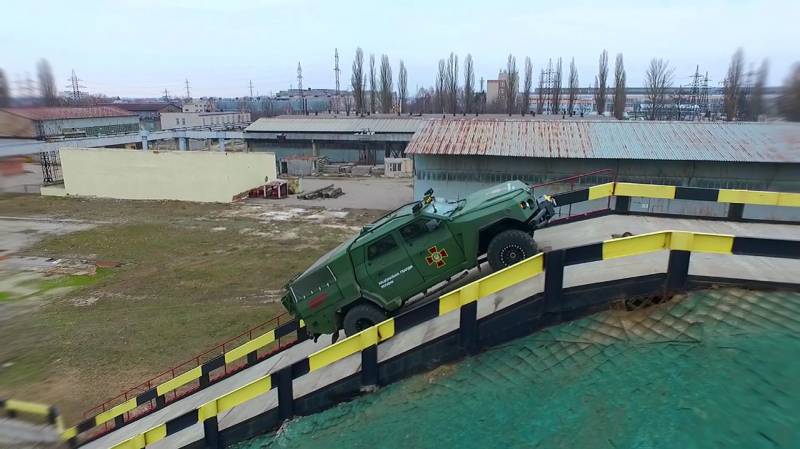 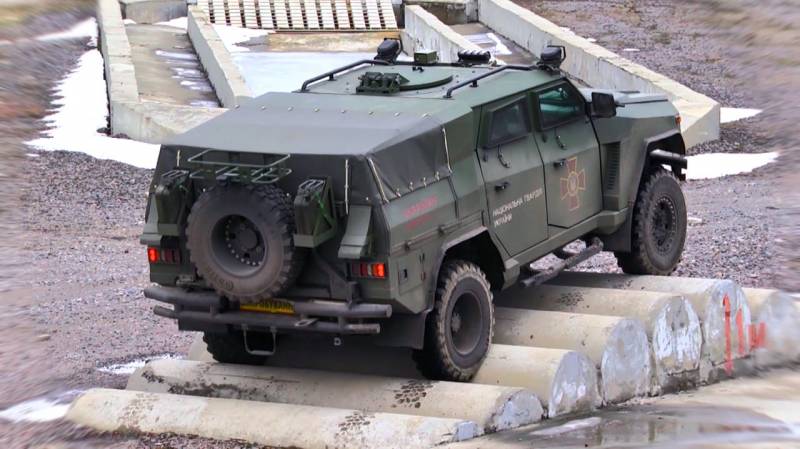 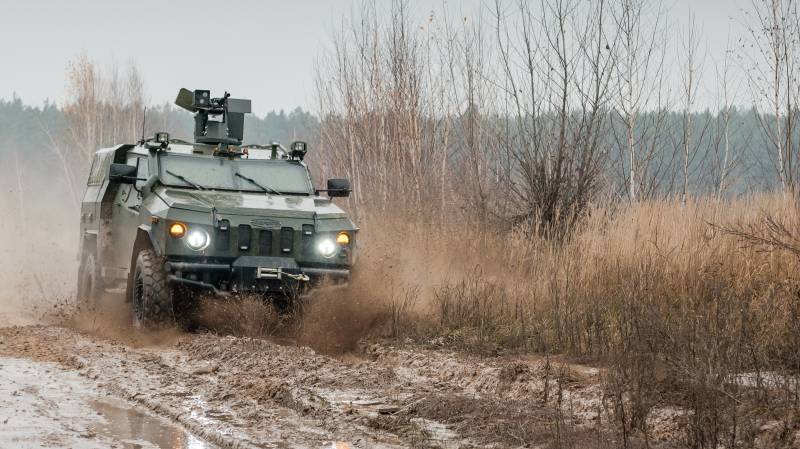 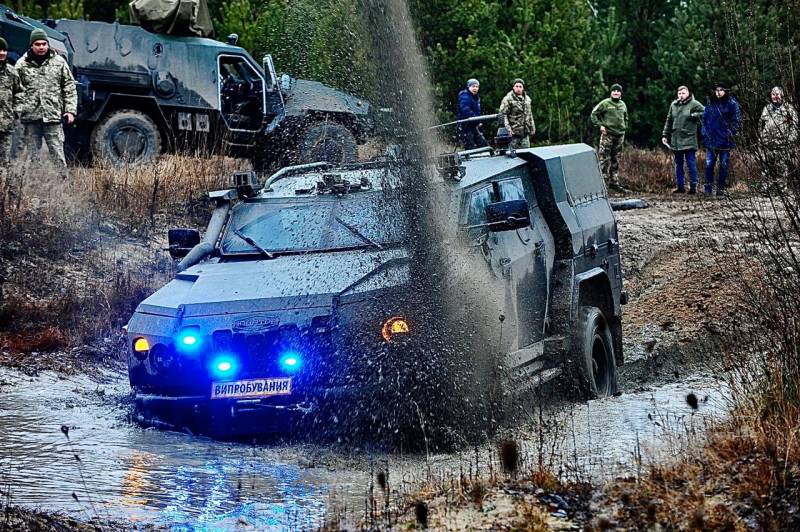 Armored vehicles "Innovator". Source: ukrarmor.com
"Innovator" is another armored car from "Ukrainian Armored Vehicles". The car is relatively light (8,8 tons) and can accommodate five people. This tactical armored car, which is a "disguised" Ford F-550 pickup truck, is intended for special forces of the Armed Forces of Ukraine and the National Guard of Ukraine. The development of Novator and subsequent adoption into service is an attempt by the Ukrainian army to get close to NATO standards and finally destroy its own defense competencies. On the official website of the manufacturer it is written:

“The interior lighting of the car has a mode of full, partial and night camouflage lighting. It creates conditions for the safe movement of the car at night and meets NATO standards.”
Or another:

"Seats tested to STANAG 4569 in accordance with NATO AEP-55 requirements."

Such "Innovators" managed to build at least 50 pieces. Part of the equipment was equipped with anti-tank Stugnas and Javelins.

In a motley company of Ukrainian armored vehicles, which is a headache for the technical services of units, one cannot ignore the Kozak car with Italian roots. It has been produced at the Kiev Scientific and Production Association Praktika since the mid-2000s.

"Kozakov" was sculpted from what was. Initially, even the GAZ-66 chassis was considered, later they leaned towards the platform of the Iveco Daily light truck. The Italian Iveco Eurocargo 2x4 chassis is already used as modification platform No. 4, Finnish 12 mm Miilux steel is responsible for protection. Engineers rejected the Ukrainian armor, they say that with a similar level of protection, the car eventually becomes heavier. The developers claim that the share of imported equipment in certain modifications of the Kozak can reach 80%. This, by the way, during the devaluation of the Ukrainian currency, caused a noticeable rise in the price of Kozak under the state order in 2020 by 1 million hryvnias at once.

If you look at the technical features, then the Praktika products are a classmate of the vehicles presented above from Ukrainian Armored Vehicles: the mass is about 15 tons, the crew is 10 people, and a machine-gun emplacement is provided on the roof. The most common version of the armored car is the Kozak-2M1, which can withstand up to 8 kg (!) of TNT under the wheel. There is also the Kozak-3, which is an armored version of the British Land Rover Defender. Used version in the border service of Ukraine. In the latest modification, Kozak-7 chose the familiar Ford F-550 chassis with a 390-horsepower diesel engine. In total, about 150 Kozaks of various versions and designs serve in the Armed Forces of Ukraine and the National Guard. 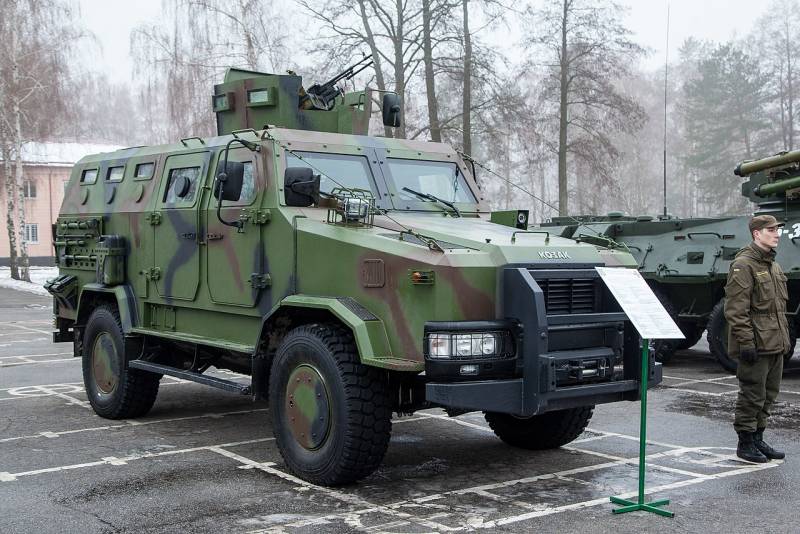 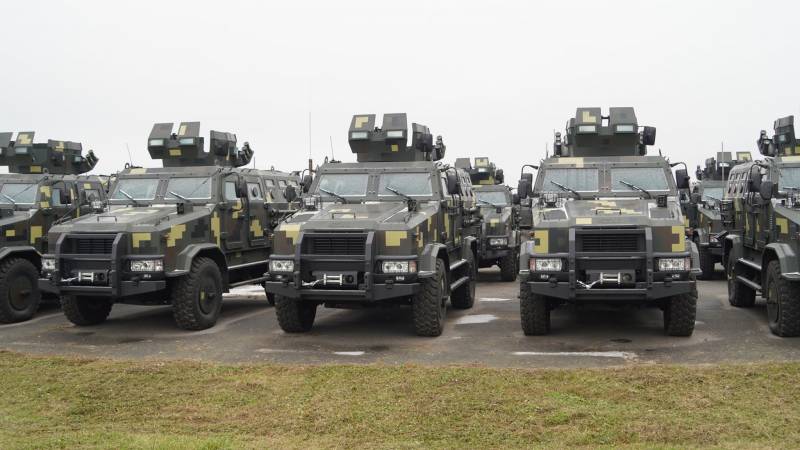 "Cossacks" of the second series based on Iveco. Source: m.censor.net 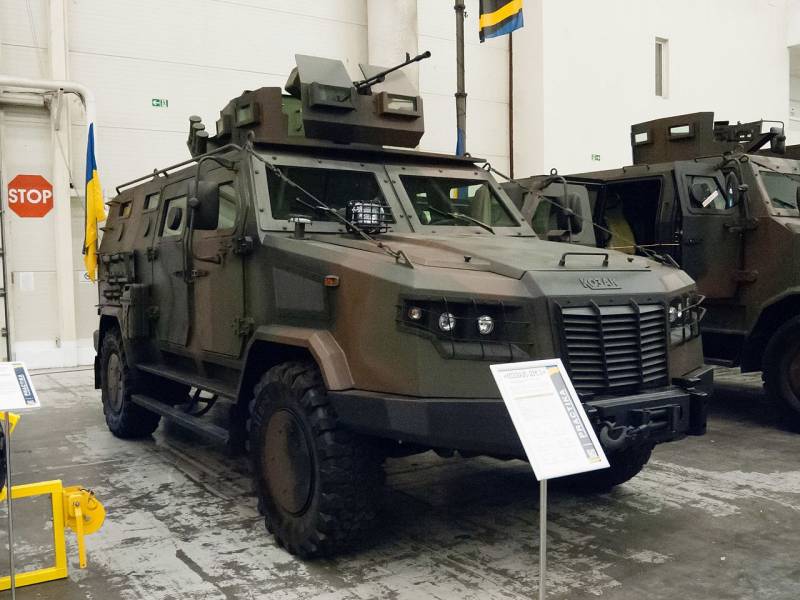 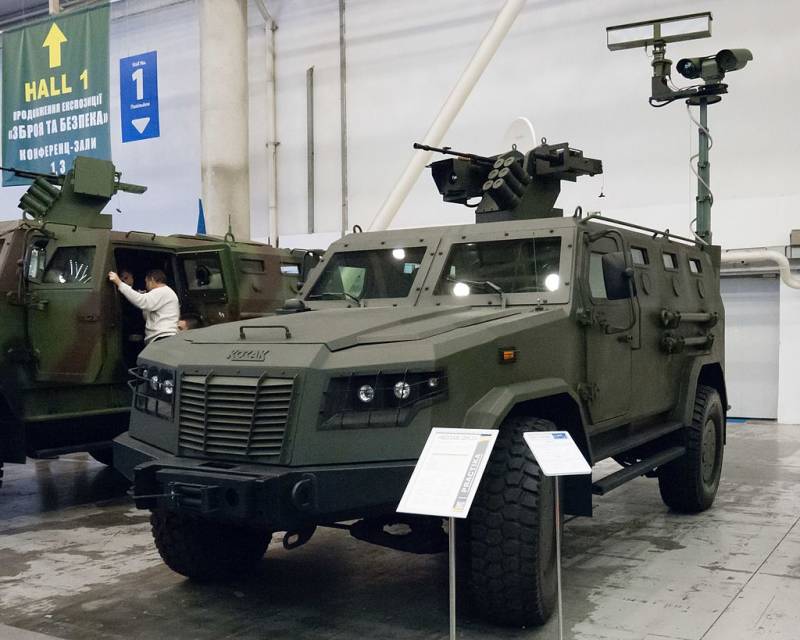 "Kozak-2M1". Source: wikipedia.org
Also in the National Guard you can find Bars armored cars, united in three persons at once. The first series is built on the basis of Isuzu, the second - on the Kia platform with a Hyundai engine, and the third is already on the American Dodge Ram. In the latest modification, a remote-controlled module with a 10-mm cannon was installed on the roof of a 23-ton truck. However, this modification remained in the category of experimental ones. For eight years of production, the manufacturer "Bogdan" delivered about 100 vehicles to the National Guard. Immediately before the start of the Russian military special operation, the Armed Forces of Ukraine received Bars-6 and Bars-8 armored cars for 500 million rubles. 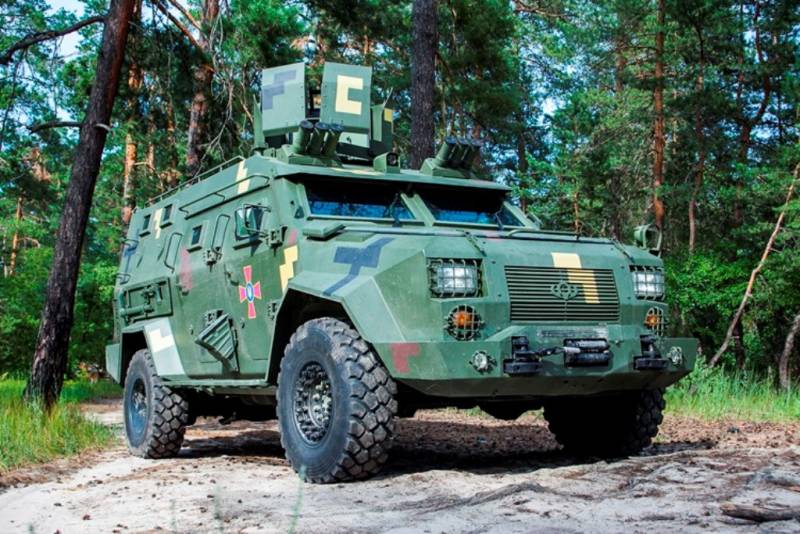 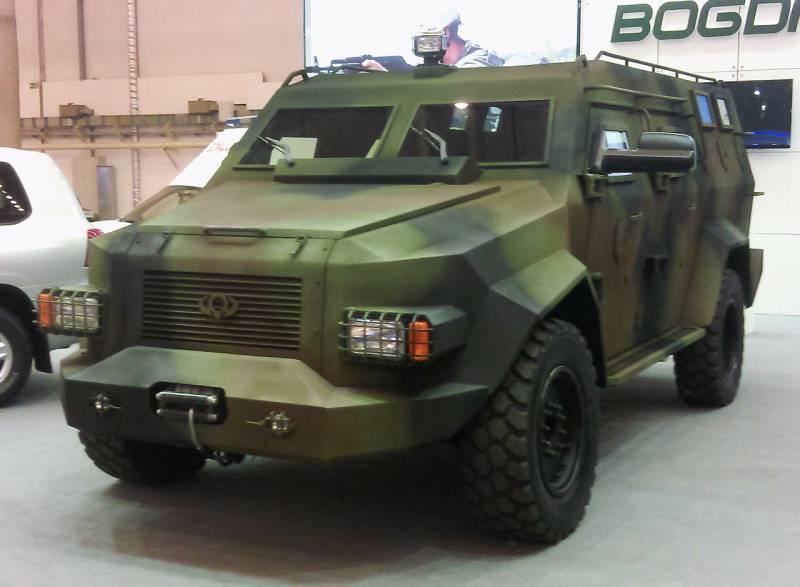 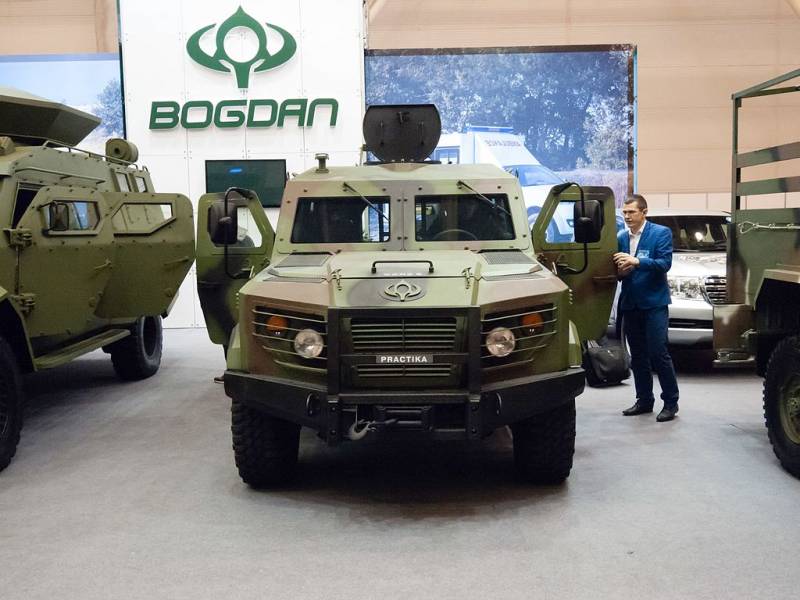 "Bars" in various versions. Source: wikipedia.org
logical conclusion stories about the Ukrainian armored menagerie will be the presentation of numerous vehicles from Kremenchug. The lightest of them - KrAZ "Cougar" has a very distant relation to the local industry. A 6-ton armored car was developed by the Canadian-Emirati Streit Group based on the Japanese SUV Toyota Land Cruiser. In Kremenchug, cars were only assembled and painted.

In total, there are now about 70–80 such Cougars in Ukraine. The successful and hardy chassis of the Ford F-550 in Kremenchug became the basis for the 8,8-ton Spartan. It also bears the KrAZ emblem, but it was developed in Canada and, like its younger brother, is only being assembled in Ukraine. Both vehicles, although protected from the most common small arms, are deprived of effective mine protection - the bottom can withstand no more than two offensive grenades. Based on this, armored cars are only capable of performing police functions and, with great restrictions, can be used in combat. 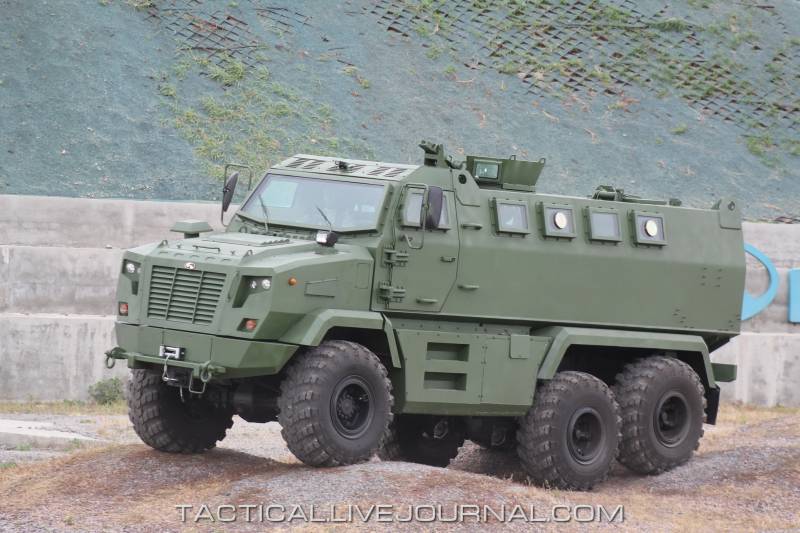 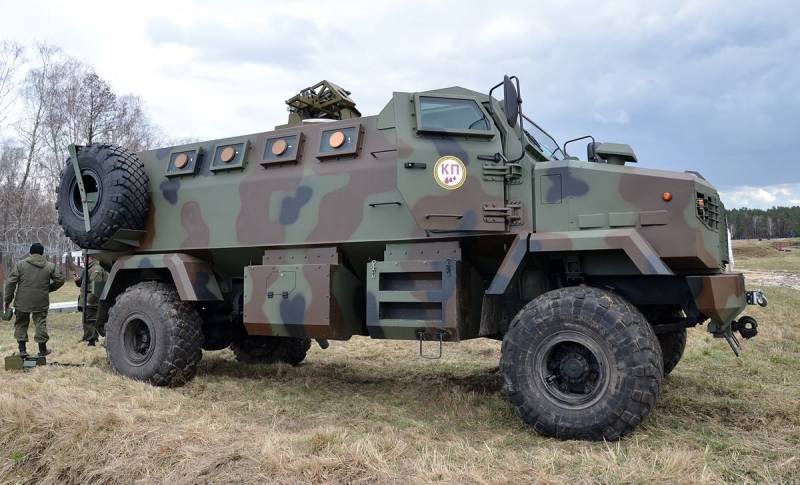 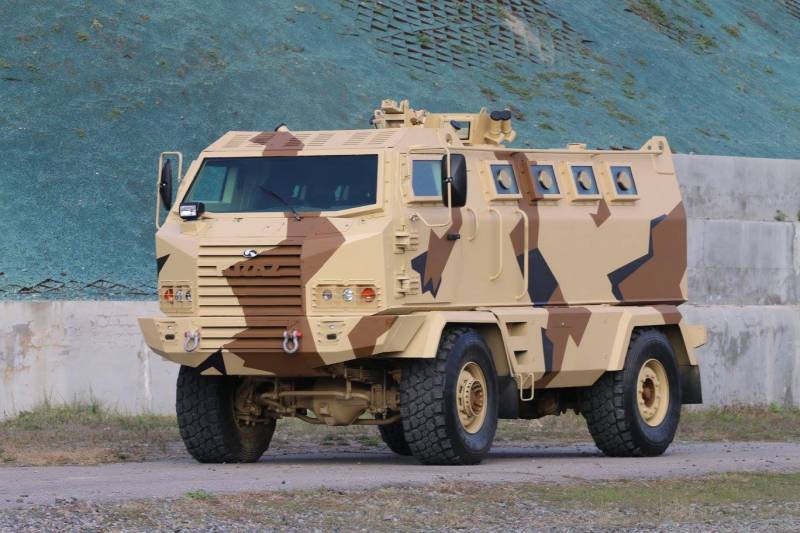 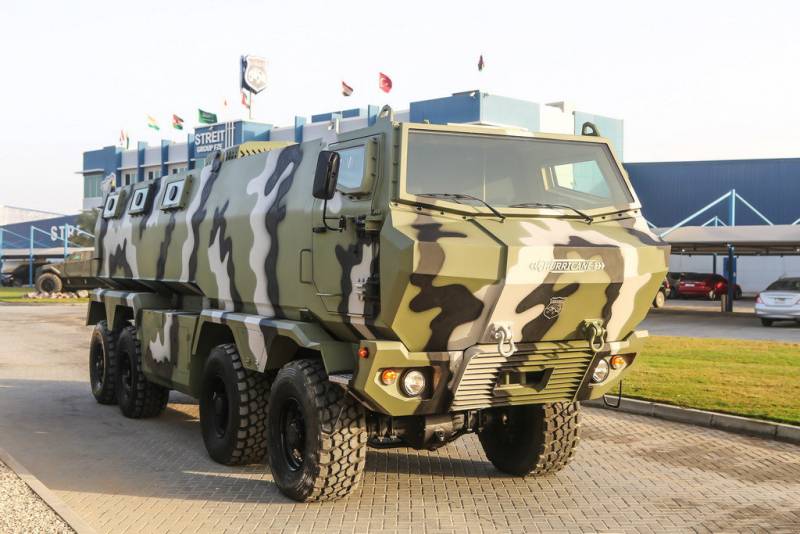 KrAZ "Hurricane". Source: trucksplanet.com
On the basis of KrAZ-6322 6x6 in 2014, a heavy armored car "Fiona" was built in Kremenchug. The car was adjusted to international MPV (Mine Protected Vehicle) standards, equipped with an explosion-proof V-shaped bottom and armor that protects against SVD with a heat-strengthened core.

In terms of performance characteristics, Fiona is a typical competitor of the Russian Typhoon, but the Ukrainian never made it to the assembly line. Despite the fact that specialists from the Streit Group participated in the development, the level of workmanship, price and reliability did not suit the customers. Questions also arose about the acquisition of armored cars with Russian YaMZ engines.

A little more fortunate was the younger brother KrAZ Shrek, built on two axles instead of three. Several armored vehicles entered the Azov regiment, battalion named after. Kulchitsky and the Kharkov operational brigade. The cabover armored vehicles KrAZ "Hulk" (4x4) and the giant 28-ton KrAZ "Hurricane" (8x8) did not leave the category of demonstration samples.

In the end, it remains only to wish a speedy meeting with the described samples at the exhibition of captured equipment of the Army-2022 forum.