27 September 2012
11
The development of the first aircraft-shells began at the dawn of development aviationGuided by the terminology of the time, these devices were called aircraft torpedoes. The project of the world's first projectile was created in 1910-1911 by the Frenchman R. Loren. The development of aircraft shells did not stop between the two world wars. And with the outbreak of World War II, this idea received only an additional impetus to development. The Germans were especially successful in this direction, having created the V-1 projectile, which after the war served as the basis for many further developments around the world.

The projectile was an unmanned aerial vehicle designed for a single launch. The trajectory of its flight was determined by the aerodynamic lifting force of the wing, as well as the engine thrust and gravity. In addition to unmanned versions, there were also projectiles that could be controlled by suicide bombers. Similar projects were developed in Japan, and in Germany at the end of the war, a number of V-1 projectiles were redesigned for the manned version. At present, the name of the projectile is considered obsolete; it has been replaced by a name practically known to everyone — the cruise missile.

Compared to traditional aircraft, the main advantage of this type weapons there was his unmannedness, which allowed not only to save people (the pilot), but also to reduce the size and size, which had a positive effect on detection. Since all the projectiles and cruise missiles are designed for one-time use, you can place far fewer demands on them, in particular, on the resource of the engine and other units. 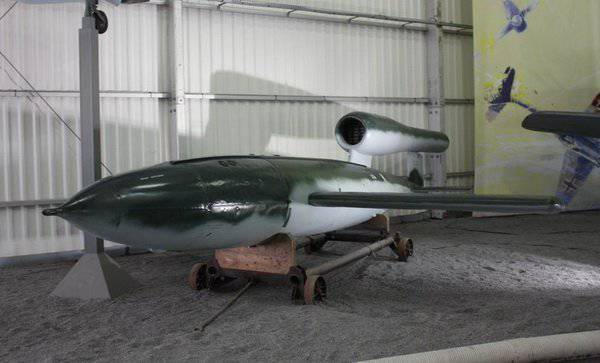 German Fau-1 Projectile
The first fact of the combat use of airplanes can be considered the night from 12 to 13 in June 1944, when London first experienced the capabilities of a new German weapon, which received the name “V-1”. Despite the fact that nothing of the kind at that time existed in the whole of Europe, these weapons could not meet the expectations of the Third Reich. The relatively small range and speed, as well as low reliability and large size of the launchers, significantly limited the ability to use this weapon.

There were similar work in the USSR. Having learned that the fascists had tested new weapons, Soviet designers A. A. Novikov and V. N. Chelomey summoned to the State Defense Committee (GKO) and set themselves the task of creating a new type of weapon - unmanned military equipment. The corresponding GKO decision was received at the end of the summer of 1944. At that time, Chelomey completed the sketch work on the projectile aircraft with its PU-R-DD-3, which was called 10X. And already 19 September 1944, he was appointed chief designer and plant manager №51 NCAP.

The creation of the 10X was accelerated by the delivery of incomplete V-1 samples from Poland and the UK. But the full copying of the device was not discussed. For example, when creating drawings on the autopilot AP-4 for the Soviet aircraft projectile 10X in order to most quickly master it in mass production, emphasis was placed on the use of gyroscopic nodes of serial Soviet instruments. Even before the start of 1945 in the USSR, it was possible to create the first prototype of an aircraft-projectile and conduct official tests of the D-3 engine in CIAM. 5 February 1945 of the year the assembly shops of the plant left the first serial 10X.

Devices for the suspension of new 10X aircraft shells were equipped with the 2 bomber Ep-2 and 3 bomber Pe-8. In this case, the use of more compact and cheaper bomber Er-2 seemed more preferable. However, due to the fact that the tests of new weapons were carried out in Central Asia, the planes Ep-2 could not be used. Because of the high temperature, they were let down by the motors, for this reason the flights were carried out only on Pe-8.

Factory flight tests of new weapons began on March 20, 1945, in the Hungry Steppe, based on an expedition in Jizzakh. As part of the first test phase, the operation of the suspension devices on the Pe-8, the dropping of the 10X, as well as the operation of its mechanisms and the engine at the moment of separation from the aircraft carrier was carried out. The 10X was dumped at an altitude of 2000 meters, after which, until the plane’s Sanriad entered the horizontal flight, it lost 100-200 meters of altitude. Then the flight went at a given height according to the course established on the ground. From 22 dropped 10X projectiles, normally only 6 could go on independent flight.

At the next stage of testing, the main characteristics of the 10X projectile were determined, and the operation of various units was checked. From 22 tested devices in independent flight successfully able to go already 12. The speed was reached to 600-620 km / h, and the flight range was up to 240 km, which corresponded to the calculated parameters.

At the third stage of testing, the accuracy of hitting airplanes into the target and the effectiveness of their combat charges was checked. Of the 4's 10X units, which were equipped with an explosive, 3 were able to complete the task satisfactorily. The strength of the explosion was equivalent to the strength of the 2 explosion of a ton of aerial bomb. To determine the accuracy was carried out 18 launches. At the same time, only 6 projectiles could fly to the target, 5 of which could hit a given square with 20 dimensions on 20 km, remote from the drop point on 170 km. Part of the reason for the failures were severe climatic conditions: sand clogged the air ducts and, falling into autopilot, incapacitated them, and the air temperature rose to + 60 Celsius.

Anyway, the flight tests were completed on July 25 of the year 1945. From 66 launch aircraft shells in independent flight 44 machines passed, and in 20 cases the requirements for the course were met, in 24 in range. In the future, the 10X projectile was repeatedly upgraded. In particular, there were works on the reliability of his transition to independent flight, as well as on the accuracy of hitting the target. Their state tests took place from 15 December 1947 to 20 July 1948. While on the 1945 projectiles, the stabilizer and wing type, as well as the power regulator, were similar to those of the German V-1 prototype, they were replaced with more advanced domestic designs on the 1948 version of the year. In addition, the throttle pulsing air jet engine has been increased from 270 to 325 kgf. The accuracy of the projectile aircraft was improved from 36% (1945) to 88% (1948).

Developing the design of pulsating engines, the Chelomey design bureau began the development of new, more powerful PDRDs. Such engines were D-5 with 420 - 440 kgf and D-6 with 600 kgf. As a result, the design of the new 5X projectile began just under the D-14 engine. Thanks to the new engine and the more advanced form of the fuselage than the 10X, it had to have a greater speed - about 130-150 km / h. The big weight of the new PUWRD was compensated by reducing the weight of the wing design of the aircraft-projectile. In 1946, the 20 of the first 14X was built. Their flight test runs were from 1 to 29 July 1948.

Four of the shells used in test aircraft had trapezoid wooden wings (the forced version) and six more — rectangular wooden wings (the normal version). As a carrier aircraft, as in the case of the 10X, the Pe-8 bomber was used. According to its main flight characteristics, which were achieved during the tests, 14X met all the requirements for it. In the accelerated version, this projectile on the 100 kilometer segment developed speed in 825 km / h, exceeding the set speed by 10%. At the same time, the wooden wings, which did not have sufficient strength, often broke and only after strengthening their structure, could the 14X be adopted.

At the beginning of 1947, the plant No. 51 received a task to create new unmanned aerial vehicles: 15X and 17X for the Navy and 16X for the Air Force. However, the task was corrected soon enough and it was decided to confine ourselves to the 16XA projectile aircraft. By the end of 1947, the first series of 5 experienced 16ХА was ready, and 1 was equipped with a launch vehicle - Tu-2 bomber. From July 22 to December 25, 1948 six 16HA, one of which received the designation "Surf" completed the first stage of flight tests. 5 from tested projectiles were equipped with automatic control systems PSU-20 (pneumatic control system) and were stabilized in the 2-x planes, another 1 sample received automatic control of the ESA-1 (electric control system) and stabilization in the 3-x planes.

In the 1949 year, flattering tests were able to pass 28HA's 16HA-projectiles, which were made in the first embodiment. At the initial stage, the control systems for the PSU-20А and ЭСУ-1 controllers, as well as the aerodynamics of the projectile aircraft were tested, the operation of the D-312 engine was checked, and the design elements were tested and tested on the launch vehicle on the new aircraft carrier Tu-2. The entire second phase of the test was devoted to fine-tuning the engine. At each of the two stages, the 10 and 11 test launches were completed, respectively.

During the test, the flight speed of the projectile with the D-312 engine reached 720-775 km / h, after which it simply stopped. It was obvious that for such speeds another PWRD was needed. Studies have shown that the best way to increase the maximum speed at which the engine would continue to remain stable is the contraction of its nozzle part. As a result, the 51 plant was reviewed and tested more than 10 engine options and chose D14-4. This HRVD stably operated in a wide range of speeds - from 300 to 1000 km / h. In addition, he had less vibration than D-312 and an increased work resource.

At the third stage of testing, 13 launch of projectiles with new D14-3 and D14-4 engines was performed. The latter proved its effectiveness throughout the entire flight route. The speed of the 16XA with this engine was 872 km / h and allowed the possibility of a forced flight mode at speeds up to 1000 km / h. Tests of the new projectile were found to be satisfactory and ended in September 1949. 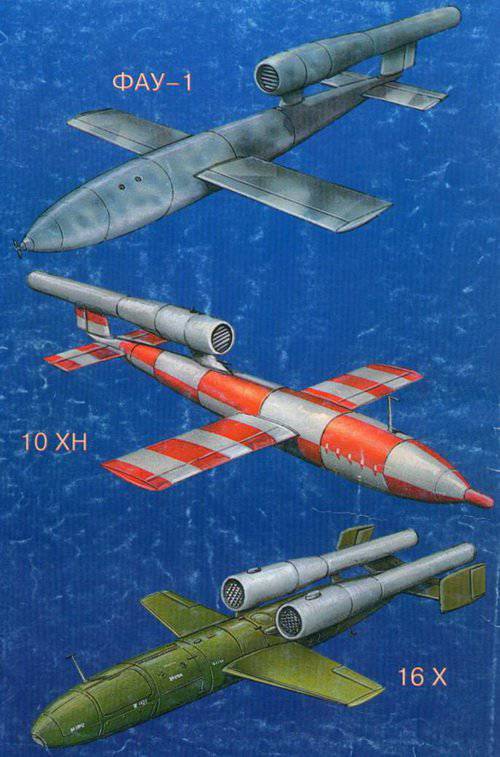 In August, the 1952HA Surfboard self-propelled projectiles passed joint tests in August 16. By that time, the carrier plane had been replaced with a Tu-4, 2 of the 16XA could be placed under its wings. Tests have shown that 16HA as a whole complies with its requirements, but in terms of reliability and accuracy of hitting the target, they are lower than specified. As a result, these shortcomings did not allow recommending an 16HA projectile for adoption. As a result, the 16X projectile repeated the fate of its predecessors 10X and 14X, which remained only prototypes.

Tactical and technical characteristics of 16HA: