The Rise and Fall of the Russian Kingdom 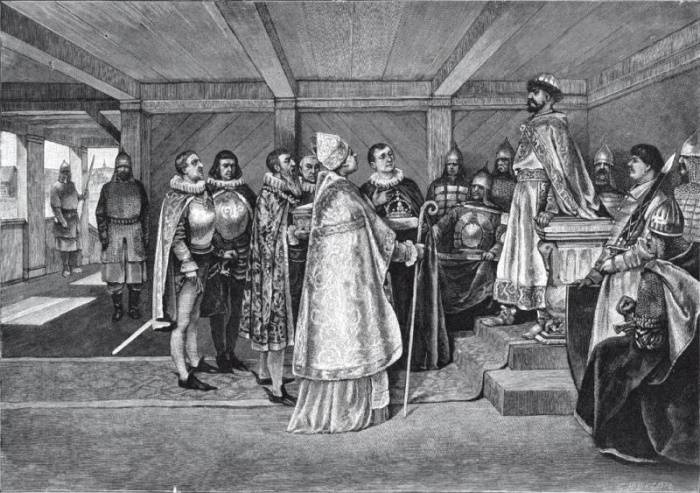 The papal nuncio presents the royal crown to Prince Daniel Romanovich. Engraving by Julian Schubler based on a drawing by Claudius Lebedev from the collection of illustrations of the Niva magazine, 1894

Daniel - King of the Rus

Galicia-Volyn, Chernigov and Kiev lands suffered greatly during the invasion of Batu. Cities were devastated and burned, the population was beaten out, driven into complete captivity. Nevertheless, the reasonable and brave Prince Daniel of Galicia (1201–1264) was able to restore the lands and repelled the encroachments of the Hungarians and Poles (Poles) on Russian lands. Moreover, he launched a counteroffensive, defeated the troops of the Hungarian king Bela in 1249 near the Galician city of Yaroslavl. The Hungarian king, in order to avoid further war, gave his daughter to Daniel's son, Leo. Russian squads led by Daniel more than once smashed the Poles, taking advantage of the swarms in the ranks of the Polish princes.

Daniel reached such power that he even supported his brother-in-law Bela in his struggle for Austria. Pope Innocent VII entered into negotiations with the Galician prince through his envoy and scout Plano Karpin. Rome promised Daniel to help in the fight against the Horde. At the same time, the Roman throne tried to establish contact with the northern Russian princes. So, in 1250, the Roman ambassadors arrived in Novgorod to Alexander Nevsky. Alexander rejected the claims of the Roman throne, preferring an alliance with the Horde.

Daniel, on the contrary, went to negotiations, tried to use the possibilities of Rome in the fight against the Horde. Both sides made several concessions. The Pope recognized Daniil as the "King of the Rus". Not "Ukrainians", but "Russians"!

However, a military alliance could not be established.

Firstly, the West only wanted to use Southern Russia as a shield against the Horde. The throne of Rome could not bend Daniel to its will.

Secondly, the time of the crusades is over. The crusaders went east to plunder wealthy cities, including the ancient Christian Constantinople, idealists among them were a tiny minority (if any). There were no people willing to fight for the idea with the terrible Horde, and even with a high probability of laying down their lives. The Europeans had already fought the Horde and felt its power on themselves. The Pope sent several bulls to Serbia, Bohemia (Czech Republic), Moravia, Pomerania, Livonia and other lands with a call to oppose the "Tatars". But no one responded to these calls.

Daniel promised the pope to make concessions in the matter of the unification of the churches. However, having received the crown, he "forgot" about it. After all, Rome could not provide effective assistance against the Horde. In Rome, they got angry, and the new pope Alexander IV threatened Daniel with a crusade. But these were empty threats. Thus, Daniel did not receive any benefit from negotiations with Rome, only the royal crown, which his descendants also wore.

Daniil and Vasilko Romanovich fought with the Lithuanian prince Mindovg, but could not prevail. Poles and Germans also participated in this war. The war ended in 1254. The agreement between the princes was sealed by the wedding of the youngest son Daniil Shvarn and the daughter of Mindovg. Under the hand of Prince Roman Daniilovich, Novogrudok, Slonim, Volkovysk and other cities passed, although he recognized the supreme power of Mindovg. That is, Daniel recaptured the volosts that the Lithuanian princes had previously occupied. In the early 60s, the Galician-Volyn princes again clashed with Lithuania.

Lithuanian princes in the second half of the XIII century were able to get the Russian Principality of Polotsk, where the princely line of the Rurikovich was interrupted. From the beginning of the 1240s, princes with names of Lithuanian origin increasingly found themselves on the princely throne in Polotsk. Around 1248, after the death of the Polotsk prince Bryachislav, Tovtivil was approved as the prince in Polotsk. In 1310, Prince Konstantin, having no heirs, left the Principality of Polotsk to the Archbishop of Riga. But in fact, the Lithuanians occupied Polotsk and paid the Germans a ransom. 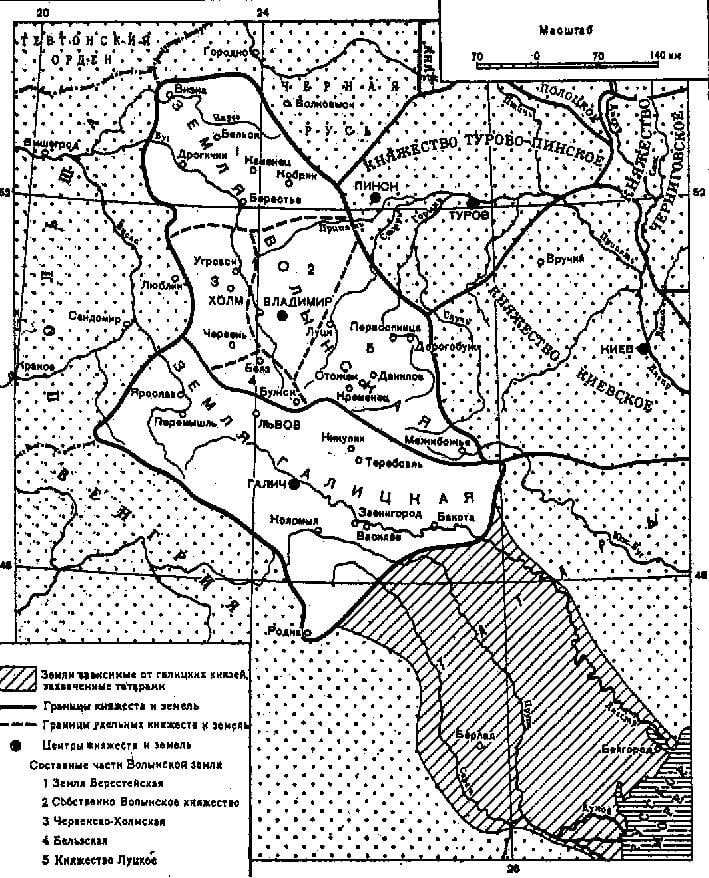 King Lev Danilovich and his attempts to rule Lithuania

In 1264, the Russian king Daniel dies. His son Leo (circa 1228–1301) became king, who shared power with the brothers Mstislav and Shvarn, while their uncle Vasilko ruled in Volhynia. At this time, the possibility arose of uniting Western Russia and Lithuania under the rule of Russian princes. The Lithuanian prince Voishelk was killed in a drunken fight while visiting the Volyn prince Vasilko by Lev Danilovich. Lev proposed his candidacy for the Lithuanian table. Lithuanian nobles refused to accept him. The position of Shvarn Danilovich in Lithuania was precarious, in addition, in 1269 he died. Thus, the first attempt to unite Lithuania and Russia failed.

In 1279, Prince Boleslav of Krakow died. Another brawl has begun in Poland. Prince Leo of Galicia decided to take part in it and proposed his candidacy for the Krakow table. But the local nobles refused him this. The lion raised squads and, with the support of the Horde lord Nogai, began a war for the border territories. Lev was joined by the squads of Mstislav Lutsky's brother, a cousin of Vladimir Vasilyevich Volynsky.

The Krakow campaign of 1280 began, according to the chronicler, "with great pride, but returned with great dishonor." In the Sandomierz region, the Poles defeated the allied army. In turn, the Duke of Mazovia, Leshko Chyorny, who inherited Boleslav, invaded the Galician land in 1281 and burned the city of Perevoresk. In the same year, another internecine war began in Poland - between Leszek the Black, Konrad II Chersky and Boleslav II of Mazowiecki (the last two were the grandchildren of Daniel of Galicia). Lev Daniilovich supported Boleslav. Later, Lev with the Horde again went to Poland, but without much success.

Leo annexed a part of Transcarpathia with the city of Mukachevo to the Galicia-Volyn principality. Also, the Galician king, taking advantage of the weakness of the rulers of Poland and the Czech Republic, conquered the Lublin land in the 1290s.

Thus, Western Russia did not immediately fall under the onslaught of the Polish-Lithuanian feudal lords. In the region, there was a stubborn struggle of various rulers and dynasties with varying success. Rus, Horde, Lithuanians, Poles, Hungarians, Germans and others. No "Ukrainians" were recorded in these wars. The squads of Daniil Romanovich and Lev Daniilovich and their relatives walked around the European lands, smashed and ruined them. Often with or with the support of the Horde. Lithuania could become part of Galicia-Volyn Rus. It just didn't work out.

Few people know about this, that at that time the Russians-Russians and Lithuanian tribes were practically the same ethno-linguistic and cultural community. The Baltic tribes were the last to stand out from the general Balto-Slavic linguistic community. The Russians for the most part, except for the northern and eastern outskirts - "Ukraine", have already adopted Christianity, and the Lithuanians worshiped Perkunos-Perun, the sacred fire - Znich, Veles and other common gods of the ancient Russian faith.

Also, refugees from Central Europe moved to the lands of the Balts for centuries, where there was a fierce battle between the Slavic-Russian clans and the “crusaders”. Therefore, the Baltic tribes for the Rus were not strangers. But this did not prevent the Russian and Lithuanian princes from fighting. In addition, German knights began to push the Lithuanians on the western borders. Some clans and tribes were almost completely slaughtered, baptized with "fire and sword", others united, increasing resistance.

The decline and collapse of Galicia-Volyn Rus

The heirs of Daniel and Leo turned out to be less capable princes, and the external situation obviously worsened. The new Galician prince Yuri I Lvovich (ruled in 1301-1308) and his sons Andrei and Lev Yuryevich (ruled in 1308-1323) began to rely on Poland and the German Teutonic Order in the fight against Lithuania and the Horde, which was a strategic mistake . The Western vector of foreign policy has intensified to the detriment of the Eastern one. And the Horde was a more convenient ally, since it did not particularly interfere in internal affairs, in worldview and faith.

Therefore, the northern, Moscow princes at first relied on the support of the Horde, until it was Islamized and began to decompose. The Western world, on the contrary, crushed and completely "reformatted" the occupied, dependent lands. In addition, the positions of the local boyars, large feudal lords, strengthened again, which weakened the grand ducal power.

The brothers Lev and Andrei Yurievich died on the same day, in a battle with the Horde, according to another version - with the Lithuanians. Vladimir Lvovich Galitsky ruled in 1323-1325, in fact, the boyar council led for him. Vladimir left no heirs and became the last prince from the Rurik line. The boyars called Boleslav to the Galician table - the son of Maria Yuryevna, the daughter of Yuri Lvovich, and the Mazovian prince Troiden. Boleslav converted to Orthodoxy with the name Yuri. He established relations with the Horde, maintained peace with the German Order and Lithuania.

Several letters have come down to us from Yuri II. In one of them, Yuri is called "by God's grace, the natural prince of Little Russia" - "Dei gratia natus dux minoris Russiae" (here the term Little Russia is encountered for the first time). The process of Westernization intensified: the development of foreign trade, the Magdeburg law for some cities, the unification processes between Orthodoxy and Catholicism, the support of the prince on foreigners, etc.

In 1340, the prince died, perhaps he was poisoned by the boyars or the Poles. Yuri left no heirs. The Polish king Casimir III, as a close relative of the Mazovian princes, began to claim the Galician-Volyn table. Beginning in 1346, King Casimir III of Poland added to his royal title that he was "pan and grandfather of the Russian land." Galicia-Volyn principality broke up. A long war began between Poland and Lithuania for the Galician-Volyn inheritance.

As a result, in the 1390s, the Kingdom of Russia (lat. Regnum Rusiae) was divided between Poland and Lithuania. The Polish crown received part of Galicia with the cities of Galich and Lvov, Podlasie, Lublin and the southern lands of Podolia, as well as part of Volhynia with the cities of Belz and Kholm, and the Grand Duchy of Lithuania - Volyn with Vladimir and Lutsk, part of Podolia. The Poles soon abolished the Principality of Galicia, creating on its territory the Russian Voivodeship of the Polish Crown. The Lithuanian principality united the occupied lands into the Volyn Voivodeship.

Russian penny - the name of the coins that were minted in Lviv during the second half of the XIV century for the Galicia-Volyn lands. On the obverse of the coin was placed the monogram of the coin seigneur and a circular legend. On the reverse there is the coat of arms of the Russian Kingdom, a lion walking to the left, and the circular legend MONETA RUSSIAE. In written sources, the Russian penny (Russian, not “Ukrainian”!) is referred to as grossi usuali (“common coin”), grossi numori Ruthenicalis (“Russian account money”), moneta in terra Russiae (“coin in circulation in the Russian earth"), etc.