Su-35S: not appreciated without a worthy opponent

March 10 2022
126
So, according to reports, in the sky of Ukraine, as part of a special operation, the Russian Aerospace Forces successfully used the Su-35S. 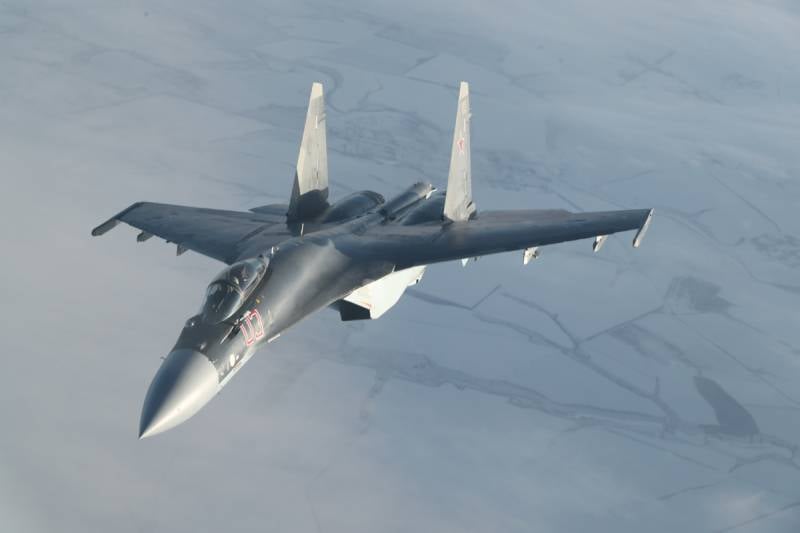 On the one hand, in news there is nothing special, it would be very strange if the use of this aircraft would be unsuccessful. On the other hand, there is something to talk about, because the Su-35S deserves it.

It’s worth starting with the fact that the Su-35S, also known as the Su-35BM (“Great Modernization”), as the project was originally called, represents the end of the Su-27-Su-30-Su-35 evolutionary chain. That is, not just a modification, but a deep modernization of the aircraft, which, in fact, resulted in an almost new car. What we have is a super-maneuverable multifunctional 4++ generation fighter, in which fifth-generation fighter technologies were used.

On-board electronics has undergone significant changes. A new avionics complex, a new radar with phased array, which makes it possible to detect targets at a greater distance, “keep” more targets in the field of view and, of course, fire more targets. And new engines, more powerful AL-41F1S, with thrust vector control. The new integrated control system KSU-35, which performs the functions of several systems at once, used on aircraft of previous models.

The information and control system links the onboard equipment systems into a single integrated system and ensures interaction between the crew and equipment.

Structurally, the Su-35S is more similar to its ancestor Su-27, it will not have a front horizontal tail, an upper brake flap, a shortened tail boom, wings from the Su-33, with flaperons in the entire trailing edge of the wing. The vertical tail area has been reduced, which reduced the radar visibility of the aircraft. 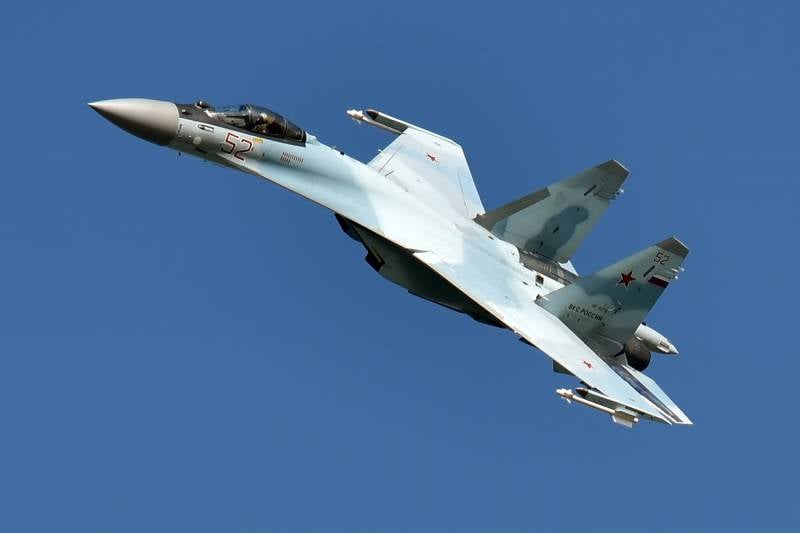 Thanks to modern small-sized electronics, it has become possible to increase the volume of fuel tanks and increase the fuel capacity to 11 kg (for the Su-500 - 27 kg), plus two tanks of 9 kg each can be hung on external holders.

The AL-41F1S engines are a further development of the AL-31F. New larger fan, new high and low pressure turbines, new control system. Higher thrust (by about 16%), up to 14 kgf in maximum mode, up to 500 kgf in afterburner. The engine resource has also been increased by more than 8 times, the overhaul life from 800 to 2 hours, before the first overhaul - 500 hours.

The Su-35S (Irbis-E) radar is a further development of the radar of the Su-30MKI Bars aircraft with a passive phased antenna array with a capture angle of up to 120 degrees.

The Irbis-E radar station makes it possible to detect and track up to 30 air targets while maintaining a continuous view of the space and simultaneously fire up to eight air targets. Air targets "Irbis-E" can detect at a distance of up to 400 km in a field of view of 100 degrees. In a wider sector (up to 300 degrees), the detection range is about 200 km. Ultra-low-observable targets such as UAVs with an image intensifier tube of 0,01 sq. m. are found at distances up to 90 km.

Another new element in the combat system of the aircraft: OLS-35, an optical-location station that combines a heat direction finder, a laser rangefinder-target designator and a television channel. The field of view, detection and automatic tracking of the target by the optical-location station is ± 90 degrees in azimuth. The detection range of an air target by a heat direction finder in the forward hemisphere is at least 50 km, in the rear - at least 90 km. The laser rangefinder measures the distance to an air target in the range of up to 20 km, and to a ground target - up to 30 km. measurement accuracy 5 m.

UAC specialists emphasize that the Su-35S has significantly better flight performance compared to its counterparts already in service and a more advanced set of onboard equipment. 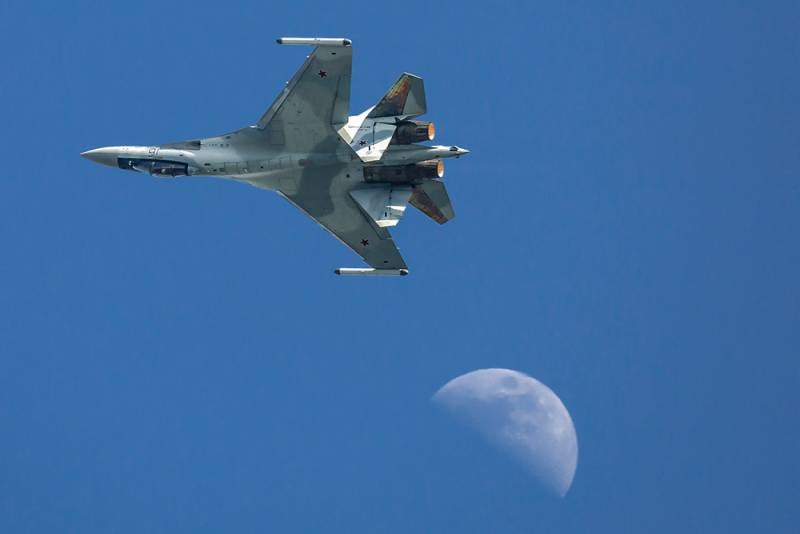 The main competitors on the world stage for the Su-35S are considered exclusively fifth-generation fighters F-35 and F-22A. Similar aircraft of generations 4 or 4+, the European Rafal or Eurofighter 2000 and the American F-15, F-16 and F-18 are not considered serious opponents according to UAC experts.

Moreover, it is believed that at close range, when stealth does not play its role so much, the Su-35S can become a very difficult and unpleasant enemy for 5th generation fighters, despite all their advantages and advantages.

The National Interest called the Su-35 the first on the list of Russia's most dangerous weapons in a hypothetical conflict with the United States. The Americans considered that the maneuverability of the Su-35, coupled with a large combat load, super-maneuverability, the ability to launch supersonic missiles and electronic warfare, made the aircraft an extremely dangerous rival for all American aircraft with the exception of the F-22. And given the state of the Raptors today, it’s for everyone.

In general, in 2019 alone, the Su-35S carried out more than a dozen interceptions of Turkish and Israeli aircraft. Naturally, without the use of weapons. Therefore, we cannot talk about full-fledged military operations, to the greater pleasure of all parties.

Today Su-35S of the Russian Aerospace Forces are taking part in a special operation on the territory of Ukraine. The versatility of the aircraft allows you to work on aircraft, helicopters and UAVs of the Ukrainian Air Force, as well as strike with high-precision weapons on ground facilities of the Armed Forces of Ukraine and terbatov.

According to data from the Russian Ministry of Defense, the Su-35S was used at the entire range of altitudes, from low to high. 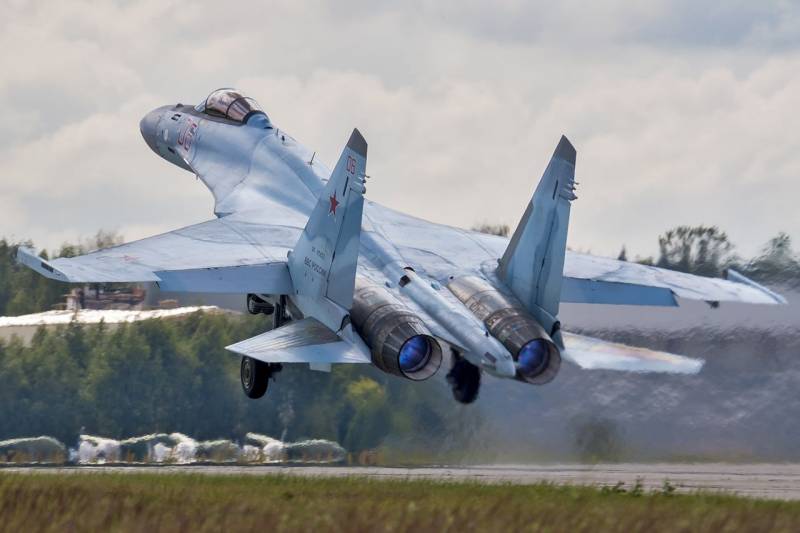 Can the use of the Su-35S be seriously considered successful?

The use of the Su-35S as a carrier of high-precision weapons against ground structures is, of course, beneficial and justified. Especially considering the fact that, despite all the statements, Ukraine still has a place to have air defense. But less complex and promising aircraft are able to cope with such work. And in terms of high-precision weapons, the Su-34 has no competitors at all, a bomber will cope with such tasks much more efficiently than a fighter.

The use of the Su-35S against the Ukrainian Su-27M1 and MiG-29 looks simply not serious. Still, these are aircraft of the last century, modernized in the conditions of the military-industrial complex of Ukraine. That is, laughter through tears. It is enough just to look in the sources what the upgrades of the same Su-27P1M and Su-27S1M are to understand that this is rather a degradation of the once strong fighter. An attempt to turn it into a non-attack aircraft, adapting it to carry unguided airborne ammunition.

So the success of the use of the Su-35S in Syria was due to the conditions of use, when the parties did not set the goal of destroying each other, but were exclusively engaged in preventing each other from performing tasks. 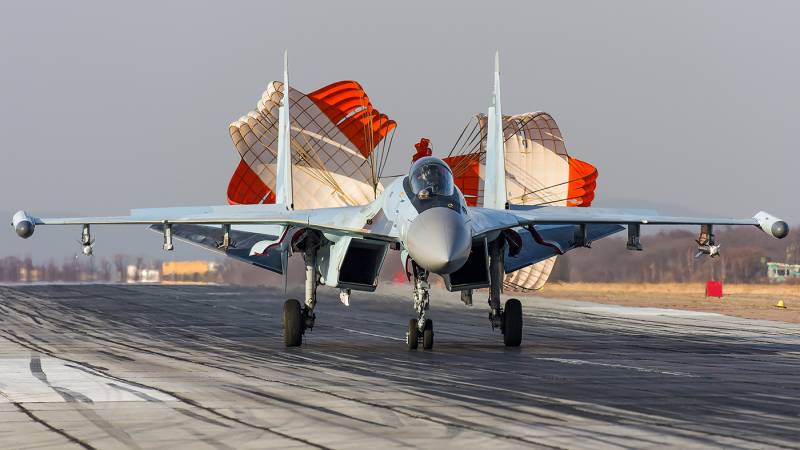 In the special operation in Ukraine, there really are no and could not be worthy rivals for the Su-35S. Those remnants of the Soviet legacy that were somehow repaired and "modernized" in the face of the MiG-29 and Su-27 simply cannot be considered as serious opponents.

So the assessment of the combat capabilities of the Su-35S will have to be postponed until it gets a worthy opponent.

However, I am sure no one will mind if this moment never comes.