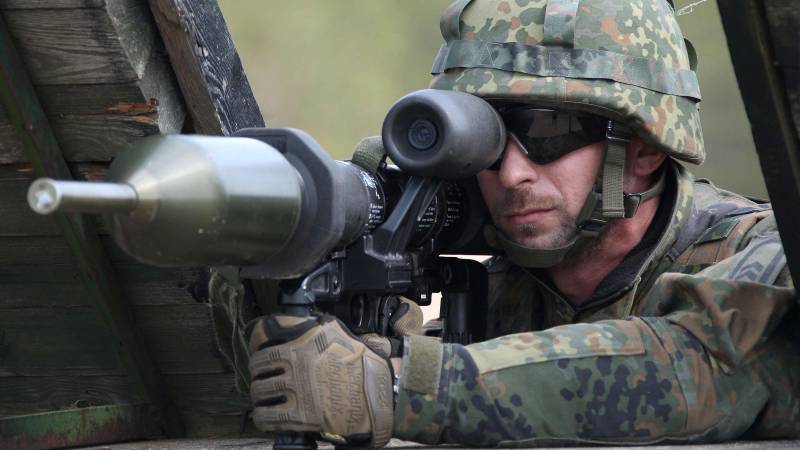 German soldier with RPG Panzerfaust 3. Photo by the German Ministry of Defense

In recent weeks, foreign countries have been massively transferring various infantry weapons to Ukraine, incl. various anti-tank systems. So, several countries at once shared their German-made Panzerfaust 3 anti-tank rocket launchers. It is assumed that such weapon will help the Ukrainian army fight the advancing enemy, but its real effectiveness may be in question.

In the last days of February, official Berlin expressed its readiness to help Ukraine with the supply of various weapons, incl. anti-tank weapons. It soon became known that Germany, among other things, would transfer to the Ukrainian army 1000 Panzerfaust 3 rocket-propelled grenade launchers. It was planned to take the weapons from the warehouses of its own army and transfer them in the coming days.

In addition, Germany allowed third countries to re-export their grenade launchers to Ukraine. Thus, the Netherlands expressed its readiness to share 50 grenade launchers and 400 rounds for them. Italy planned to allocate a certain number of Panzerfaust-3s. 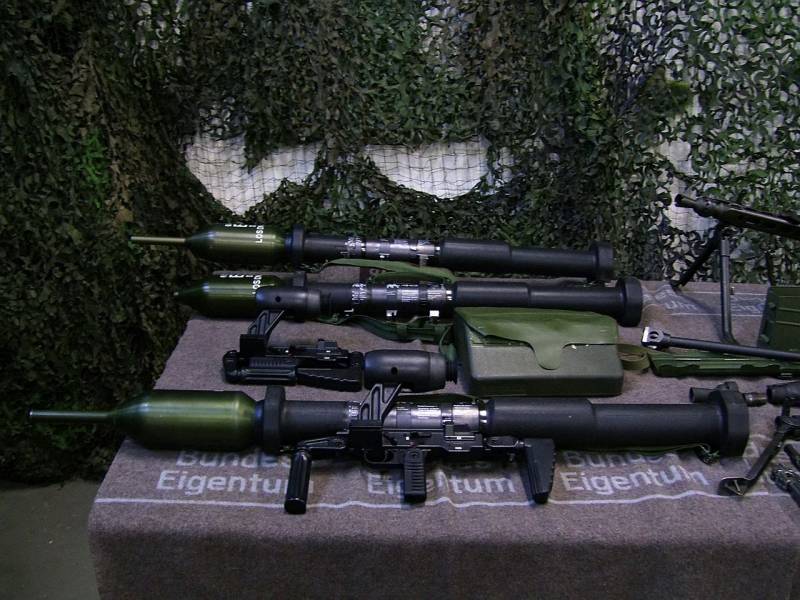 Grenade launchers "Panzerfaust-3" with different shots. Photo by Wikimedia Commons
The first batches of German RPGs went to Ukraine in early March; deliveries continued in the following days. According to known data, weapons are delivered by air to Poland, and from there they are transported by road to Ukraine. What part of the grenade launchers managed to be transferred to the recipient is unknown. It is possible that their transportation has already been completed or is nearing completion.

The other day, reports appeared in the Ukrainian media about the transfer of the first Panzerfaust 3 grenade launchers to the army and territorial defense units. The process of developing new weapons has begun, and in the near future they can be used in battles. At the same time, the results of future combat use are still in question.

For the Bundeswehr and for export

In 1978, the Bundeswehr formed the terms of reference for a new RPG, designed to replace obsolete models. The following year, Dynamit-Nobel AG received an order to develop a full-fledged design and conduct tests. The new project received the working designation Panzerfaust 60/100, indicating the caliber of the barrel and head of the grenade. 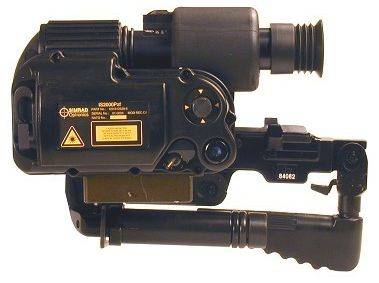 Sighting system Dynarange. Photo by Dynamit-Nobel AG
Tests of the grenade launcher began in 1979-80, and the next few years were spent on fine-tuning it. Only in 1987, the new RPG was adopted under the name Panzerfaust 3 and went into small-scale production. Full-scale production began in 1990, both for the Bundeswehr and for other countries.

The first and main customer of "Panzerfaust-3" was the armed forces of Germany. In 1989, the first export contract was signed: Japan became the buyer. Two years later, a German-Swiss agreement on licensed production appeared. Later, Germany received new orders.

To date, the Panzerfaust 3 has entered service with a dozen countries, mostly European. Most of the customers received finished products, while Switzerland and South Korea acquired a license for their own production. Just the other day, another operator appeared in the person of Ukraine. Its army is being armed by removing RPGs from storage in three foreign countries. 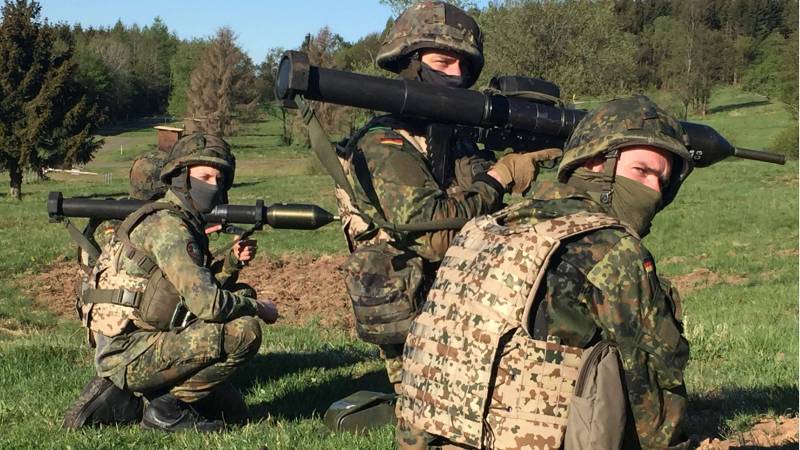 German grenade launchers on exercises. Photo by the Ministry of Defense of Germany

Depending on the ammunition used, the RPG has a length of approx. 1200 mm. Weight in combat position - from 12,6 to 14,3 kg. The weapon can be carried and used by one fighter. Transportation by any transport also does not cause fundamental problems.

The control unit from the Panzerfaust 3 is a folding device with two handles and a shoulder rest. The shot is made using a simple trigger mechanism with a fuse. The control unit is compatible with all types of ammunition and scopes. 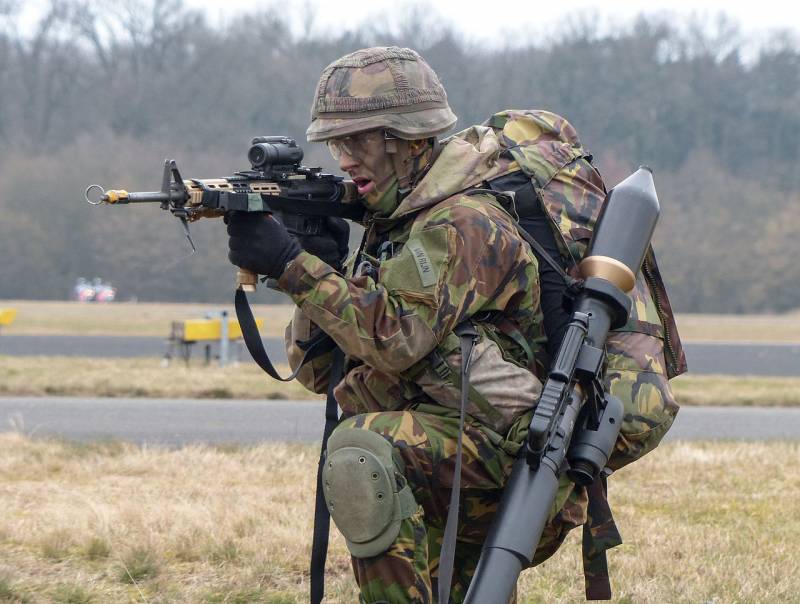 Grenade launcher in the army of the Netherlands. Photo by Wikimedia Commons
In the original configuration, Panzerfaust 3 is equipped with an optical sight. It has a small magnification and is equipped with a reticle with a rangefinder function. The calculation of corrections and guidance are carried out by the grenade launcher independently. For shooting at night, it was proposed to equip the sight with a night vision attachment. Under optimal conditions, a regular sight provides shooting at 300-400 m.

Later, the Dynarange electronic complex was developed based on the Simrad IS2000 "computer" sight. Such a sight is equipped with a laser rangefinder and computing facilities. He must calculate the ballistics of the shot and determine the lead point. Due to electronics, the firing range has been increased to 600 m.

A shot for a grenade launcher is a container-barrel with a grenade, equipped at the factory. The barrel is made in the form of a light tube with a smooth bore of 60 mm caliber. Inside it is placed a grenade shank with a jet engine, a propellant charge and an anti-mass ejected through the rear cut. As a counterweight, plastic granules of the desired mass are used. 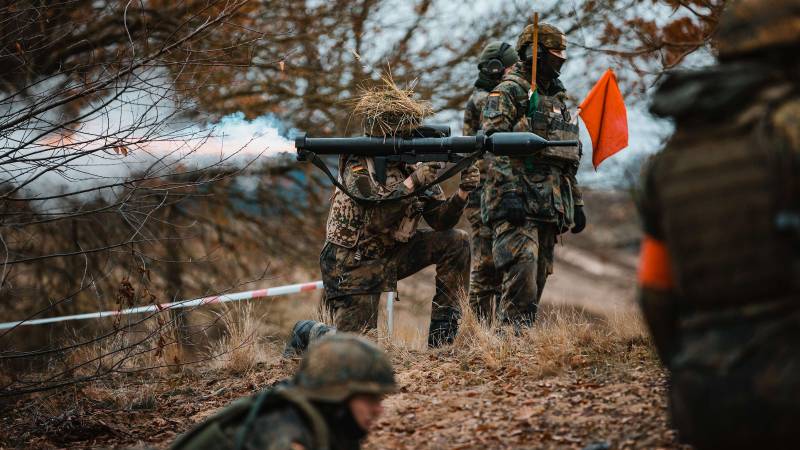 Shot moment. Photo by the Ministry of Defense of Germany
Grenades of all types have over-caliber warheads of various shapes. Some are equipped with a retractable or telescopic rod for a leading charge. The caliber shank of the grenade contains a reactive charge. The initial velocity of grenades of all types is 165 m/s. A unified jet engine accelerates them in flight up to 250 m/s.

There are several types of grenades. The main one is the DM12 with a HEAT warhead penetrating up to 700 mm of homogeneous armor. The more advanced DM21 grenade is equipped with a tandem warhead. Its leading charge is carried forward on a telescopic base. Penetration increased to 800 mm behind ERA.

Bunkerfaust 3 ammunition is designed to fight buildings or fortifications. This is a high-explosive grenade with a detonation delay. It is capable of punching a hole in concrete up to 300 mm thick or in a soil barrier 1-1,3 m thick. There is also an inert practical grenade.

The Panzerfaust 3 product as a whole can be considered a typical modern anti-tank rocket launcher. This weapon is simple in design, not too complicated in terms of operation and capable of showing fairly high performance characteristics. However, it has both advantages and disadvantages. 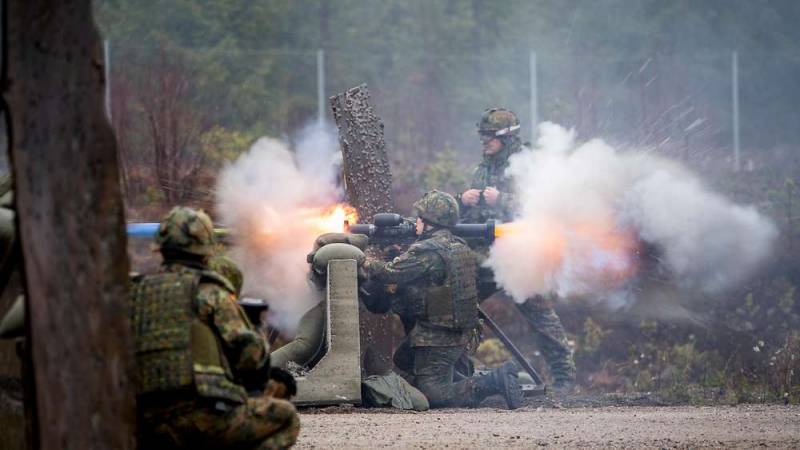 Shot from a different angle. Photo by the Ministry of Defense of Germany
The advantages of "Panzerfaust-3" include small dimensions and weight, as well as a certain ease of handling. Important advantages are given by the chosen scheme with disposable barrels-containers and the presence of several shots for different purposes. This simplifies transportation and preparation for the shot, as well as the possibility of hitting various targets.

In terms of its combat qualities, the German RPG is generally similar to other modern models, although it is inferior to some. So, effective shooting with a standard sight is possible only at 300-400 m, while for the older RPG-7 this parameter reaches 500 m. At the same time, the limited range is compensated by high penetration - the Panzerfaust 3 is ahead of other samples in this parameter.

However, the implementation of the entire technical potential of the grenade launcher is associated with well-known difficulties. Thus, firing at tanks from distances of less than 300 m poses a danger to the grenade launcher. Penetration up to 800 mm behind the DZ does not guarantee the defeat of a modern MBT in the frontal projection, and shooting at other areas of the reservation is not always possible and / or safe. 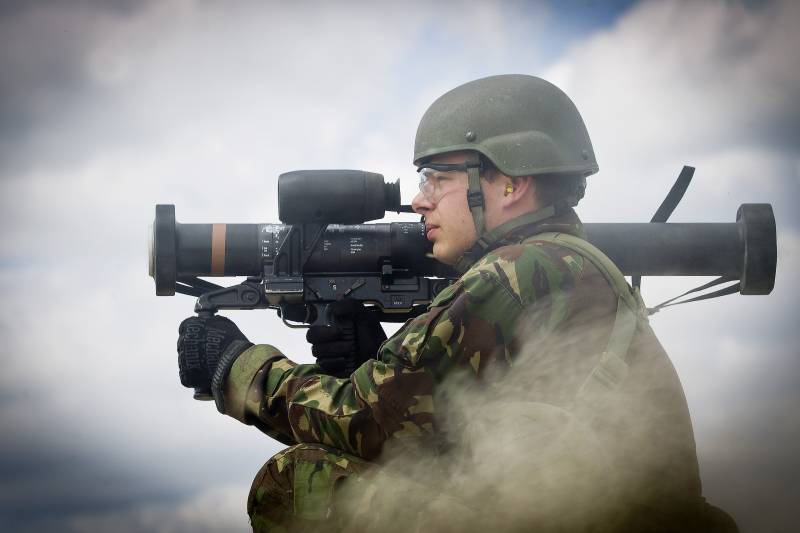 Grenade launcher after firing. Photo by the Ministry of Defense of Germany
In addition, there is another factor characteristic of the modern Ukrainian army. For the correct and effective use of the Panzerfaust-3, the grenade launcher must complete a full training course with a theoretical and practical part. It is unlikely that Ukraine will be able to organize the normal training of personnel.

Despite its considerable age, the Panzerfaust 3 anti-tank rocket launcher is still one of the best examples of its class. It shows good performance and is operated by many countries. With it, their armies get the necessary anti-tank capabilities.

Ukraine recently added to the list of operators of such weapons. In the shortest possible time, more than a thousand grenade launchers and a significant number of barrel containers were handed over to her. However, it will not be possible to realize the potential of this weapon. They will not be able to fully master it and will not have time, and in addition, a considerable part of the grenade launchers will be destroyed along with the warehouses or abandoned during the retreat.