The grouping of troops involved in the Special Military Operation has recently replenished with a new unexpected combat unit. An armored train of the railway troops was involved in solving combat and humanitarian tasks. He has already ensured the evacuation of the civilian population from the combat zone and can now begin to solve new tasks of various kinds.

The first information about the appearance of an armored train in the Special Operations zone refers to the day and evening of March 7 - then the corresponding photos and videos appeared on social networks. It was reported that the train was moving from the Crimean side and at the time of the shooting was in the area of ​​Melitopol. The letters "Z" were present on the sides of the cars, clearly indicating their belonging.

Which of the available armored trains of the ZhDV is involved in the operation is unknown. His goals and objectives were also not disclosed until a certain time. However, this did not prevent the train from attracting great attention of the public both in our country and abroad. Armored trains have not been involved in work in the zone of real conflicts for a long time, and such an event could not go unnoticed.

On the evening of March 8, the goals of the first "raid" became known. As it turned out, several foreign states turned to Russia with a request to help in the evacuation of their citizens from the conflict zone. The Russian side organized and carried out such an operation. The removal of foreigners was carried out by a passenger train, and the armored one provided its wiring and cover in a potentially dangerous territory.

Reportedly, 248 people were evacuated from the Melitopol area, incl. 38 children. These are citizens of eight countries in Europe, Africa and Asia. Two trains, armed and passenger, without difficulty made their way through the southern part of Ukraine and went to the Crimea, to the city of Armyansk. From there, foreigners were to be sent to Sochi for a subsequent flight home.

Apparently, now the armored train must return to the railway network of the demilitarized Ukraine and continue to perform certain tasks. It can be expected that in the near future the Ministry of Defense will again talk about the activities carried out and the successes achieved.

It should be recalled that the Russian Railways still has several armored trains built in the last years of the USSR. This technique was actively used during the second war in Chechnya and in subsequent counter-terrorism measures. After their completion, in 2009 a decision was made to disarm and mothball the four existing trains. However, already in 2016 they were returned to service. Since then, armored trains have regularly appeared in various exercises, and now one of them is participating in a real military operation.

Available materials from the Ministry of Defense, domestic media and witnesses "on the ground" allow us to carefully consider the armored train used, determine its composition and assess its potential. At the same time, some of the possibilities have already been shown in practice. 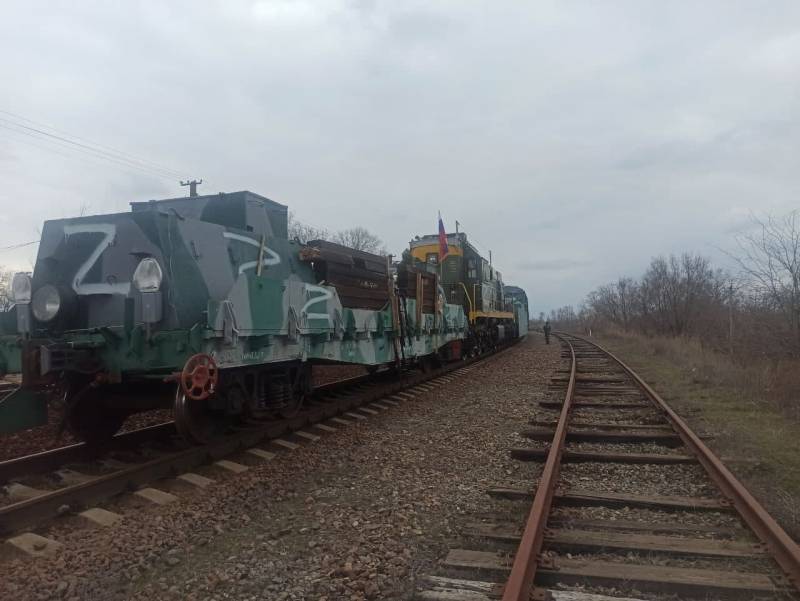 In the photo and video, you can see that there was an armored platform at the head of the train, probably taken from the BTL-1 "armored gun". Behind it is a diesel locomotive of the TEM18DM type. Also in the composition there is an armored staff car and two platforms with artillery. There are passenger cars for transporting personnel and a platform with an unknown cargo under a camouflage net.

According to known data, cars for domestic armored trains are protected from small arms weapons and shell fragments. In some sections of the structure, protection against small-caliber artillery is provided.

The main armament of the armored train in its current configuration is four double-barreled ZU-23 mounts, placed two by two on two armored platforms. In addition, the train crew has personal weapons. He probably has other systems at his disposal to protect against air attack, armored vehicles, etc.

Also in the public domain there is another photo of an armored train with the sign "Z", which differs from other materials. It shows the armored platform and platform; the last one contains the standard container. Perhaps this is the "Melitopol" armored train at one of the stages of the current operation, before unloading or other events. In addition, such a photo may indicate that two trains were involved in the Special Operation at once. However, there are no official data on this. Perhaps the Ministry of Defense will clarify this issue.

The armored train involved in the Special Operation has a number of characteristic features that determine its combat and other capabilities. It is capable of performing a fairly wide range of tasks, and some capabilities of this kind have already been shown in practice during a recent humanitarian mission. 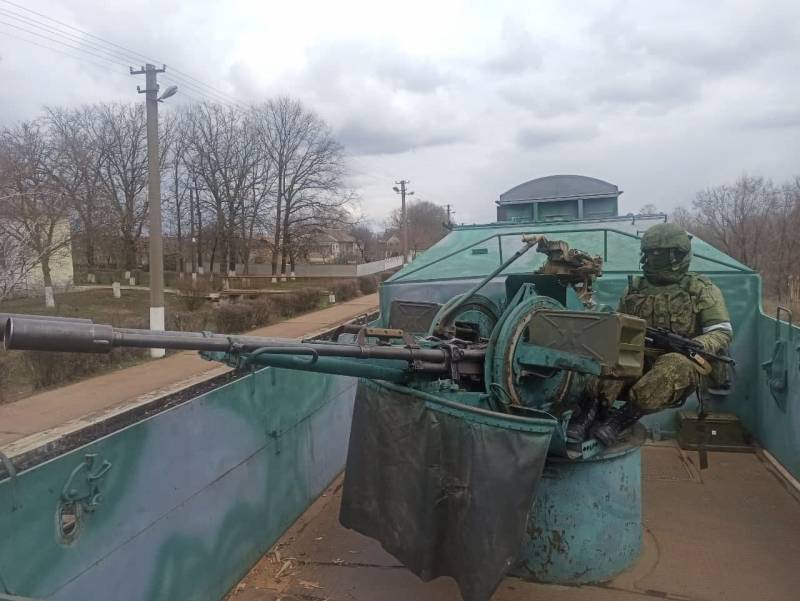 One of the 23 mm mounts on armored sites
Despite the dependence on railways, the armored train has a fairly high mobility. Using existing routes, it can quickly arrive at a given position. At the same time, the configuration of the railway network provides access to almost any strategically important areas.

The armored train is resistant to shelling with a wide range of weapons and has means of protection against explosive devices. At the same time, it has its own weapons, which allow it to fight against various targets on the ground and in the air in self-defense or attack. In any situation, the armored train will repulse the limited forces of the enemy, and in more difficult conditions, it can count on air support or the help of ground formations.

A combat unit of this kind is quite capable of effectively solving various tasks - with reference to railways. An armored train can participate in almost any activity that requires protection and firepower on the tracks or in their immediate vicinity.

The train can carry out reconnaissance of the tracks and determine their condition, and, if necessary, cover the repair units. Depending on the situation and the assigned tasks, it is capable of supporting any other units operating near the tracks with fire.

The task of the armored train is also patrolling in order to exclude sabotage and ambushes. In addition, he must accompany civilian and cargo trains, protecting them from possible attacks. Similar possibilities were shown the other day during the flight from Melitopol. 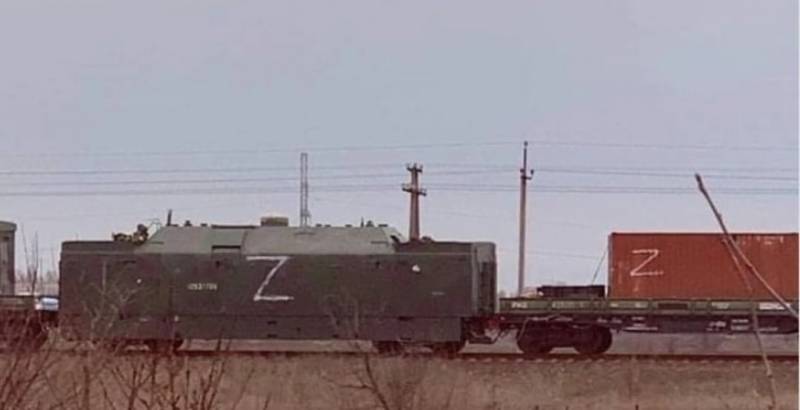 The armored train can also perform transport functions.
There is some potential for empowerment. So, according to the experience of service and operation of past years, an armored train can be additionally equipped with platforms with tanks on them. In this case, the possibilities for observation, search and destruction of targets increase significantly. On the same platforms, it is possible to transport the necessary goods, which simplifies the organization of logistics in hazardous areas.

Naturally, there are also limitations. So, modern domestic armored trains are hardly capable of waging an equal and effective battle with enemy tank units or artillery. In addition, they are vulnerable to air attacks.

However, the competent use of an armored train allows you to drastically reduce the risks and get the maximum benefit. So, in the conditions of the current Special Operation, one no longer has to worry about a possible attack from the air due to the defeat of the combat aviation enemy. Large ambushes with heavy weapons are also unlikely - for the same reasons. At the same time, sabotage on the tracks, ambushes and shelling are still possible.

Thus, despite the seeming archaism, the armored train remains a completely modern and relevant combat unit. It is capable of effectively solving various combat and auxiliary tasks on and near the railway network, and therefore retains its importance for the troops. At the same time, objective shortcomings of various kinds can be easily overcome through competent planning and application.

Part of the advantages of modern armored trains was shown just the other day. The train of the Russian Railways passed from the Crimea to Melitopol and checked the safety of the route, and then led the train with refugees in the opposite direction. As far as we know, we managed to overcome the entire path without any difficulties. However, apparently, the work of the armored train does not end there, and there will be new tasks for it.