Ukrainian projects for the modernization of the MLRS BM-21 "Grad" 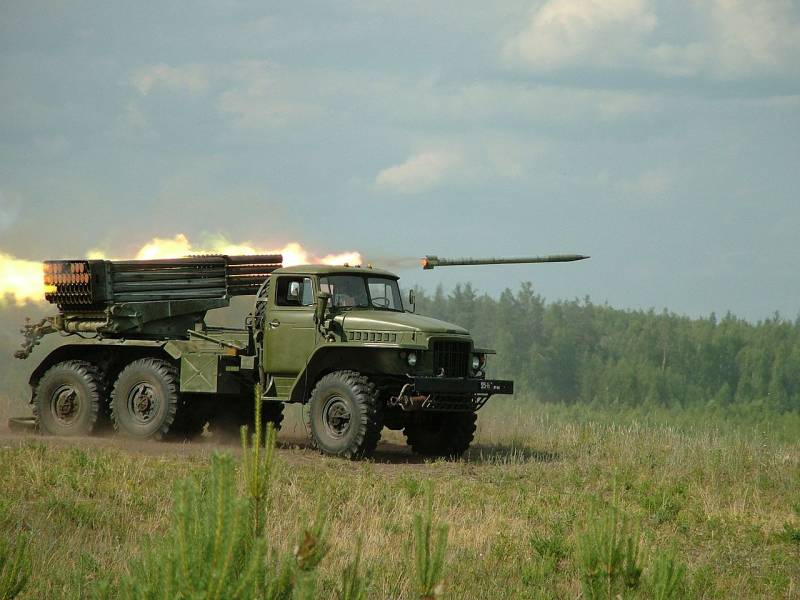 With the collapse of the USSR, independent Ukraine got a large number of BM-21 Grad multiple launch rocket systems. Later it became clear that the operation of such equipment could not continue indefinitely, and the army needed to update its fleet. In the following years, several projects for the deep modernization of cash MLRS were presented, and some prototypes went through the entire test cycle. However, the real prospects of all such developments remained in question.

The first attempt to modernize cash MLRS was made in 2001 by the Kharkov Design Bureau named after. Morozova and the Kharkov Plant of Special Machines began the development of the BM-21K project. It proposed to keep the existing artillery unit and missiles, but transfer them to the Ukrainian KrAZ-260 chassis. It also provided for the renewal of communications and fire control.

For various reasons, work on the BM-21K dragged on. The design was completed in a few years, but testing and refinement continued until 2008. The upgraded Grad showed the required level of performance and coped with the tests, but was not recommended for adoption. 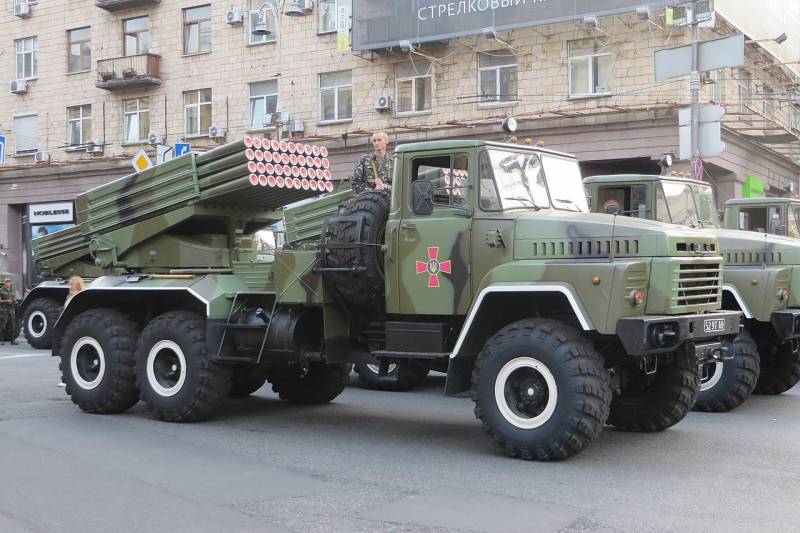 Ukrainian "Bastion-01" on the KrAZ-6322 chassis
The reason for this was the outdated chassis. The KrAZ-260 car was discontinued in the mid-nineties, and its use in the project at the end of the XNUMXs did not make sense. However, KMDB and KHZSM managed to build and transfer several combat vehicles to the army on such a base, after which their assembly stopped.

Due to the failure of the BM-21K project, the development of new variants of the MLRS began. In 2007-2008, the same enterprises began to create a promising system called "Bastion-01". In this project, it was planned to combine all the advantages of existing weapons and a new chassis.

The KrAZ-01 truck was chosen as the basis for the Bastion-6322 MLRS, shortly before that it was accepted for supply to the Ukrainian army. This is a three-axle all-wheel drive vehicle with an engine capacity of at least 300 hp. and sufficiently high characteristics of carrying capacity and cross-country ability. It was proposed to transfer the standard equipment of the Grad to it with virtually no changes. Only individual devices were introduced, while the launcher and other products remained the same. 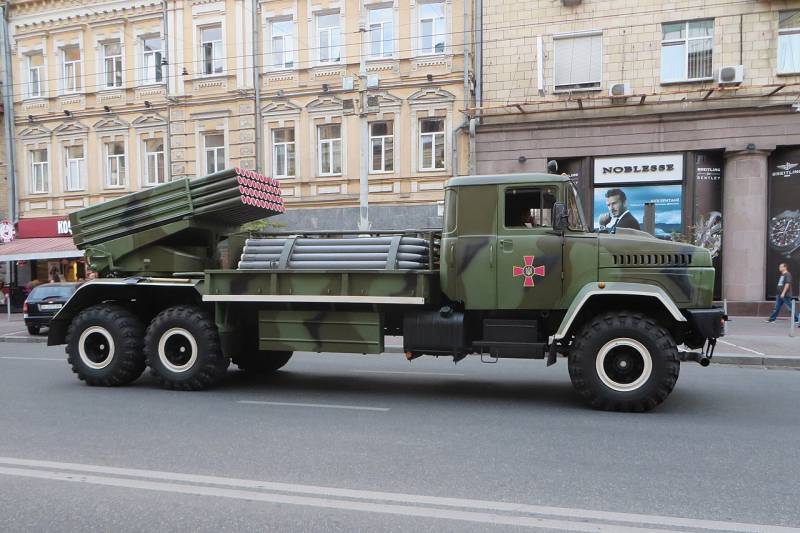 "Bastion-02" with an extended landing gear and additional shells
The Bastion-02 combat vehicle was also developed on the extended KrAZ-6322 chassis. Additional space on the cargo platform, between the cockpit and the launcher, was used to accommodate the so-called. fast reload systems. An additional 40 rockets are placed in special mobile clips, which simplifies the preparation for a new salvo.

The first prototype of "Bastion-01" was built in 2009 at the Shepetovsky repair plant and soon went to the test. Later they made a car model "02". The equipment coped with the checks and was recommended for adoption. However, a mass series could not be established. Despite the simplicity of production, in a few years no more than 8-12 machines of two modifications were manufactured. In the middle of the tenth years, the release of "Bastions" ceased.

With the letter "U"

Simultaneously with the Bastion, another modification of the Grad was created at the KMDB on a new chassis - BM-21U or Verba (Verba / 1). The goals of the project were again to replace the chassis and upgrade the means of communication and control, while the artillery unit was not affected. This should take into account the negative experience of the previous project BM-21K. 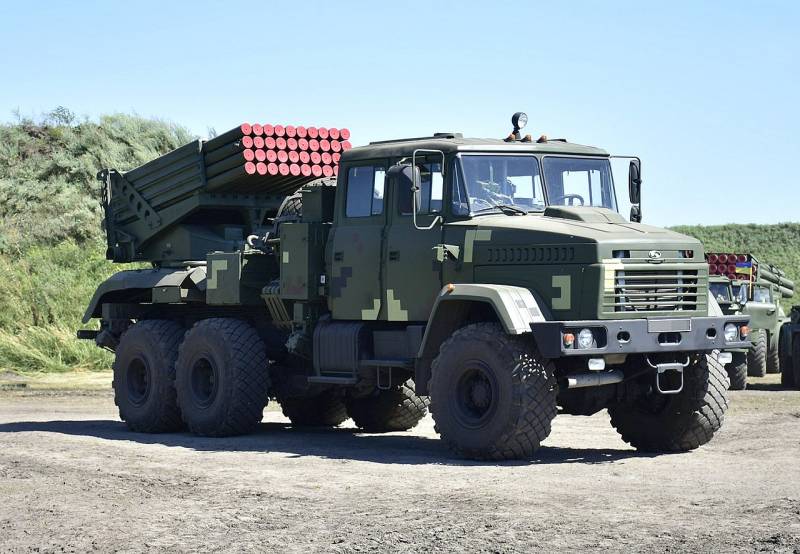 BM-21U "Verba" on a modern KrAZ-6322 chassis
The Verba project differed from the BM-21K and Bastion in greater complexity, which led to a delay in development. The main work on it was completed only in the first half of the tenth years. An experimental car was first openly shown in 2015. Subsequently, various tests were repeatedly reported, as well as the imminent adoption and production of a series.

However, adoption was delayed, but only in the case of the Ukrainian army. So, in 2017, several Verbs were acquired by the armed forces of Senegal. Orders were also expected from other countries in need of relatively simple but effective MLRS.

The situation with the Ukrainian army cleared up only in November 2019. Then the Ministry of Defense announced that the Verba MLRS had passed state tests and was put into service. By that time, it was already known that the Shepetovsky repair plant would master mass production. Delivery of the first products is expected in the coming months.

However, production did not start within the specified time frame. Moreover, the official order to put the BM-21U into service came out only at the end of August 2021. It is curious that in this document the Verba is designated as the BM-21U Grad. Why this happened is not clear. In addition, there are certain violations of the governing documents, which gives the situation a special appearance. 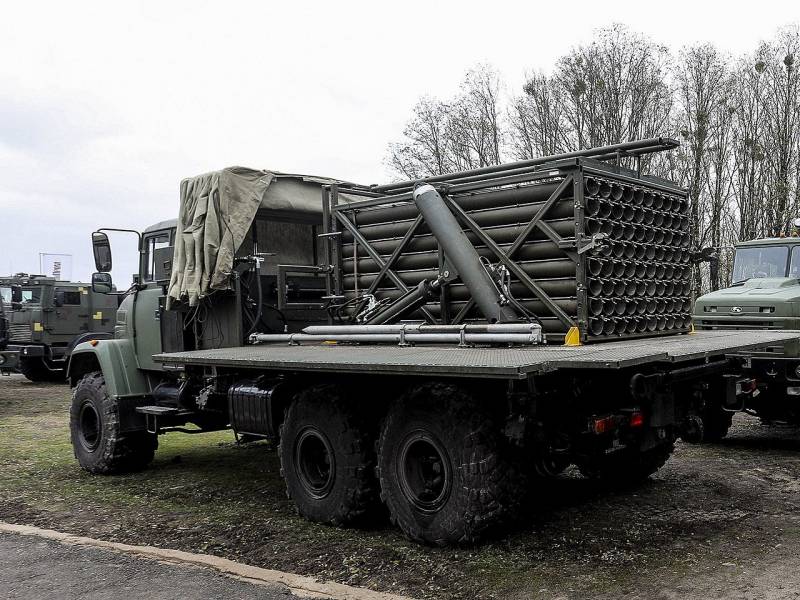 Transport-loading machine "Verba" in working position
The BM-21U project provided for the transfer of the existing launcher to the modern KrAZ-6322 chassis. The Verba uses a truck with a two-row four-door cab, which accommodates the entire crew of five people and the necessary instruments. The Verba uses a new digital fire control system, a stabilizer, satellite navigation and other devices that improve shooting accuracy. New means of communication with a protected mode of operation were also used.

The BM-21U combat vehicle is complemented by a transport-loader, known by the code of the Classifier of weapons, equipment and property of the Ministry of Defense "VK 001-2000-A2112011Y". It carries two full sets of 80 rounds of ammunition and has mechanized loading equipment that simplifies the preparation of the combat vehicle for firing.

Since the mid-21s, the Shepetovsky Repair Plant has been developing a new version of the Grad under the designations BM-XNUMXUM and Berest. Unlike the previous ones, this project included the restructuring of the artillery unit and the development of new ammunition. Due to these and other solutions, it was supposed to increase accuracy and accuracy, as well as the firing range and salvo volumes.

The first open display of "Berest" took place at one of the Ukrainian exhibitions in October 2018. Then it was argued that the new MLRS has improved performance and is necessary for the army. Soon the prototype was handed over for testing. In the recent past, factory testing has been reported successfully. The enterprise-developer was ready to accept orders for mass production. 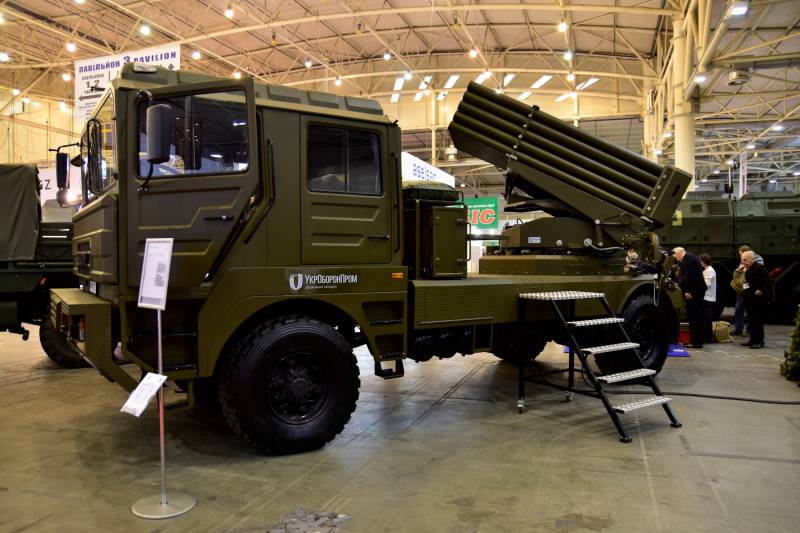 Experienced combat vehicle BM-21UM "Berest"
MLRS BM-21UM is built on a two-axle chassis KrAZ-5401NE. This is a cabover vehicle with a two-row cab and an engine of 300 hp or more, depending on the configuration. A machine with a gross weight of more than 17 tons is capable of moving on roads and terrain.

"Berest" received an updated launcher. Its main difference lies in the presence of the fifth horizontal row of guides, as a result of which the ammunition load has been increased to 50 missiles. The installation is electrically driven, although manual mechanisms and a mount for the sight are retained.

The MLRS is equipped with a control computer, to which are connected means of communication, navigation and topographic location, as well as guidance mechanisms. Provides remote control of all processes of preparation for firing and firing. A remote control is also provided.

Over the past two decades, Ukraine has been trying to update the fleet of its MLRS. Various options for the modernization of existing "Grads" and other combat vehicles were developed, loud statements were made, and even orders were issued for adoption. However, the real results did not justify all hopes. As a result, for 20 years of work, the army received only a few combat vehicles. 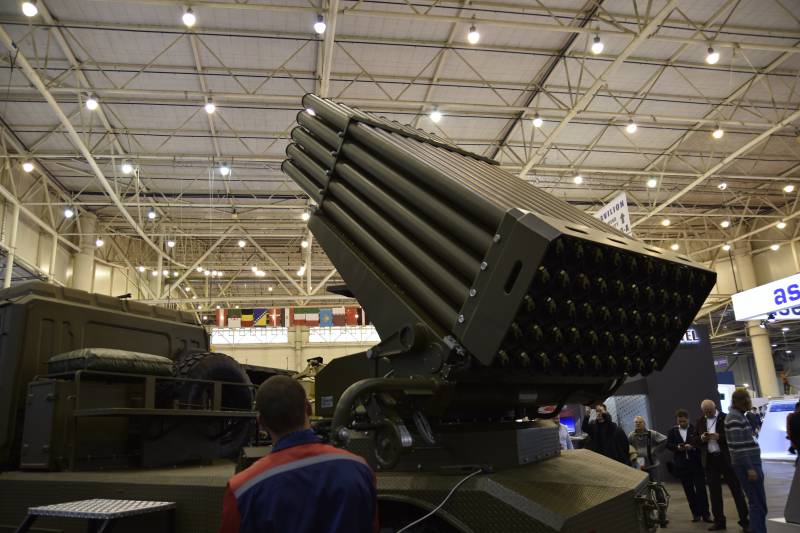 Enlarged launcher "Beresta"
Thus, the BM-21K project ended with the assembly of no more than 5-10 combat vehicles, moreover, on an outdated chassis. Similar results were shown by two projects of the Bastion line. The total number of such MLRS did not exceed 10-12 units. The newer and more advanced BM-21U "Verba" passed the necessary tests and was even put into service, but information about mass production and deliveries to the Ukrainian army has not yet appeared. The newest development, BM-21UM "Berest", has not yet passed the entire test cycle and is not ready for the series.

As a result, despite all the plans and efforts, in two decades the army received no more than 15-20 multiple launch rocket systems of several types for a 122-mm rocket projectile. The situation is further aggravated by the fact that this is only the modernization of old equipment, and it does not always use modern components and products.

As a result, the Ukrainian army is forced to continue operating the old Soviet-built BM-21 systems. According to the IISS The Military Balance 2021, until recently, she had up to 185 of these combat vehicles. As a result of recent events, the MLRS fleet has noticeably decreased, and new losses are expected in the near future.

Thus, all the efforts of Ukraine to create its own version of the "Castle", mass and modern, were wasted. Production has not been established and, given recent events, it will no longer be possible to start it. However, the Ukrainian industry still had a reason to be proud. In parallel with the modernization of the BM-21, the Smerch system was being updated. And her new version "Alder" was brought to a series of noticeable size.