28 September 2012
30
A modern soldier is forced to bear an increasing number of weapons, systems of protection, reconnaissance of the terrain and tracking the enemy. At the same time, the number of computing systems that inform the soldier about the current combat situation in real time is growing. Unfortunately, the soldiers cannot just take all the necessary equipment and equipment physically. Indeed, in addition to the fact that the weight of the uniforms is limited by its physical capabilities, the soldier still needs to conduct active military operations, moving easily and quickly to the battlefield. In order to help the soldier on the battlefield in the United States decided to develop a unique exoskeleton or "smart" jumpsuit that would help solve the problem of carrying weights.

Currently, the next "smart" jumpsuit is created by scientists from Harvard University, it is assumed that he will be able to help soldiers to overcome long distances, while carrying a rather heavy load on him. The work on the creation of overalls involved in the Institute of Bionics Wis (Wyss Institute for Biologically Inspired Engineering), part of the Harvard structure. Currently, the institute has received a contract from DARPA - the Office of Advanced Research Programs of the Pentagon. The amount of funds transferred under the contract is 2,6 million dollars.

According to the published information, the new jumpsuit is made from elastic and soft materials. In order to help fighters move, reducing the load on their muscular system, new elastic sensors will be used to help determine the biomechanics of body movement. The use of these sensors will eliminate the bulk and solid components that can be found in other systems of this kind and exoskeleton, which very often significantly hamper the movement of the soldier. 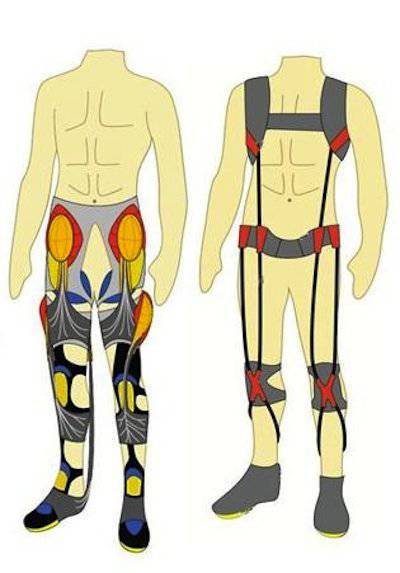 In addition to systems that have an instant response and provide assistance to a fighter while moving, the balance will be used as part of the jumpsuit, which will produce low-frequency oscillations that coincide with the movement of the center of gravity of a person during his movement. At the same time, the project being developed by DARPA can find wide application in the civil sphere. For example, this "smart" clothing will be able to significantly increase the strength and endurance of older people, who, due to their age, already limit themselves in movements and movements. It is also safe to say that these technologies will be used among people suffering from disorders of the musculoskeletal system.

This costume allows its owner to carry tens of kilograms of various goods on himself or in his hands without any visible effort. Currently, the American company Raytheon is working to improve the second model of its XOS 2 exoskeleton. At the moment, an operator in such a suit, when loading and carrying weights, can replace 3 soldiers. At the same time, unlike a number of other developments, XOS 2 is capable of quite rapidly working out the movements of its operator, so that the person inside the exoskeleton does not feel trapped inside a very strong, but at the same time unhurried and slow-witted piece of iron. The accuracy of the response of the exoskeleton allows its operator to even play with a football.

The new exoskeleton, in contrast to the XOS-1, has an increased carrying capacity, and also has an increased ratio of the weight being lifted to the perceived man. So if at XOS-1 this ratio was equal to 6 to 1, then at XOS-2 it is already 17 to 1. Despite the fact that the exoskeleton itself weighs almost 90 kg (which is 10% less than the previous model), for a human operator, its weight does not exceed the weight of a regular jacket. At the same time, the new development uses less energy - by 50% and is more resistant to the negative effects of the environment. 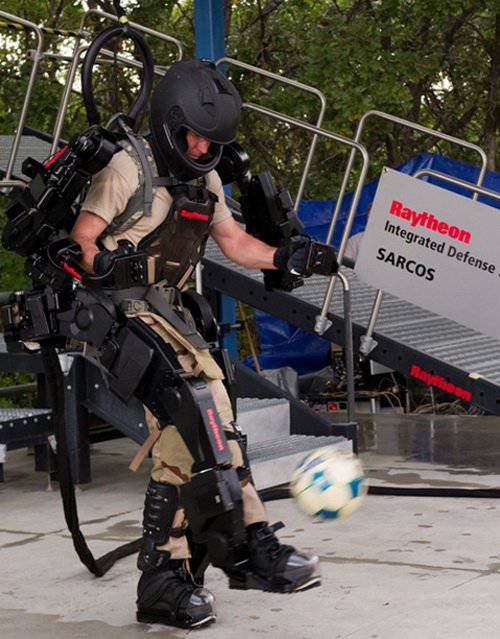 During a demonstration demonstration of his work, test engineer Rex Jameson several times put and removed large-caliber artillery shells weighing 95 kg from a special stand, feeling at the same time a real weight somewhere at the level of 5,5 kg. All this allows you to perform hard physical work, spending a minimum of physical effort. In the same way, Rex Jameson, during a demonstration of the costume's capabilities, easily punched a package from 4's three-centimeter boards with his fist. Repeat this trick can not even the most trained martial arts masters.

According to Raytheon's specialists, soldiers dressed in such exoskeletons can significantly accelerate the unloading or loading of ammunition, fuel, water both in the rear and in the theater of war. The ability to transfer alone without the help of friends tank shell or aviation missile means that more people can be involved in other tasks. The first XOS exoskeleton proved to everyone, including the creators, that this idea is workable. Taking into account the experience gained, Raytheon has devoted all its efforts to optimizing its design, from the sensor system and the frame to the entire power drive. As a result of this, in their second development, they managed to increase the energy efficiency of the exoskeleton.

The extremities of this suit are driven by high pressure hydraulics, but the power supply is still outside the suit itself. So for now, the real Iron Man is still tied to stationary equipment with long hoses and cables. However, in this form, this costume can be quite useful, and in the near future, engineers are going to completely “untie” their exoskeleton from a separate power source. 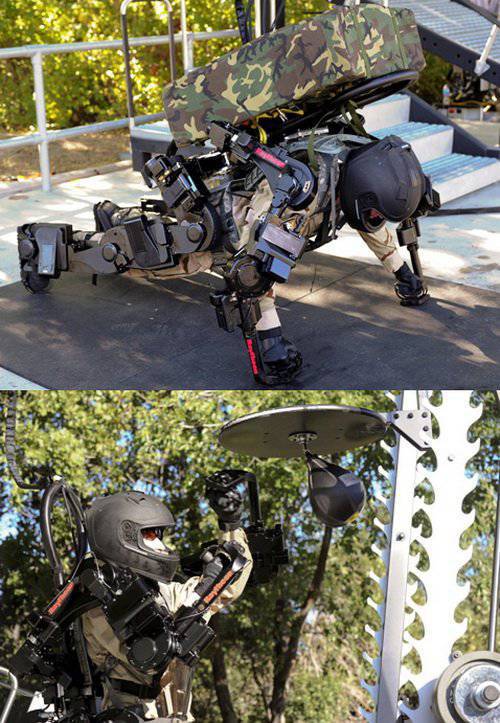 According to Fraser Smith, Raytheon's vice president, the deployment of exoskeleton is inevitable. This product is extremely necessary, and I look at them as a completely viable solution to a number of current issues. The creators of this suit say that a large physical load on military personnel during a variety of warehouse and transport operations is a negative point, which not only reduces the speed of work, but is also an unnecessary risk factor and source of injury. The proposed exoskeleton can get rid of all these problems. In the future, the engineers of the American company do not allow the appearance of an armored and hardened version of their offspring, which will be used to smash doors and walls in hostage rescue operations.

At one time, Lockheed Martin created a universal exoskeleton, called HULC (Human Universal Load Carrier). Its purpose is to facilitate the movement of fighters who operate in isolation from their main forces. In such conditions, modern soldiers are sometimes forced to carry over 60 kg. various goods, including ammunition, food, electronics and a large number of batteries, which are designed to supply various electronic equipment. The original version of the exoskeleton HULC was powered by lithium-polymer rechargeable batteries, which powered not only the electro-hydraulic system of the suit, but also other military electronics. 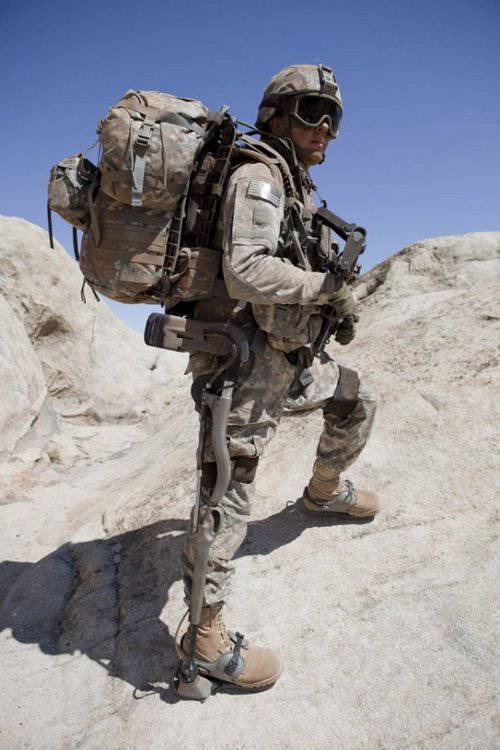 This exoskeleton in the near future can be met on the battlefield. Its basis is 2-e "legs", which are made of light, but at the same time durable titanium alloy. The role of "muscles" in this exoskeleton is performed by the hydraulic system, and lithium-ion batteries are used as an energy source. The capabilities of this exoskeleton are truly unique and able to impress anyone - the total weight lifted with its help can reach 140 kg. The only condition is that it is necessary to properly distribute the load on the device. For example, a weight of up to 100 kg can be hung on the rear frame of the Hulk, and additional load can be placed on the shoulders of the suit.

One of the most important parameters of the exoskeleton is the duration of its autonomous operation. And here Lockheed Martin managed to reach a high level. The battery charge is sufficient to move at a speed of 5 km / h over 4 hours. Thus, the exoskeleton allows you to make a forced march in full display at a distance of 20 km. At the same time today, this unit is in the process of improvement. The main direction of work is related to the improvement of the work of the suit in extreme conditions.

According to representatives of the company Lockheed Martin, the development of a new power source for the robotic exoskeleton HULC company will be Protonex Technology Corporation. This company is faced with the task of ensuring the autonomous operation of a device designed for the needs of the military, for 72 hours. In order to realize such a long duration of work, it was decided to turn to the technology of fuel cells. It is assumed that the entire power system will be located on the exoskeleton itself and will be able to serve other electronic devices of the fighter. The development of these power sources has received much attention, since the existing solution with lithium-ion batteries is clearly insufficient for conducting long-term combat operations outside the city and accessible electrical grids. 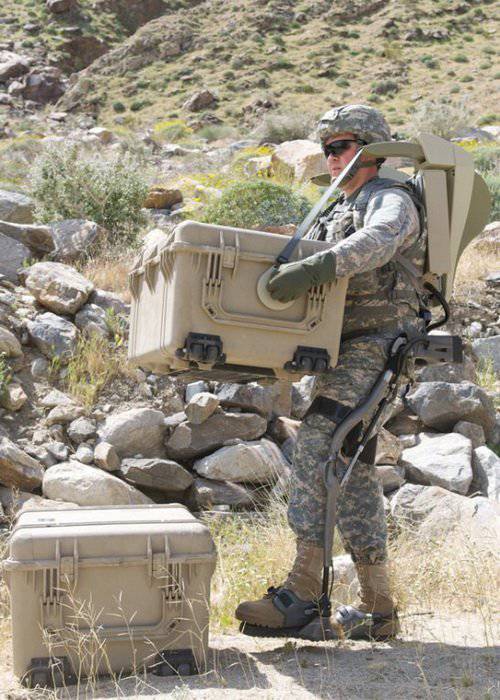 It is worth noting that the company Protonex has extensive experience in creating compact and lightweight fuel cell systems, which are used as mobile batteries with a capacity of 100-1000 watts. The company's products are in demand in the commercial and consumer markets, as well as in the military sector. Such a solution in the form of fuel cells is necessary for an autonomous anthropomorphic mechanism with an electro-hydraulic drive, which is the “Hulk”. The exoskeleton microcomputer registers the movements of its operator and then controls various parts of the device accordingly, the flexibility of which allows it to crawl, crouch and carry loads with minimal human effort.