Academic leave in the soldiers' ranks

14 May 2010
0
The number of recruits the Ministry of Defense will try to increase by hook or by crook. 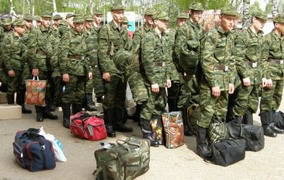 This week began the active sending of draftees to the Russian armed forces. During the spring campaign, 270 600 people will be called. Meanwhile, the Russian government with the participation of the Ministry of Defense is planning a set of measures to increase the draft base in the country. On the existence of problems in recruiting troops, as is known, Dmitry Medvedev, another 5 of May, said during a visit to the Moscow 5-th separate Taman motorized rifle brigade.

According to NVO sources in the Ministry of Defense, at the same time, the presidential administration and the military department agreed and approved the basic principles for improving the draft system. The president, as you know, assured the public that the term of the urgent service will not increase. Meanwhile, the country's leadership in the near future will go to unpopular measures aimed at annually recruiting at least about 800 thousand recruits into the army. This is due to the fact that, according to the officially announced concept of giving the Armed Forces a new look, by the end of 2010 in the million Russian army only 150 thousand officers and 90 thousand contract soldiers will be left.

The rest of the army and fleet will consist of military personnel serving on conscription. But where to get so many of them? A source in the Ministry of Defense told NVO about the main measures to increase conscription resources. Firstly, in the near future the number of universities will be significantly reduced, where students will be deferred from conscription. This will happen despite the fact that on the eve of the celebration of the 65th anniversary of the Victory, the Chief of the General Staff of the Armed Forces Nikolai Makarov disavowed the statements of his deputy, head of the Main Organizational Directorate of the General Staff Vasily Smirnov that the Ministry of Defense is proposing a drastic reduction in the number of deferrals from military service and recruitment to it students. Deferrals for students in the law will leave. But they will be “tied” to military service by conscription not with the help of the new law “On the Military Duty of Citizens of the Russian Federation”, but more “prosaically” - by a government decree. At the suggestion of the General Staff, Prime Minister Vladimir Putin will determine the list of universities that will be given new state accreditation. Basically, state educational institutions that have a state order for the training of specialists for state enterprises and institutions of the country will fall on this list. University students who will not have state accreditation will be drafted into the army from the first or second year, having received something like “academic” leave for a year.

In addition, according to the interlocutor of the NVO correspondent, the presidential administration agreed with the proposals of the General Staff to partially increase the draft age. Its ceiling, of course, will not be as big (that is, up to 30 years), as General Vasily Smirnov suggested on the eve of the May holidays, but the increase will still be - most likely, young people will be called up to 29 years. This was partially confirmed on the eve of Victory Day and the head of the General Staff.

In the draft prepared by the Ministry of Defense of the new law “On the military duty of citizens of the Russian Federation”, which, after the approval of the government together with other legislative initiatives of the military department (on improving the money allowance of servicemen and on new social benefits for them), will soon be submitted to the State Duma the term of the spring draft campaign (from April 1 to September 1) and increased citizens' responsibility for evading military service. Under the new bill, the state is invited to abandon agendas for citizens of draft age. They will be obliged to come to the military registration and enlistment office at the appointed time in order to determine their further military fate, that is, the direction to
military conscription. Failure to be equated to a criminal offense.

The new military laws will clearly spell out the mechanism for preparing draftees for military service. Including legitimize as the main subject teaching in all schools of the basics of military service and obtaining a military specialty in DOSAAF organizations. This, by the way, the other day, Vladimir Putin promised war veterans.