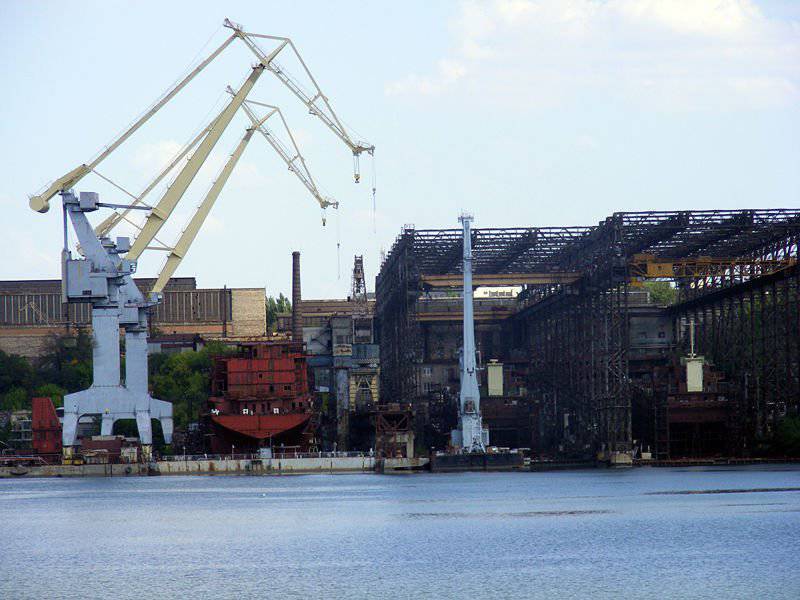 The problems associated with the development of Ukrainian shipbuilding concern not only people working in this field. They are also interested in a large number of people who are not indifferent to the fate of one of the most developed sectors of the national economy, which was inherited by the Ukrainian state from the Soviet Union. Unfortunately, today it is impossible to say that Ukraine’s position in the world as a maritime state is very high. Over the past decades, Ukrainian shipbuilding companies have lost their positions not only in the international market, but also within the state. As for the sea itself fleet, then it is largely outdated - most of the vessels do not meet international requirements.

In recent years, the government promises to take all necessary measures for the development of military shipbuilding. Such measures are necessary, because if during the Soviet period Ukrainian shipbuilding companies were fulfilling orders for military purposes, during the period of Ukraine’s emergence as an independent state, these companies survived mostly only through the construction of civilian ships.

At present, there is a possibility that after all, Ukrainian military shipbuilding will be able to be revived. Today, Ukrainian shipbuilders have several orders of a defensive nature. So, in particular, the forces of the Feodosia shipbuilding company “More” are building a patrol boat “Orlan” for border guards, as well as four air-cushion landing craft “Zubr” for the Chinese naval forces.

Ukrainian shipbuilders themselves recently, not without pride, declare that foreign customers trust them not only to build ship hulls, but also to install various “stuffings” in them. In particular, in 2011, the Black Sea Shipyard delivered the Netherlands two hulls with ship mechanisms and systems that had a readiness level of the order of 60-70 percent. But, as time has shown, such success was not at all short-lived. And the reason for this is quite simple: the fact is that the ship equipment in Ukraine is practically not produced, but gets into the shipyards as temporarily imported into the customs territory of the country. Therefore, it turns out that at first this equipment needs to be cleared and then exported with the ships, which is too expensive.

Therefore, Ukrainian shipbuilders will be able to make ships with full "filling" only for the domestic market. And there are not so many customers in Ukraine. So, the Nikolaev plant "Ocean", which came under the control of the company "Smart Holding", continues the construction of pusher tugs for farmers (holding "Nibulon"). Last year, the third of the 12 order units was launched. However, it is impossible to say that such cooperation will be long-term, since the holding’s management has suspended this investment project, not having the confidence that the authorities will “give the nod” to work in the grain market.

Another Ukrainian plant, the Black Sea Shipbuilding Plant, received an order for the state-owned Corvette program in 2011. The construction of the lead ship of the program was laid in the spring of this year. Completion is planned for 2016 year. In addition, up to 2021, three more ships must be launched. At present, it makes sense to say that the construction works for the state image. Moreover, according to experts, for such a small series (total 4 of the ship) construction is too expensive (agree that 16 billion hryvnia (about 2 billion dollars) is an impressive amount), but if we talk about the size of the ship, it is rather a frigate, but no corvette.

Whatever it was, but last year all the work on the construction of the ship was practically suspended, because there were not enough funds for this. This year the situation looks a little better - it is planned to allocate about 433,5 million hryvnias (about $ 54 million) from the state budget to finance this program. But provided - does not mean at all highlighted. This statement was particularly relevant in the light of personnel changes. Recall that it was precisely the problem of the fleet's defense capability that repeatedly became the cause of harsh criticism of the head of state against the then military minister M. Ezhel. As for the new head of the department, Dmitry Salamatin, he is far from new to industrial policy issues. A program "Corvette" can be an excellent demonstration of the effectiveness of his work as minister.

Part of the defense order is supposed to be performed by the Sevastopol Marine Plant. Basically, these orders are associated with the repair and modernization of the ships of the Ukrainian naval forces. In addition, the city authorities of Sevastopol planned to order the plant to build passenger boats, and for that even 16 million hryvnias (about 2 million $) were allocated. However, the Prime Minister of Ukraine N. Azarov criticized such initiatives. Despite this, it should be noted that even initiatives that ultimately were not implemented give a positive result. After all, if until recently most of the publications wrote that the plant’s work was completely stopped, then in 2011 there were already publications that the production volumes increased several times, wage arrears were repaid (although no specific figures were mentioned) .

As for the Feodosia shipbuilding company “More”, it also has a small number of local orders. In particular, in 2011, she won a tender for the construction of the Coral Marine Security Ship, and by 2020 should have released six such ships, the cost of each of which is 160 million hryvnia (about $ 20 million).

If we talk about the external market, then here there are certain opportunities for Ukrainian shipbuilders to improve their positions. So, for example, the unification of the three Ukrainian shipyards in Ukraine - Kherson, Black Sea and Nikolaevsky - under the control of the “Smart-Holding” mentioned above will provide an opportunity to provide potential customers with a wider range of offers. Each of these plants has its own specialization: the Black Sea Plant - military shipbuilding, Kherson - tankers, Nikolaev - medium and large-tonnage vessels.

In 2011, the Kherson plant laid down the 3 oil tanker for the SVL Group (Malta), and its management assures that the company is loaded with orders up to the 2013 year. At the Black Sea Plant, in addition to the corvettes and the orders already mentioned above for Holland, last year the construction of the freezer trawler-fish factory, which was named “General Troshev”, was completed. The order was received from the Preobrazhenskaya Base of the Trawling Fleet company from Russia. The company then issued another contract for the construction of the trawler.

The Theodosia Plant also did not remain without an order. He builds small hovercraft amphibious assault ships for China, the value of the contract is estimated at 350 million dollars.

As for Russia, the situation in this direction does not look very good. A few years ago, the Ukrainian government was embarrassed by hopes that Russian customers would load orders for Ukrainian shipbuilders, because then Russia began to actively modernize its fleet. After the signing of the Kharkiv Agreements in 2010, many Ukrainian experts were confident that in gratitude, the Russians would build their ships at Ukrainian factories. Moreover, something similar was stated by Mikhail Nenashev, a member of the State Duma Committee on Defense. According to him, Russia planned to build 15 warships in Ukrainian enterprises as part of the fleet renewal program. But, as time has shown, the assurances of Russian politicians remained empty words, and other shipbuilders received orders for construction.

The Ukrainian leadership could not come to terms with such a state of affairs, which caused delays in signing an agreement to replace the ships of the Russian Black Sea Fleet with new ones. The Ukrainian side is striving for the Russians to coordinate each of their steps and provide a complete list of new ships, and the Russian side, in turn, demands the granting of maximum freedom of action. Thus, it can be assumed that this agreement is unlikely to be signed at all.

In addition, it is necessary to take into account the fact that Russia is seeking to update its fleet with new ships equipped with the latest modern technologies. Therefore, it is of great importance for the Russian government not only to want to load their enterprises with work, but also to ensure that these enterprises have gained more experience.

So, for example, in 2011, the construction of the new-generation anti-mine defense ship Alexandrite began. Its hull will be made of fiberglass, and it will destroy mines at a safe distance using the latest high-performance sonar stations.

In addition, according to experts, there is still a big question: does Russia really strive to update the fleet, because by and large the presence of its ships in Sevastopol is a matter of more prestige. Thus, it is obvious that Ukraine does not have to rely especially on Russia. In addition, she herself is engaged in the export of warships.

Thus, if we take a small summary of what has been said, then it must first be noted that, in general, the situation on the world shipbuilding market is not very favorable for Ukraine. If last year the world fleet, especially the container and tanker fleet, had tremendous growth rates, and foreign shipbuilding enterprises had orders for the years ahead, today it is obvious that many of them are also experiencing certain difficulties due to the difficult economic situation in the world.

Viktor Lisitsky, Vice-President of the Association of Ukrainian Shipbuilders, is confident that the government should take an example from the recognized dealers in this industry - China and South Korea, who are actively financing this industry - to improve the situation in the shipbuilding industry of Ukraine. And, besides, it is necessary to integrate enterprises according to the cluster principle, that is, within a single enterprise, to combine design, research centers, and direct production.

However, if the Ukrainian shipbuilding enterprises will have orders for the construction of modern warships - this will be a good experience. But here the main thing is for the government to change its financing policy, stabilizing it, and not allocating about a quarter of the amount claimed, and then at the end of the year from special funds.