Fake is like a weapon: the main thing is not to get carried away

March 2 2022
30
I perfectly understand Ukrainians. They are very scared today. It is very scary for those who try on life in Donetsk and Luhansk. In cellars with stale air, feeling the earth tremble from explosions - yes, it's scary.

Of course, the Ukrainians really want the valiant Armed Forces of Ukraine to be able to resist and push the aggressor back, but... But they want to.

Modern man is so accustomed: he lives in the flow of information and he just needs to receive it. And preferably one that is digestible and brings positive emotions.

In this regard, the Ukrainian media did an excellent job. They showed everything that could raise the spirit of the population and inspire confidence. And they did not disdain anything.

Since we have no information from our side, from the first day, like everyone else, we had to work with what came from Ukraine. After our people walked through the towers, there are doubts that the information flow will remain at the same level.

Perhaps this is not entirely bad, because from the first moment I had to deal mainly with filtering incoming information. And here all data of a false nature can be divided into two parts: erroneous information and outright lies.

Currently, there are literally a couple of channels on our side that deal with revelations. Very little, given the size of the disinformation that the Ukrainian side is spreading and which is believed in Ukraine.

Since we are still being read in Ukraine, for these people we will give a few examples of how Ukrainian sources lie.

1. The attack on the TV tower in Kyiv led to the death of civilians through the fault of our army

Here it is worth starting with the fact that the Ministry of Defense of the Russian Federation warned in advance that they would shy away from the tower. And it demanded, right in the spirit of the Israeli military, to remove the residents of nearby houses and employees of the television center in order to avoid unnecessary casualties.

The fact that the warning was heard confirms the statement of the TV center management that there were no casualties among the employees. Naturally, no one began to evacuate the houses located next to the repeaters. This is, as it were, good material for propaganda about Russian aggression. But - it worked out.

And after a while, from an hour to two, videos began to appear, which depicted the “victims” of Russian aggression. Killed civilians of the city of Kyiv. 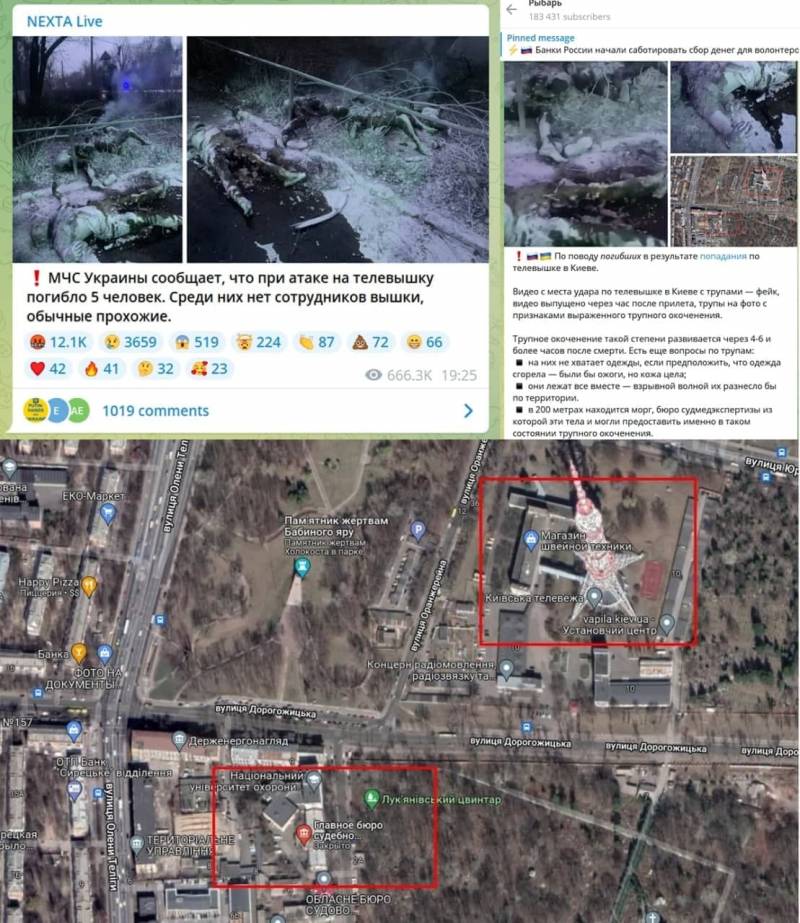 There are doubts here. Starting from how the bodies lie (all face down for some reason) to the fact that there is no damage corresponding to the explosion.

The secret is revealed very simply: from the very beginning of the special operation in some cities of Ukraine, morgues stopped giving out the bodies of the dead precisely for the purpose of using them in such productions. That is why they are all face down. The same thing, by the way, was on the video from Kharkov. Everyone is lying face down so that you can’t see on the video that these people died a long time ago.

In Kyiv, the forensic medical examination bureau is literally 200 meters from the television center. So that's where it could have come from. In Kharkov, by the way, a little further away, about 2 km, but not particularly critical. 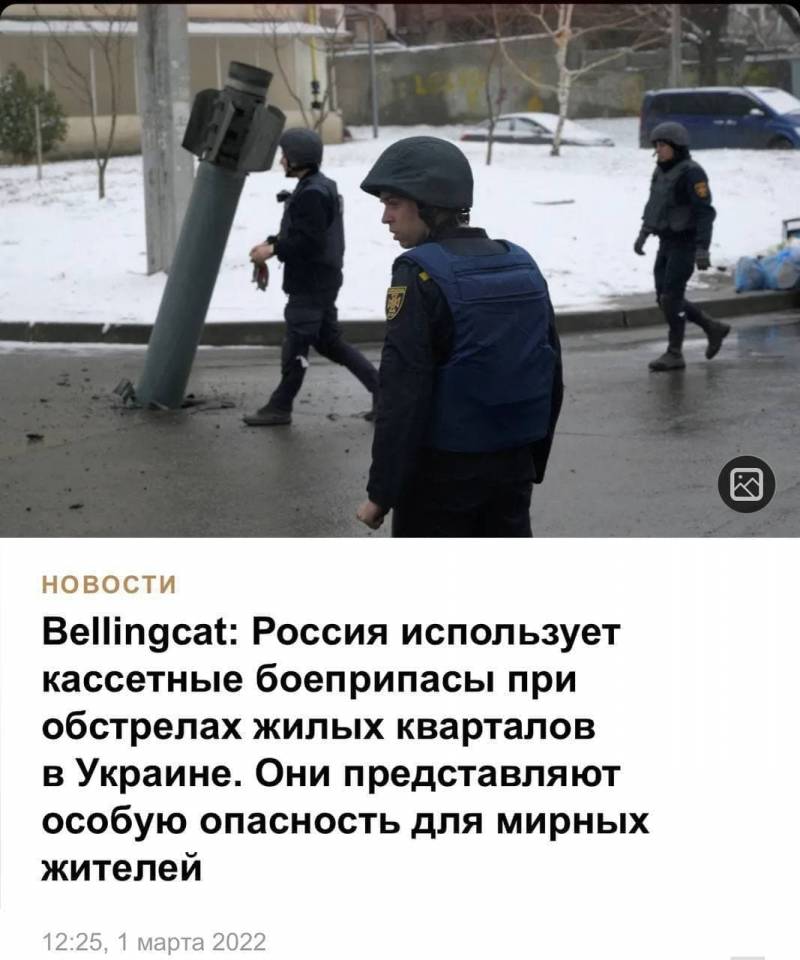 Let's step back a bit, shall we? There were hundreds of such “cluster” ammunition in the DPR and LPR. 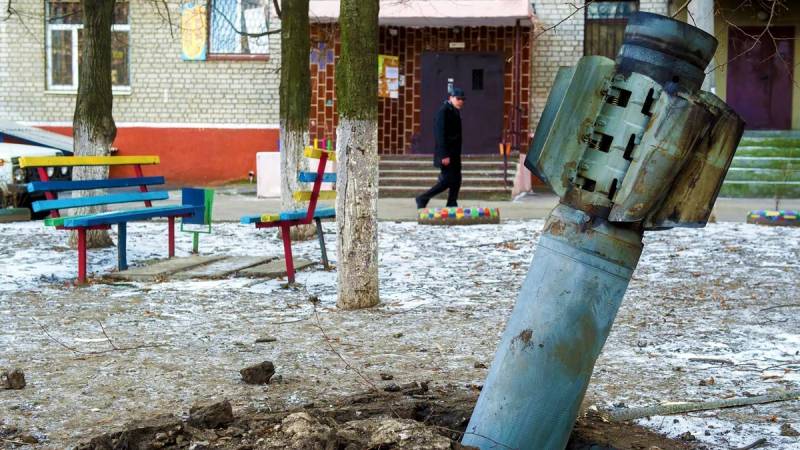 It is worth remembering that the Armed Forces of Ukraine have at least 150 MLRS installations of the Smerch and Uragan types, which can easily fire the same projectiles at abandoned cities in order to attribute everything to the Russian army.

If ours really used cluster munitions, then there would be dozens, if not hundreds, of corpses in urban areas. Plus, the cassette, from which submunitions are separated, greatly increases the area of ​​\uXNUMXb\uXNUMXbdestruction. So that would have gone to the houses, which is not in any of the photos.

The specific photo provided by the Ukrainians shows an ordinary accelerator, which is not ammunition and does not pose a danger, unless, of course, it falls on something like a car.

Total: an example of unsubstantiated stupid information that does not correspond to reality.

The video was seen by everyone who did not see it - it is very clearly visible how the projectile falls in front of the OGA and explodes. Naturally, the Ukrainian side presented this as a hit by a Russian cruise missile. And even some on our side, out of illiteracy, picked up this utter nonsense. 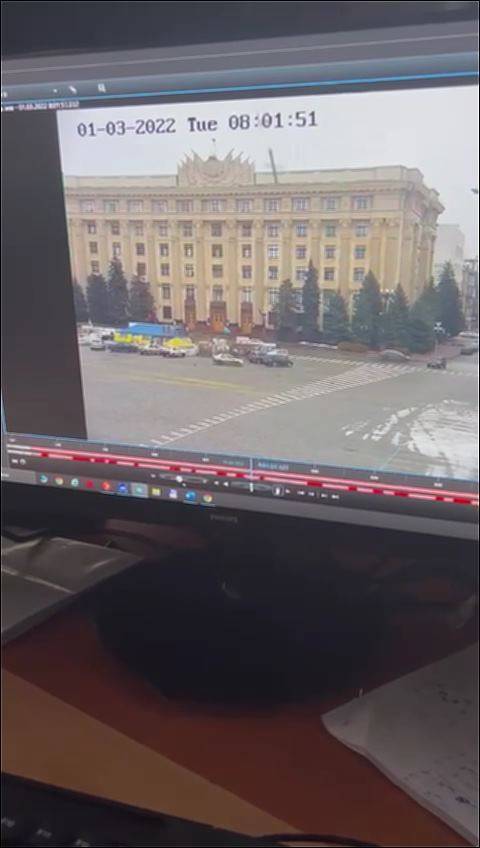 In general, the Ukrainians came up with a good idea. Say, Azov was supposed to meet in front of the Regional State Administration. It is difficult to say for what devil, in theory, the regiment should have been in position for a long time and fight the invaders. And they, you know, decided to go to the Maidan, hold a rally. Well, or something else, fantasy fails, to be honest.

The Russian side, having learned about this, decided to strike. And she did. But “Azov” did not come to the rally, because there were no victims either.

We look. It is perfectly clear that this is not a cruise missile. This is the most common projectile from the large-caliber MLRS of the "Smerch" or "Hurricane" type. Which, I repeat, the Armed Forces of Ukraine also have. 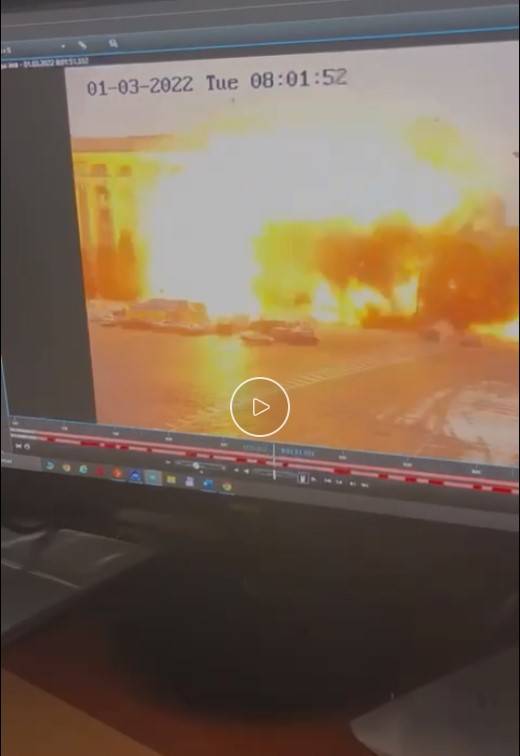 It is the MLRS projectile that flies along a pronounced ballistic trajectory. In our case, since they were shooting from a short distance, the barrels were raised as much as possible during launch, which ensured such a steep angle of incidence. The plant was nearby. A cruise missile flies differently.

Here is a map of Kharkov, which was maximally oriented to the cardinal points. If you look at how the projectile fell, you can conclude that it came from the north. But we are not there. For now, but no! 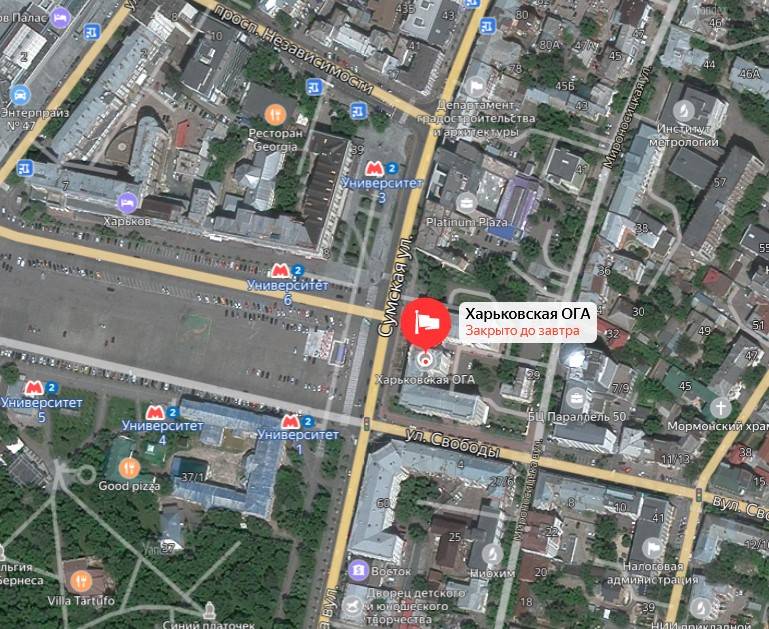 And among other things: ours do not shoot at urban areas, no matter how it is attributed. Moreover, if they fired, then for such a target as the Azov regiment, they would certainly be generous with a volley. And here - one rocket, more precisely, one projectile.

Total: a well-posed, but unfinished provocation.

4. Equipment abandoned by the invaders in Chemodanovka 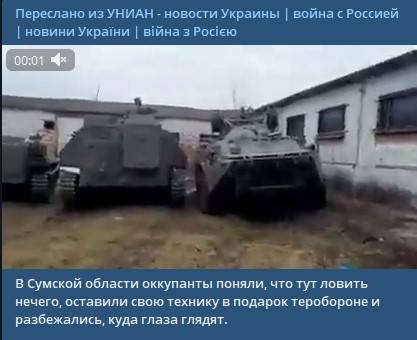 Chemodanovka, Sumy region. The “occupiers” abandoned their equipment and fled. Very joyfully, UNIAN screamed about this and others followed them. And for some reason, no one pays attention to some understaffing of equipment, quite evenly placed in the backyards of some warehouses.

The fact that all this rubbish was removed from the facilities of the RF Armed Forces a long time ago, and you rarely see such fossils in the Armed Forces of Ukraine, suggests that most likely all this stuff belongs to the National Guard of Ukraine. So what about the "occupiers" - this is too much. In addition, there are clearly no signs inherent in our equipment participating in the special operation. 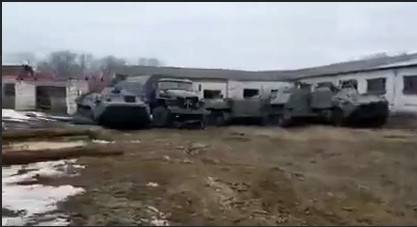 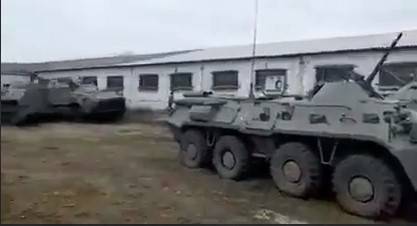 Well, it was very simple for the shooter to want this neatly standing rubbish to be Russian technology. He may have been, but Soviet and so 40 years ago.

Total: that's how there is a fake. I really wanted to wishful thinking.

5. Russian military convoy (they write - another one!), Defeated in the town of Trostyanets, Sumy region 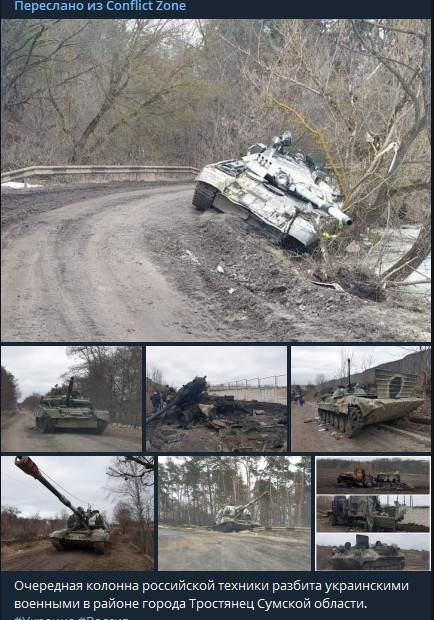 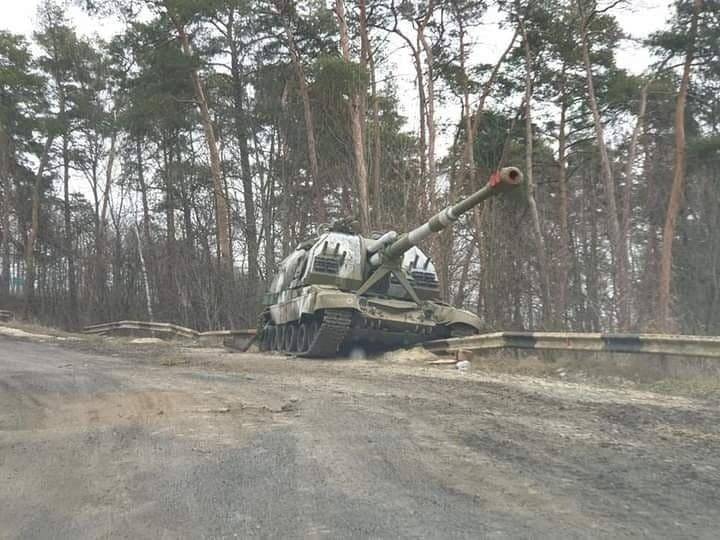 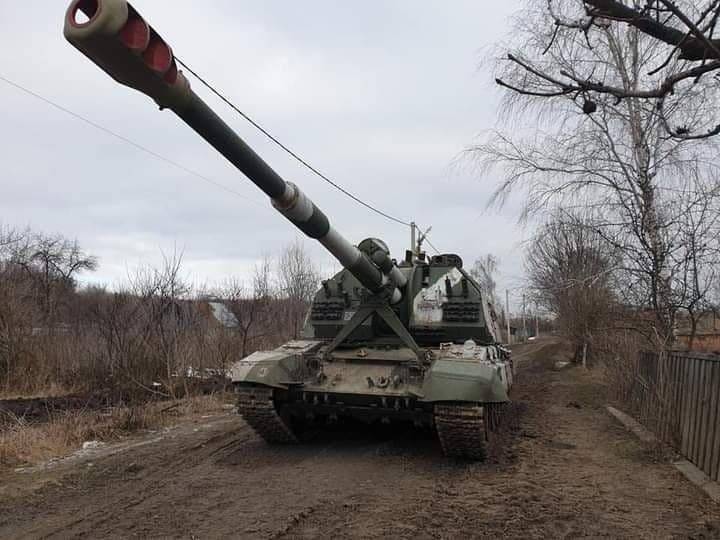 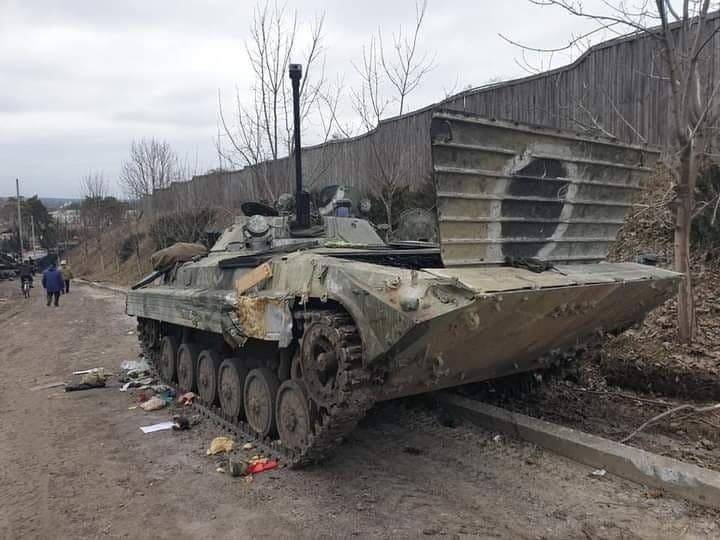 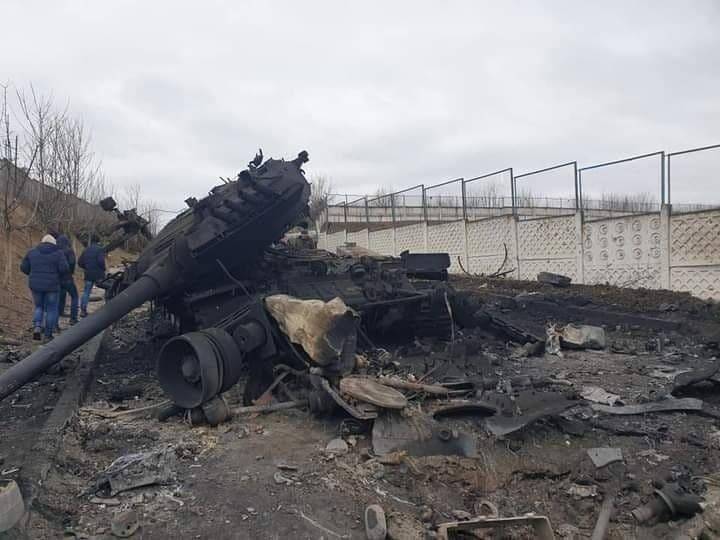 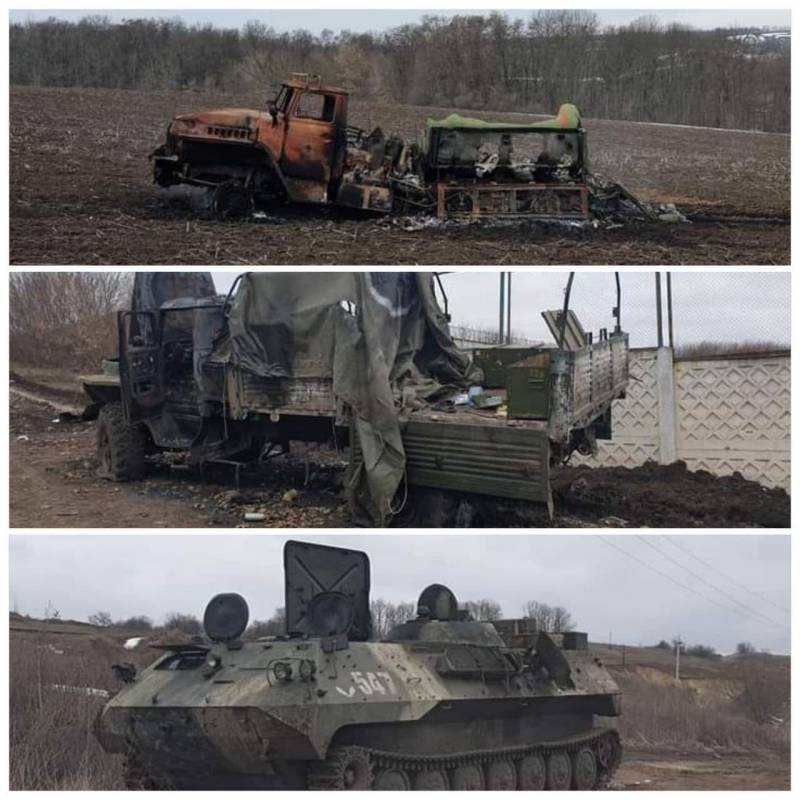 As I understand it, it is also from that opera when, with complete evil, a victory is needed. At least some. It is obvious that the city of Trostyanets is half the size of Ukraine, since the photos of the destroyed trucks date back to the war in the Donbass.

It is worth paying attention to the fact that there are no identification marks of the Russian contingent on all the equipment. They just pulled pictures from the Internet and passed them off as a win.

Moreover, officially the Armed Forces of Ukraine are also Tanks T-72, and Msta-S howitzers. All this was inherited from the division of the inheritance of the USSR in the 90s.

Outcome: a poorly made win. 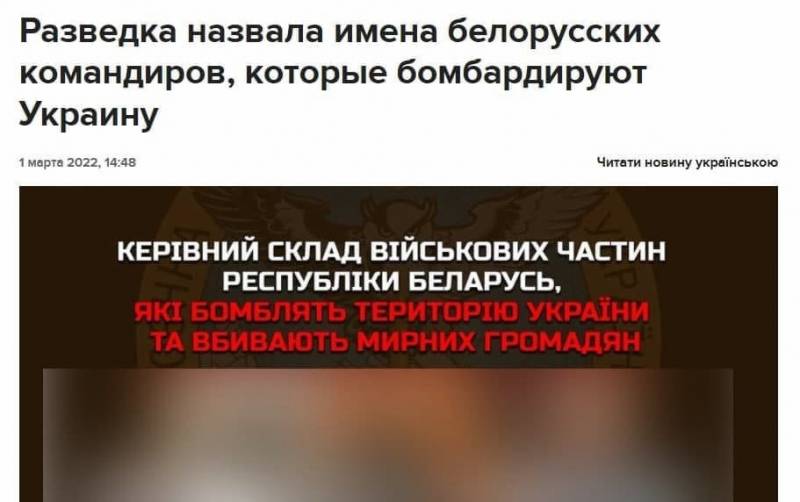 As evidence, a list of pilots participating in raids on Ukraine was cited. Ukrainian intelligence - it is so ...

But there is a small problem that brought to naught all the efforts of the heroes-scouts of Ukraine. And they turned out to be complete crap, since the list includes pilots Alexander Marfitsky and Alexander Zhuravlevich, who died back in 2009. 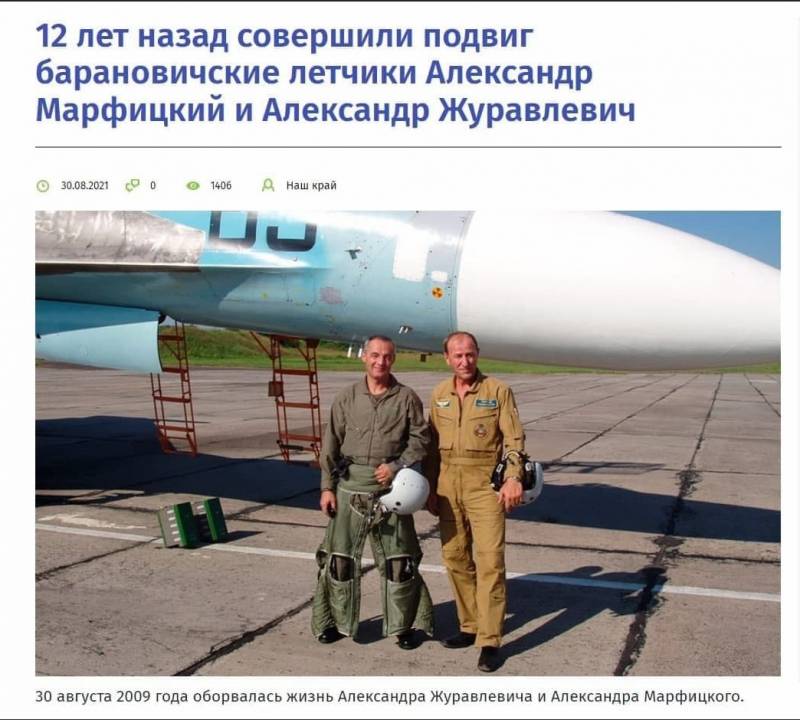 During the air show in the city of Radom (Poland), their Su-27, on which the pilots performed aerobatics, experienced a system failure. And without resorting to catapults, the Belarusian pilots took the plane away from the residential area, falling just a few hundred meters from the houses. 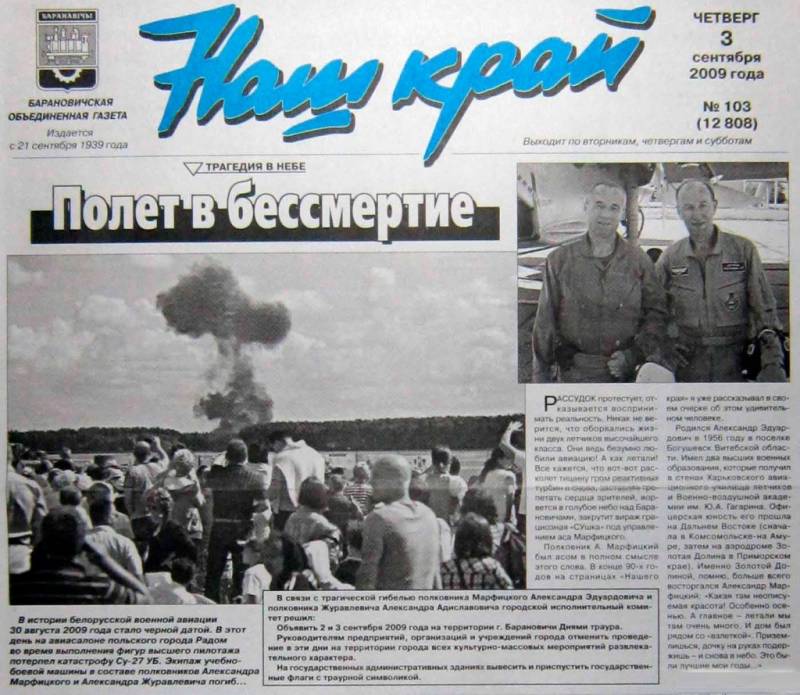 Rubbish intelligence is something in Ukraine ...

7. Poland and Bulgaria will supply combat aircraft to Ukraine 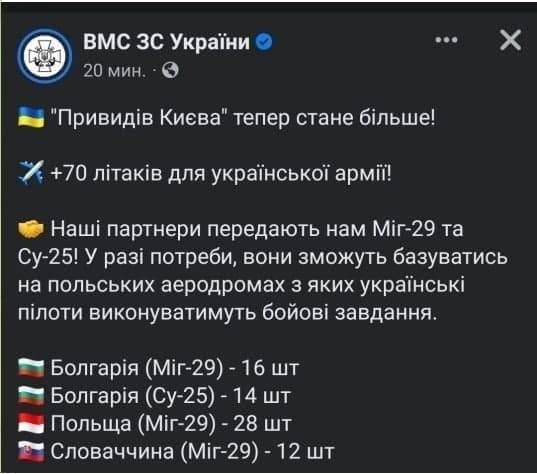 Here is a win so win! For some reason, the Ukrainian Navy was the first to write about it on its official website, but since fleet no more, yes, the former sailors need to be occupied with something. Otherwise, they may start to think, and this does not lead to good.

Now the entry has been deleted, but the Internet remembers everything. Plus, some of them added that the Ukrainian pilots would operate from Polish airfields, which definitely would not be used by Russian missiles.

Everyone was stunned. On the Russian side, this message aroused thoughtfulness, since, indeed, they would have to somehow intercept the Ukrainian Air Force aircraft and shoot them down.

But most of all, the people involved in this statement were stunned.

The first to rush into battle was Bulgarian Prime Minister Kirill Petkov. The head of the Cabinet was puzzled by the presence of such a number of operational aircraft in the country and hastened to dispel this myth:
“Sofia will not help Ukraine with fighter jets. There were no commitments regarding Bulgarian fighters. At present, we have few flying aircraft, and we cannot transfer them to another country.”

Clearly there was panic. In principle, for more than cooling relations with the “brothers”, it is enough that the leadership of Bulgaria has already done it. And military assistance, and even in such volumes ...

The Poles sorted it out a little longer, but President Duda himself made a refutation:
“We are not sending our planes, as this would mean military intervention in the conflict that is being waged in Ukraine, and thereby the inclusion of NATO in this conflict. NATO is not a party to this conflict. Our planes will not fly to Ukraine.”

Alas, there will be no planes.

It is clear that I really want to show that "everything is going according to plan", but ...

However, the final moment will come when it suddenly turns out that this very Mordor with the orcs turned out to be the winner. And all the pure elves of Ukraine will have a question: how so? We beat the enemy on all fronts, the whole of Europe was with us, everyone supported us - why?

Lies cannot always be defeated. Yes, you can fool the head of the enemy, using disinformation, as weapon. But the main thing here is not to get carried away. Otherwise, "The promised tomorrow will be bitter and intoxicated," as Vladimir Semenovich Vysotsky sang.