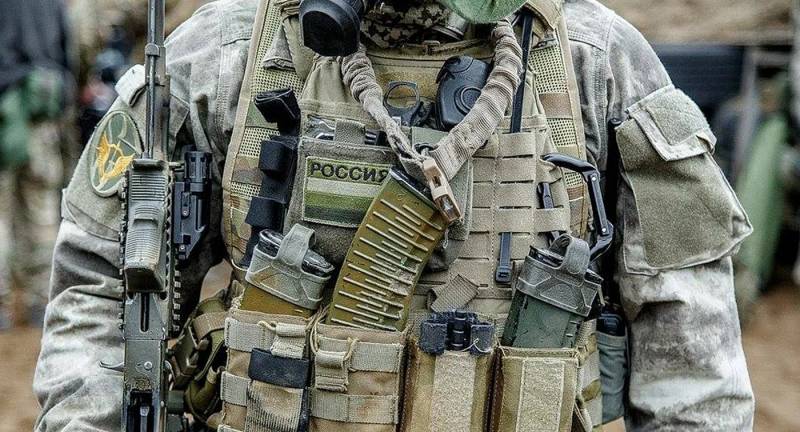 “The heroic traditions of special forces were laid down in the centuries-old stories our army. They were tempered during the years of the Great Patriotic War and continued, strengthened in Afghanistan, in many hot spots, in the course of the liquidation of terrorist gangs in the North Caucasus and Syria.

Russian President Vladimir Putin said these words in a video message to the soldiers and officers of the Special Operations Forces, who celebrated their professional holiday on February 27.

As often happens in SOF units, only some of the fighters were able to celebrate this date at home, among friends and relatives. Most of them were on business trips.

This time on the territory of the republic that was once close to us. They are doing their job again. Just because only they can do it... Do the job or... die. That is how often the question is asked. And that's really how they work.

Fighters who own almost everything weapons, which is in service with the armies of the world, with the highest level of tactical and special training. The MTR is armed with not only rare, but even unique pieces of weapons and equipment. And about how these fighters train, there are legends even among our opponents.

I confess, I really wanted to publish a congratulation on the holiday of February 27th. But a special operation in Ukraine got in the way. It got in the way that the guys were performing extremely difficult tasks to neutralize the Armed Forces of Ukraine. There was no time for congratulations and holidays.

Now the situation has cleared up. The confusion and some gouging of the first days have passed. The operation has acquired a familiar character, when everyone knows what to do in any situation. Consequently, there will be less stupid losses and unnecessary gestures.

“I want to thank the command, the personnel of the special operations forces, the veterans of the special forces units for their loyalty to the oath, for their impeccable service - in the name of the people of Russia and our great Motherland.
Special gratitude to those who these days are heroically fulfilling their military duty in the course of a special operation to provide assistance to the people's republics of Donbass."
This is again a quote from the president's address. In one sentence, why our missiles fly so accurately at the target, why the planes “hit a pretty penny, why the commanders of the Armed Forces of Ukraine began to die more often, where our soldiers are so well oriented in the location of the minefields of the Ukrainian army and so on, so on, so on.

Many of the readers still face one small problem. A friend served in special forces or intelligence. But, when you congratulate him on the corresponding all-Russian holiday, it suddenly turns out that this is not his holiday.

Exactly the same situation was in the Armed Forces of the Russian Federation. There were special forces units not only in various districts and formations. For example, in the Airborne Forces.

The structure that existed in the Soviet Union - the GRU special forces units, was largely lost. Therefore, it became necessary to create special-purpose units with a wide range of tasks that would be directly subordinate to the General Staff of the Armed Forces of the Russian Federation.

She did not appear out of nowhere. I think it's enough to name the year, and everyone will understand everything - 2008. It was then that the selection of the most trained soldiers and officers for the new structure began.

First of all, those who already had combat experience and showed themselves to be a good fighter were selected. Units were formed and engaged in combat training. Particular attention was paid, as before, to the coordination of groups and subunits.

The first mention of the existence of special units was in 2010. Then in November, the Deputy Commander of the Airborne Forces spoke about these new units.

For the first time, the President of Russia and the command of the Armed Forces of the Russian Federation openly stated that the MTRs are created mainly for operations abroad. For confidential transactions. Hence the divisions of combat swimmers, and anti-terror specialists abroad and in the Caucasus, intelligence officers of various specialties and other specialists.

In April, during an exercise in Kabardino-Balkaria, we were surprised to see scouts on ATVs who landed from a height of 6,5 kilometers ...

And then began a short but very glorious biography of our MTRs. Polite people - for some, and green men - for others, in the Crimea. Working behind the lines of militants in Syria. Heroism, which is already legendary. I talked about the exploits of intelligence officers from Syria in my materials. Now Ukraine...

MTR fighters are not only soldiers. They are very well trained scouts who have been trained in different countries, in a variety of conditions and are well aware of the specifics of different states.

In addition, such groups are equipped, as I wrote above, with everything necessary to complete any task, regardless of the place where the task is performed.

MTR is really the elite of our Armed Forces. These are units that are always ready for battle. May luck smile upon you guys!