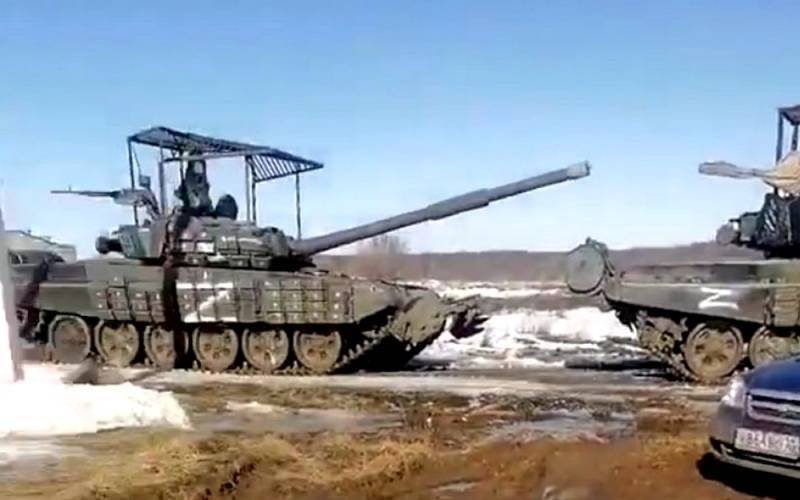 At the end of December 2021, an article was published on Military Review "Umbrella for the tank and" roof-breakers ", where a certain assessment was given to the "revolutionary innovation" of protection tank from modern, "fashionable" means of destroying tanks from ammunition that affects the upper sphere of armored vehicles.

As they looked into the water ....

And we have no joy in our such “correct prediction”. Anxiety and a heavy sigh ....

It was quite difficult for me then (and still) to write them because of the consequences of concussions, already annoyed at this to the point of gritting my teeth. About 7-10 unfinished articles accumulated on the laptop, but ... purely intuitively, then I put them aside and designed the material about these "visors".

1. Because a thunderstorm was then in the air, everyone felt it.
2. Because roofers have become a real threat to tanks, which are the main striking force of the ground forces.
3. Because it was necessary to neutralize this threat in the first place.
4. Because it was possible to create such protection in the shortest possible time and without any serious financial investments.
It was the fourth point that became decisive, why I put aside all the materials and formalized not only my vision, but also the vision of my colleagues to create the maximum possible protection for tanks from being hit in the weakly protected upper hemisphere: MTO and the upper part of the tower.

But the troops entered Ukraine with these, damn it .... visor options.
During the special operation in Ukraine, numerous photos and videos appeared showing the massive use of this type of protection on tanks of the RF Armed Forces.

It was immediately noticeable that there was no single design standard, as such.
The article analyzed in detail two options, initial and final. Both constructions and somewhat different "umbrellas" flash in the media. 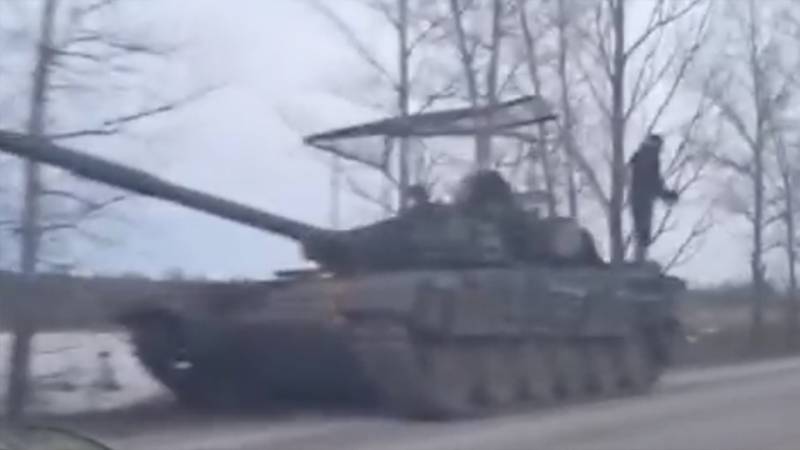 Subsequent options will be further in the material.

Yes, as it was said in the article, the main shield of the tank is the comprehensive protection of the entire unit, this is absolutely true. And we all see this in the events in Ukraine, when the types and types of troops work in a single mode of combined arms combat.

But the "last line of defense" should be. And it must be effective.

An attentive reader should have noticed that we focused our attention not only on the "fashionable" then theme of "Bayraktar", but on ALL (!!!) roof-breakers, where there is a "Javellin", and SPBE MLRS, and the WTO in the form of "Excalibur ", "Fireball", "Merlin", "Locaas".

Bayraktars and other strike drones require the use of vulnerable infrastructure and are quite expensive. But with "Java" a fighter can sit quietly on the edge and ... And a mortar with average training will quickly figure out how to deal with the same "Merlin" ...

It seems the West has already expressed a desire to get rid of some of its old weapons?
It is not joyful from the sale of predictions ...

And photos of the affected tanks, protected by "umbrellas", appeared on the screens ... 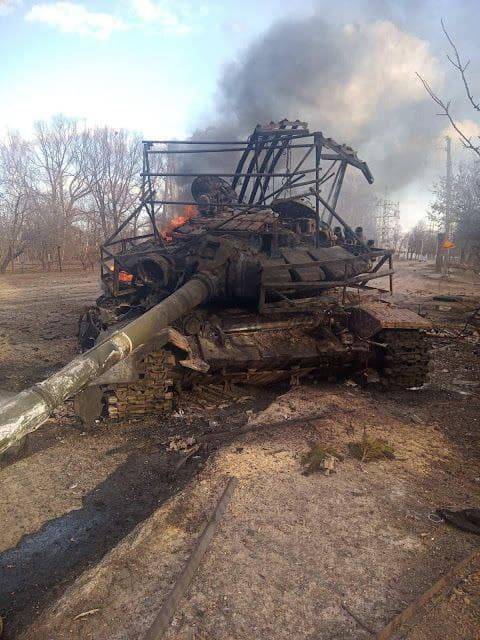 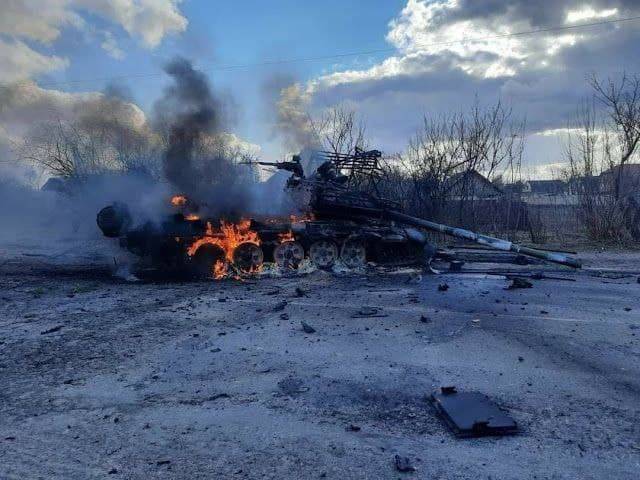 Rare car. One of the T-72BA variants.

I will not hide the fact that a lot of calls and messages came in PM and on the phone, where everyone echoed the same thing:
- Lech, you were right, these visors are complete bullshit!!!

But ... with all my categorical rejection of this type of protection, I would not say so. And this is not what my colleagues and I wrote about in the article. Yes, and there is no clear clarity that hit the "roof", and not something else.

I will justify why I will not call it "bullshit", although I have already expressed my whole attitude towards them:

The lattice, which is one of the methods of mechanical passive protection, only reduces the likelihood of hitting armored vehicles.
Strips of metal can cut the ammunition or break the electrical contact of the first generation grenades using shock or shock-inertial fuses. It is the technical data of the structure itself that are important here - the thickness and width of the metal strips, as well as the distance between them.

And modern highly sensitive inertial fuses can start the process of forming a cumulative jet BEFORE meeting the grate. And here the distance of the grating from the armor itself is important, taking into account the focal length of the shaped charge itself. Also, do not forget that most high-precision cumulative ammunition is TANDEM.

Conclusion from what has been said?
You need TWO lines of defense.

I will also call them “journalistic syndrome”.
Somehow he gave a collective example of how this “brotherhood” worked in the Caucasus and why, ahem, they were not always ... loved.

They attacked a tank company, firing at all 10 vehicles with 2-5 RPG shots. Six cars - at least henna. Four - smoked. Crews with mats jumped out. Two of the four cars took off on the detonation of the BC, two stopped smoking and were started up.

The journalists galloped up and began to shoot with a squeak and a screech exactly TWO cars blown to shreds. Eight (!) surviving (!!!) cars are not interesting to them, they do not remove them.
- Guys, don't hit us! We need “fried” material for the editorial! Readers are not interested in WHOLE cars!!!

Do you think something has changed? No.

And if somewhere a debilitating "umbrella-visor" by chance or probability theory saved a tank from a direct hit by "Java" on the roof of the tower - NOBODY will know about it now, NOBODY will write about it, because ... it's not interesting.
It is now possible to find out about this only by chance.

Here, for example, look at the photo, where, by the way, there is a different kind of visor. 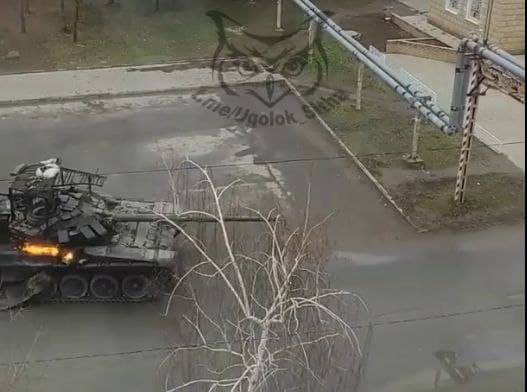 But the main thing here is the absence of a DZ block and there is a video where this car is on fire, but continues to move in a column. That is, the tank was clearly attacked by the PTS, but remained intact. But who cares?
No one.

Lattice screens, whatever one may say, reduce the likelihood of hitting armored vehicles. And in our material, we honestly wrote that if there was a chance that the enemy would use "roof-breakers", we would also go to the database with this damn visor.
Well, since there is NOTHING else, if the Ministry of Defense has not decided to put DZ towers from tandem design bureaus on the Roof.

Even taking into account all those negative and frankly harmful disadvantages of these grids, which were honestly painted in the last article.
So what to do?

Fight for your life

How to increase the protection of lattice data?
We recall point 1 "Physical principles" and do everything to WORSE the comfort of the shaped charge, REDUCING the likelihood of a high-quality work of the cumulative funnel.

And… We begin to act.

At first:
It is possible to weld additional DZ blocks onto the roof of the tower - you need to weld them. It doesn't matter which, Contact-1,5 or 525.
No blocks? There is no "fly" with welding? Throw all sorts of crap on the tower - the same boxes from under the cartridges, and hammer the empty zinc in them with stones. This will be the last line for the "tandem".

Photo to you from Khankala 1996. with Zhilin. 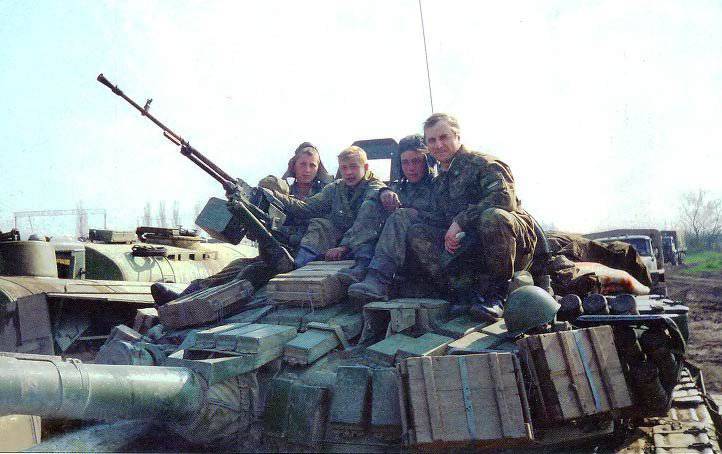 We throw bags on top of the grate, clogging them with everything that can prevent the charge from CORRECTLY forming a cumulative jet - yes, even with a broken brick, so as not to overload the structure. DZ on top of the grill? Do not be self-willed, talk to the deputy chief and do as he says.

This will be the first frontier for the meeting of the "tandem".

It remains to pray that the focal length of the ammunition and the distance of the grating to the roof of the tower enter the "resonance" of efficiency weapons lesions.

Look at this photo. By the way, there is one of the best lattice options. 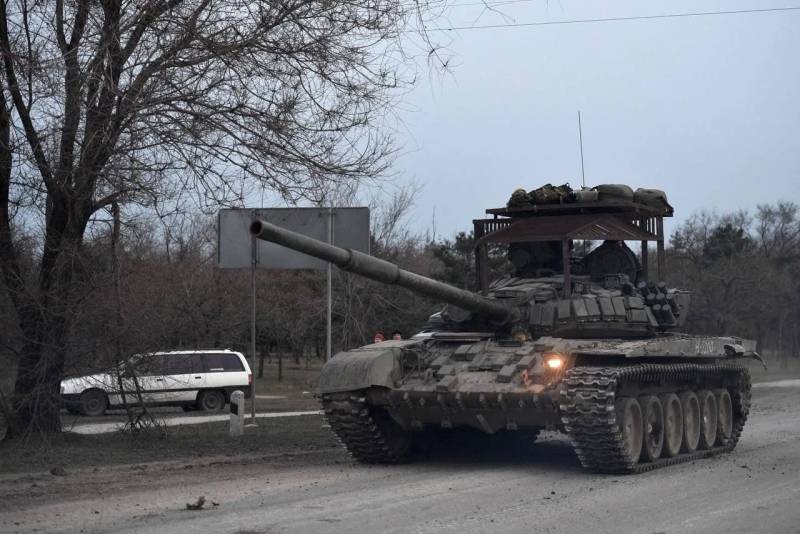 The car is quite old. This is T-72B1. That is, the T-72B even without the KUV (guided weapon system).
Without a thermal imager.
No normal connection.
With the old RMSh and the type of links of the psaltery and so on.
And she has already been in alteration, the side screen has been torn off, the remote sensing on the VLD has been partially torn off.
But on the "umbrella" are the necessary, almost correct gifts.

Look at their faces. From the point of view of a mechanic and a gunner.
They are very Familiar. Not faces, I meant expressions. I think, and I really hope that everything will be fine with them ...

Now there is no point in screaming and talking about how bad everything is. No time. It is necessary to use the MAXIMUM of standard, non-standard and any other available means for additional protection of tanks from being hit in the upper part of the tower. At least the towers, because there is a crew. For now, let's forget about the protection of the MTO. Not the time for that.

There is a wise old saying:
In war you can't talk bad about your soldiers. They need to be supported even if they are wrong.

Some of the rules of survival in the T-72:

- Boxes with DZ are all in place and stuffed.
- Ammunition only in the AZ conveyor. Only in AZ.
- Fuel only in internal tanks. Only in internal. This is 705 liters.
- Hatches, if possible, ajar. That is, they “clap”, “hang out” on springs for possible evacuation. But not with the threat of "roof-breakers".
- Do not forget that when the FCS is turned on, the gyroscope spins up for 2-2,5 minutes. This means that in case of a possible potential danger (for example, on the march ahead, according to the map, buildings near the highway), the mechanics switch to the “Combat” position, the gunner turn on the “Drive” toggle switch and “Cheburashka” manually correct the turret GN.
- The AZ conveyor must already be ROLLED onto empty cassettes. That is, when you press the AZ, the cassette should rise to the loading angle INSTANTLY, without scrolling the conveyor.
- All shots must be stacked consecutively WITHOUT gaps.
- At the feet of the gunner and the commander should be empty for physical communication with the mechanic.
- The commander sticks out to the hatch.

I understand that this is not always possible.
I understand that the guys are simultaneously marching and can immediately join the battle.
Therefore, the PSUs are loaded to the eyeballs and the fuel is filled to the maximum, including barrels.
I see.
But if possible, it is better to listen to experience.
And remember that laziness is one of the main enemies when maintaining a database.