Westley Richards vs Martini-Henry. Weapons of the First Boer War, 1880-1881 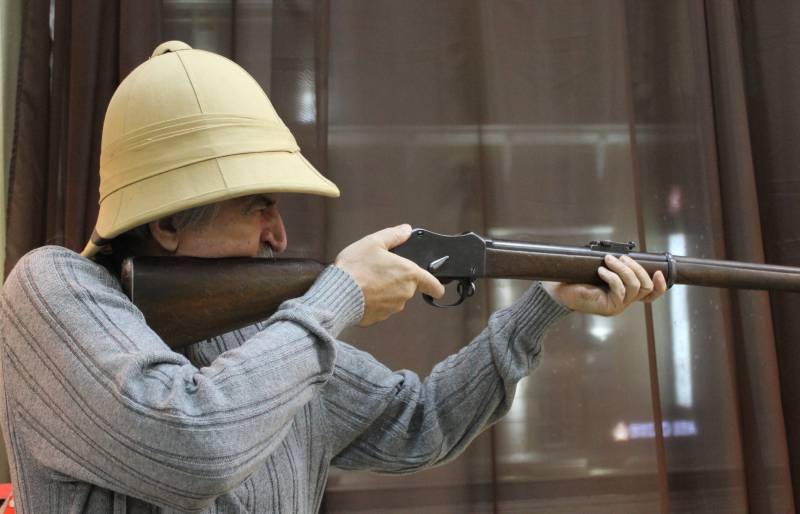 The author with a Martini-Henry rifle, model 1871, in a pith helmet from the times of Isandlwana and the First Boer War. Personal impressions: comfortable to hold, not heavy, nothing more, recharges easily and quickly. Here to shoot, unfortunately, it was not possible to shoot from it

“Paul Potter was loading his gun. The work is not quick: it is necessary to fill the gunpowder into the muzzle, lower a bullet wrapped in a fat-soaked wad with the help of a ramrod, then put a copper piston on the priming rod ... This procedure took a good half a minute, while the Mausers managed to make a dozen shots in the same time. But the young drill valued not so much the quantity as the quality of the shots.
"Captain Rip-Head". L. Bussenard
Unknown Wars. Before we go further in our acquaintance with the First Boer War, we should dwell on such an important aspect of it as the armament of the warring parties. And first of all, we will talk about that mass, that is, small arms weaponswho fought in Africa, the Boers and the British. We note right away that the rifles used by both sides were very similar both in terms of the place of production, and in terms of caliber, weight and ammunition used. The British fought with the Martini-Henry rifle, but the Boers mainly used Westley Richards rifles with a "falling bolt" and also breech-loading.

"Martini-Henry" model 1895. Produced by August Francott for the company "Westley Richards" for deliveries to the Republic of South Africa. Royal Arsenal, Leeds
And since this is the case, it becomes obvious that the victory of the Boers in this war was largely due to their skill with their rifles and excellent tactics in using them on the battlefield. 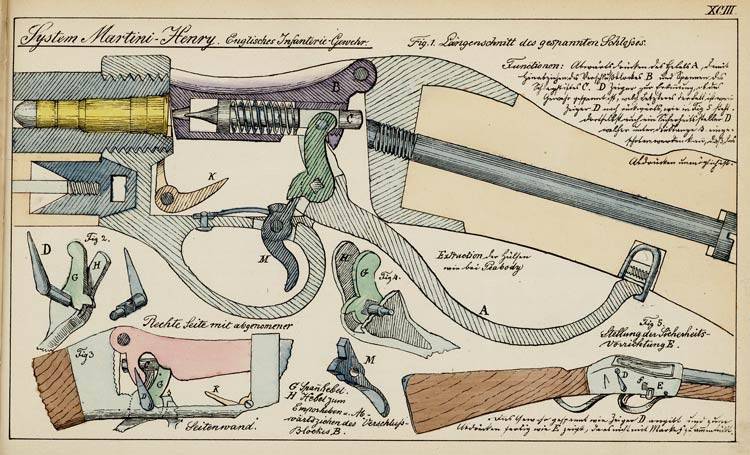 Scheme of the device of the mechanism of the rifle "Martini-Henry"
Let's start with the fact that in Cape Town, from the first days of white settlement in South Africa, there was a law that provided that every man between the ages of 16 and 60 had to have a horse, saddle, bridle, musket, 30 lead bullets and 30 charges of black powder, as well as a three-day ration, and with all this to be "where necessary" on demand. That is, be ready for military service at any time. 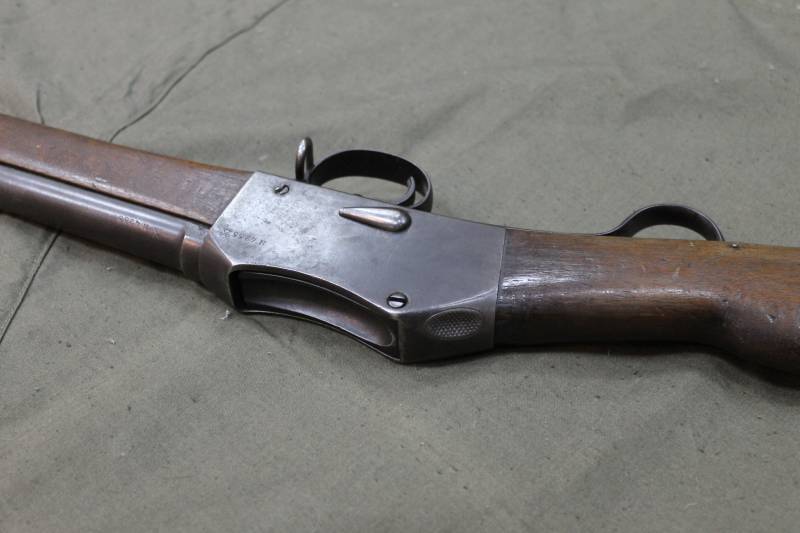 An oval "medallion" with a thread - under the thumb, so as not to slip when placed on the receiver. The drop-shaped "lever" on the right side is not a fuse, but an indicator of the firing pin cocking. Straight up (12 o'clock) - not cocked, back (at 7-9 o'clock) - the firing pin is cocked. Author's photo
The Boers learned to shoot from an early age. They were avid hunters, there was a lot of game, and they set off daily for prey. Therefore, they could always protect their isolated homesteads from marauding black natives. Competitions were held from time to time, which further improved their already accurate shooting, so that in the end all Boers became excellent marksmen. 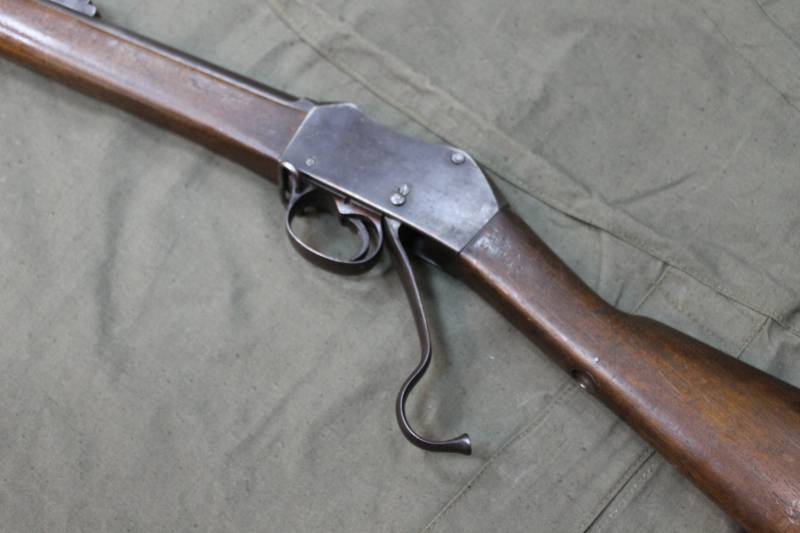 The lever that lowered the shutter when reloading. Author's photo
On the other hand, the British soldier was never a good shooter, he was trained to shoot in volleys. Thus, there is no doubt that any slight advantage that the British could gain from their .450-inch Mk III Martin-Henry breech-loading rifle could easily be offset by the accuracy of the Boers. 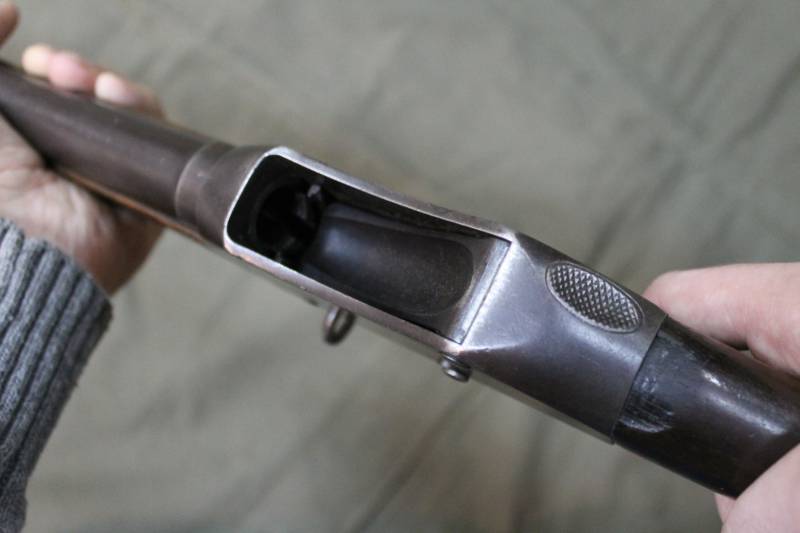 "Martini-Henry" - the shutter is open. Author's photo
So, the standard weapon of the British infantry of that time was a breech-loading rifle, caliber .450 Martini-Henry Mk III.

Frame from the movie "Zulu" (1964). This is how the cartridge should have been loaded into it ...
The Martini-Henry rifle fired .577 / .450 cartridges, which in 1881 had brass cases, a central ignition primer and 31,1 g lead bullets with paper wrap. Load: 85 grains of black powder for a rifle and 55 grains for a carbine. To reduce recoil when firing carbines, a lighter bullet was developed for them. The cartridges differed in the color of the paper wrapper - white for a rifle and red for cartridges for a carbine. Although it was possible to shoot from a rifle and a carbine with cartridges of both types. 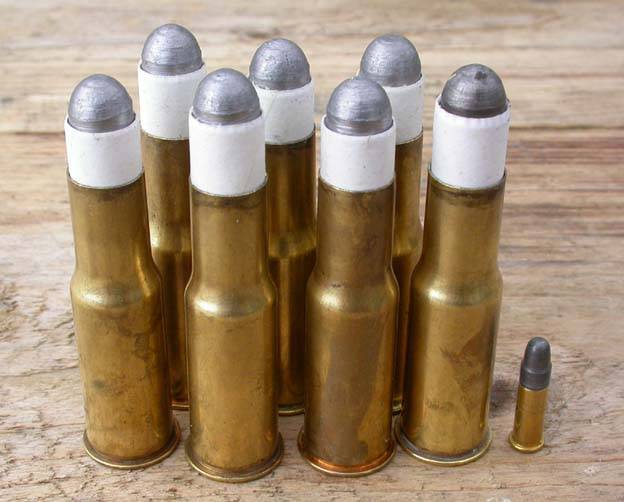 Martini-Henry cartridges obtained by compression of a straight case from a .577 Snyder rifle 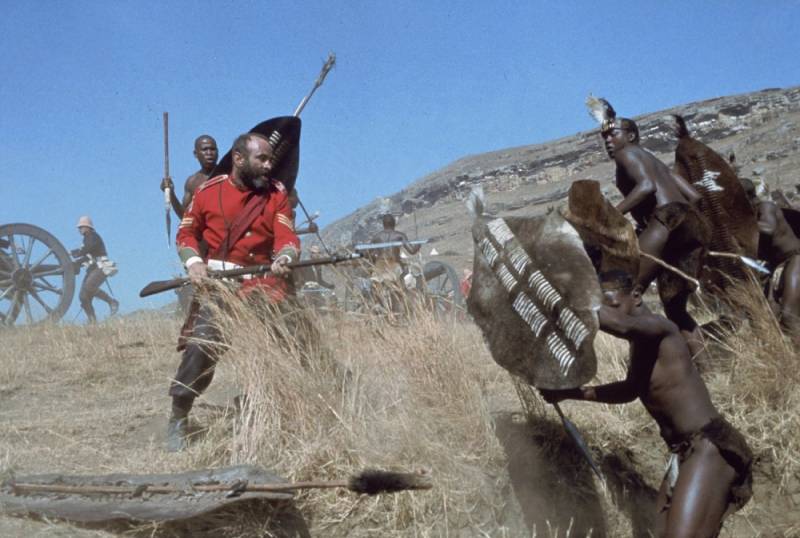 This is how the British fought with these rifles with bayonets. Shot from the film "Dawn of the Zulu (1979)
The cavalry and artillery units of that time were armed with the Martini-Henry carbine, which was shorter and lighter than a rifle. However, the cavalry as such did not participate in the three battles of Laingsneck, Schuinschogt and Majub in January and February 1881, although among the horsemen who participated in the battles of Laingsneck and Schuinschogt were the cavalrymen of the Royal Dragoon Guards, who were supposed to have this carbine. The rest of the mounted units, consisting mainly of soldiers from the 58th Yeomanry and 60th Rifles, are shown in most photographs with a standard infantry rifle. 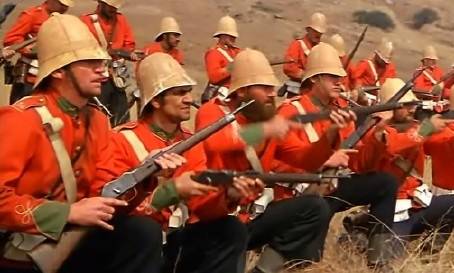 Still from the film Zulu Dawn (1979). In the hands of soldiers carbines "Martini-Henry"
The officers probably also had 45-inch double-action Webley revolvers chambered for centerfire, although some officers may still have had the Adams revolvers with which they were armed earlier. 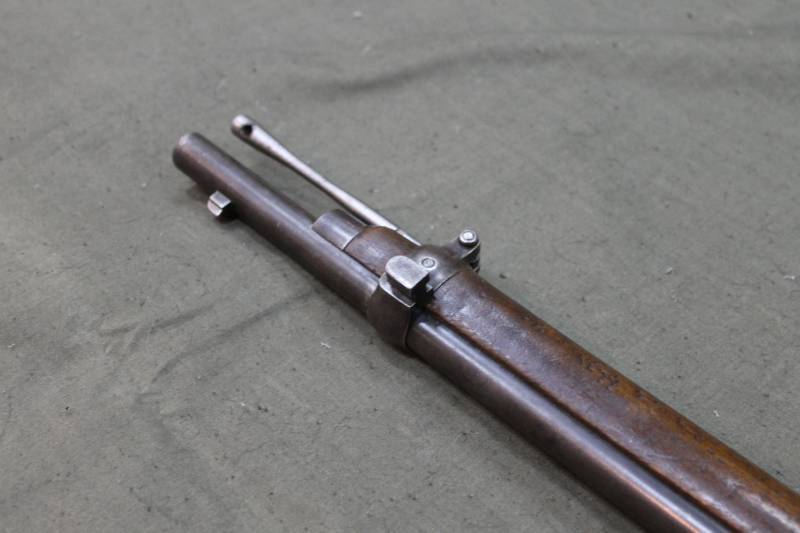 The muzzle of the barrel, the ramrod and the fastening of the bayonet of the Martini-Henry rifle. Author's photo
The rival of the Martini-Henry rifle on the battlefields of the First Anglo-Boer War was, oddly enough, also an English rifle, and also released in 1871 by Westley Richards, which produced first-class weapons for hunting. Expensive, yes, only the Boer farmer, who needed firearms for hunting and protecting his estate, bought the best weapons he could afford and which at that time were available at his place of residence. That is why Westley Richards actively sold its weapons to South Africa. It's true, she's not the only one... 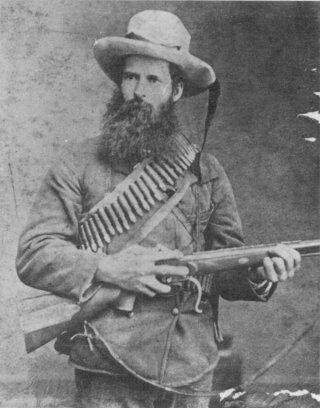 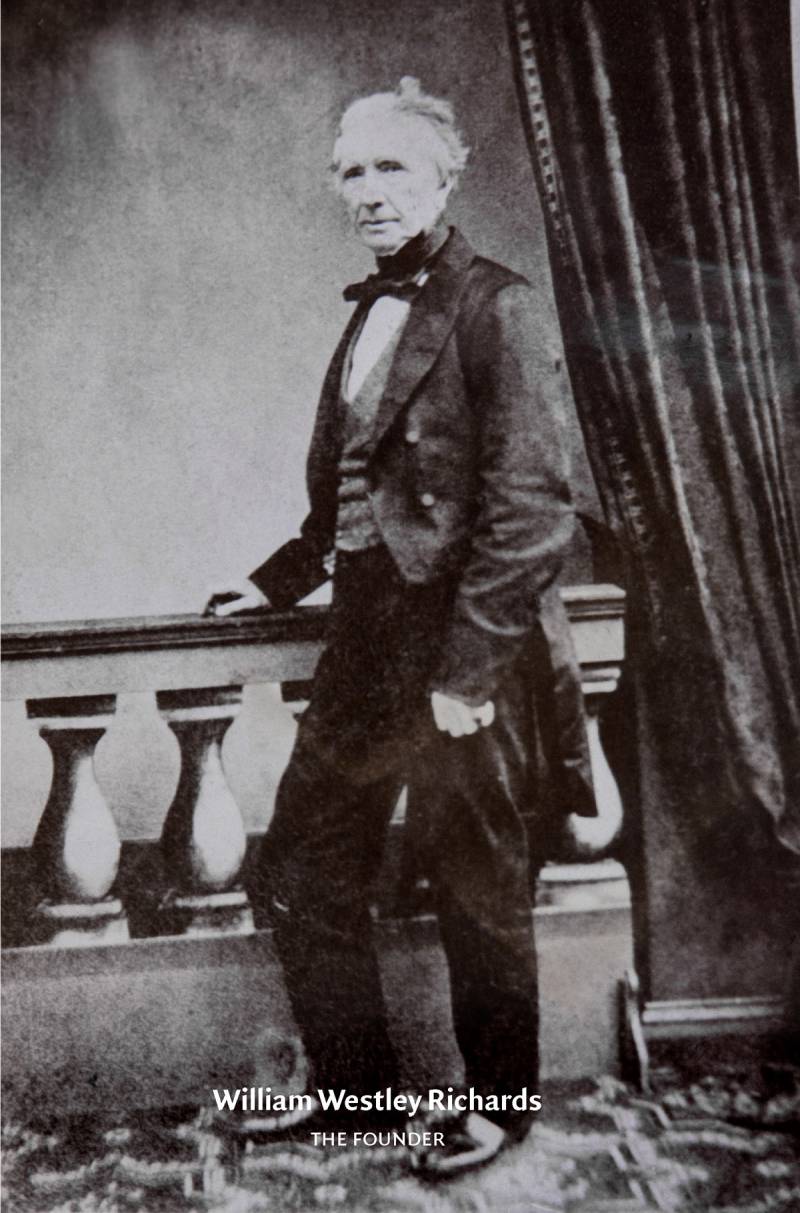 William Westley Richards - company founder
As for the Westley Richards rifles, their история started back in 1812, when William Westley Richards (he was then 22 years old!) founded the company that bears his name and continues to thrive to this day. For more than 200 years of continuous production of weapons, the company has written many important pages in its history: first of all, we should mention the seamless brass cartridge case, the drop-action rifle, the Anson & Delay hammerless shotgun, and a number of other developments. The firm holds 115 patents and has received at least 22 special awards and medals. And today, the hunting rifles of this company are mainly made on the basis of patents of that time, although so many years have passed. No wonder the company's slogan is the phrase:British means better!».

Westley Richards .450 Cavalry Carbine, 1865 British Library, London
Interestingly, the Westley Richards system appeared before the Martini-Henry system, and did not at all become its development, as it might seem at first glance.

Westley Richards (1871) at the top and Martini-Henry (1871) at the bottom. Royal Arsenal, Leeds
Boers did not use rifles with a bayonet. The officers also had rifles, and some had revolvers of various brands. But even in the critical period after the annexation of the Transvaal in 1877, the Boers did not create either a standing army or a real high command, that is, they had everything according to the principle: "as it went, so it wandered." 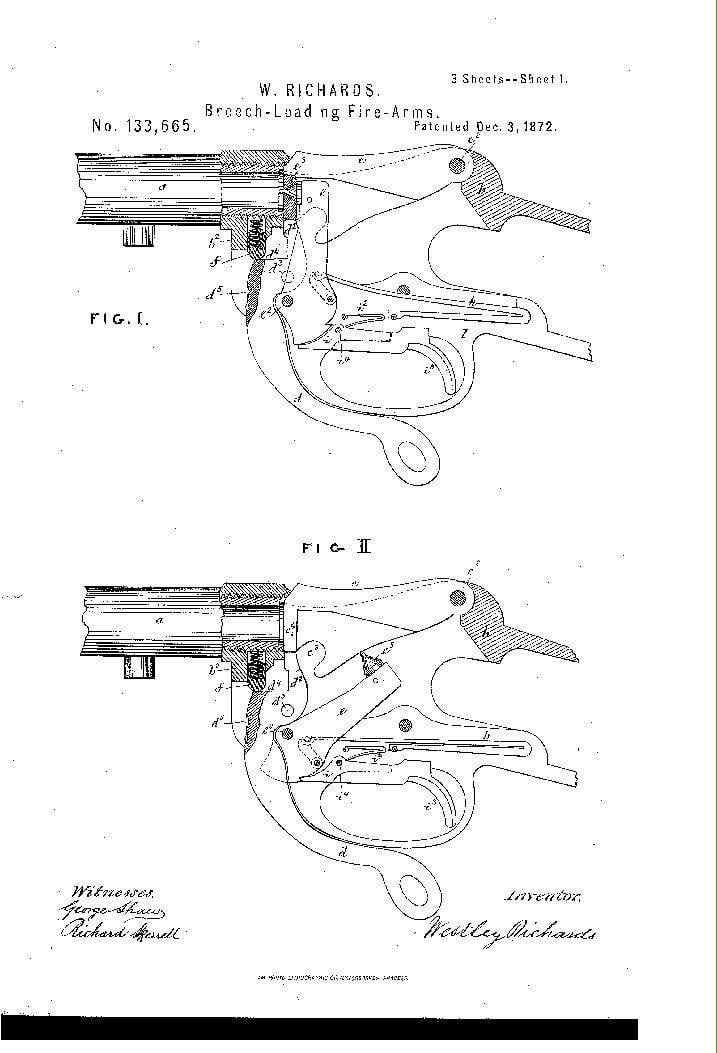 Diagram of the bolt action of the Westley Richards rifle from an 1872 patent.
The Boers are accustomed to fighting in mountainous terrain. They skillfully tried on the terrain, they could confidently hit the target, even while in the saddle. It was not so with the British, who did not know how to shoot from a horse at all, about which even R. Kipling wrote in his “Poem about the West and East”:

“He fired once, and fired two, and a bullet whistled at the bushes ... Shoot like a soldier,” Kamal said, “I'll see how you ride!” 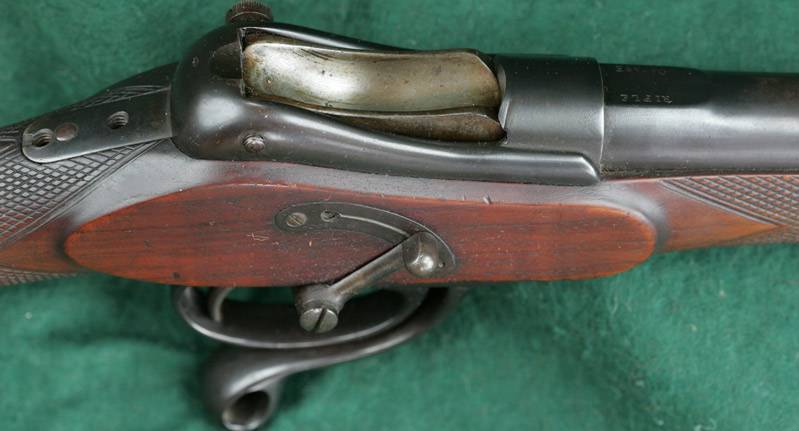 The shutter of the Westley Richards rifle, model 1868. Photo by Alain Daubresse website www.littlegun.be
The tactic used by the Boers at the Battle of Majub was to place the older and less mobile Boers, who were both more experienced and better marksmen, at the foot of the hill. They fired continuously and deadly on its crest, shooting at every British head that appeared there. The assault parties were composed of young men who moved up quickly and were hardly disturbed by the British fire from above. There was also flanking fire from two Boer assault groups, taking turns covering each other as they moved up, zigzagging from cover to cover.

The same rifle. View from the left. Photo by Alain Daubresse website www.littlegun.be
The height of Majuba is about 2000 feet (610 m), and this distance was easily covered by the Boers, because the Boers at the foot of the hill fired deadly fire at its top from their rifles, the effective range of which was 1000 yards (914 m).

"The use of very high quality Westley Richards breech-loading rifles made it extremely dangerous for the British to lean out over the crest of the hill."
An exhaustive search did not turn up a single photograph of a Majuba Boer carrying an old Westley Richards rifle with a monkey tail action. It is possible that they must have been used, but in most of the photographs we see an 1871 pattern rifle that used a No. 2 cartridge with a .450/.577 caliber bullet. 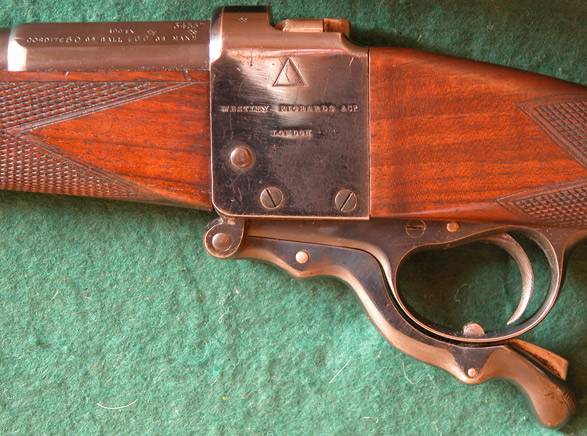 Receiver rifle "Westley Richards" 1897 This was the most advanced example of a weapon with a falling bolt. Unlike the long lever of the English Martini-Henry rifle, the lever of the Westley Richards rifle went around the trigger guard, that is, it was convenient to fold it forward, practically without tearing the butt from the shoulder. The total length was 1220 mm, the barrel length was 810 mm. Caliber .450. Photo by Alain Daubresse website www.littlegun.be 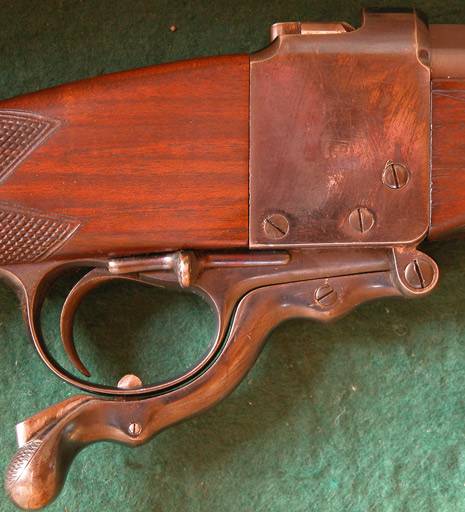 The same rifle, right side view. The striker cocking indicator, which was equipped with the 1871 model, is missing. Photo by Alain Daubresse website www.littlegun.be
Thus, the British did not have the advantage in firearms and firepower that many historians have talked about over the past hundred years. In fact, the Boers had another advantage: they were consummate masters in handling and shooting their weapons, and they fired and reloaded them at such a speed that the British were often misled into thinking by the rate of fire that there were three or three of them. four times more than it actually was ...