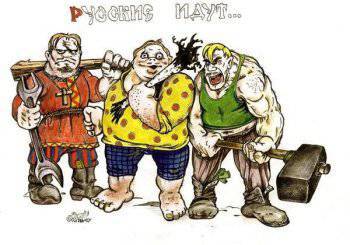 From the Editor: It is difficult to say how truthful is the information posted last night on several Internet resources. It may be the usual newspaper "duck", and the purest truth. In any case, it warms the soul of everyone who is familiar with the concepts of "fascism", "patriotism", "Motherland" ...

“The ambassador of the Russian Federation in Latvia was handed a note of protest in connection with the bold antics of the Russian special forces. The military incident that threatens to turn into the most ambitious international scandal for all the latest history our countries, happened tonight.

The reconnaissance and sabotage company of the 76 Guards Airborne Assault Division, stationed in the village of Cherekha, Pskov Region, made a foray into the territory of the Republic of Latvia, during which Russian special forces destroyed the monument to the Waffen SS punitive battalion in the town of Bauska.

The Russian Ministry of Defense has already refuted information that has appeared in a number of foreign media that the order for this attack was given personally by the commander of the Airborne Forces, Colonel-General Vladimir Shamanov. Reportedly, the responsibility for the special operation was assumed by the reconnaissance company commander, guard captain Nikolai Aryukov.

According to the spokesperson of the Ministry of Defense, the military unit worked out the conduct of autonomous combat operations in the rear of the enemy in the border area. It is reported that for this reason the radio silence mode was activated and there was no communication with the exercise headquarters. The company commander, having abused alcoholic beverages, arbitrarily gave the order to cross the border. As you know, in the army orders are not discussed, but executed. This order has also been executed. Having made a forced march, the Russian paratroopers dismantled the monument to the SS men with the help of a tackle tool and such-and-such mother. Looking ahead, we'd better say that they would do it in complete silence, but, apparently, the wine pair still made themselves felt.

It is noteworthy that it was never possible to detect eyewitnesses to the events of the Latvian police, as the Russian reconnaissance and sabotage group worked so jewelery. It is also still unclear how and where exactly the state border was crossed.

Most likely, the local anti-fascists would be blamed for the destruction of the monument if it were not for recording outdoor surveillance cameras, on which the equipment and weapons of those whom the Latvian side has already called “vandals” are clearly visible. Worst of all, the microphones built into the cameras allowed the police to listen to what they thought of the Latvian authorities, who set up monuments for the SS riders, Russian desantaurers.

Further identification has become a matter of time - after all, rarely in the center of Latvian cities is hosted by a group of two dozen servicemen armed with machine guns in Russian uniform, dismantling a monument.
The command of the exercise refrained from commenting for several hours, but after the Latvian side provided photos of spy satellites that were transmitted to it by the allies on the NATO bloc, they were forced to admit that the Russian Federation military had violated the state border.

It is known that at present the guard captain Aryukov is in the garrison guardhouse and investigators from the military prosecutor’s office and the Federal Security Service are working with him. A barracks situation was introduced in the garrison itself and it would be impossible to interview colleagues of the distinguished officer of the Airborne Forces in the near future.

A monument to the Latvian punishers from the 23, 319 and 322 battalions of the Waffen SS was installed on September 14 in the center of the Latvian city of Bauska. The inscription on the monument says that it was set up in honor of the city’s defenders against the second occupation by the Soviet Union, and that Latvia should be a Latvian state.
However, if the former thesis had been read by the former German masters of the Latvian legionnaires, they would have been surprised a lot - Germany and had no plans to give Latvia to Latvians.

The mayor of Bauska Valdis Vape, during an interview with Baltkom radio station, said that the idea of ​​installing the monument belonged to the former Latvian fighter "Waffen SS", defender of the city from Soviet troops Imants Zeltins. According to the mayor, the monument of the SS will be restored at the expense of the city treasury in the near future. ”