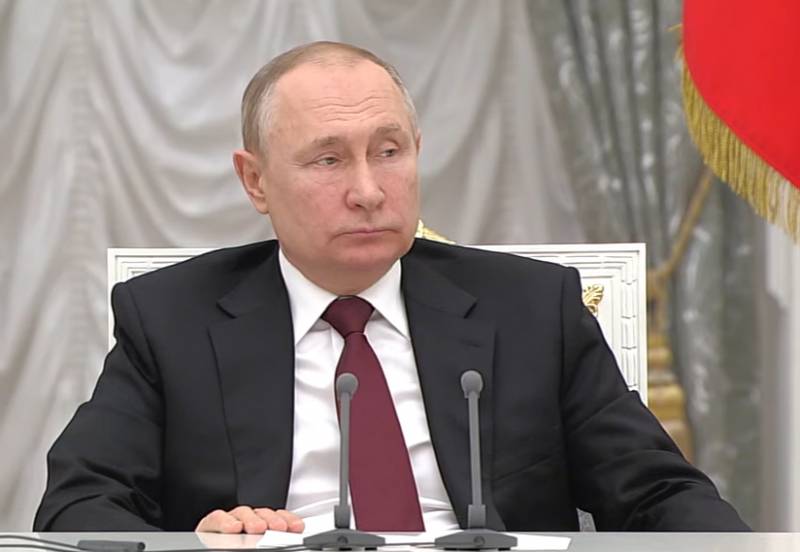 For the first time in recent years, an open meeting of the Russian Security Council is being held. In addition to the president of Russia, the director of the FSB, the minister of defense, the chief of the General Staff, the head of the Foreign Ministry, the chairmen of the upper and lower houses of parliament and other top federal officials take part in it.


A remarkable episode took place during the meeting. Russia's representative in the Trilateral Contact Group Dmitry Kozak, answering a question from Russian President Vladimir Putin about Ukraine's readiness to implement the Minsk agreements, replied that Kiev was not going to implement these agreements. And it is not going to fulfill them under any circumstances.

At the same time, Dmitry Kozak, at the end of his speech, offered to express his opinion on an important, as he himself noted, issue.

I would like to speak on the subject of joining the Donbass or not.
To join or not to join...

Vladimir Putin looked inquiringly at the official and asked a question:

Ну и что?
Kozak did not continue further. And President Putin suggested to Kozak that "we stop at this part of the speech for the time being."

During the meeting of the Security Council of the Russian Federation, Defense Minister Sergei Shoigu spoke. He pointed out that along the entire line of contact, the number of attacks by Ukrainian troops increased, approaching the intensity of the 2014-15 model. According to Shoigu, a number of national battalions are not controlled by the command of the Armed Forces of Ukraine and the National Guard.

The issue of recognition of the Donetsk and Lugansk Republics was raised long ago.
After that, the president gave the floor to Dmitry Medvedev, who holds the post of deputy head of the Security Council of the Russian Federation.

Ukraine, as we see, does not need the territories of Donbass. The people living in these territories, and this is 800 thousand Russians, are deprived of benefits by Ukraine. Ukraine is not going to implement the Minsk measures. It is not profitable for the current regime in Ukraine, namely the incumbent president, to follow the agreements. The President of Ukraine himself claims that the Minsk agreements are harmful.
According to Medvedev, Zelensky is fooling his foreign colleagues.

I remember 2008. Then I had to make a decision to recognize South Ossetia and Abkhazia. This has saved the lives of hundreds of thousands of people living there. This was a lesson for NATO. That you can't do that to Russia. Today, in some ways, it is more difficult, and it can be easier. More difficult - the conflict is incomparable in scale. Easier - because we know what will happen. We understand how to resist sanctions pressure. We have 14 years of experience for the future. It will be difficult, but after a while the tension that is now vibrating around our country will subside. They themselves will ask us to return to the discussion of questions of strategic security. Like Bulgakov: never ask for anything - they themselves will come, they themselves will offer.
Ctrl Enter
Noticed oshЫbku Highlight text and press. Ctrl + Enter
Military Reviewin Yandex News
Military Reviewin Yandex Zen
238 comments
Ad