Posthumous appeal of I. S. Dorokhov, hero of the Patriotic War 1812 of the year

25 September 2012
1
Behind the stingy short lines of numerous historical biographies of the heroes of the Patriotic War of 1812, it is difficult to discern the majestic fate of some of the participants in that glorious military era, since they did not leave behind them either memories or any written archives that would reveal in detail the course of these events far from us. The figure of Ivan Semyonovich Dorokhov is no exception, who, nevertheless, in the history of military chronicles of those years remained in memory not only as a brave general, but also as the author of a short but significant letter. The letter, which in itself reveals the character of Dorokhov's personality, shows his attitude towards his Motherland, which called him to defend himself from enemies, and for which he had to sacrifice his life ...

Ivan Dorokhov was born 26 on April 1762 of the year in Tula, a noble family of seconds-major, a member of the Russian-Turkish wars. Since childhood, Dorokhov was brought up in the Engineering Cadet Corps, from which he was released in the rank of under-ensign in 1787 and transferred to service in the Smolensk Infantry Regiment.
The Smolensk regiment, included in the corps of Suvorov, and with it Ivan Dorokhov, participates in battles against the Turks. Here he shows himself for the first time and shows - in the battles of Putn 20 in July and under Fokshan 21 of July 1789 of the year, and later on at the famous defeat of the Turkish troops at Rymnik (A. Suvorov later noted in the report " his knowledge with the Ober Quartermister was particularly needed ").

The heroic participation in these battles brought Dorokhov a promotion, having received the captain, he transferred to the Fanagori grenadier regiment, who had a special account with the great commander Suvorov. 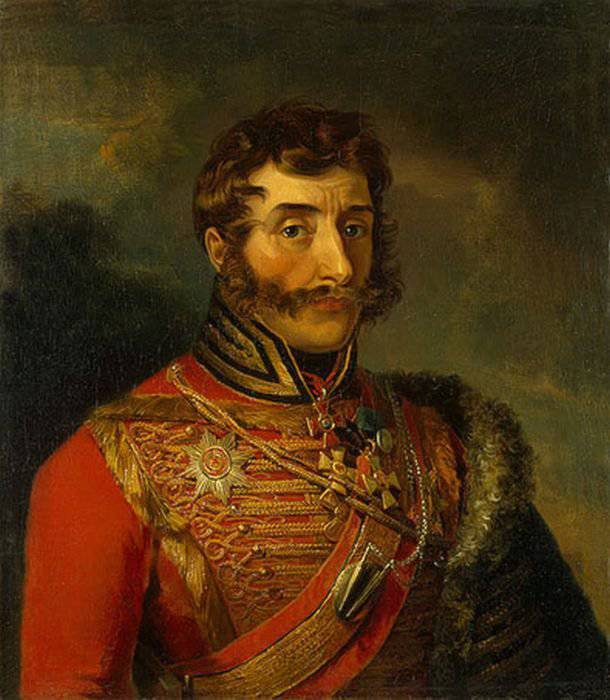 In 1794, Ivan Semyonovich participated in hostilities in Poland, where an uprising broke out at that time. The battles of Maciejowitz and the storming of Prague (the outskirts of Warsaw) under the direct command of Suvorov brought Ivan Dorokhov not only the new rank of second major (and the golden cross), but also the first wounds he received, nevertheless, continued to fight.

In 1798, he gets the rank of colonel, and the following years are covered with white spots for historians who are interested in Dorokhov’s life - for some reason he retires, which most likely has nothing to do with military affairs.

In 1802, Ivan Dorokhov returned to the ranks of the Russian army, and the following year received the rank of major general. Appointed to command the Izum Hussars, the Dorokhov begins a new period of his military life.

In 1806, Dorokhov can be seen, speaking in the composition of the troops of the corps of Bennigsen to the borders of East Prussia. During this campaign, Dorokhov repeatedly participated in the battles against the French, including the Battle of Pultus and the famous Battle of Preuss-Eylau (February 1807), and in the battle of the village Gough received a serious contusion in the leg.

In the war of 1808-1809, Ivan Semyonovich acts on the shores of the Baltic Sea, defending himself on this front from the united Anglo-Swedish naval troops.

For participating in these hostilities, Dorokhov received several military military awards, and the izyum hussars under his leadership were recognized as one of the best cavalry regiments and received St. George's pipes for heroic merit.

He started the 1812 Patriotic War of the Year, Dorokhov, from an incident that could be fatal for him under certain circumstances. At that moment, when Napoleon, along with the troops, was already crossing the Neman, Ivan Semyonovich with his detachment (3 cavalry, 2 Jaeger regiment and light artillery company) was quartered in Orani, between Grodno and Vilna. The order to retreat Dorokhov was forgotten to be given on time, as a result of which he was cut off from Barclay de Tolly's 1 army, to which he was seconded. Then, considering it appropriate to join the 2 Army of Bagration, Dorokhov with minor skirmishes, skillfully maneuvering and evading fighting with the main forces of the French, reached the village of Volozhino, where the Dorokhov squad lost only 60 person).

Having joined the rearguard of the army of Bagration, a detachment of Ivan Dorokhov reached Moscow, almost daily fighting the vanguard of Napoleon's troops. Very boldly (according to the statement of Kutuzov himself) Dorokhov acted during the Borodino battle, rushing to the attack on the French cavalry near the village of Semenovskaya. This feat gave him the rank of lieutenant general.

However, Ivan Semenovich Dorokhov glorified another episode of the Patriotic War with Napoleon.

The city of Vereya - lying for 110 kilometers from Moscow, between Smolensk and Kaluga roads, was key for successful combat operations of both Russian and French troops. Napoleonic troops, garrisoned in this fortified city-fortress, hampered the actions of the partisans in the north-west of Moscow.

It was Vereya who ordered Kutuzov to capture Dorokhov, giving him the 2 battalion of infantry, the 4 squadron of hussars and several hundred selected Cossacks.
Ivan Dorokhov spoke from the Tarutino camp of 26 September. To capture the city, General Dorokhov decided to use cunning deceptive tactics: having mounted cavalry units on the roads leading to Moscow and Mozhaysk, he himself approached Vereya with an infantry squad. At the same time, ordering to take the city without shots and belligerent cries, Dorokhov began storming the sleeping city just before dawn. Eliminating the enemy pickets and breaking into Vereya, the Russian fighters decided to do it in just half an hour - the French almost did not even resist.

The capture of Vereya resulted in the capture of three hundred and eighty-five Napoleonic soldiers and officers, the commandant of the fortress (with a total loss of the Dorohov squad in 30 people). Enemy stock weapons and the foodstuffs stored in the cellars of the fortress of Verey were immediately distributed to the townspeople and peasants whom Dorokhov instructed to fight the French villains.

Here is how Kutuzov Dorokhov briefly reports on the capture of Vereya: "By the order of Your Grace, the city of Verei was taken by storm", which the field marshal later noted in the general order of the army. The modesty of this report only underlines the heroism and extraordinary courage of General Dorokhov, who resolved in a matter of hours an important strategic problem.

Having made Vereya the outpost of the Russian troops, Ivan Semenovich now fights with the French troops in the Smolensk and Kaluga areas. The information from Napoleon’s army retreating to Kaluga from Dorokhov Kutuzov was extremely important, - the plan of the French commander became clear: to arrange a general battle for Maloyaroslavets (it happens on October 24 of 1812). After a two-day bloody battle (the city passed from hand to hand the whole 8 time!) Russians finally achieve military superiority, and the French army begins a total retreat towards the borders of Russia.

Then fate prepared an unpleasant surprise for Dorokhov: when the battle of Maloyaroslavets was already subsiding, he was wounded by a bullet in the heel, and this wound turned out to be fatal for him - because of his illness from the wound, he would never return to the Russian army.

At the beginning of 1815, Ivan Semenovich Dorokhov dies.

Before his death, he writes the same letter with which we began our story about this hero of World War 1812. Here’s how it sounds:
"" If you heard about General Dorokhov, who liberated your city from the enemy of our fatherland, respectable matches, I expect you to reward me to give me three avenue of land for my eternal reassurance at the church where I stormed the strengthening of the enemy, smashing I’m going to make him happy. For that, my children will be grateful. General Dorokhov. "

This is the posthumous appeal of Ivan Dorokhov to the Vereians, people whom he brought liberation from foreign invaders three years ago. Probably, Dorokhov understood that the battle of Verey was some kind of culmination of his life, some kind of combat final feature, the purpose with which he came to this world and having fulfilled it was forced to leave it.

The posthumous will of I. S. Dorokhov was executed, he was buried in Vereya. 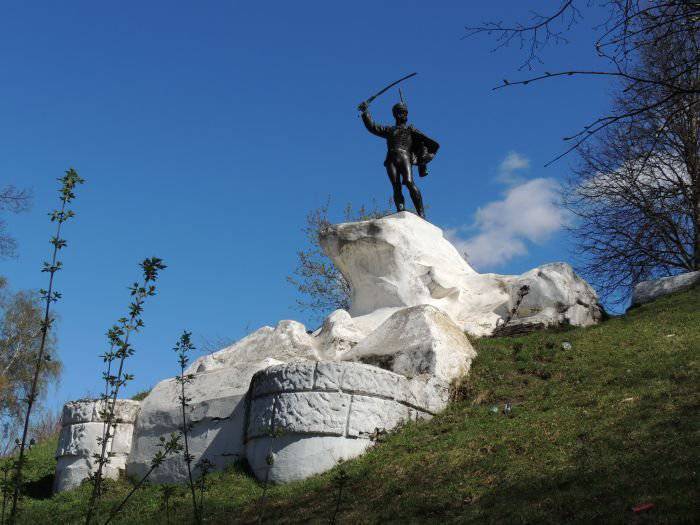