Force the United States to abandon a surprise disarming strike

Is the US considering a surprise disarming strike against Russia?

Yes, they are considering. The United States is the strongest nuclear superpower militarily, economically and technologically, claiming world leadership, and even world domination. Russia is inferior to the United States in many areas, and the only thing that keeps the United States from “grabbing our throats” is strategic nuclear weapon. There is no doubt that US leaders consider this a flagrant injustice - after the collapse of the USSR, they were sure that they had almost won, and now Russia, hiding behind a nuclear sword, allows itself to be insolent. If Russia did not have nuclear weapons now, military conflicts with the former Soviet republics armed with American weapons and openly supported by the United States would constantly burn along our borders, the Japanese would have already landed on the Kuril Islands, the Kaliningrad region would have been divided between Poland and Lithuania, and so on. etc.

The United States tried to break nuclear parity throughout the Cold War - the deployment of anti-missile defense systems, medium-range ballistic missiles in Europe - all these are links in the same chain. We like to talk about cutting the American budget, that programs like Star Wars are just an appearance aimed at disinforming the leadership of the USSR, but this is far from the case. They really tried, although so far they have not succeeded, but after all, the task is not an easy one. And the US will never give up its intentions to gain a unilateral strategic advantage.

Potential U.S. actions to break nuclear parity have previously been discussed in the series "The decline of the nuclear triad":

What is the main threat in US actions?

First of all, the threat is not that the United States will be able to with impunity to inflict a sudden disarming strike on Russia, and the fact that they can decidethat they can do it. Anyone who has worked in large commercial and government structures knows how information can be distorted when moving from top to bottom and from bottom to top, when analysts' data is aggregated, averaged, generalized, misinterpreted, when reservations and conditions are lost, and as a result, two plus two becomes equal not to four, but to five. Under these conditions, any "border" conditions can be interpreted incorrectly, including for the sake of the political situation.

It can be assumed that the probability of making critical decisions by the US leadership can be significantly reduced by forming an unambiguous public and professional opinion, confidence in the guaranteed ability of Russia's strategic nuclear forces (SNF) to withstand/repel a sudden disarming strike and strike back.

How can this be implemented?

Delivering a sudden disarming strike provides for the absence of a threatened period - strategic missile submarines (SSBNs) and mobile ground-based missile systems (PGRK) do not have time to leave their bases if they were in them at the time of the strike, intercontinental ballistic missiles (ICBMs) do not have time get a command to start.

PGRK and SSBNs that did not leave their bases at the time of a sudden disarming strike are just easy targets. Image by wikipedia.org
The issues of increasing the survivability of strategic missile forces were considered in the articles of the series "The evolution of the nuclear triad":

The problem is that the proposed measures require significant financial resources, changes in the balance of forces of strategic nuclear forces and will be implemented for quite a long time. At the same time, the sustainability of, for example, Russian SSBNs is currently in question.

Of course, it would be best to ensure the safe deployment of SSBNs with strong surface fleet and escort by multi-purpose nuclear submarines (SSNs), but it is far from certain that the Russian fleet will be able to solve this problem, even if it does only this. And there is no guarantee that the situation will change for the better in the near future. In addition, by focusing all the resources of the fleet on the protection of SSBNs, we will leave other vital areas without attention.

What other options are there?

Imagine that a decision is made to equip Russian SSBNs with a layered anti-torpedo defense system (ATD), the concept of which was discussed in the article "Octopus" - a complex of active anti-torpedo protection, which will provide the SSBNs with a high probability of withstanding the first sudden torpedo strike of the enemy and launching ballistic missiles.

The concept of KAPTZ "Octopus"
Information about the creation of various subsystems of layered anti-tank defense for submarines circulates to a limited extent in the media, and one fine day news reports appear: “On December 15, 2024, during the exercises conducted by the Russian Navy, the Dmitry Donskoy strategic missile submarine successfully intercepted four torpedoes fired by the Kazan multi-purpose nuclear submarine with the help of an active anti-torpedo defense complex ...”

In the future, this information is officially confirmed by high-ranking officials, several reports are published on specialized TV channels, some technical details of the tests appear, during which, as it turns out, four torpedoes imitating conditional enemy torpedoes were actually hit. It is stated that the layered anti-tank missile system installed on SSBNs and multi-purpose submarines is potentially capable of intercepting more than a dozen enemy torpedoes at the same time.

The question arises - if the information about the appearance and deployment of a layered anti-tank missile defense system on Russian SSBNs is confirmed, will the enemy risk trying to destroy them during a sudden disarming strike, as, in fact, the strike itself?

Let's consider the worst case scenario. For example, suppose that the United States managed to disable the ground component of the strategic nuclear forces - to destroy ICBMs in silo launchers (silos) and PGRKs with high-precision nuclear warheads (NWBs) flying along a gentle trajectory with a minimum flight time. Pro aviation there is nothing to say about the strategic nuclear forces component - in the absence of a threatened period, strategic missile-carrying bombers have no chance of getting out of the strike.

Remain SSBNs. Presumably Russia will have twelve Project 955/955A SSBNs. With an operational voltage coefficient (KOH) of the order of 0,3–0,4, four SSBNs will be on alert. Those that will stand at the piers are just targets, and it will be even easier for the enemy to destroy them than ICBMs in silos and PGRKs. Yes, and incomparably more profitable - you can cover hundreds of ours with one or two of their YaBBs.

Suppose that in the course of delivering a sudden disarming strike, the enemy suddenly attacked the four remaining Russian SSBNs on alert. Thanks to the layered anti-tank missile system, two managed to survive, and 192 YBBs flew in response to the enemy. The existing American missile defense system will intercept a couple of nuclear warheads - the maximum (at least for now). Thus, almost two hundred nuclear strikes will fall on American cities. But all SSBNs can potentially fight off the attack. By increasing the KOH to 0,5, we will get six SSBNs on alert or 288/576 surviving YBBs in a retaliatory strike. Any cover, for example, by multi-purpose submarines, diesel submarines and / or surface ships will further increase the survivability of the SSBNs.

Will the United States remain a superpower after a retaliatory strike of this magnitude, or will its leadership instantly pass to China? But China, too, can not waste time and, until the United States comes to its senses, “add” them with their own ICBMs?

It can be argued that US multi-purpose submarines will be able to destroy SSBNs, even with a layered anti-tank system installed on them, and that it has not been tested by real combat operations?

Be that as it may, but the enemy will be forced to take this factor into account, and in their calculations, enemy analysts will be forced to assume that about half of the Russian SSBNs will be able to survive a surprise torpedo attack and strike back. 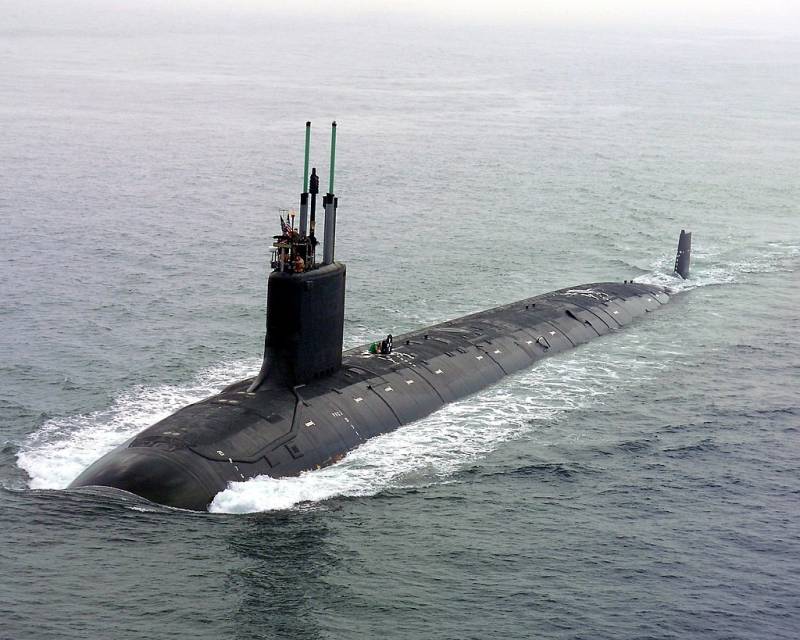 The latest American submarines. Image by wikipedia.org
The enemy’s number of multi-purpose submarines is also not infinite, in addition, if you try to track one SSBN with several submarines, they can be detected with a higher probability simply due to an increase in their number in a certain area (according to probability theory) and the need to coordinate joint actions (using connections between submarines). In addition, in critical situations, and even in the course of paired tracking of SSBNs, ridiculous incidents are not ruled out when one enemy multi-purpose submarine collides with another, one of them collides with terrain elements, one submarine attacks another instead of SSBNs, and so on. further and the like.

The presence on the SSBNs of a layered anti-torpedo defense system, by the mere fact of its existence, can force the enemy to refuse to deliver a sudden disarming strike on our country.

The psychological factor from the appearance of a layered anti-torpedo defense system on SSBNs may be more important than the military one, although this does not mean that a layered anti-torpedo defense system should be created only as a means of exerting psychological pressure on the enemy, and not as a real and effective weapon.

On the other hand, war is a way of deception. The Soviet Union paraded dummies of ICBMs, rearranged bombers at airfields, and in every other way tried to exaggerate its military power so that the United States and its allies did not dare to unleash a third world war - and they succeeded.

Even if the layered anti-torpedo defense system of the SSBN is in reality unfinished and will receive limited functionality (at least at the initial stage), but the enemy does not have reliable information about this, then its presence on the SSBN can disrupt the enemy’s decision, which is tragic for all parties about inflicting a sudden disarming strike on Russia with only one fact of its existence. And it's worth it.