In China, a thousand military factories will be privatized; development of the Chinese defense industry leads to a sharp decrease in imports of weapons 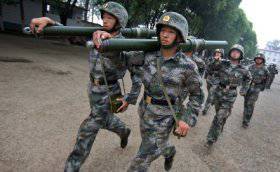 Until recently, the military potential of the People’s Liberation Army of China (PLA) consisted of models of weapons 50-s. In the 90-s of the XX century, China began to actively increase its combat power, purchasing Russian military equipment. In 20 years, the government managed to carry out an almost complete rearmament of the army. The next step in the reform was the demonopolization of the Chinese defense-industrial complex (DIC). The He Xun information portal recently reported this with reference to a report from the Chinese Academy of Sciences.

As noted in the report of the Academy, experts from several countries are concerned about the rapid growth of defense spending by the PRC. Financial investments allowed to arm the Chinese army with high-tech types weapons, reduced China's dependence on the supply of Russian weapons. In the 90 of the last century, the Chinese government launched the process of technical re-equipment of the domestic defense industry. This led to an increase in the output of Chinese military equipment, ITAR-TASS reports the message of the Chinese media.

In July of this year, Beijing announced the start of attracting investment in the country's defense industry. The new resolution stipulates that private investors and state-owned enterprises working in the defense sector will have equal opportunities in matters relating to licensing and taxes. At the same time, it is stipulated that only investors from mainland China can get access to this sector. The statement notes that investors can take part in the development and production of armaments, as well as in the restructuring of state defense enterprises.

The new decree is aimed at increasing competition in this sector, and for some projects there will be open tenders in the future. To date, private investors have participated only in the supply of components and some materials for the defense industry, but they have not been involved in large projects.

As noted in the documents of the Shanghai and Shenzhen stock exchanges, the subsidiary companies of military contractors that have undergone the primary placement procedure (IPO) intend to buy back part of the assets in state-owned parent companies for over 20 billion yuan (3,15 billion dollars). Due to future deals, the assets of subsidiaries will increase by about 100 percent, the report says. Government actions to privatize 1 thousand military factories will contribute to the initiated process of demonopolization of the country's defense industry.

China's long-term plans include the transformation of China’s State Shipbuilding Corporation, CSSC, China Corporation aviation the AVIC industry and CASIC's Aerospace and Industrial Corporation of China, an arms supplier comparable in size to the American Lockheed Martin and Northrop Grumman. In particular, AVIC intends to increase sales of products by 4 times - from 250 billion yuan (39,7 billion dollars) in 2011 to 1 trillion yuan (158,6 billion dollars) in 2020. In the coming years, about 80 percent. assets of these corporations will be placed on stock exchanges of the country.

According to the report, the capitalization of 10 of the largest military corporations in China is now 2 trillion yuan (317,2 billion dollars). The corporation-owned 70 subsidiaries are listed on the stock exchanges, among them 40 enterprises are defense. The total volume of these 70 companies is 25 percent. all assets of the aforementioned 10 corporations.

The rapid development of the potential of the Chinese defense industry has led to a gradual decrease in arms imports. According to the SIPRI Stockholm World Research Institute (SIPRI), during the 2007-2011 period. Chinese arms imports fell by 58 percent. Over the years, in terms of purchases of military equipment, China descended from leading positions in 2006 to 4 in 2011.

In the past few years, China has begun to increase research on the creation of modern missiles. Both ballistic and winged carriers are being created, as well as mobile installations for launching nuclear charges.

At the same time, despite significant progress, military experts note China’s lag behind the leading powers in a number of technologies. For this reason, Su-27 fighters, modern cruisers and Russian-made submarines are still one of the key articles of Chinese imports, summarized in the Academy's report.