New amendments to the Criminal Code: protection of statehood or the hunt for objectionable? 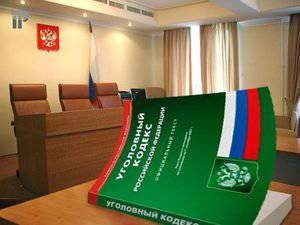 A few days ago, Russian lawmakers decided to take advantage of the clearly manifested crisis of creativity in the camp of the opposition and struck its representatives with a painful blow, as they say, below the belt. Such a blow lies in the fact that soon a special segment of the Criminal Code will be launched in the Russian Federation, which is aimed at strengthening the protection of state secrets, as well as at new measures to protect the constitutional order.

This bill was submitted to the State Duma by such a previously uncomfortable special agency as the Federal Security Service of the Russian Federation. Now, the Criminal Code is likely to be replenished with items not only about foreign spies, as well as individuals from among Russian citizens recruited by foreign intelligence services, but also about those who can be called intermediaries in divulging state secrets. Turning to more tangible objects, it can be stated that new articles or new paragraphs of old articles will be aimed at criminal prosecution of those who, with the financial support of foreign foundations and government organizations, conduct, more simply, “subversive” activities against the state. Such people can be called information mercenaries, you can be provocateurs, you can generally be called whatever you like, but the fact that the state decided to take revenge from overly active opposition movements for all the “Marches of millions”, “Control walks” and other actions that had such a clear goal as a weakening of the role of the authorities in the country. It would be quite possible to call this the opposition's power revenge for December 2011 - March 2012, if it were not for the information that the bill to toughen the fight against disclosing state secrets and shaking the country's constitutional base was submitted to the 2008 year. In this regard, it is absolutely impossible to say that he was concocted only after the recent opposition boom in the Russian Federation.

Another thing is that in 2008, this bill was sent by President Dmitry Medvedev for revision, since then it caused a serious discussion. Many four years ago, on which the light stands, criticized the FSB bill, so they considered it aimed at curtailing freedom of speech and thought in Russia, as well as at a peculiar version of the reincarnation of the famous 58 article of the Criminal Code of the RSFSR, which entered into force in 1927 year.

Recall that the 58 article of the Criminal Code of the RSFSR (its counterparts in the Criminal Code of other Union Republics under different numbers) defined such concepts as responsibility for counterrevolutionary activities, treason against the Motherland, failure to report on military traitors, counterrevolutionary sabotage, espionage, propaganda or agitation, which contain calls for the overthrow, undermining or weakening of Soviet power.

In general, if the words “counterrevolution” and “Soviet power” are removed, then it turns out that in the 2008 year, Medvedev, adhering to quite liberal principles in politics, sent for revision. Only in the 58 article there was nothing about assistance to foreign organizations in conducting hostile activities against the statehood of the country. In the new bill, which was considered by Russian lawmakers, there are such points.

By the way, if we talk about how the bill that was submitted to the State Duma four years ago was finalized, then we can say that there is almost nothing. It’s just that the situation in the country (and in the world as a whole) itself developed in such a way that the official needed the bill as an instrument of self-reinforcement, and therefore the deputies of the Lower House adopted it unanimously. As they say, someone else would have spoken against ... Then the sharp sting of political criticism would have immediately turned against this deputy, and the Ethics Committee could well have been able to remove this “apostate” from the cage with his tools.

In general, it is quite possible to say that the bill is quite tough, and it is aimed solely at protecting the very vertical that has been said so much lately. On the one hand, the zeal of the authorities in this direction is clear: I already want to arrange at the legislative level a real separation to representatives of extremely oppositional movements, who are accustomed at the expense of foreign funding to declare that those in power are right and wrong. I would like to bring all this organized by certain forces to the camarilla under the need to comply with the law.

But this bill has another side. Will our law enforcement system be able to quickly and efficiently understand such rather complicated matters as transferring some information from someone to someone, which, one way or another, could be the reason for the shaking of the constitutional order? Will the court be able to give an unequivocal answer to the question of why someone took money from foreigners: were these classic commodity-money relations or relations with the rationale for receiving certain structures outside the country of state secrets?

Obviously, if we are guided by the provisions of objective law, here any self-respecting lawyer can simply mix these kinds of accusations, as they say, with filth. Most of the cases that will be brought up under such an article can simply crumble, unless, of course, it comes to the application of the judicial system that existed in our country in the 30-40-s.

The complexity of the new draft law lies in the fact that, in essence, it does not regulate what to consider as a situation aimed at hostile activities against the Russian Federation. Here there are such words as punishment for bribery, blackmail, forcing a person to extradite state secrets, abduction of these same state secrets. But if so, then it turns out that now even an ordinary pickpocket, who fished out, for example, a wallet from an employee of the Center for Nuclear Physics, and there was a crumpled piece of paper with a code from the front door to the laboratory, can get a term as a state traitor ... Prove it that he just wanted to profit by a couple thousand rubles, but he didn’t even know about the code, he is unlikely to succeed if the justice system uses, as is often the case in our country, the presumption of guilt.

Therefore, it is worth saying that real provocateurs and persons willing to use their position to transfer information about state interests to outsiders will hardly be affected by the changes in the Criminal Code. Well, if they touch, then law enforcement will have to collect a serious legislative base, disassemble a mountain of terminological garbage, and we don’t like to do this somehow. But people who, by virtue of their official duties, are forced to contact directly with representatives of foreign countries, the changes can be completely affected. Would this not be a kind of tool for eliminating unwanted politicians, businessmen and public figures? ..
After all, seeing a person as an a priori enemy is only because he comes in contact with representatives of foreign countries, this is somehow in the style of the end of the last century's 30 ...

In this regard, it is to be hoped that lawmakers accept the draft law proposed by the FSB consciously and, realizing that, if desired, certain individuals can work against everyone; against each of the legislators themselves, including ... By the way, it’s worth expecting that if the bill is adopted and signed, then a smaller number of politicians will have a desire to speak frankly with the press: you never know what they will say ...