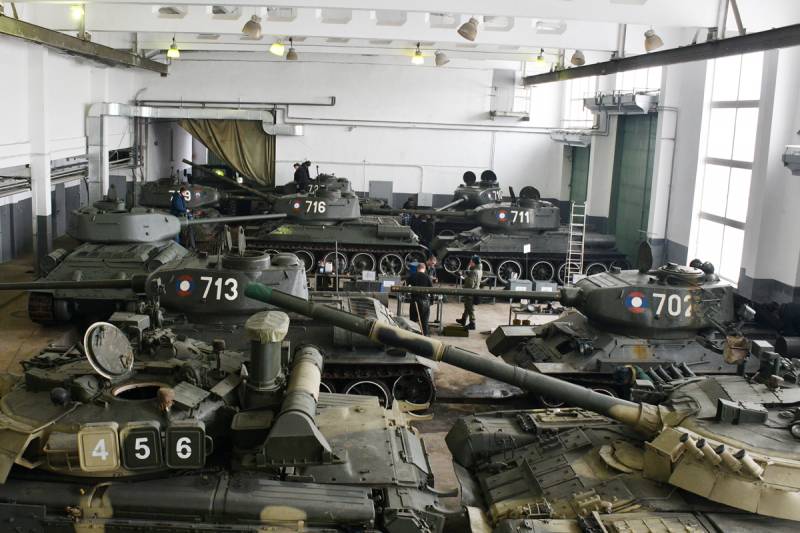 Battery around the head

In the previous part stories was talking about operating features armored vehicles. The material would be incomplete without a story about one more technical aspect. Perhaps, any experienced tanker (whether a conscript, a conscript or a regular officer) who served in the army in the "era of developed socialism" remembers this famous brand - 6STEN-140m. The importance of batteries for the combat readiness of a military unit is so great that they deserve a separate article. In any case, within the framework of my memories.

Since I have not been connected with the army for almost three decades, I decided to ask on the Internet what kind of batteries (AB) are used in tanks now, and was surprised to find that little has changed over the years: all the same lead-acid! Almost complete analogues of those that were operated in my time, albeit slightly modernized. And this means that the problems associated with them remain. For example, on the T-90 tank - the very same good old 6STEN-140m. 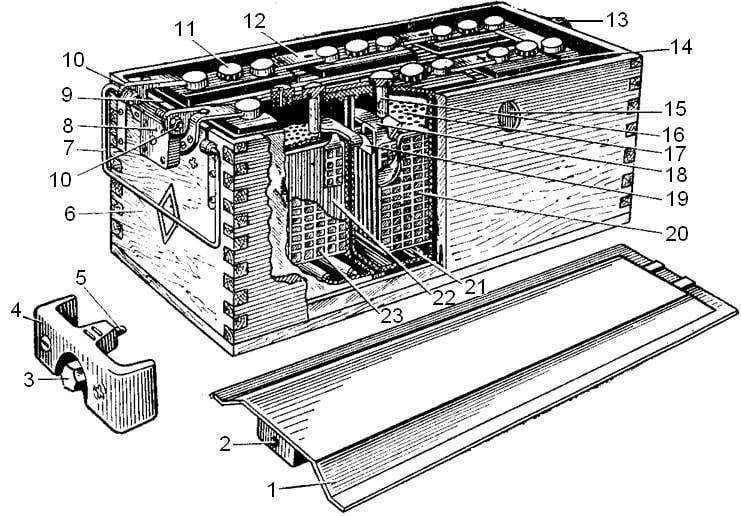 First, let's "decipher" the brand of the tank AB. The number 6 is the number of batteries in the battery. It is easy to determine the nominal voltage from it: since one lead-acid battery can produce 2 volts at its terminals, and in the battery they are connected in series, multiply by 6 and we get the output voltage of the battery, equal to 12 volts. Two letters ST mean that the battery is starter, i.e., designed to start the internal combustion engine using a starter.

Not every battery is capable of delivering large peak currents (more than 500 amperes), but lead-acid can. It is for this remarkable property, despite numerous shortcomings, that it is “tolerated”. The letter "E" denotes the material of the battery reservoir, which in this case is made of ebonite. The letter "N" stands for "new". The number 140 means the battery capacity in ampere-hours, which it gives when it is discharged by a load current equal to 0,1 capacity for 10 hours. And the small letter "m" means the material from which the separators are made, separating the positive and negative electrodes inside the batteries from each other: mipor or miplast.

The batteries are filled with a solution of sulfuric acid in distilled water (electrolyte). On the positive electrode, lead dioxide is applied as an active mass, on the negative - spongy lead. When connected to a load, an electrochemical process occurs in the battery and an electric current occurs. Theoretically, the process ends when lead sulphate is deposited on both electrodes, and water remains in the electrolyte. When such a battery is connected to the charger, the original state is restored. Reversibility is the most important property of any battery.

And now - about those same problems.

Let's start with the fact that sulfuric acid itself is an extremely corrosive liquid that requires very careful handling. It was supplied in glass bottles, with a capacity of approximately 30 liters, in special baskets, with shavings and other precautions. A distiller is needed to prepare distilled water. To prepare the electrolyte of the required density (1,25 g/cmXNUMX), a large number of instruments and fixtures were required, as well as tables for calculation.

Sufficient power chargers, special charging cabinets with exhaust ventilation are also required, since gases (a mixture of hydrogen, oxygen and sulfuric acid vapors) are released during battery charging. The room for charging and storing the battery in / part should have a sufficient number of special racks, the design of which would allow checking the density of the electrolyte and the voltage at the terminals. The temperature (optimal) should be close to zero, since under such conditions the self-discharge of the battery is minimal.

The battery charging process itself required constant monitoring and adjustment. It was necessary to monitor the magnitude of the charging voltage, the temperature of the electrolyte, control the process of increasing (or, more correctly, restoring) its density, setting the beginning of the last stage of charging in time, etc.

A lot more can be said about equipping the battery, but that's enough for now. And on the AB machine, they also require constant attention, control and care. Starting with the T-34 (they installed 6ST-128 ABs), all tanks are equipped with 4 ABs connected in parallel-series, so that the output is 24 volts, which corresponds to the voltage of the tank's on-board network, and the total capacity is thus 280 a/h. The main way to start a tank engine was declared by the manufacturer to be start-up with compressed air, and the AB was intended to be an auxiliary or backup tool.

In practice, everything often happened exactly the opposite. For the air inlet on the T-55 tank, there were two 5-liter high-pressure cylinders, air into which was pumped up to 150 atm by an onboard compressor. In the parking lot, the cylinders were closed with valves, when starting, the valves were unscrewed, the driver pressed the button, and if the pressure in the cylinders was sufficient (in summer - at least 45 atm, in winter - at least 80), the engine started safely, and the compressor, if in cylinders pressure dropped below 130 atm, recharged them.

But! The devil, as always, was in the details. The fact is that the weak point of the air cylinders was the membranes of the shut-off valves, which, as the number of openings and closings increased, quickly crumpled, and a gradual air leak occurred. And yes - you guessed it! - these membranes for replacement during the day with fire were not to be found.

And very often starting the engine with the help of a starter became the main and only possible one. They also used a combined start, while simultaneously pressing the air inlet and starter buttons. So in reality, ABs were in most cases the main means of starting the engine. True, I don’t want to mention the third army method - from a tugboat, because this “method” shortened the resource of more than one hundred tank engines.

AB was not allowed to discharge below 50% capacity in summer and below 25% in winter. These requirements were often violated, since it was troublesome to determine this degree without removing the AB from the tank, therefore, as long as it was possible to start the engine, they were not removed for charging. And with a deep discharge (as well as with a systematic undercharge), the so-called sulfation of the plates (electrodes) occurred, in which lead sulfate, which was hardly soluble in the electrolyte, was formed on them, which subsequently did not take part in the processes.

There was also a polarity reversal. The capacity of such an AB fell, the service life was reduced. A short circuit at the terminals led to their melting and warping of the plates inside the tanks, as a result of which the active mass also crumbled. 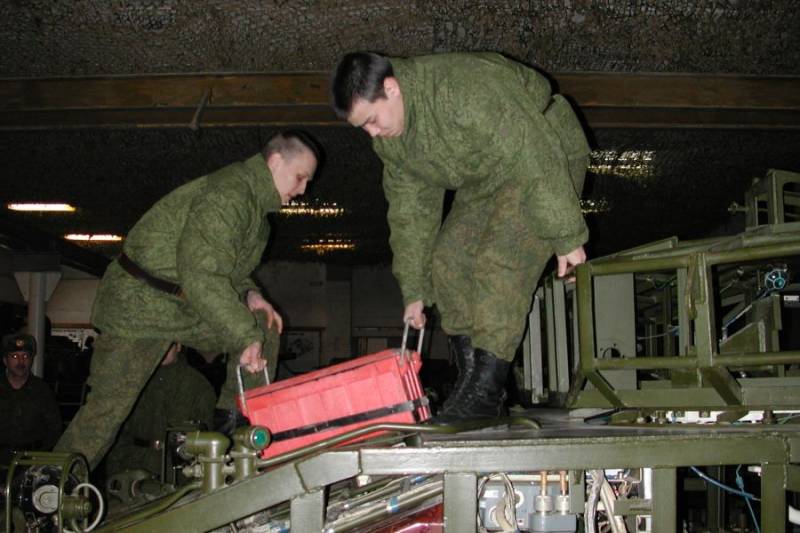 Charging the battery to 100% required a lot of time, up to 10 hours. In practice, they were often recharged rather than charged, which also shortened their service life. It was necessary to regularly check the electrolyte level in the tanks, which also could not be done without removing the battery from the tank. In the summer, in hot weather, water evaporated from the electrolyte first of all, and only water had to be added. I mentioned earlier how undesirable bumps and falls were for AB. At the same time, the active mass fell off the electrodes, not only did the capacity of such batteries fall, but this mass also ended up at the bottom of the tank, closing the opposite-pole electrodes (plates) together.

And, of course, ABs really disliked contamination of their surface. On such a surface, an increased self-discharge occurred (no more than 2% per day was allowed). Such a battery quickly discharged if not used for a long time on a running tank. It was possible to restore such outrages, but not completely and not always. This was only possible for a well-trained specialist who perfectly understands all the processes occurring in the battery.

And where was it to be taken? It was considered great happiness to have just a trained soldier, what kind of deep knowledge of internal processes is there. If there were any training units or units that trained accumulator workers, then they were unknown to me. At best, short training camps were organized on the basis of rembats. And then how lucky. If the soldiers were really trained at these training camps, it's one thing. If something was built or dug, it was different.

But a lot, if not all, depended on the normal operation of the battery and battery workers. Often I had to deal with the "growing" of accumulators on their own, relying on their knowledge and skills. And it was necessary that this soldier studied well at school at one time, but, as you might guess, those who studied well at school usually studied at universities, and did not serve in the army.

It often happened that glass hydrometers were in short supply, without which one could not determine the density. They were smashed rather quickly, and you won’t find new ones with fire during the day either. Distillers were even more in short supply. I will hint that their principle of operation is similar to that of a moonshine still.

The capacity given off by the battery decreased with a decrease in the temperature of the electrolyte (at minus 25 degrees, it approached zero). At minus 30, even in a charged battery, the electrolyte could freeze. In winter, its density was increased by 0,01–0,02 (1,29–1,31). Therefore, leaving AB on tanks in such conditions was not only useless, but also dangerous. I drank plenty of these winter problems when I served in the Amur Region, and I know them firsthand.

In general, strictly speaking, the professional suitability of technical officers could be judged only by the state of the battery economy.

I tried to the best of my ability in this article to show that for the successful and trouble-free use of tank ABs, a sufficiently high level of technical culture and knowledge of all personnel who in one way or another came into contact with them in their official activities was required. Since the late 60s and early 70s, this level has gradually but steadily declined.