Standing on the Ugra 2.0: what can be agreed with the West without war 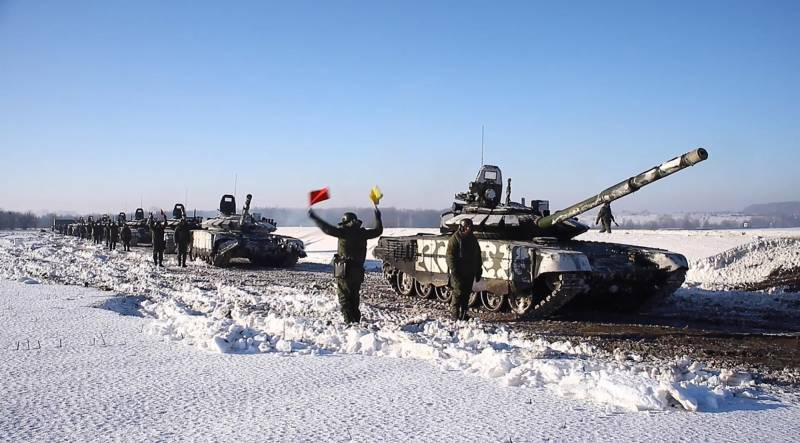 Trying to hear the obvious

The leaders of the NATO countries frequented Moscow. First, Macron tried to win "peacemaker" points in the election race, now Chancellor Olaf Scholz has come to the Kremlin. Vladimir Putin talked with the first for five hours, with the second for only three, but in both cases the dialogue did not go very well. With such results and such a distance between the leaders (in the truest sense of the word), it was possible to hold negotiations in an online format.

However, the very fact of building a line of dialogue between Russia and Europe already inspires confidence that the West has heard the demands after all. Unfortunately, the Kremlin has recently had to talk to foreign "colleagues" from a position of strength.

In any planning, it is necessary to take into account the possible moves of the enemy. In its confrontation with NATO, Russia initially placed itself in a privileged position, putting forward unfeasible demands - to withdraw the bloc's forces to the 1997 lines and guarantee non-expansion to the east.

From the very beginning it was clear that Brussels and Washington would not accept these conditions. But the Kremlin's response was difficult to predict - the so-called "black swans" have always been the calling card of the country's leadership.

At the same time, the moment of presenting the ultimatums was chosen by Moscow as an opportune moment, although there were some paradoxes here as well.

On the one hand, the build-up of NATO's presence in Europe began even before Biden. Deliveries of lethal weapons Trump also started in Ukraine, he initiated the nuclear arms race, made scandals in NATO due to shortfalls in funds and, to put it simply, rowdy in the military-political space. Moscow appreciated Donald's provocations inside the country when he failed to get re-elected - one storming of the White House was worth something.

In general, talking with Trump in a raised voice and with bared daggers was clearly dangerous. The former financial tycoon is impulsive and prone to making rash decisions. Including a military one - everyone remembers his Tomahawk strike on Syria only because of his daughter's hysteria about Assad's "chemical attack."

Old Biden is more adequate in this sense, although he confuses Ukraine, Syria and Afghanistan in conversations. In addition, the current US president's portfolio of unresolved tasks includes China's growing nuclear potential, an internal crisis in the country, and a rumpled image due to their flight from Afghanistan. Despite publicly insulting Putin (“whoever calls names, that’s what they call”), Biden extended the START-3 Treaty and still has not blocked Nord Stream-2.

So the Kremlin decided that this character can be put under pressure without fear of the degradation of relations to the state of nuclear war. In this sense, Trump was very similar to the current Ukrainian leader Zelensky. It was better not to have a dialogue with the first from a position of strength, and it was not worth talking to the second at all because of incompetence. Unsurprisingly, Trump is a businessman accustomed to going all-in, while Zelensky is just a retired comedian. Both have a very indirect relationship to big politics.

It is noteworthy that Biden is so uninitiative and cautious that in the current aggravation he did not even try to project force on Russian partners. How welcome would be military actions somewhere in Syria, demonstrating the determination of the United States. But no, only the already unfortunate Ukrainian people decided to intimidate.

Not only the leaders of France and Germany flew to Moscow to seek permission, but Joe Biden also turned to the Russians on the evening of February 15. The speech turned out to be unexpectedly optimistic. The President of the United States, in particular, said:

“We do not threaten the Russians and do not want destabilization in Russia. I appeal to the citizens of Russia - you are not our enemies. And I do not believe that anyone wants a bloody and destructive war against Ukraine, a country with which you have such close ties, a common история and culture. 77 years ago, our peoples fought side by side to end the worst war in history."

Do you feel mood swings?

Suffice it to recall the "sanctions from hell" with which Biden, even before he was president, threatened Russia. Or about the threat of technological sanctions aimed precisely at the quality of life of ordinary Russians. And now Biden remembered the joint struggle of Russians and Americans with the Nazis. The only thing left to do is glimpse…

It seems that the old man with the company in the White House exhaled in unison and with relief after the failed Russian offensive on Kiev on February 15th. Biden, in his speech, reached the point of the previously unthinkable - he told the country that possible sanctions against Russia could ruin the life of the Americans themselves. And this is a new stage in the development of the situation. It is also important to note the clear absence of victorious rhetoric in the words of the American president. He does not perceive the withdrawal of Russian forces that has begun as a sign of weakness in the Kremlin, at least not yet.

“We can welcome that the President of the United States, one of the largest countries in the world, one of the most powerful states, really thinks about the Russian people. This, perhaps, should impress us. Of course, we would prefer, however, not to listen to various threats about what will happen to us if we do something there that we are not going to do.

Is it time to celebrate victory?

"Standing on the Ugra 2.0", which is so aptly called the current crisis on the borders of Ukraine, ends with an obvious profit for Russia. Without imitation of a large-scale offensive by forces fleet and the ground forces, the conversation with the NATO countries did not develop. Recall last year, when Russia defiantly broke off relations with the North Atlantic Alliance, expelled the information bureau and the NATO military mission from Moscow. This is a typical diplomatic demarche, signaling to the "partners" that something urgently needs to be changed in the relationship. It did not work - there was no progress.

The second phase of the actions of Russian diplomacy resulted in Russia's December proposals to roll back the alliance's forces several hundred kilometers to the west. Again, they did not understand and did not take steps towards. It remains only, as Biden said, to concentrate up to 150 fighters on the border, so that they still sit down at the negotiating table.

What can be expected from the coming détente in Russia-NATO relations? It's easier to say what not to expect.

It is not worth waiting for some fundamental agreements in the manner of "guarantees of non-expansion of NATO." Firstly, the West is not ready to lose its reputation, and secondly, all these agreements on paper are worthless. The history of compliance with the "Molotov-Ribbentop Non-Aggression Pact" is the clearest confirmation of this. Only agreements can be seriously considered, the execution of which can be checked by sudden inspections. For example, free access to Romanian and Polish Mk-41 installations, in which on paper there is an anti-missile Standard Missile 3, but potentially there may be Tomahawks.

We must be ready, in turn, to provide access to our Iskanders, so that our “colleagues” can sleep peacefully. The Americans already stuttered about this when they proposed resuming the dialogue on the control of medium-range and shorter-range missiles. In general, if you carefully look at the response letter of the Americans to the Russian ultimatum, then there are much more proposals for dialogue in it than negative ones. And there are no less diplomatic negotiations here for a couple of years ahead.

The bottom line is only one bitter pill - Russia at the beginning of 2022 spent its last argument in forcing the West to talk on an equal footing. Will the hotheads of the North Atlantic Alliance believe in the seriousness of the Kremlin's intentions when the Russian army and navy are once again concentrated on the western frontiers? Or will preventive strikes, which our hotheads have already demanded so much, already be needed for this?