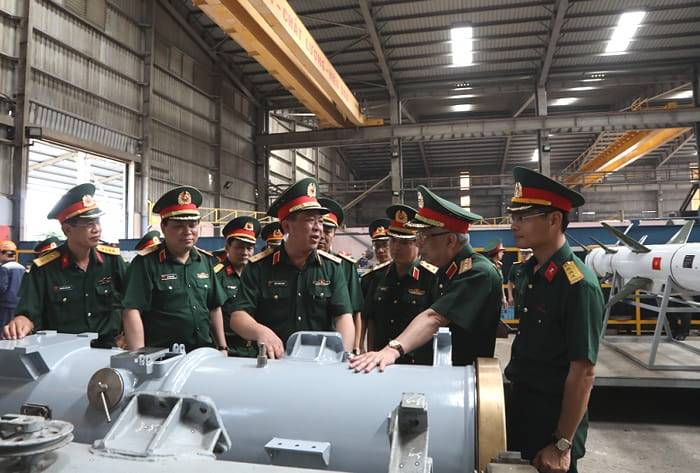 Representatives of the Vietnamese army get acquainted with the production of VCM-01 missiles at the Z189 plant. Photo QPVM

In the recent past, the Vietnamese industry has launched mass production of the new VCM-01 anti-ship missile. This product is called its own development, but foreign solutions and technologies were used in its creation. The main source of ideas and components was the Russian anti-ship missile X-35E Uran-E.

Not much is known about the origins of the Vietnamese VCM-01 project, and the available information is mostly sketchy. In addition, some information from open sources simply contradict each other. Nevertheless, it is possible to draw up a rough picture and understand how and when the first Vietnamese anti-ship missiles were developed.

At the beginning of the 35s, the Vietnamese Navy ordered from Russia significant quantities of X-180 anti-ship missiles for export. According to various sources, it was about 200-XNUMX products. Such weapon it was planned to use on different ships and boats. The fulfillment of Vietnamese orders took quite a long time and was completed only in the first half of the XNUMXs. 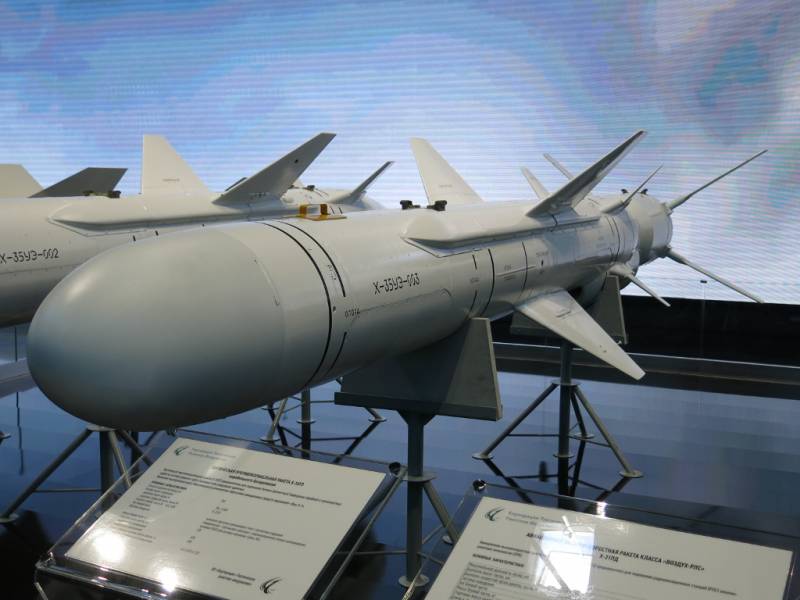 Rocket Kh-35UE. Photo by Wikimedia Commons
According to some reports, in 2010-12. Russia and Vietnam began to discuss the organization of the licensed assembly of "Uranium" at the production facilities of the customer. The exact results of the negotiations remained unknown, but subsequent events became a transparent hint of their successful completion and the conclusion of mutually beneficial agreements.

In 2015, Vietnam showed at one of its exhibitions a prototype of its own anti-ship missiles under the designation KCT-15 and a launcher for such a product. Outwardly and in terms of its characteristics, the Vietnamese missile was similar to the Russian Kh-35E. This suggested that the KCT-15 was actually a locally assembled Uranus. However, the principles of production, the degree of localization, etc. remained unknown.

In 2019, it became known that the development of a new "Vietnamese" missile was not limited to the KCT-15 project. Based on the available solutions and technologies, the following project was created with the working designation "A1". The new type of missile was named VCM-01 (Vietnam Cruise Missile No. 1). Like the previous product, this rocket did not differ externally from the Russian Uranus.

The role of Russian industry in the VCM-01 project remains unknown. At the beginning of 2020, information appeared about the possible participation in the project of enterprises from other foreign countries. It was reported that Vietnam plans to purchase turbojet engines for mass-produced missiles from South Korea or a license for their independent production. The possibility of purchasing products from other countries was not excluded.

Already in May 2020, the Vietnamese media talked about the launch of mass production of VCM-01 missiles. The assembly of products is carried out at the shipyard Z189. At the end of last year, the production of modern anti-ship missiles again fell into news. From these reports it followed that the assembly of missiles would be carried out at the M3 Communication enterprise, which is part of the Viettel group. 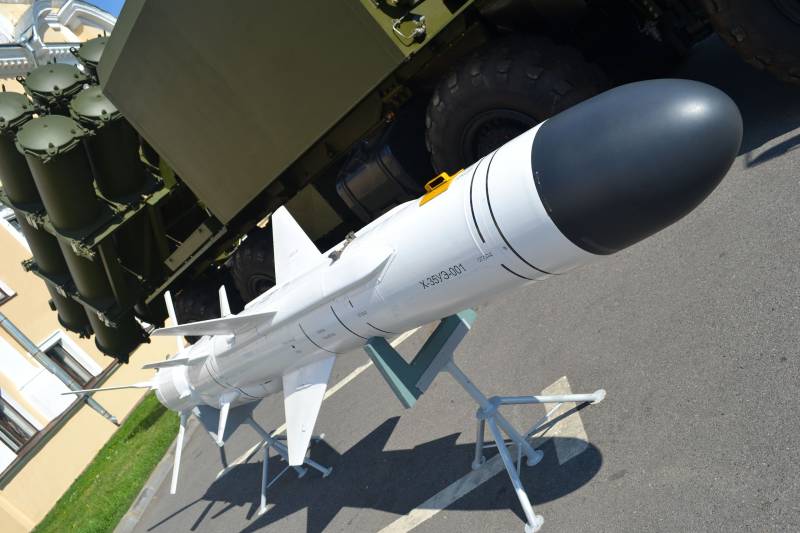 Rocket X-35 against the background of the launcher of the complex "Ball". Photo by Wikimedia Commons
Until recently, there were no official reports on the tests of the new missile. According to unofficial data, test launches have been carried out several times since 2018. The launch of experimental missiles was carried out from ground installations and ships. At the end of last year, tests of the coastal missile system based on the VCM-01 began.

Outwardly, the new Vietnamese anti-ship missiles of the KSE-15 / VCM-01 type are practically indistinguishable from the Russian Kh-35E. Apparently, the overall and weight characteristics are also close or identical. You can also assume the repetition of the design and principles of operation, obtaining the same flight performance and combat characteristics. However, the Vietnamese product should have some differences that can affect the parameters and potential.

The VCM-01 is a subsonic cruise missile designed to attack surface targets. It is made in a cylindrical body of high elongation with an animated radio-transparent head fairing. On the bottom of the hull there is an air intake of the propulsion engine, partially covered by a protruding fairing. The tail nozzle at launch is covered by the starting engine. 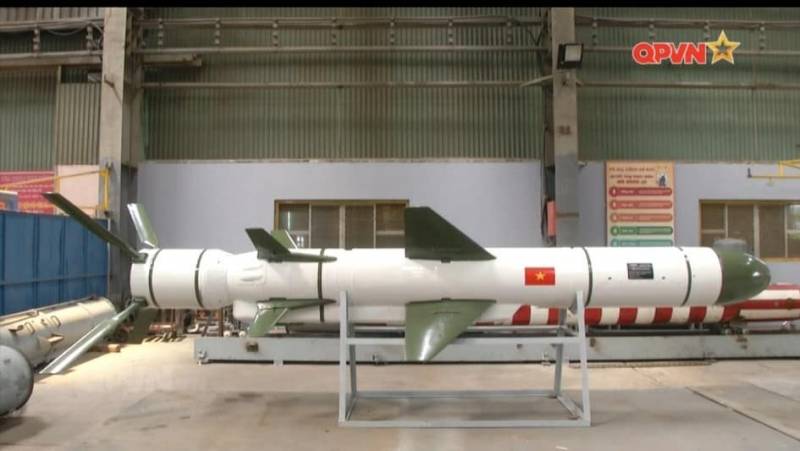 Rocket VCM-01 in flight configuration. Photo QPVM
The set of planes includes X-shaped wings in the center of the hull and tail rudders of a similar layout. The resettable starting engine has its own stabilizers. All planes are made collapsible and occupy a working position when leaving the launcher.

Serial missiles, apparently, are equipped with a short-life turbojet Samsung Techwin SS-760K of South Korean or licensed production. This product provides high subsonic flight speed, incl. at low altitudes. The launch range may be limited to 300 km, due to restrictions on the export of missile technology.

It is supposed to have an active radar homing head and other controls similar to those used on the Kh-35E. At the same time, all devices can be manufactured by Vietnam according to foreign documentation. Also, independent development of electronics based on available components and technologies is not excluded.

Like the original Uran anti-ship missile, the Vietnamese product is supplied and used with transport and launch containers. A standard launcher for four TPKs has also been developed, suitable for use with different media. So, on the corvettes pr. 11611E "Gepard-3.9" two installations are mounted under the Kh-35 / VCM-01 - a total of 8 missiles. Missile boats carry one installation each. 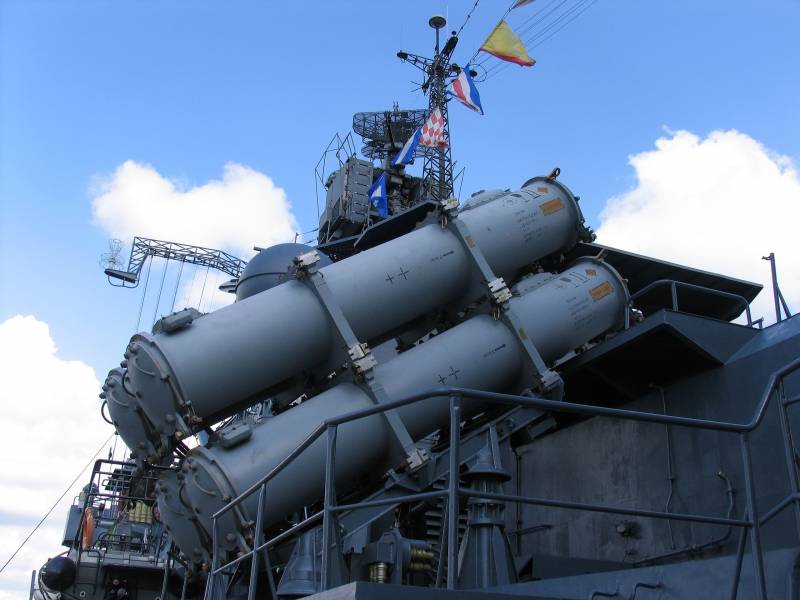 Ship launcher for missiles "Uranus". Photo by Wikimedia Commons
Recently, a coastal missile system based on the VCM-01 has been tested. The battery of such a system includes a self-propelled command post and four combat vehicles built on a three-axle KamAZ chassis. The transportable ammunition load, ready for use, includes four missiles on each combat vehicle. In its appearance and functions, the Vietnamese complex is an analogue of the Russian system "Ball". At the same time, it is inferior to the "Bal" in terms of the number of missiles on the installations.

From a few official reports, it follows that the Vietnamese anti-ship missiles VCM-01 coped with the tests and reached serial production. Serial products should go to the arsenals of the Navy and complement the Russian-made missiles available there. Due to these processes, it becomes possible to use different types of anti-ship missiles and not rely only on imported products.

At the same time, the exact degree of localization of production is unknown. Vietnam can assemble the missile's airframe, warhead and some general systems, but has had to find a suitable foreign engine. The same processes could accompany the development and launch of the production of automation and GOS, although one cannot exclude their creation by the forces of the Vietnamese industry on the basis of available components and technologies. 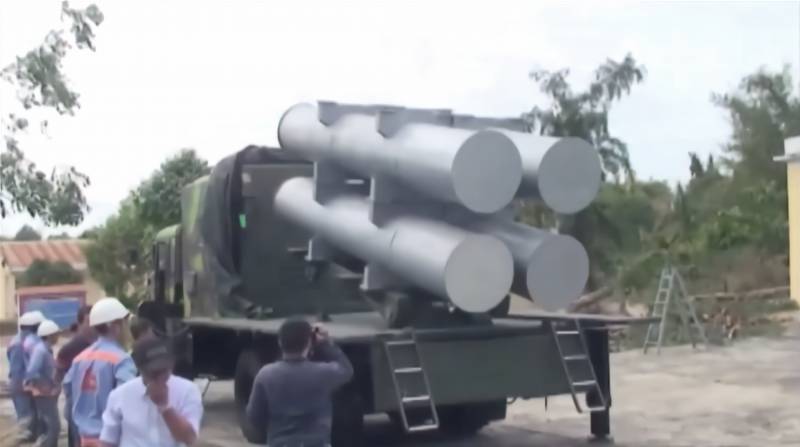 Launcher of the VCM-01 coastal missile system. Photo Twitter.com/AnnQuann
The question of exact characteristics and combat capabilities remains open. Vietnam does not have much experience in the development of modern missile weapons. Because of this, the Vietnamese VCM-01 missile may be inferior in performance and potential to the base X-35E. However, the Russian "Uran-E" is distinguished by a certain simplicity and solid age, which to a certain extent simplifies its copying.

Regardless of the exact level of performance, the KCT-15 / VCM-01 project is of particular importance for the development of the weapons of the Vietnamese Navy. First of all, its own rocket simplifies the operation of existing ships and missile boats. There is also a backlog for the development of this part fleet. Based on the VCM-01, a modern coastal missile system has been developed, which is also of great interest to the Vietnamese army.

Development instead of purchase

It is likely that the development of the project will continue. Development organizations will have to correct newly identified shortcomings, improve the design and improve the characteristics of the rocket. In addition, issues of deploying anti-ship missiles on different platforms will be addressed.

Obviously, all these processes will have a positive impact on the development of the surface and coastal forces of the Vietnamese fleet, and will also help strengthen the defense of the coast. However, all this will require some effort and time. Probably, faster rearmament could be carried out with the help of additional purchases of Russian Kh-35E missiles in different versions. But the Vietnamese leadership decided to support their own industry. Time will tell if this was the right decision.