17 September 1941 of the year a government telegram came to the director and chief engineer of Uralmashzavod:
“I ask you to honestly and on time fulfill orders for the supply of cases for tank HF Chelyabinsk Tractor Plant. Now I ask and hope that you will fulfill your duty to your homeland. In a few days, if you find yourself violating your duty to your homeland, I will begin to smash you as criminals who neglect the honor and interests of their homeland. You can not tolerate that our troops suffered at the front from a lack of tanks, and you in the far rear were chilling and lounging.
I. STALIN. 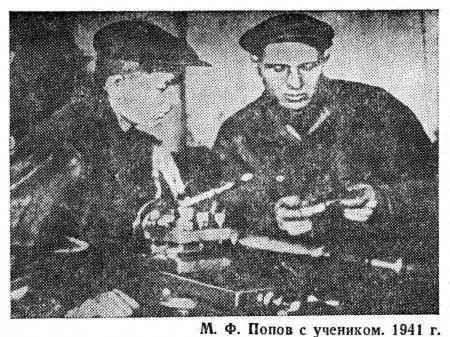 Deputy Chairman of the Council of People's Commissars Vyacheslav Aleksandrovich Malyshev, a lobasty man of average height in a paramilitary protective clothing color, walks firmly, in a businesslike manner, through the office of the director of the Uralmashzavod. A week ago, he was appointed the first Commissar of the tank industry. The new Commissariat was subordinated to Uralmashzavod.

—I arrived on the instructions of Comrade Stalin. You know his opinion about the affairs at your factory from the telegram. The situation at the front is heavy. Red Army has to retreat. Like air, she needs tanks. The enemies have more than a few times. And you are disrupting the delivery schedule of armored corpses and towers to the Chelyabinsk plant. - Malyshev was silent, looked around the shop foremen with a stern attentive look: - Any concrete suggestions?

“I know. Will be! More ... Do not have time? Not ready? - He looked at his watch, - In two hours and thirty minutes I am waiting for you for a business conversation. Everybody's Free. Popov, stay.

—I know that you are leading the way and by your example you carry away the workers. I know that in twelve hours you process the hull. It's good! Very good. But for peacetime, for yesterday! Today life dictates other terms. Seven-eight hours! Here is a new rule, a new task.
“I haven't misheard it? - thought Michael. - Is it possible? After all, everything is squeezed out of the machine. ”

“I cannot promise, Comrade Commissar,” he finally decided. “But I will try.” I will do my best.

—It is necessary, comrade Popov, for your site to double the output of armored hulls. Otherwise it is impossible. Think how to do it. Get some rest, post. And now you sing.

It was as if not him, but someone else whom Mikhail was watching from the side, with coupons put in his hand by the assistant director, slowly went down the stairs to the dining room. He ate without appetite, mechanically. All the time there was a boring machine before my eyes, relentless questions were beating: “Why five? Why exactly for five hours did the people's commissar demand to reduce the processing time? After all, he did not invent them. Somewhere, probably, they are already working on such standards? And if there are norms, then there are ways to fulfill them. So, something overlooked, did not think? ”.

Coming out of the plant, Michael turned to the entrance, but stopped at the factory square. Why rush? Konyakhin and the Fighters are already at home. He is alone. It is necessary to think everything over again, outline something before returning to the workshop. He sat down on a bench near the flowerbed.

This was already in September - October 1941, when Uralmashzavod was urgently rebuilt from individual to mass production, from the production of peaceful crushers, excavators, rolling mills - to the manufacture of hulls and towers of heavy KV tanks. Not enough boring machines. And the Komsomol member Mikhail Popov with his brigade accomplished the feat of labor, and then became the initiators of the all-Union competition of front-line Komsomol youth brigades.

... Michael was born far from the Urals in a small village Maklaki, Kaluga region, in a large peasant family. Father pulled out of the last. The same fate awaited Michael, but the October Revolution broke out. Went to a rural primary school. The teacher, meeting her father, advised to teach her son further.

“I don’t know how to be.” There are no shoes here.

However, when it was time to study in high school, I called my son to the hut.

“Well, try it on,” he pulled out a sackcloth from a shelf, unrolled it and set a couple of new, tar-smelling boots on the floor in front of the lad. This is nothing made out of growth. Now you will probably cover up a footcloth, and in a year they will be very accurate. This is for the whole school. Don't wait anymore.

In the seventh grade, they were taken, boys and girls, on a tour of the engineering plant. Michael hit the machine shop. Unseen machines easily, like peel from potatoes, removed chips from iron blanks, sawed, planed them, turned them into Details of future locomobiles ... But Michael finished off with the fact that behind one of the machines was a girl who last year finished seven years. "Wow! .. So, and he can ?!"
After the seventh grade entered the courses at the plant. Mother grumbled, taking smeared overalls:

- Again, izbyalsya all! Are you angry with your stomachs on the floor, or what? Just washed - and nakos you again gryaznehonka!
Michael was guiltily silent. He could not admit that he deliberately collected oil from the machine and rubbed it on special clothes. I really wanted to be like a real worker.

The dream has come true. Thirst quenching began. Mastered the processing of all parts, joined the Komsomol.

Once arrived at the factory machine machine already from England itself. He was entrusted to Michael. And he did not disappoint. Quickly mastered the unit, did not lag behind the changers, skilled workers of the seventh category. Even my uncle shook hands and said: “Hello, Mikhail Fedorovich!”, Which made the guy very embarrassed.
In the fourth year of work, he participated in the creation of a powerful, five hundred horsepower locomobile. He and his partners were instructed to bore the cylinder - the most important part of the machine. Completed the task earlier and with excellent quality. Mikhail was awarded the prize - a woolen suit.

At the same time, together with his comrades, he wrote a letter with a request to send to the Urals, for a long time there was no answer ... But he was invited to the district committee and handed over the vouchers of the People's Commissariat of Industry to Sverdlovsk, to the Uralmashzavod, which is known throughout the country.
All turned the war.

... Michael rose from the bench, went to the shop. Something he has already invented. You can reduce the time of installation and fixing of the armored case on the machine. True, it is necessary to think it over again and estimate it on the spot, to see how others are doing. The flying caliper doesn’t give rest, with which external flanges are cut. Heavy, at two hundred kilograms, it has to be installed twice and removed as much. One and a half to two hours each time waiting for a crane. And the trimming itself takes four hours. For a long time this caliper is haunted. Even in a dream, she dreams: she stands in the way, like a bull, and not in any way. Slowly chews chips and spits out, chews and spits out ...

It is necessary to poke and over the incisors. Increase cutting speed ... This seems to be the main direction. Why abandoned normal cutting tools? Need to ask the technologists.

So the time passed almost until the morning. I watched as they removed the finished unit and put a new one on the machine, then went to the corner of the shop where the old and just arrived incomplete machines stood ...

And in the morning, at the beginning of the shift, he said to the assistants:
- Guys, yesterday Commissar Malyshev gave us a combat mission: to process the corps in seven hours. Consider that we are at the front. We have two or three days. Something I came up with. Ida to the machine.

And now the senior master spotted the start time of the experiment. Along the span, warning bridge beaters with a multi-ton load on the ropes moved by striking the bells of the gape. Here is an armored hull hovering above the machine. There was not a single hit between the operations. Mikhail Popov, Nikolai Konyakhin, Mikhail Bortsov seemed to have merged with the working units, keenly catching any change in the operation of electric motors. The voltage grew by the hour. Finally, the incisors made the last turn. Michael turned off the machine.

“Six hours and thirty minutes,” said the senior master. “Congratulations! Well done!
-It's too early. Success could be random. How not to disgrace.
“Take the next one?”
-Of course! Got ready?
- The last seams impose. 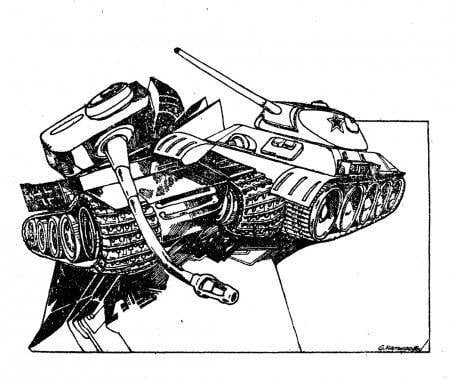 The whole workshop worked on the experiment, and sometimes worked out of its last strength. Michael knew it.
Once he walked around the shop and suddenly, like a shock, hit: a teenager was lying on the floor, next to the working machine. Ran up. Pale face, eyes closed. Crouched to the chest: the heart beats slightly audible. He lifted a light, almost weightless body, his head was thrown back helplessly, a thin thin neck was visible. A cotton swab dipped in liquid ammonia rubbed the kid's whiskey for a long time. They brought it to his nose. Finally, the eyelids slowly opened. It turned out hungry faint. For the whole week, he didn’t even have a crumb of bread in his mouth. He sold his bread card at the beginning of the month and bought sweets on the market. The part was immediately eaten, and the rest was dragged out of the nightstand.

Mikhail spoke about what happened at the meetings of the Komsomol bureau. It turned out that other teenagers are doing the same. I had to take them for lunch almost by the hand. Accustomed to independent living.

The adults were also starving. Grain rations and liquid soup was not enough to restore the expended strength.

Among the Uralmash workers, people who had private houses with gardens were in a more or less tolerable position. And such as Mikhail, who lived in factory apartments, bought potatoes on the market for three hundred rubles for a bucket or exchanged them for the remaining things.

Mikhail saw how many women in the dining room ate only soup, and the second was put in jars and carried home to children.

In the spring, taught by bitter experience, the Uralmash workers will start mass gardening, create teams of hunters and fishermen, come up with and assemble installations for making vitamin yeast, start cooking coniferous drink. But all this will be later ...

In the meantime, there was a long, hungry winter of forty-one.