Atlantropa and Stalin's idea to drain the Caspian

This is what the Mediterranean would look like now if Sörgel had carried out his plan.

Time for a change

The turbulent 50th century was simply full of attempts to conquer nature. In the Soviet Union in the 60s and XNUMXs they planned close the Bering Straitwishing to moderate the climate in the Arctic. According to contemporaries, a dam pumping cold water into the Pacific Ocean would eventually send Japan and the Soviet Primorye into a new ice age. At the same time, the situation with frosts in Yakutia would not change much.

There were also more sensible ideas. For instance, dig a tunnel to Sakhalin, thereby ensuring uninterrupted traffic of goods and passengers to and from the island. The idea, which belonged to Stalin, has already begun to be implemented, but in 1953 it was abandoned due to the death of the leader of the peoples.

But one should not think that the ideas of megaprojects capable of reshaping not only the landscape, but changing the climate on the continent, were inherent only in the Soviet system. In 1928, the German architect and part-time racist Hermann Sörgel proposed a unique project for the partial drainage of the Mediterranean Sea.

The Germans generally had special plans for Africa. In theory, two man-made seas were supposed to appear on the continent - in the area of ​​\u100b\u200bLake Chad and the Congo River. One of Sörgel's many projects also included a hydroelectric dam between Sicily and Tunisia, linking Europe and Africa into the single continent of Atlantropa. If the influx of water into the Mediterranean Sea through hydroelectric power plants is strictly dosed, the German architect believed, the water level in just a few years will drop by XNUMX-XNUMX meters only from natural evaporation.

In fact, along the line Tunisia - Sicily - Italy, a land crossing is formed, dividing the sea into two parts. And two mega-dams in Gibraltar and the Dardanelles would simply flood Europe with cheap electricity. Water receding for tens of kilometers from European shores will expose lands larger than France in area. According to the architect, at least 660 thousand square meters. kilometers of seabed would be suitable for life and agricultural development.

Sörgel, in order to promote his vision of a new European world, in 1929 even published a little book called "Lowering the Mediterranean Sea, Irrigating the Sahara: the Panrop Project." The grandiose plan quickly found its admirers, and a team of like-minded people quickly gathered around the architect. They created the profile institute of Atlantropa, which happily existed until 1960. 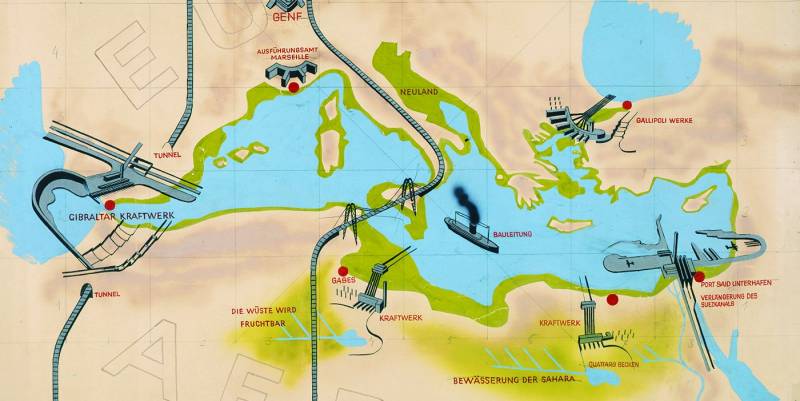 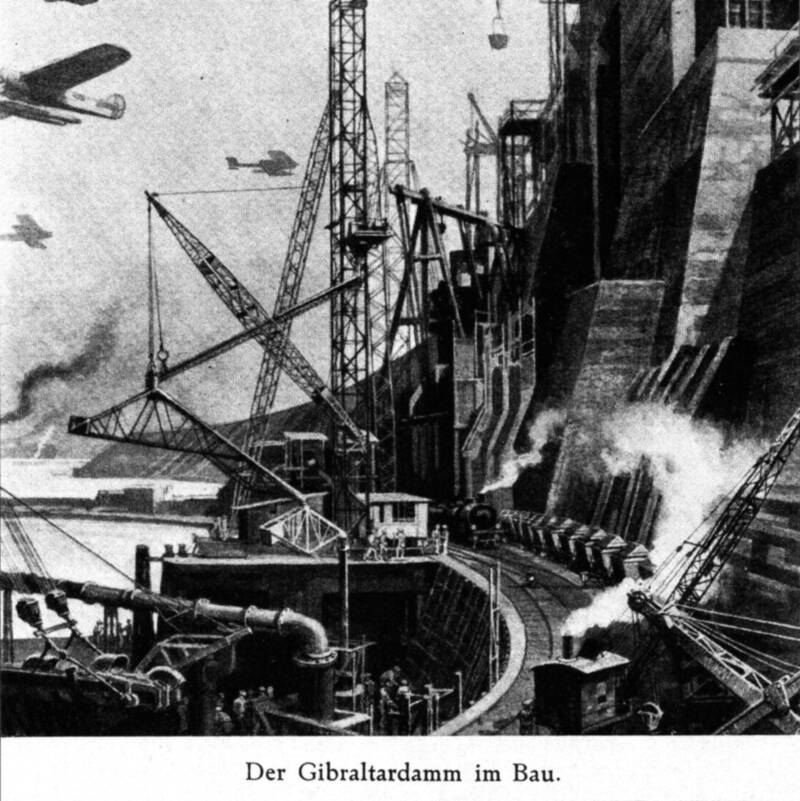 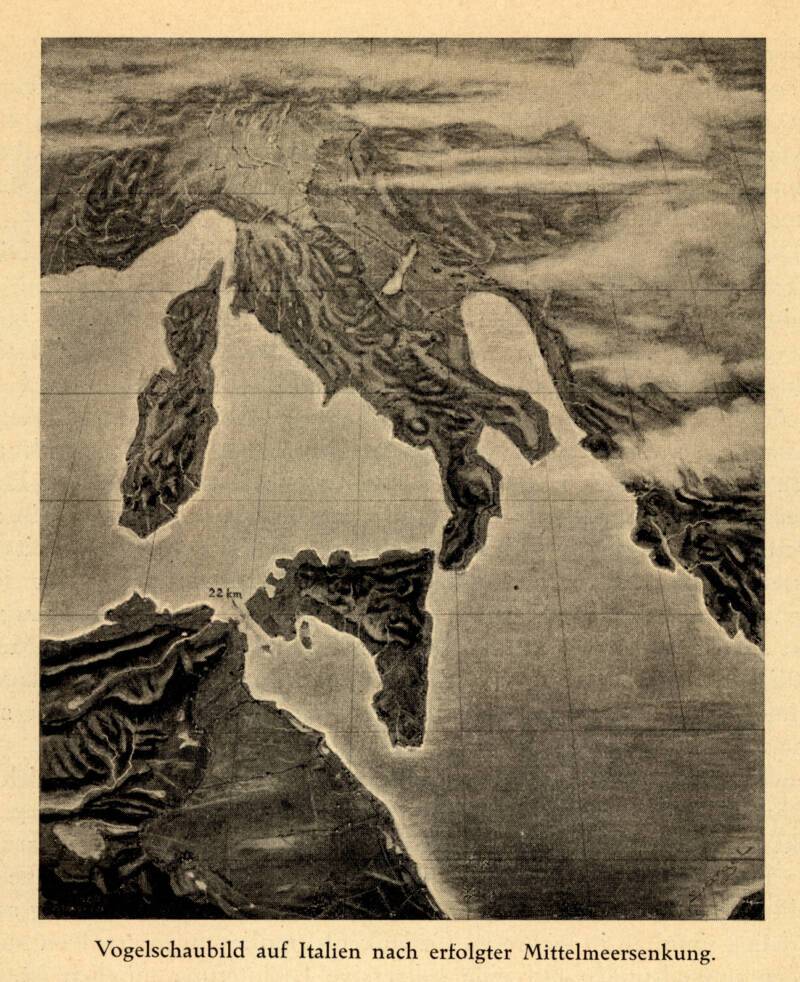 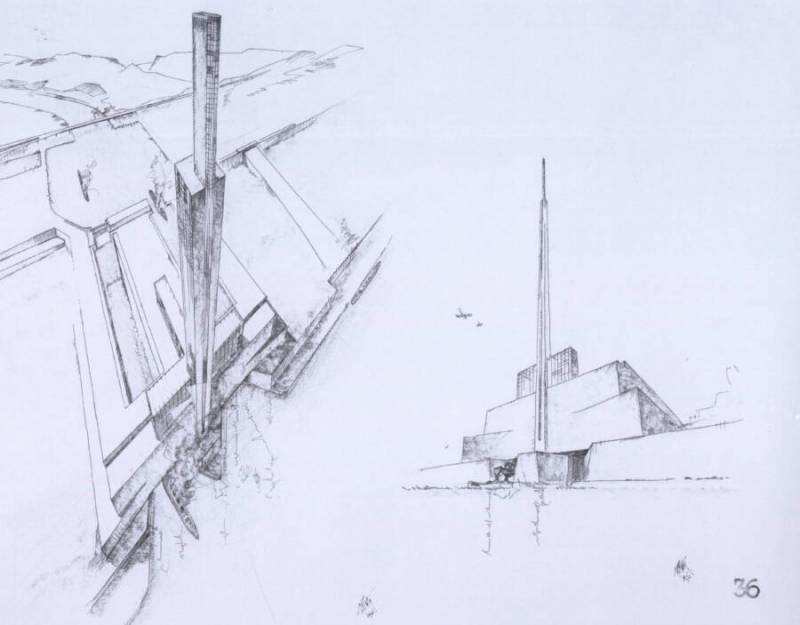 First, mega-construction will require hundreds of thousands of workers, and this will solve the problem of unemployment on the continent.

Secondly, cascades of hydroelectric power plants in the Straits and in Africa were supposed to generate several hundred GW of electricity, which would push European industry into a bright technological future. Jokes aside, but now in Europe they wouldn’t worry so much about half-empty gas storages - it would be possible to heat the dwellings from gratuitous electricity.

Thirdly, new territories freed from sea water would provide "living space" in such a cramped Europe. In particular, many sympathizers of the architect planned to resettle local Jews to new lands, or even expel them along the formed land isthmus to Africa.

And finally, fourthly, Sörgel quite consciously tried to redirect the fervor of the emerging Nazism to the African continent. In some writings, he openly flirted with the Nazi ambitions of the German elite. 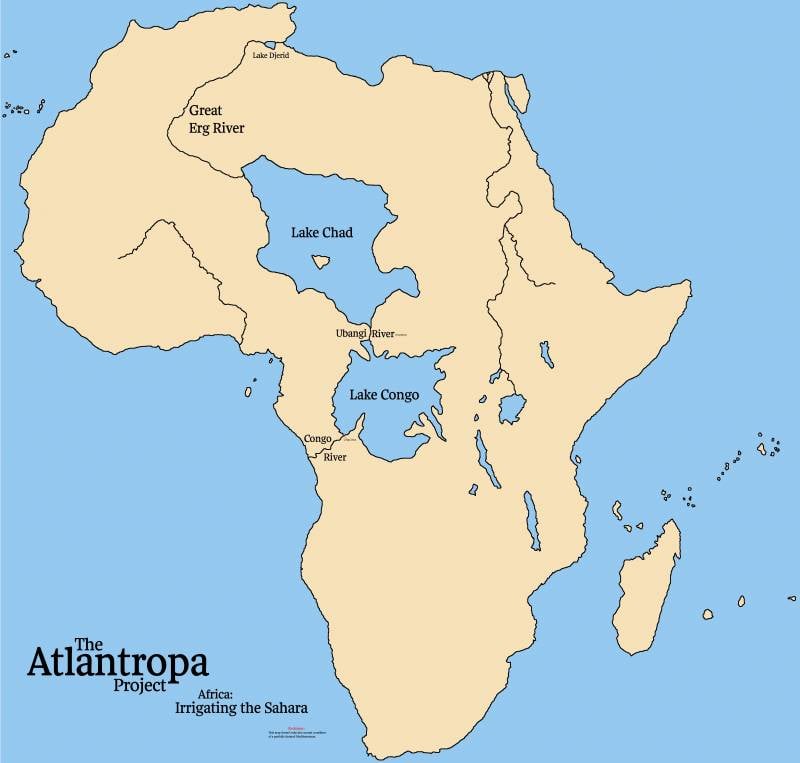 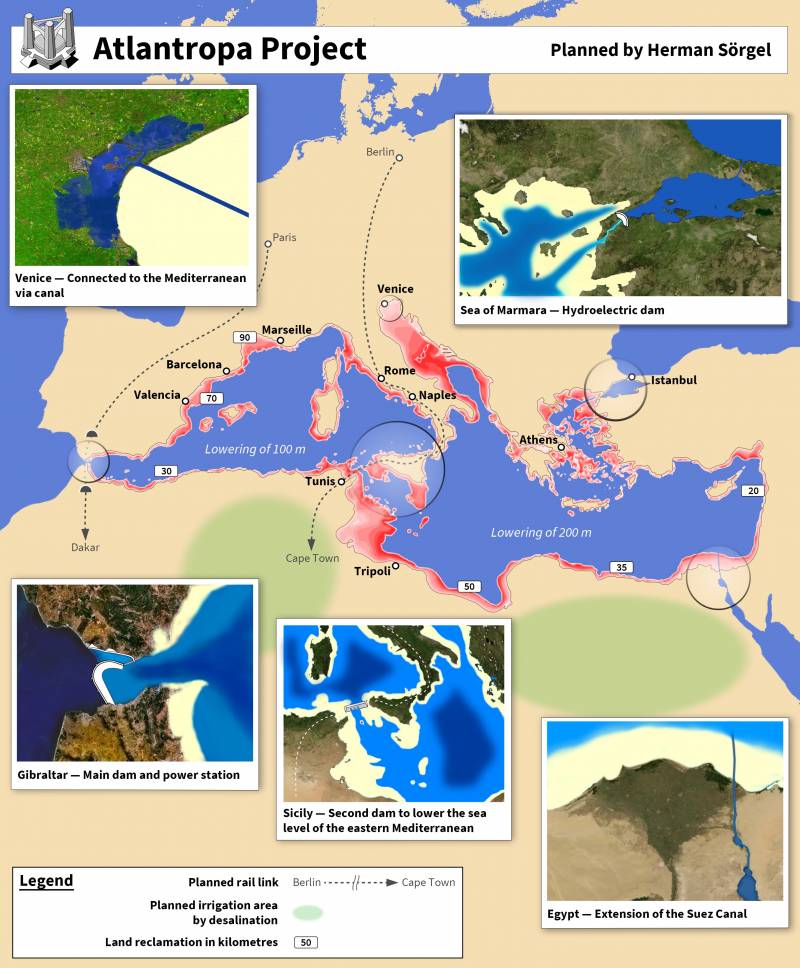 In Africa itself, a real European paradise was to form in a few decades. Two giant seas will seriously soften the climate of the continent, put an end to droughts and famines, and also ensure the rapid transit of goods.

It should be understood that in an effort to turn Africa into a blooming garden, Sörgel by the 30s of the last century was far from being a pioneer. In 1912, a certain French scientist Esheguayen proposed to dig a canal from the Mediterranean Sea to fill the Sahara desert with water. The driest part of Africa is located below sea level, so it is theoretically easy to do this, the Frenchman believed. Moreover, the rocks adjacent to the desert are loose and easily mined. In total, at least 35 billion tons of sea water should have come to the Sahara, which would radically change the climate of the north of the continent.

By the way, quite a good idea for the current fighters against global warming and the subsequent rise in sea levels. Why not take advantage of Professor Esheguayen's project and dig a channel into the Sahara in order to at least slightly reduce the pressure of the oceans on the islands? So Sörgel, apparently impressed by the French canals that needed to be “digged without shelving,” decided to change the climate of Africa.

Just don't think about the population.

For the inhabitants of Africa, the implementation of German architectural megaprojects threatened, if not with genocide, then with a large-scale disaster. Several million people would either be driven out of their places of residence, or simply flooded with the waters of dammed rivers. Sörgel, as a true racist of his time, saw in this only positive aspects of the liberation of living space for the white race of masters.

By all indications, Hitler should have liked the idea of ​​Atlantrope, but he was already aiming east, and the conquest of Africa in such a titanic complex way did not interest him at all. 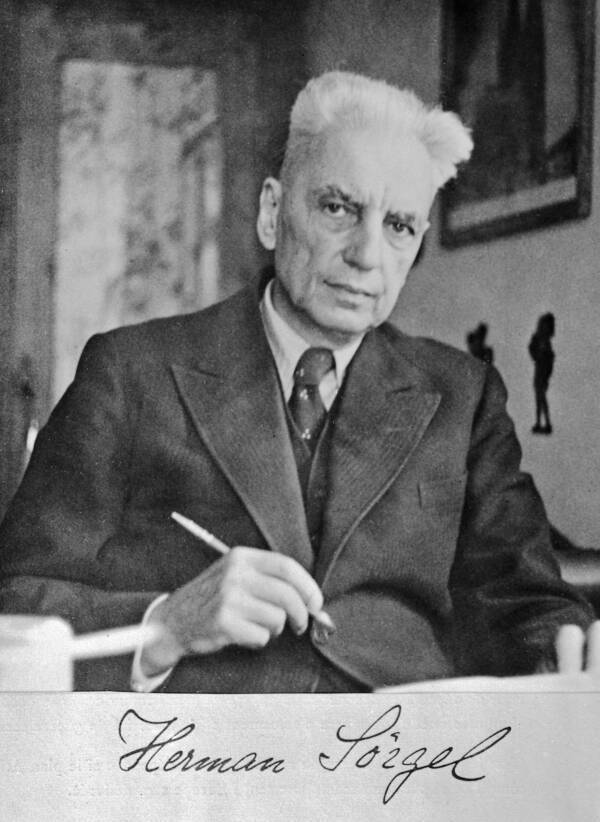 Herman Sörgel did not leave the thought of implementing the Atlantropa project until the end of his days.
Mussolini was also against it, rightly fearing for the Italian coast. The entire port infrastructure and resort centers would have ended up in the depths of the country in a few years. It's scary to think what the Italian pearl Venice would have turned into. Despite the support of a number of European leaders, Sörgel did not manage to get his project off the ground. However, until his death in December 1952, Hermann Sörgel did not give up hope for the practical implementation of the concept of Atlantropa. 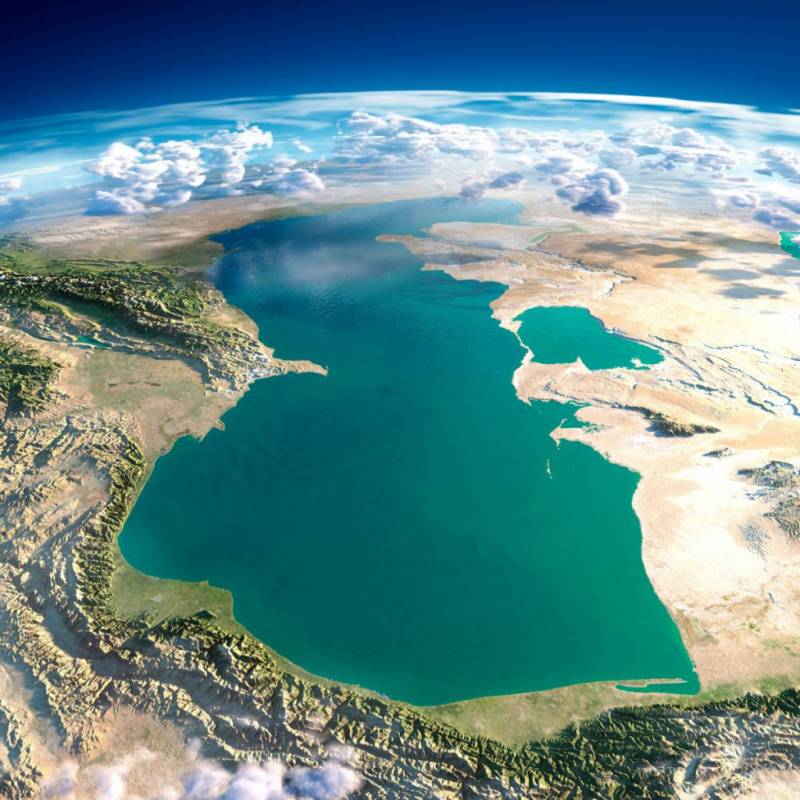 The oil-rich Caspian Sea. Source: lotosgtrk.ru
In the history of the unfulfilled merger of Europe and Africa into one continent, one cannot ignore the idea of ​​Joseph Stalin to drain the Caspian Sea. Only the plans of the leader of the peoples had nothing to do with the redrawing of the world map. But first things first.

In 1952, Stalin instructed the head of the Hydroproject, Sergei Zhuk, to develop a plan to divert water from the Caspian. The main goal is to simplify and accelerate the extraction of oil from the depths covered with sea water. The country after the Great Patriotic War was intensively recovering, the Cold War was going on, and the reduction in the cost of oil production was strategically important. Stalin gave the head of the Hydroproject only two weeks to develop a detailed plan for diverting the Volga from the Caspian to the Kazakh steppes and damming the Kura River in Azerbaijan.

In total, in order to expose the bottom of the sea, it was necessary to divert the channels of hundreds more rivers, which annually contributed at least 290 cubic kilometers of fresh water. Naturally, in any case, this would have caused flooding of the gigantic territories of the USSR, many of which were densely populated and involved in agriculture.

According to the calculations of the Hydroproject, the diversion of the Volga alone would require about 10 billion rubles and 4–5 years of work. At the same time, even the complete isolation of the Caspian Sea from fresh waters did not guarantee its drainage - the vast territory of the sea would inevitably collect natural precipitation. For the final transformation of the sea into a dry valley, they planned to simply pump out water for 16-17 years.

In general, the duration of the project and its extraordinary cost stopped Stalin in time from practical implementation. It was decided to extract oil from offshore platforms, especially since such technologies already existed in the USSR since 1949.

About what consequences could expect the inhabitants of Europe and the Caspian region, in the event of the implementation of the described crazy projects, one can ask the witnesses of the tragedy of the Aral Sea - the largest environmental disaster of the XNUMXth century.