Urgently write out a "Polish" prescription

The notorious Lech Walesa recently urged not to "stand on ceremony" with Russia if it, they say, invades Ukraine. Poland itself "should do everything, including the recruitment of volunteers, in the event of a Russian attack on Ukraine." He admitted that he used to support Vladimir Putin, but now he advocates a blow to Russia during its aggression against Ukraine.

However, in December 1981 and later, Pan Walesa - the leader of the equally notorious Solidarity, the trade union boss, who had grown to the position of president of the country - was much more accurate in his statements. Probably because he was seriously afraid of harsher repressions under the martial law introduced at that time in Poland. 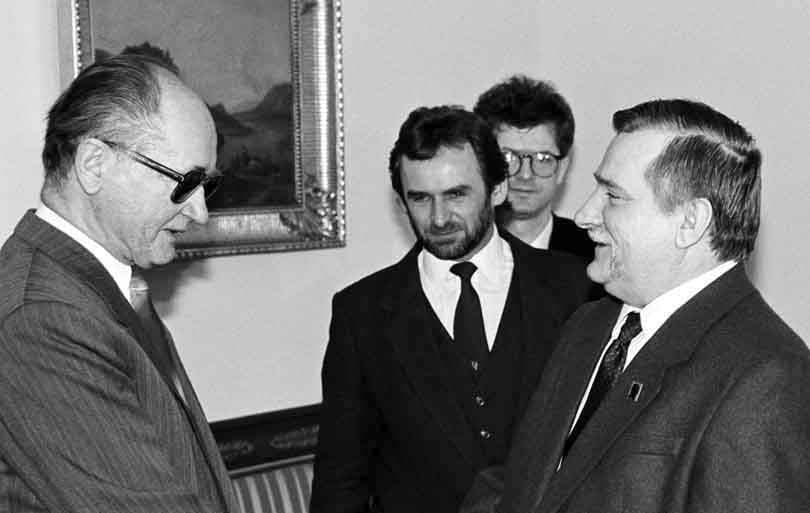 Photo: polskainfo2.tripod.com
But, one might say, the half-hearted reaction of the pro-Soviet socialist countries to those events also played into the hands of Walesa. Therefore, he was only interned, and on November 14, 1982 he was released ...

Better Stasik Kanya than Vanya on the tank

Therefore, the meeting of the pro-Soviet socialist countries on the development of the situation in Poland, proposed by the Central Committee of the CPSU on February 12, 1982, did not receive a clear consent from them. In the figurative expression of Janos Kadar, "our support for martial law in Poland need not be aggravated by the intervention of the Warsaw Pact."

Long before a serious aggravation in socialist Poland, on December 5, 1980, a meeting of leading figures of the countries participating in the Warsaw Pact was held in Moscow. The Polish question was discussed. The leaders of the socialist countries, in fact, even then spoke in favor of his "prompt decision", but ...

The main communists of Czechoslovakia and Hungary, Gustav Husak and Janos Kadar, limited themselves to noting the positive experience of military cooperation with the USSR in resolving similar crises in their countries. Almost the same after a pause repeated the Bulgarian Todor Zhivkov. A similar, rather streamlined opinion was expressed by the leader of the GDR, Erich Honecker.

And none of them expressed unequivocal support for the possible entry of VD troops into Poland - “operational” does not mean “cardinal”. Conductor Nicolae Ceausescu - almost the dictator of Romania - immediately spoke in favor of "strengthening the sovereignty of friendly Poland" and unequivocally against "friendly, but still foreign interference" in Polish events.

In his opinion, this will demonstrate "the incompetence of the leadership of the PPR, will show its dependence on external military support." A position similar to the Romanian one was expressed by the then head of the PZPR, Stanislav Kanya, although he noted the "relevance of the assistance of the Warsaw Pact in case of development of resistance" to the Polish leadership.

According to the now forgotten leader of the Polish communists, the intervention of the Warsaw Pact would have been possible before martial law in Poland, but “after this decision of Jaruzelski, the impression will be that the omnipotence of the Polish army is strengthened by the occupation of the country.”

At the same time, Kanya, in unison with the position of the Romanian conductor, quoted a Russian proverb that was then popular in Poland: “Better Stasik Kanya than tank Vania".

Ceausescu and Kanya offered to consult with the former head of the PZPR (in 1956-1970) Vladislav Gomulka on the solution of the internal situation in Poland, but the Soviet side rejected this idea. Apparently, fearing the return of Khrushchev's protégé from disgrace.

Although it was Gomulka in 1956, when Hungary was also “burning”, who was able to resolve a similar Polish crisis. Then Gomulka managed to achieve the unthinkable - the withdrawal of additional Soviet troops from Poland in a matter of days after their entry into Poland.

In the meantime, by decision of the Politburo of the Central Committee of the CPSU of November 27, 1980, the USSR almost doubled in 1981-1982. total deliveries of oil and oil products to Poland, moreover, up to a third - actually free of charge, and the rest - by barter. This was done by reducing the same deliveries to the GDR, Hungary, Czechoslovakia and Bulgaria by 15-20%. At the same time, Romania also increased oil supplies to Poland by a third.

In October 1981, the soft Stanisław Kanya was replaced by the hard General Wojciech Jaruzelski. And the USSR and the pro-Soviet socialist countries in 1980 and later did not officially speak about the possibility of joint military support for Polish socialism. Most likely, the Soviet military participation since the end of 1979 in Afghanistan also had an effect, to which it was literally not easy to “add” Poland.

Soviet newspapers “regularly quoted Rude Pravo” and Gustav Husak. "Izvestia" in December 1981 - the first decade of January 1982 posted seven responses from Czechoslovakia to the Polish events. Vietnam, Bulgaria and the GDR were noted in the Soviet media with only three responses.

Romanians were not asked

On the other hand, the Romanian Ceausescu seriously intended to provide "separate" assistance to the Polish authorities... strengthening the socialist foundations in the economy, the social environment, in the spheres of culture and the media.

At the same time, it was supposed to isolate anti-socialist elements and severe restrictions on the entry of tourists from capitalist countries. Ceausescu also offered to send Romanian advisers to the PPR to assist in solving such problems. In Warsaw, they did not respond to these proposals - most likely, on advice from Moscow.

Nevertheless, at negotiations with K. Chernenko in Moscow already in 1984, Ceausescu proposed to the Warsaw Pact countries to work out comprehensive long-term measures to strengthen socialism in Poland, but without the introduction of troops of the Interior Ministry there. The Soviet side did not respond to this initiative.

In the same year, at a meeting with the leaders of the pro-Soviet and "Stalin-pro-Albanian" communist parties in Germany (see. German communists against Gorbachev) in Bucharest, the conductor said that Moscow was "going on about" the development of the domestic situation in Poland and was not inclined to deal closely with the Polish issue. Which is fraught with its "export" to other socialist countries.

Korea is concerned, but China is silent

The leadership of the DPRK expressed its concern about the situation in Poland during the visit of Kim Il Sung to Warsaw in the same 1984. It was stated that in Poland they were late in isolating the anti-communist opposition and committed “pro-Western” internal political mistakes by the beginning of the 80s. Therefore, it is urgently required to strengthen the viability of the socialist government. Including in the field of culture and propaganda.

But it seemed to be too late...

Chinese policy towards the "pro-Soviet revisionist countries" (as they were called since 1960 in Beijing) has changed dramatically since 1982: Beijing almost stopped criticizing "pro-Soviet revisionism", initiating the rapid development of interstate relations with these countries, from the mid-80s - and from USSR (and with Yugoslavia - since 1977!).

At the same time, Beijing abandoned its attempts to “replace” the USSR in the same region. Therefore, almost all events and trends in those countries were commented in the PRC only for information. Beijing did not comment on the situation in the PPR in any way, even during W. Jaruzelski's visit to Beijing in 1986.

On the other hand, the head of the PPR himself criticized the already established Chinese-American alliance at the same time. Jaruzelski is known to have asked Deng Xiaoping:

Cuba is with us, but Albania is irreconcilable


But the leadership of Cuba expressed official support for martial law in Poland. This position was due to the "paramilitary" situation in Cuba itself under the long-term, since 1960, US blockade.

Unbridled criticism of Jaruzelski's policy and the role of the USSR in the internal Polish situation was spread by the leadership of Albania. Tirana officially announced that the introduction of martial law in Poland was a deliberate step by Warsaw and Moscow to stimulate the pro-Western opposition for the subsequent liquidation of the PPR and PUWP. The policy of "growing Polish borrowings from the West with deliberate connivance on the part of Soviet revisionists and Beijing double-dealers" was also criticized.

Similar assessments were made by Kazimierz Miyal (see https://topwar.ru/170117-kommunisty-vostochnoj-evropy-oni-ne-stali-strannymi-sojuznikami.html), head of the illegal Stalinist-Maoist Communist Party of Poland (existed in 1965-1996 , restored in 2002). He advocated the creation of armed communist brigades from workers - members of the PZPR, in order to suppress or at least block the centers of Solidarity and its adherents together with the Polish troops and special services.

Subsequently, K. Miyal complained that since 1956 - since the death of the head of the PUWP B. Bierut - this "more and more Khrushchevite party abandoned ideological work among the working class", so his proposal for such brigades did not find a response in the country.

The pro-Soviet socialist countries were in no way able and, most likely, did not want to influence the development of the situation in the PPR after the introduction of martial law there. They were simply afraid of the “export” of the Polish events of 1980-1981, which, in fact, happened just seven years later ...