Acoustic non-lethal weapons: for the protection of objects and for other tasks 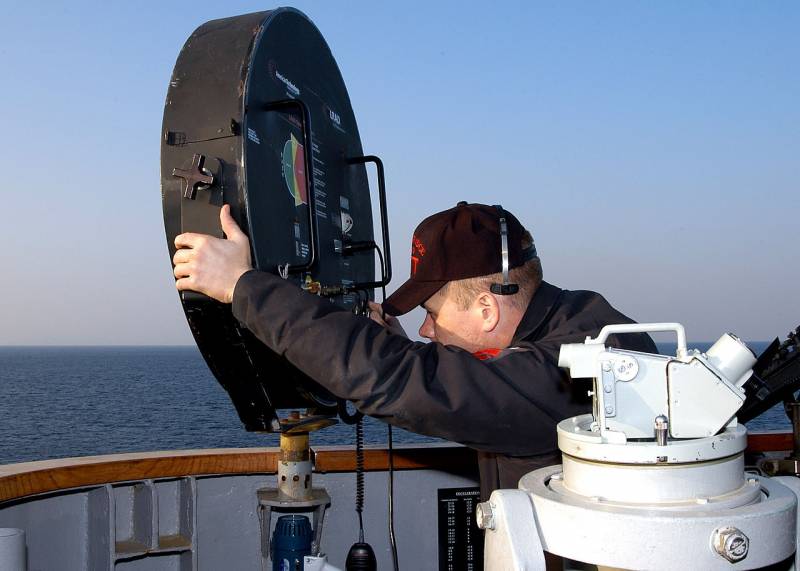 LRAD system on a ship. Photo by the US Department of Defense

One of the promising and promising areas in the field of non-lethal weapons are systems that act on the target with directional sound signals. Non-lethal acoustic weapons can be used to solve a wide range of combat and auxiliary tasks. At the same time, the best results can be achieved in the field of protection of objects and prevention of attacks.

The topic of non-lethal acoustic weapons is regularly raised in various publications. Thus, in the January issue of the magazine of the Ministry of Defense "Military Thought" an article was published "Use of non-lethal weapons in the interests of protecting objects from unauthorized entry." It discusses various ways of influencing manpower in the context of perimeter protection, incl. acoustic.

The authors of the article believe that acoustic weapons are one of the most effective means of non-lethal action in the context of protecting objects. An alternative or addition to it is called systems that use electric current or emitters of electromagnetic waves of extremely high frequency (EHF).

The best working and "combat" characteristics are demonstrated by acoustic systems using the upper part of the audible range - from 16 to 20 kHz. Loud sound at such frequencies excessively affects the eardrum, which leads to displacement of the elements of the middle ear and pain. Pain sensations occur in a healthy person with noise intensity of 130-140 dB. Experiments show that sound up to 130 dB for a duration of up to 10 s does not lead to irreversible damage to the hearing organs and is generally safe. 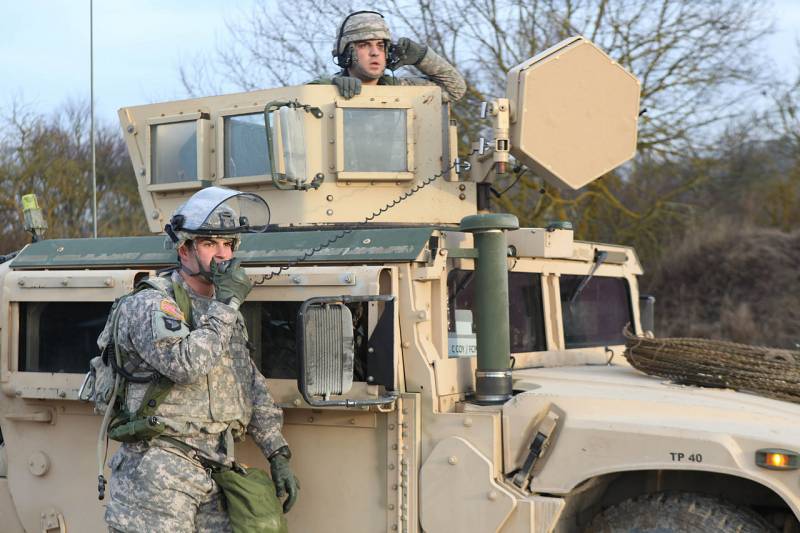 Another version of the LRAD. Photo by the US Department of Defense
The authors of "Military Thought" write about the need for further development of hydroacoustic non-lethal weapons. Such systems, suitable for protecting water areas from manpower, have their own characteristics. So, in the aquatic environment, acoustic radiation can cause a whole range of negative sensations. Anxiety, weakness, as well as general discomfort and depression are added to the pains of the hearing organs.

Depending on the current conditions and tasks, acoustic systems can be used independently or together with other non-lethal weapons of any type. So, when holding back a crowd that does not show pronounced aggression, "Military Thought" allows the use of acoustic weapons. At the same time, to suppress disturbances, EHF systems should be used, which give a faster and more pronounced effect.

A promising concept, as expected, did not go unnoticed by engineers and operators. The first samples of acoustic weapons suitable for practical use were created at the beginning of the XNUMXs. Soon it became known about the purchase of such devices by various structures, as well as about their intended use.

The most famous over the past two decades was the American device LRAD (Long-Range Acoustic Device). It is a portable system that includes a radiator-speaker, a controlled acoustic signal generator and an amplifier. Such a device can be used as a loudspeaker to send messages, as well as solve full-fledged combat missions.

The LRAD product can produce sound signals over a wide range of frequencies with the required loudness in a sector up to 30° wide. The range of action and the effect on the biological object depend on the selected operating parameters. It is possible to work on individual goals or in groups with equal efficiency. 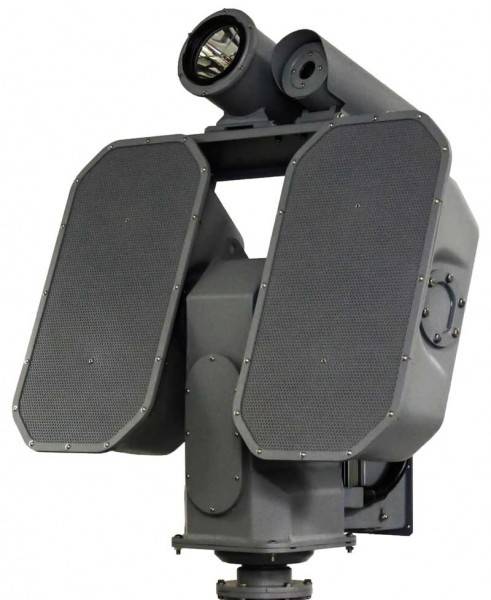 Stationary version of the Sirin system. Photo of the company-developer "Roniks"
LRAD consists of supplying a number of army and police structures in the United States and other countries. Such products have been repeatedly used to disperse crowds and suppress riots. In addition, they were used by ship crews to fight pirates. In all cases, sufficient efficiency was demonstrated. It should be noted that the suppression of unrest and the protection of navigation fully correspond to the range of tasks considered by the Military Thought.

Similar systems are being created in our country. So, in 2017, a “sonic gun” called “Sirin” was introduced. It was made in the form of a remotely controlled module for placement on a machine tool or a self-propelled platform. Two sound emitters and optics were placed on a rotary and swinging base to search for targets.

It was reported that the signals of the Sirin product in loudspeaker mode are heard at a distance of up to 5 km. Acoustic non-lethal suppression is provided within a radius of 560 m; sound pressure - up to 152 dB. Subsequently, new samples with different characteristics were developed, and now we are talking about the whole Sirin family.

Hydroacoustic means for the protection of water areas are also being developed. So, a few years ago, the Zeus active protection system was introduced. Its main element is a submersible cylindrical module that generates powerful acoustic impulses.

A module weighing 130 kg is capable of operating at depths of up to 10 m and affecting targets within a radius of 100 m. The acoustic pulse has a negative effect on the hearing organs and hollow organs. At the same time, at short distances, up to meters, severe damage to the body and death is possible. 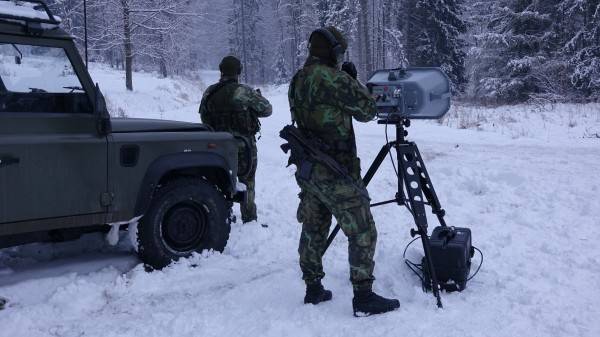 Another version of the Sirin system is in position. Photo "Roniks"
Also in the context of non-lethal acoustic weapons, one should recall the recent history with Havana syndrome. Russia was suspected and accused of using some secret devices, possibly acoustic weapons. However, no evidence has emerged, and it has recently emerged that almost all of the complaints of American personnel were caused by various natural factors, but not by hostile activities.

In theory and practice

In general, non-lethal acoustic weapons are of particular interest from a technical and practical point of view. Such systems have a number of important features and advantages that help him find a place in the armies and law enforcement agencies. Demand for existing systems stimulates the development of new designs, which contributes to the further development of the concept, the emergence of new functions, etc.

One of the main advantages of acoustic weapons is their relative simplicity. A system of this class, designed for operation on land, can be built on the basis of available components with sufficient characteristics. Hydroacoustic systems are more complex, but there are no fundamental difficulties.

Acoustic weapons are flexible in use. Given the current conditions and challenges, the operator can choose the optimal operating mode and signal parameters. This ensures equally high efficiency over the entire parameter range. In addition, emitters can be used not only to influence the target, but also as simple loudspeakers. 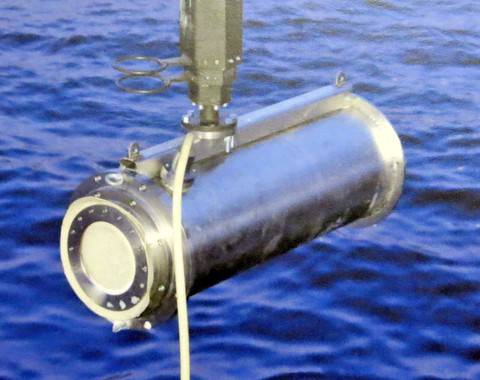 Submersible module "Zeus". Photo Interpolitex.ru
An important advantage of acoustic weapons is the minimal negative impact on living targets and the environment - subject to all safety measures. Damage and destruction of infrastructure or surrounding objects is virtually excluded. In this regard, acoustic means are more convenient and safer than kinetic or electromagnetic ones.

However, there are also significant drawbacks. The negative impact of acoustic weapons can be reduced by fairly simple and common means of protection. In addition, even loud sounds are shielded and reflected by various objects. In certain situations, it even poses a potential threat to operators.

All these shortcomings can reduce the real effectiveness of acoustic weapons. To reduce their negative impact, it is necessary to correctly approach the use of such systems. In addition, acoustic weapons should be supplemented with non-lethal weapons of other classes. Several different samples will be able to complement each other without leaving weak spots in the defense.

Thus, non-lethal acoustic weapons have a number of advantages and are therefore of interest to various structures. When used correctly, alone or with other systems, it allows you to solve various problems with little or no collateral damage and long-term negative consequences. The main scope of its application should be considered the protection of various objects, territories and equipment.

Interest in this topic has led to a number of different speaker designs on the market. In addition, the topic of such weapons is regularly raised in various publications, incl. in serious military-scientific publications. It can be assumed that in the future these trends will continue, and the direction of acoustic weapons will develop. This will lead to the emergence of new samples that will go into service with various structures and will help in protecting objects, areas or water areas.