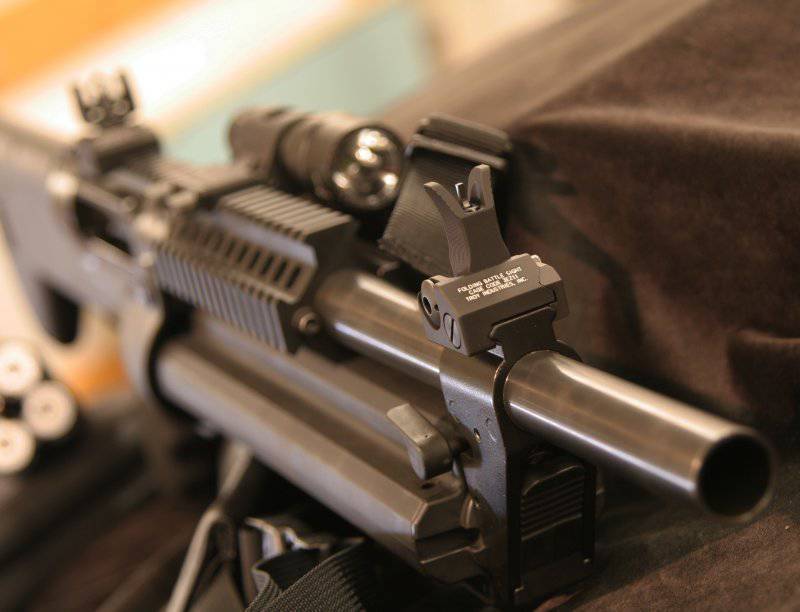 As you know, all ingenious is simple, especially when it comes to issues of firearms weapons or its individual nodes. No matter how designers try to subtilize and wind up automation systems, power systems, etc., they get a normal result quite rarely, which is not surprising, because it has long been known that the simpler the more reliable. But at the same time, progress does not stand still. Weapons now require that it almost the enemy itself took aim and fired, and with such demands it is very difficult to remain within the “simplicity” framework. In other words, no working conditions for people. Something different is the case for those designers who work with smooth-bore weapons. Being in demand mainly in the civilian market, where the consumer is less picky and rejoices at every innovation, this weapon is updated much less frequently, and many manufacturers do not even think about the appearance of a smooth-bore gun model that is completely different from all others. Although pleasant exceptions do happen. So, for example, SRM smoothbore gun which we will discuss in this article. 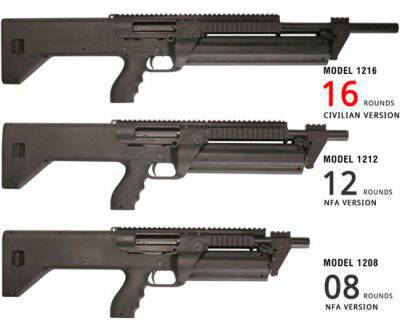 One of the problems of smooth-bore weapons is the small capacity of its store, or rather, it is not even a problem, but a feature. After all, nobody needs a smooth-bore shotgun with a magazine to the ground in which 30 cartridges fit, and in those rare cases when a smoothbore is used in the army and the police, the large capacity of the magazine is also not needed. Nevertheless, work in this direction is underway, all possible and impossible options for the location of cartridges have been tried, somewhere designers will succeed, and somewhere fail. SRM Arms presented its own version of a multiply shotgun rifle at the beginning of 2008. The designers managed to achieve not only a significant increase in the capacity of the weapon shop, but also to solve the problem of quickly changing the type of ammunition into a gun, which is a rather topical innovation for both hunters and the army and the police. At the beginning of the article it was said that all ingenious is simple, and in fact the design of the SRM gun is very simple and strange that no one had previously guessed.

Generally speaking, SRM's multi-charge, self-loading rifle refers to the 3 Model 1216, Model 1212 and Model 1208 weapons. All these models are 12-caliber rifles, as indicated by the first two numbers in the title, the remaining two numbers indicate the number of rounds that can be simultaneously loaded into the magazine. Also, these three models of weapons differ in the length of the barrels, which played a cruel joke with the manufacturer. The fact is that in many states of the USA there is a restriction on the shortest possible shotgun, for this reason civilian consumers are allowed to buy only the longest version of a smooth-bore gun with a magazine with a capacity for 16 cartridges. Although it seems to be possible to purchase a shorter version, but for this you need to obtain a separate permit and pay an additional tax. The longest model of a smooth-bore shotgun has a barrel length of 457 millimeters, the average model of 330 millimeters and the shortest model has a barrel length of just 254 millimeters. The length of the barrel and limited by the capacity of the store, as it is located under the barrel. 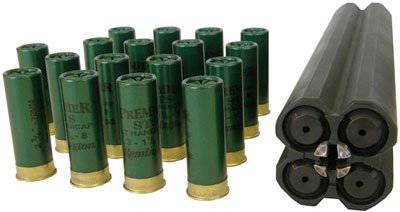 And now about the most interesting - about the store of these weapons. The fact is that in fact it is not one store, but four, which are connected in parallel. What is good for a hunter is not a secret to anyone, but for law enforcement agencies why such a system is not clear, since at first glance they don’t have much diversity in ammunition. Although if you think about it, it is possible to quickly switch between traumatic and shotgun cartridges, in general, such an opportunity will not be superfluous. But the most interesting thing in all this design is that switching between the four stores connected together is made by the shooter himself in a completely random order. In order to switch from one store to another, an arrow needs to press a small switch at the front fastening of the store and turn the store in any direction before it locks back. It should also be noted that this weapon has such a remarkable feature as a slide lag, which allows for the exhaustion of cartridges in one tube, to quickly turn the magazine and continue firing without making any manipulations with the bolt. In addition, the store can be completely removed and replaced with another one, similar in length, for this you need to move another lock, which is also located at the front of the store, however, it is unlikely to be done quickly, but in general this possibility is not superfluous.

As noted above, SRM multiply-charged rifles are self-loading weapons, so it’s not a bad thing to tell you about what type of automatics this weapon has. And the automatics is built according to the semi-free-bolt scheme, and in fact similar to that of the G3, so that the SRM gun is not unique in this respect, but it’s very original, so you don’t recall a smooth-bore weapon with a similar automation system. No less interesting feature is the fact that this gun can be easily adapted for shooting from the right or left shoulder. The adaptation is carried out in case of incomplete disassembly of weapons, which, in principle, does not take much time and does not require any special tool, but of course, there is no question of instant adaptation, although for the civilian population this possibility is not necessary in principle. The switch of the fuse and the lock of the magazine were originally duplicated on both sides of the weapon, so there is no need to make any manipulations with them. 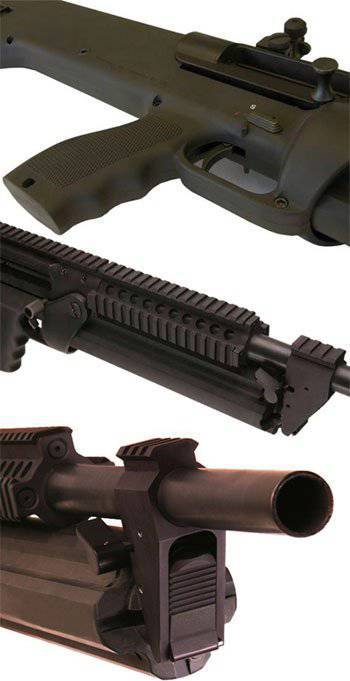 Given the capacity and design of the weapon shop, as well as the fact that the self-loading rifle is an interesting issue is weight. Due to the fact that the design of the gun is widely used high-strength plastic, the weapon itself can hardly be attributed to the heavyweights, but it is not easy. So for the longest model, the length of 825 millimeters, the weight without cartridges is equal to 3,2 kilogram, for the average with a total length of 698 millimeters, the weight without cartridges is equal to 3 kilogram, and for the shortest one with the total length of 622 millimeter, the weight is just 2,8 kilograms. In general, these are quite small indicators, but do not forget that the weight of ammunition is added to this weight, and when reading the store location, the weapon balance is initially shifted forward, and if you also charge the entire magazine with 16 cartridges, the barrel will significantly outweigh that not everyone will like it.

Another interesting point in these SRM models of rifles is that they are devoid of the usual aiming devices. Apparently the wide distribution of various additional devices will soon lead to the fact that the open sights will be considered completely obsolete, but if this happens, not very soon, because from the very first days of selling these guns, the consumer has requested that the weapon be equipped with a front sight and entirely, and that was done. The truth is very peculiar. On the front fastening of the store, a fastening strap was cut into which the front sight is mounted, and the rear sight began to be attached to the fastening strap passing over the entire upper surface of the weapon. At the same time open removable sights are offered in a variety of options. In addition, all variants of the open sights are made folding, so that they will not interfere with the use of the collimator. Also, on the left and on the right, there are additional short mounting brackets for additional devices in the form of a flashlight or LCC.

This weapon appeared on the market quite recently at the end of 2011 of the year, despite what was demonstrated in 2008. Such a delay can be explained by the fact that the manufacturer’s company is far from being the largest and establishing mass production of weapons, which, however, requires not the largest, but still, precision in production is not the easiest. But from a different rifle any store is suitable without a “file”, for which it was clearly worth postponing the entry of weapons to the market. In general, it is somehow sad that even a relatively small US company manages to make a qualitatively new weapon, albeit spending a few years setting up production, but unfortunately this cannot be said about individual domestic models, although many may disagree with me .

Naturally, these weapons are not devoid of negative qualities, at least in the form of a weapon balance shift, however, how easy the manufacturer has been able to achieve compact dimensions, multiply charged, the possibility of using different types of ammunition, depending on what the situation requires, shows that Everything was thought out and implemented by prototypes in experimental models of weapons, not to mention the mass-produced samples, so there is still room for development. Even if we take this construction, then it could be improved by automatically turning the magazine when all the cartridges in the tube are used up, although then the store itself would have to be closed with the foregrip, but nevertheless there is room to move. Not to mention the transfer of the location of the store to the butt, which would level the balance of the gun. In general, far from everything is invented, as it turns out, and this is good news.