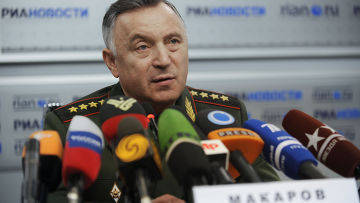 Moscow opposes the approach of NATO’s military infrastructure to the borders of Russia, in particular, by admitting new members to the Western alliance.

The chief of the General Staff of the Armed Forces of Russia, General of the Army Nikolai Makarov is not inclined to speak in the press, but the "Politician", nevertheless, gave the first big interview.

- What is the priority in strengthening the armed forces of Russia? Conventional weapons or nuclear deterrent forces?

- nuclear weapon is an important deterrent to any military conflict. Thus, the development of strategic nuclear forces is one of the priorities of the armed forces. But the Georgian-Ossetian conflict showed that the presence of nuclear weapons in Russia did not become an obstacle for the military-political leadership of Georgia to decide on an armed attack on Russian citizens in South Ossetia. In this situation, only general purpose units could complete the task.

- At what stage is the process of full professionalization of the Russian armed forces?

- We believe that having a fully professional army is the best option. At the same time, we understand that the Armed Forces cannot fully switch to a contract, at least not in the foreseeable future. In the Russian army, the combination of contract and conscription service remains the basic principle. And we are not in a hurry to refuse recruits. This will allow us not only to ensure that the Armed Forces are fully staffed, but also to prepare mobilization resources at no additional cost. We take on contract only those who served a military term and made a conscious choice in favor of professional military service. We mainly send such servicemen to positions that determine the combat capability of military units in connection with the operation of complex and expensive equipment.

- How are you going to "fend off" the new version of the American anti-missile shield?

“We are closely following the development of the American missile defense system in Europe, and we consider it inadequate to the existing missile threats. At present, Russia is making political efforts that are aimed at urging the leaders of the United States and NATO not to take unilateral actions in this area. We believe that the deployment of US anti-missile systems in Europe can serve as an incentive, including for "third" countries, to improve ballistic missiles and their military equipment in order to effectively overcome missile defense, which will inevitably lead to a missile arms race.

- Does Russia plan to build six new aircraft carriers as the basis for six strike groups?

- Work on the technical project of the future Russian aircraft carrier will be completed in a year or two. The project involved several organizations. We will determine the number of aircraft carriers needed by our country after analyzing the results of experimental design work based on the state armament program, taking into account the military-political situation and the threat to the military security of our country.

- What is the dynamics of the installation program on combat duty of the C-400 air defense complex and Topol-M missiles?

- The Topol-M missile system is already in the arsenal of the Russian army and is being used in fixed and mobile versions. Because of the danger posed by ballistic missiles of various types from a number of countries, in order to ensure effective air defense of the state and the armed forces, the anti-aircraft missile of the new generation C-400 Triumph system also entered the air. Today, the task of combat duty of the air defense of Moscow and the central industrial complex is performed by two such anti-aircraft missile systems.

- What can you say about the proposal of President Medvedev regarding the new system of collective security in Europe?

- In our opinion, the need to create a new system of collective security is dictated by the inability of NATO, the EU, the OSCE to effectively solve the existing security problems today. The advantages of a treaty on European security promoted by President Medvedev over the existing international legal framework are as follows: the agreement imposes legal restrictions on unhindered expansion of military blocs in Europe and the Atlantic, bans the deployment of large military units in foreign countries, focuses on the consent of the participants continue to improve the existing arms control regime. The principles enshrined in the agreement will allow any participant to act in a national capacity, regardless of membership in any alliance. Most importantly, the draft international legally binding document implies the creation of a new European security system with the direct participation of Russia and its allies on updated criteria and principles.

- What is your vision of the future of NATO and the expansion of the alliance to the east now that the Warsaw Pact is no longer there?

- Russia's approach to the development of relations with NATO is based on a combination of consistent protection of national interests and constructive search and development of those areas of cooperation where cooperation can bring real benefits to Russia and NATO.

We have managed to pass a difficult path from confrontation to the development of dialogue and cooperation in the interests of the security of our countries.

At the same time, the threat to Russia is the desire to give NATO’s military potential global functions and move closer to the borders of the Russian Federation, including by admitting new members to the alliance. This explains Russia's negative attitude towards the expansion of NATO. We must not forget that this question was one of the conditions for the unification of Germany. Russia is ready to develop high-quality cooperation with NATO in responding to real, rather than imaginary security challenges. Whether NATO is ready, time will tell and the new strategic concept of the alliance.

- Mr. General, how do you assess the attempts of some Western circles to reconsider the role of the Soviet Union in the victory over fascism and Nazism?

- The Second World War is the greatest bloodshed of the 20-th century. It is well known that the Soviet Union suffered the greatest civilian casualties in this war and made a decisive contribution to the destruction of fascism and the liberation of Europe from Nazism. In the USSR, there was not a single family from which someone would not fight, be not killed at the front, or not die in captivity.

Today we are witnessing how they try to rewrite history World War II, distort its causes. Twists the essence of the events of that period. Invaders are rescuers, executioners patriots, and the liberators are almost invaders. The audit of the contribution of the Soviet Union to the victory over fascist Germany is being realized in the interests of some states and political groups that are trying to get certain dividends from such falsification. To avoid a repetition of a terrible tragedy, such as the Second World War, it is important to resist the twisting of history.