24 September 2012
84
On the Finmarket With reference to the agency "Bloomberg", the latest forecast by Chinese Academy of Social Sciences economist Yuan Gangmin was published, regarding the sad state of the Chinese economy.

The Chinese forecaster believes that the downturn in the growth rate of the economy of his native country is likely to be much longer than during the financial crisis of the 2008 year. Among the reasons for the decline in growth are the deterioration in demand in foreign markets (let us add: primarily in EU countries where the crisis is rampant, including debt. The EU is the largest consumer of Chinese consumer goods and other products) and limited lending to small businesses in the Middle Kingdom.

The growth of the PRC economy may slow down for the ninth quarter in a row and reach the level below 7% in the first quarter of 2013. 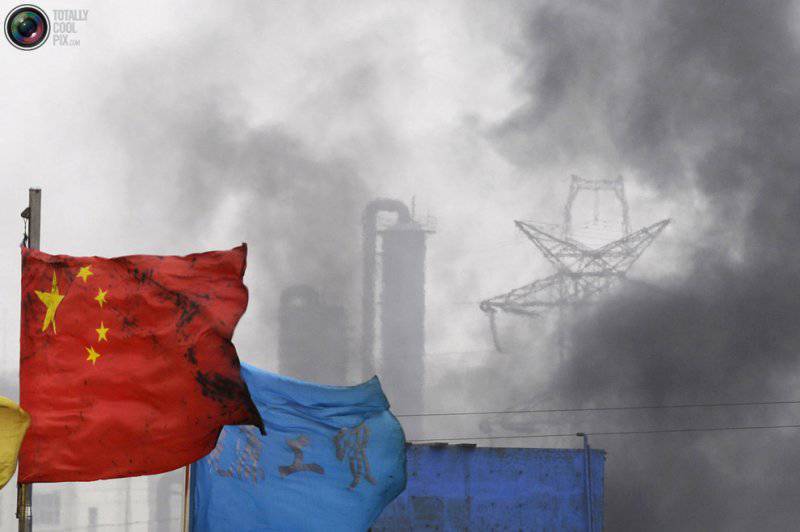 According to Yuan Gangmin, the expected long recession will encourage the new leaders of the Chinese Communist Party (their names will be announced this year) to expand the list of incentives: after all, production activity in the PRC falls for the eleventh month, and the Central Bank focuses on controlling inflation.

Meanwhile, the head of the PRC State Committee for Development and Reform, Zhang Ping assures the general public that China's economy is in order, and even the notorious "bubble" in the real estate market is slowly being blown away. “The state policy in the field of economics has recently been very effective. The state of the economy stabilized, and began a slow growth. The size of speculative investments has declined, as the government has managed to influence the real estate market, ”said Zhang Ping.

However, in the second quarter, China’s economy grew by only 7,6% compared to the same period last year: the growth dynamics is the lowest in the last three years. This year, the Chinese economy should grow by 8% (government forecast), which will be the weakest indicator since 1999.

In order to stimulate economic growth, Beijing has increased investment in infrastructure projects, reduced the volume of mandatory bank reserves, and lowered the discount rate on 150 points.

But stimulus measures came under a flurry of criticism from the most experienced Chinese economists.

Wu Jinglian, a senior researcher at the Center for Research and Development under the State Council of the People's Republic of China, believes that the Chinese government’s economic incentive program is not only bad, but not feasible. In his opinionThis program will have serious consequences. By the way, 82-year-old Wu Jinglian is known for openly expressing his views, and the Chinese media call him "an economist with the purest conscience."

The China Economic Incentive Program is a package of investment anti-crisis measures. In the 2008 year, when the financial crisis hit, the People's Republic of China invested 586 billion dollars in public funds in infrastructure, health care, education, cheap housing, etc. Some economists criticized the Chinese government for such large-scale measures because of the "pitfalls".

Wu Jinglian noted that local authorities submitted investment projects worth 2,7 trillion. dollars The question is not only in projects, but also in where to get this huge money.

As one of the non-rational examples, the economist cited a project drawn up in one of the Chinese provinces. According to the project, with its introduction of GDP in subsequent years will have an increase in 14-15%. However, the amount of investment each year will increase. In 2011, the level of investment in this province was 89% of GDP, and in the first half of this year it reached already 120% of local GDP.

If investments exceed GDP and, moreover, grow further, the project is not just unprofitable, it promises big losses in the future.

The state panacea against irrational or directly unprofitable projects in China is known (with something it looks like a Russian economic medicine). To stimulate the economy, the Chinese government is going to spend a budget surplus. At the World Economic Forum in Tianjin, Chinese Prime Minister Wen Jiabao said that by the end of July, the surplus was 1 trillion. yuan ($ 158 billion), and it can be used to stabilize economic growth.

Independent analyst Hu Simen warns: The CCP is going in a dead end direction, trying to maintain the legitimacy of government through economic growth. The result will be the opposite of what the party wants to achieve.

Populist measures, we will add from ourselves, to which the surplus will be spent, can have an impact on economic growth, but in the short term, and at the same time can serve to short-term strengthening the positions of the Communist Party. In the long term, this will lead to a “freezing” of the inertial policy of the government - and if the level of domestic consumption in China remains low and the crisis of Western economies causes stagnation, and then a recession.

The situation is also affected negatively by the rather aggressive foreign policy of the PRC. One example is the dispute over the Senkaku Islands with Japan. how said Recently, Shen Danyang, a spokesman for the Ministry of Finance, the island dispute will have a negative impact on trade with Japan. China became the largest market for Japanese exports in 2011, and Japan was the fourth largest market for Chinese exports. And what now? Japanese investment in China increased by only 16,2% over 8 months of 2012 compared to the same period of 2011, but last year the figure for the same period showed an 50-percent increase. As for China's investment in Japan, in January-August 2012, they fell by 11,1%.

Foreigners do not consider the Chinese market to be very attractive for capital investment. "The fall in foreign investment will aggravate the current slowdown in the country's economic growth" - says Joy Yang, Chief Economist, Mirae Asset Securities. He believes that the Chinese authorities should take steps to support economic growth, including measures to stimulate domestic investment and consumption.

In addition to the fall in demand in Western Europe and the USA due to the financial crisis, stiff growing competition in Southeast Asia, and at the same time in some African countries, where manufacturing is also moving, prevents China from rising.

Head of the analytical department of the IC “Trade-portal” Alexey Rybakov indicatesthat in the region, China is under pressure from Indonesia, Bangladesh and Vietnam. The profit of industrial companies in China has been falling for the fourth month in a row. In July, 2012, revenues declined by 5,4% over the same period a year earlier, in June, the decline was 1,7%, and in May, profits fell by 5,3% (year to year). In foreign firms, the analyst recalls, the profitability of operations is also declining - due to the annually increasing cost. Everything is more expensive in China: labor, raw materials, materials. And this is happening against the backdrop of weakening global demand.

Well, if labor in China rises in price so that production leaves the Middle Kingdom, in the coming 10-20 years, when the price of workers rises from Chinese competitors, the world can return to the former economic model, which is much more focused on domestic demand than on external (if you do not talk about the export of raw materials, which in the depths of the planet is also not for 200 years).

Economists at Deutsche Bank and PWC are convinced that the distribution of economic weights will soon stabilize: the world will return to the structure of the economy that prevailed before the industrial revolution.

This opinion complements the other organically. Its author, apparently, negatively relates to the “copying” economy of China.

George Magnus, a senior economic adviser to UBS, formulated his own definition of the “Asian miracle”: these countries, in his opinion, are moving “back to the future”. The West, therefore, is going forward, and the Chinese, also forward, but with the ass. And because soon they will stumble somewhere.

Until, says Comrade Magnus, the world is divided into two parts: Asia is growing rapidly, but Western countries are slowing down. But this is not for long. The main risk for the APR countries and especially for China is the development of new technologies in the West. Technological progress once led to the rapid progress of the West, and it is likely that this will happen again.

There are several high-tech areas in which, as Magnus believes, the Chinese will not catch up with the West: 1) life-changing goods (smartphones, tablets); 2) new industrial technologies (breakthrough technologies of the near future - like 3D printers); 3) shale revolution (cheap raw materials that the United States received thanks to the revolution in the extraction of shale gas and oil; chemical and construction companies should benefit from this).

Asian countries will inevitably lose in the new technological struggle. China is particularly affected, as it is involved in a complex global supply chain. The destruction of existing complex chains is one of the main long-term risks for the PRC.

As proof, the analyst cites the following facts. The interest of corporations to China is fading away - both with the development of high technologies and due to the constant rise in prices of Chinese labor resources. A modern example: Taiwanese company Foxconn, which assembles equipment for Apple, Sony and Nokia in China, said that in the next three years it plans to install a million robots in its production facilities.

Thus, companies will soon have no need to organize assembly plants in China at all and then spend money on their delivery to their own country.

In the Chinese ports, all this is already well understood.

Rui Chenkan, a leading and economic observer of the Central Television of China, 1 September wrote in the microblog: “The economy continues to go down. PMI has reached a new low of 49,2%, below the critical line. PMI steel industry accounted for 40%, which is the lowest for 4 of the year. Significantly reduced port operations in the Pearl River Delta. This indicates a weakening of production. Customs operations were down by 30%. Significantly deteriorated business in the field of freight. Thousands of freight carriers simply do not have a job. At the Zhongshan port terminal, two thirds of the containers are empty. ”

And the general director of Beijing Sunway Imp. & Exp. Co., Ltd. ", a large Beijing export-import company, сообщилthat mountains of coal have accumulated in the port of Qinhuangdao, which has nowhere to go and that "this has never happened since the founding of the PRC".

So, in the near future, China will have to compete fiercely with its neighbors who want to snatch their piece in the global economy. Also, the Celestial Empire will have to answer the technological challenges of the West. Experts doubt that China - the country of assembly and reproduction industries - is able to reach the front lines of progress, and, therefore, the Chinese will give way to the United States and Europe in a competitive battle. A couple of decades later, or a little later, when the Chinese “economic miracle” is forgotten, the world will return to its former, less open economic model of management, which will be coupled with a high-tech robotic production process. True, economists say nothing about the fact that unemployment in the Western countries will remain the same: after all, robots will now produce products, not people (robots will probably also be robots, and then see the Terminator film in the main role - A. Schwarzenegger). However, the weakening of the "Asian" dependence and the return of large-scale production to home will already be a great economic and geopolitical victory of the West over China.