Reform of the Ukrainian army or an attempt to maintain power 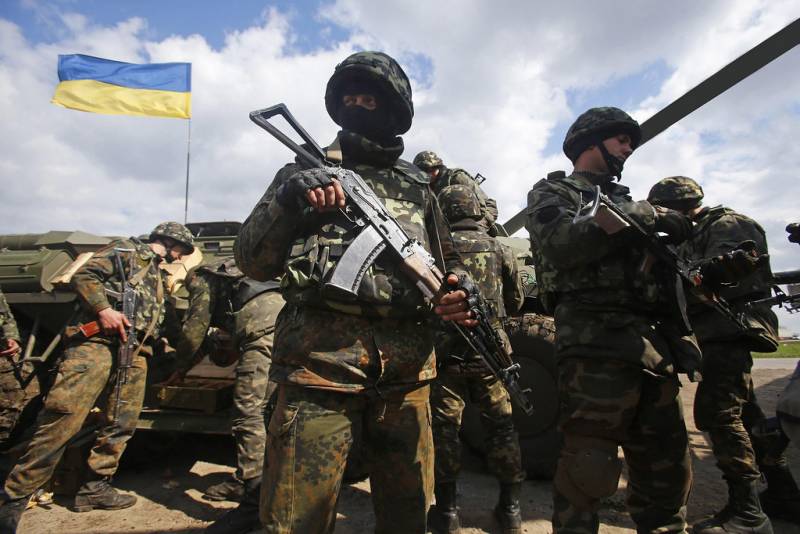 Ukraine is waiting for the implementation of the instructions of President Zelensky and the adoption of a law on the abolition of compulsory conscription into the Armed Forces of Ukraine.

At the same time, a lot of questions arise.

For example, how can the transition to a professional army be connected with an increase in the number of personnel?
It is clear that the pros are always better prepared. They are better trained, have more modern weapons and military equipment. Accordingly, the training of a professional requires much more time than a conscript soldier.

Or another topic that has been disturbing society for quite a long time - the military registration of women. Another reform, more like an attempt to maintain power.

At a time when there are simply not enough men for a full-fledged recruitment of the army, such a formulation of the issue with personnel is understandable. But a professional army implies a competition for entry into the service.

Well, the third important aspect is that professionals should receive salaries and social benefits that would compensate for the difficulties and dangers of military service. And this is not only a decent salary, but also various payments and benefits in case of loss of health or death of a serviceman.

Even a simple question about the locations of such units and subunits is almost impossible to solve in modern conditions. Even if the global West floods the country with loans.

Some readers create the image that Zelensky's decree impressed the Ukrainians.

Alas, in the desire to reform the army, or rather, to win over voters before the next elections, Zelensky is far from the first.

The first decree on preparations for the abolition of military service was signed by ... President Leonid Kuchma 20 years ago.

Then Viktor Yushchenko played on the same in the presidential elections. His pre-election program greatly benefited in comparison with other candidates precisely by the presence of a clause on the abolition of military service.

Even the "enemy of the Ukrainian people" President Viktor Yanukovych planned to cancel the conscription in the spring of 2014.

Fortunately, those who want to serve in the army, a new "people's power" came to the trough after the Maidan, and on May 1, 2014 and. O. President Oleksandr Turchynov restored the draft.

So, the current president is just another entertainer announcing the next number of the program.

But what is the reason for such love of Ukrainian presidents for this track?

Alas, I will not reveal a big secret to you and will not tell you anything new. The reason is exactly the same that was in the Russian army at the end of the last - the beginning of this century. The unpopularity of military service. A complete mess in parts and subdivisions. The last execution in the National Guard is a wonderful illustration.

Zelensky is smoking his own...

In the case of Zelensky, there is another reason that he simply cannot ignore.

This is a horrendous loss of popularity for both the president himself and the “servants of the people” party.

Hence the emergence of the "Problem-2023". In the fall of next year, more precisely, on the last Sunday of October, the 29th, regular elections to the Verkhovna Rada of Ukraine should be held.

"Servants of the people" today is not just not popular, they are slipping lower and lower in the rankings.

Today they are supported, according to official figures, only 25 percent of voters.

Then everything is simple.

The majority will nominate their prime minister, form a government, effectively turning the president into the "Queen of England", minimizing the chances of him being re-elected. And this is a personal danger for Zelensky. The predictions of some of his political opponents about a second term may well come true, but already in prison.

Can Zelensky save his own skin?

Zelensky needs to reschedule the parliamentary elections to October 2024.

So, it is not yet clear how the current government in Kiev will act.

Knowing the alignment in the political kitchen of Ukraine, it becomes clear much of what the Ukrainian president and government is doing.

You need to get back the support of the youth. It is necessary that the most active part of society blindly follow Zelensky. Cancellation of the call is the surest remedy for this.

And in addition to this, let me remind you of another promise of the President of Ukraine.

Remember the already announced decision to change the election law and allow citizens to vote from the age of 16?

So Zelensky will get a decent addition to "his" electorate.

You can promise anything and anyone...

And yet, is a transition to a professional army possible in Ukraine today?

Maybe Zelensky sincerely believes in his own words?

“This decree is the start of Ukraine's transition to a professional army. This decree is not because "war is coming soon." This is what I tell everyone. This decree is so that soon and further there will be peace – peace in Ukraine.”
Alas, no matter how much you “pull an owl on the globe”, it is not possible to fulfill what the President so loudly declared.

A professional army is expensive. Therefore, only non-poor countries can afford it. Ukraine, on the other hand, firmly occupies the first place at the end of the list of the richest European countries.

It also fails because few people want to fight in the Donbass.

The senselessness of this war, the lack of understanding of why they are sitting in the trenches, does little to help Kiev maintain the morale of the Armed Forces of Ukraine. All calls to return "their land" stumble upon the soldier's - "my land is at home."

Zelensky proposes to replace military service with an “intensive military training system”, when every 3-4 years a soldier will be called up for 3-4 months and repeat the basics of his military profession. Outwardly, it looks beautiful.

And what about the outflow of the population from the country?

"Intensively cook" those grannies who are shown today in advertising for territorial defense?

Of course, you can put on rose-colored glasses and dream, like Minister of Defense Oleksandr Reznikov, about turning Ukraine into a Cossacks, and Ukrainians into a parody of the Cossacks. A parody simply because, in addition to wearing forelocks, bloomers and sabers, the Cossacks were also engaged in farming.

“My prediction is that over the course of a decade, Europe will understand that it is better to finance the Ukrainian army as one of the main subjects of European security. And Ukrainians will not pick olives there, but proudly wear military uniforms, and Europeans will pay for it.”
Increase the army by 100 thousand people!

And if not to dissemble?

If you openly declare how many percent of the units of the Armed Forces of Ukraine are equipped even in the east?

Is there at least one with a 100% set of personnel, equipment and weapons?

What an open secret.

“Over the past five years, 130 people have left the ranks of the Armed Forces of Ukraine, and units are now staffed by 50-60%.”

Very short at the end

All the initiatives that are being discussed in Ukraine today cannot be taken seriously yet.

Simply because the Ukrainian president does not decide anything at all. All his recent speeches look somewhat chaotic, inadequate.

And add here the pumping of Ukraine weapons and permanent control of Zelensky by US vassals.

Look at Zelensky's work schedule - he simply has no time to work, daily visits, meetings and other protocol events. I get the feeling that it is specially downloaded so that there is not enough time for a sober assessment of the situation.

Everything he proposes and proclaims today is just words.

And tomorrow cancel the cancellation - in connection with the aggravation in the Donbass.

Why is Zelensky better than Turchynov?

Once passed, the second will pass.

From this it is easy to conclude that all the projects of Zelensky and his “greens” are nothing more than distracting maneuvers. It is necessary to load information platforms with something in order to distract people from the main thing ...