Kazak V.V. Orlov-Denisov - Hero of the Patriotic War 1812 of the Year

24 September 2012
3
The Russian glorious Cossacks did not stay aside from the struggle against the French invaders in 1812 year. The name of the brave Don Cossack V. V. Orlov-Denisov is forever inscribed on the military pages of the Patriotic War 1812 of the year.


Vasily Vasilyevich was born in 1775 in the family of Ataman, a Cossack cavalry general Vasily Petrovich Orlov, who was a great Don landowner. Vasily Vasilyevich's mother is Daria Fedorovna, née Countess Denisova, daughter of a cavalry general and the first count from the Don Cossack class Fyodor Petrovich Denisov (it’s from grandfather 26, old Vasily will receive a count title and a family prefix for Denis to the main family name).
Service state 12-year-old Orlov began in the ranks of the Don Cossack troops. Already in 1788, he was promoted to the rank of centurion (and this was in 13 years!), And for two years he served in the Black Sea, in the Cossack frontier detachment, guarding the empire from the Turkish troops. Later he was transferred to the service in St. Petersburg, where in 1791, Orlov was given the title of Esaula, and soon a military foreman.

In the capital, Vasily Orlov rotated in a rather high secular circle, met a wonderful Russian poet of the 18th century, V.G. Derzhavin, who helped a smart young man to determine his life priorities and advised Orlov to enter a private educational institution, which he did. 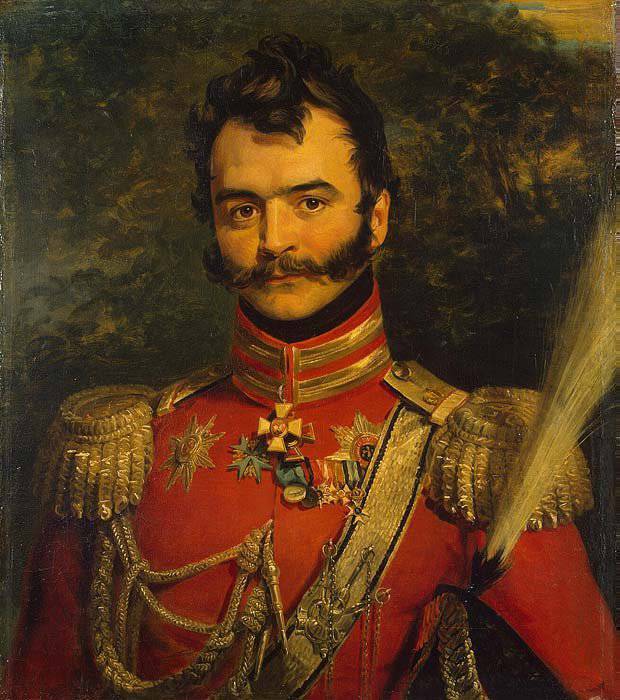 The teaching of Vasily was easy, but the classes had to be stopped due to the outbreak of war with Poland in 1794. In it, Orlov took part in one of the border cordons formed from the Cossack regiment Krasnov. So, over the next seven years, Orlov had to lead a bivouac Cossack life.

In the 1798 year, Vasily Orlov serves as a lieutenant colonel, the next year - the colonel, and in the 1801 year, together with the regiment, returns to Don, where he receives the title from his grandfather.

1806 brought great changes to the life of Orlov-Denisov: he was transferred to the rank of senior officer of the Life-Guards Cossack regiment to St. Petersburg. And this was a significant increase in military social status, since the Life Cossacks guarded the Russian Emperor Alexander I.
The following year, Orlov-Denisov, as part of the Cossack regiment, accompanies Alexander to the war with Napoleon. His first battles in this campaign, the count begins with the battles against Marshal Ney, and in the hot battle at Gutstat 28 on May 1807, he repels the attack of Napoleon’s beloved cavalry guards-Chasseurs imperial regiment. In the subsequent battles, Orlov-Denisov defended the Russian batteries, and later, during the retreat of General Benigsen to the city of Freeland, the brave Count Orlov defended the crossing at the Alla River. For participation in these battles, Orlov-Denisov was awarded the Order of Saint George of the 4 degree, and upon concluding a peace treaty in Tilsit he was granted the rank of major general.

The Finnish campaign Orlov-Denisov has already met as the commander of the Life Guards of the Cossack regiment, and his first feat is the capture of the city of Borgo. Later, Vasily Vasilyevich, along with his squad, captures the Finnish Helsingfors, managing to take the 19 guns as Swedish trophies. After the fall of the most fortified Swedish fortress, Sveaborg, in the attacks on which Orlov-Denisov also took part, he was entrusted with the defense of the shores of the Gulf of Bothnia. For the heroic accomplishment of this task for three months of continuous battles with the Swedish partisans, Count Orlov receives the Order of St. Anne 2 of the degree with diamond signs.

In January, 1811, Count Orlov, for his numerous services to Russia, was granted the rank of Adjutant General.

About the new military campaign of Napoleon Orlov-Denisov found the very first, because he was carrying guards with his Cossacks on the Neman River, and immediately sent a messenger to his leadership with a message about the start of hostilities. He also gave the first fight to the attacking French.

Two days later, after the start of the Russian-French war, Orlov-Denisov attacked three squadrons of Napoleon's hussars, and during the retreat from Vilno, he conducted two successful attacks on French cavalry, capturing Colonel Count Segur, the distinguished brother of Adjutant Napoleon. Later, during the retreat of the Russian army into the depths of Russia, Orlov-Denisov bravely acted as part of the rearguard of the 1 Army. 23 June 1812, Vasily Orlov-Denisov, leading his Cossack detachment, fought heroically against Murat's cavalry troops near the village of Kocheržiški (capturing Prince Hohenlohe). On July 15, commanding again the Life Guard of the Cossack regiment and the detachment of the Black Sea hundred, Vasily Orlov-Denisov defeated three French cavalry regiments near Vitebsk. These heroic deeds brought the Order of St. Anne 1 degree to Count Orlov, along with a gold award saber studded with diamonds, engraved with the inscription “For Bravery”.

Participated Orlov-Denisov and the Battle of Borodino. Being with his Cossacks in the corps of cavalry of General Uvarov, he, along with this corps, crosses the river Kolochu and in the combined-arms team strikes the left French wing. The sudden appearance of cavalry and Cossacks from the left flank prompted Napoleon to stop the attack of the Guards troops, which gave Kutuzov the necessary respite to strengthen the central positions of the Russian army.

After the glorious Borodin, Orlov-Denisov again acts in the rearguard of the Russian army, having managed to distinguish himself by his valiant attacks under Chirikov and Voronov. In a remarkable way, Orlov-Denisov showed his courage during the battle of Tarutino. Having attacked unexpectedly the French units of Murat by the Cossack-cavalry detachments, Orlov managed not only to disperse the enemy, but also to seize 38 guns and a camp located on the bank of the Chernishny river as trophies. General Bennigsen wrote to Field Marshal Kutuzov about the battle of Tarutino: “Count Orlov-Denisov behaved in the most brilliant way. His courage does honor to Russian arms. He first gave the idea to bypass the left enemy wing. Based on the views he made, and according to his report on it, I decided in writing to offer your Lordship to attack the enemy. ” The battle of Tarutino for the first time in the 1812 war of the year showed that the Russians would never surrender to Napoleon just like that, it seemed to mark the turning point of the entire war, and Orlov-Denisov received the Order of St. George of the 3 degree for the brilliantly carried out operation.

Shortly after Tarutin, the Cossack detachment of Vasily Vasilyevich continued a series of heroic feats: after the battle of Maloyaroslavets, Orlov-Denisov went to Gzhatsk, where, strongly pushing aside the French, he captured many soldiers and the Napoleonic archive of the secret office.

A little later, a detachment of Count Orlov, united with the detachments of partisans Davydov, Seslavin and Figner, was able to surround the city of Lyakhov, which at this time was a brigade of French General Ogereau. After a short resistance, French troops in the number of 60 officers and 2000 lower military officials were forced to surrender to the mercy of Russian heroes, and this was the first large detachment that laid down arms to the Russian troops in the 1812 campaign of the year.

Having received secret information from the captives, Orlov-Denisov managed to smash a large French column again, capturing a large number of senior officers: among them Generals Bürt, Almeras and Dufoy. After a short illness, Count Orlov returns to combat Russian officers and continues the heroic attack on the French: breaks the cavalry of General Wrede, and a little later inflicts a crushing defeat on Muest's rearguard on Pekarskaya Gora (having managed to capture a large train with gold).

After these brilliant battles, in which Vasily Orlov-Denisov shows himself not only as a courageous warrior, but also as an excellent commander, Alexander I appointed him head of a personal convoy, which for Orlov’s graph meant an almost unmitigated presence with the personality of the Russian emperor. This, however, did not mean at all that Orlov-Denisov could no longer take part in battles, he shows himself perfectly in battles in the cities of Lutzen, Bautzen, Dresden and many other significant battles for that war. The reward for these feats of arms for Vasily Vasilyevich was to receive the Prussian Order of the Red Eagle of the 1 degree, as well as the rank of lieutenant general in 1813 year.

However, the personal battle chord in that war for Orlov-Denisov was the 4 day of October 1813 - the day of the Leipzig battle. Having sent an urgent military assignment from the emperor to General Barclay de Tolly, he, upon returning to the emperor's headquarters, does not withstand the form of fleeing Russian infantry near Leipzig and, noticing a detachment of his Life-Cossacks nearby, instantly heads him in the attack. Realizing that with his 400 men he is practically powerless in front of the huge French army, Orlov-Denisov, nevertheless, briefly delays the attack of enemy infantry, giving the Russian troops needed for restructuring. The two Prussian cavalry regiments that came to the battlefield managed to turn the course of the battle in favor of the Russian army. For the battle of Leipzig, Orlov-Denisov receives from the hands of Alexander I the Order of Saint Vladimir of the 2 degree. The Austrian emperor, however, favors him with the Maria Theresa Order.

After the secondary occupation by the allied forces of Paris, King Louis XVIII of France awarded Orlov-Denisov with the Order of St. Louis 1 degree.

After returning to St. Petersburg, Count Vasily Orlov-Denisov continued his duties as adjutant-general until August 1825, when he was appointed commander of the 5 reserve cavalry corps.

The next increase in the rank of Vasily Vasilyevich was expected on the day of the imperial coronation of Nicholas I, becoming a general from cavalry, in October 1826, Count Orlov-Denisov retired. Returning to the service after Turkey declared Russia a war, General Orlov-Denisov was part of the emperor’s main apartment, later returning with the emperor to Petersburg.

After the death of his wife, Vasily Vasilyevich was forced to finally withdraw from the duties of the army service in order to fully devote himself to raising young children.

A courageous and brave man, a brilliant participant in the 1812 war of the year, General Orlov-Denisov died on January 24 of 1843, and was buried in the church of the Kharkov Transfiguration Monastery.

The name of Vasily Vasilyevich Orlov has forever entered the military chronicles of the military pages of Russian weapons of the beginning of the 19 century, and it must be remembered not only by the Don Cossacks, who are direct descendants of the cavalry of his Life Guards Cossack regiment, but also by the Russian people who honor the memory of all their heroes.