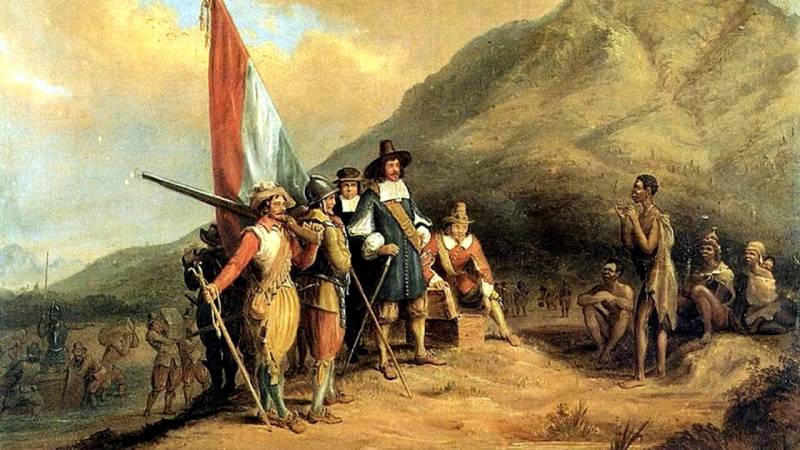 Only two African hillocks,
Just dust and scorching heat
Only the path between them
Only the Transvaal behind,
Marching column only
In deceiving silence
Impressive and adamant
Walking around the country.
"Two Hills" R. Kipling
Unknown Wars. Not so long ago, after the release of material on the British khaki uniform, a discussion arose on our website regarding its use during the Anglo-Boer War of 1899-1902. And a number of readers expressed a desire to learn more about her: and about weapon, which was used in it, and about its course itself. Moreover, they rightly pointed out that the main source of information about this war for our Soviet, and then Russian citizens, is Louis Boussenard's book "Captain Smash Head", read in early childhood. Surprisingly, no one named the novel The Strange General by Oleg Fokich Koryakov, the first story about the Boer War in Soviet fiction. Of course, there is also Wikipedia, but since a lot of time has passed since this war, it is unlikely that any of our people today read reports about this war published in the Niva magazine, as well as in Russian newspapers of that time. It was from this wish, in fact, that this new cycle “for a long time” was born, the name of which is “Unknown Wars” and which will just tell about those of them that we know quite a bit about. In this regard, I was a little more fortunate than others. I had files of Niva magazines in my old house for both 1899 and 1901-1902. And they contain a lot of interesting materials and, most importantly, photographs. And besides this, the same filings are stored in our regional museum of local lore. Come and read, and if you want, then take pictures! Today we will talk about the prehistory of the Anglo-Boer conflict, which is directly related to the European colonization of the African continent.

And it happened that back in 1487, on the way to India, Portuguese navigators headed by Bartolomeu Dias sailed to the southern coast of Africa. But ... they didn’t find anything interesting and went on. 200 years later, the Dutch under the command of Jan van Riebeeck arrived here and on April 6, 1652, they founded the first colony at the Cape of Good Hope. The name was given to her Cape Town. The "problem of the natives" immediately arose. The latter were wild and warlike. But somehow relations with them improved, and the population of the colony began to grow. The XNUMXth and XNUMXth centuries were the time of the mass resettlement of the Dutch here. There was surprisingly much land here that belonged to no one. So they began to manage it. And after the Dutch, the Huguenots from France also rushed here, where just at that time they began to be persecuted.

The settlers did not have enough workers. And, it would seem, there were no problems with them, since there were quite enough local natives with black skin, that is, a priori slaves. Only the kaffirs, with whom the settlers had to deal, were not at all suitable for the role of slaves. I had to import people from Indonesia, and from the island of Madagascar. Gradually they assimilated and gave rise to the colored "Cape Malayas", while the white colonists - farmers, laid the foundation for the "Boer people", that is, the "peasants" (in Dutch "boer" means peasant), who were the descendants of the Dutch, French, and the Germans, who also reached out to these distant, but fertile places.

For almost a century and a half, they were the only white people here, until the British East India Company got here. And in 1795, under the pretext that the troops of Napoleon Bonaparte could get here, English regular troops landed here and the Boer settlements “took under their protection”. In the end, in 1815, these lands were legally assigned to Britain by the Congress of Vienna. And who else would need them at that time? Nobody!

Very soon, the British banned training and office work in the Dutch language, and English was declared the state language. Then in 1833 they also officially banned slavery. Moreover, a ransom was appointed for each slave who was in slavery to the Boers. But twice the accepted price. In addition, it could only be obtained in London, and not with money, but ... with government bonds, which was beyond the understanding of ordinary Boers, not too burdened with education. So the Negro slaves became free, in fact, for free.

This is how three mutually exclusive forces formed in southern Africa. The first is the local black natives who hated all whites indiscriminately. Then the Boers are fanatically religious Calvinists, closed to the whole outside world in their self-sufficiency. By the way, Mark Twain, who at one time visited southern Africa (and far from being an Englishman, whom he himself did not like), wrote about the Boers as follows:

“The Boers are very pious, deeply ignorant, stupid, stubborn, intolerant, unscrupulous, hospitable, honest in their dealings with whites, cruel to their black servants… they don’t care at all what’s going on in the world.”

By the way, not only Mark Twain, but also the assistant to the Russian military attache in the Transvaal, Captain von Siegern-Korn, wrote about the cruel attitude towards his black servants:

“While the black servant serves him with humility and devotion, he (bur - V.O.) treats him calmly, fairly and even good-naturedly. But it is enough for the drill to feel the slightest shade of deceit in the black, the slightest spark of indignation, how the calm and good-natured owner turns into a formidable, implacable executioner and subjects the recalcitrant to cruel punishment, without being embarrassed by any consequences.
The third force in the south of the continent was the British, proud of their young empire, ambitious and unprincipled. As a result, there were more than enough reasons for mutual hatred, given the complete dissimilarity of the cultures of all these peoples, and where mutual hatred exists, it is always only half a step before war. 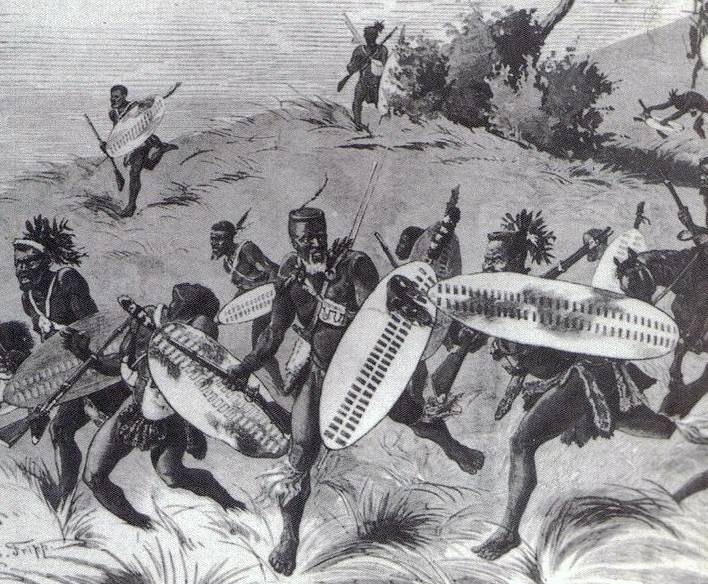 Zulu Warriors 1879 Artist Charles Edwin Fripp (1854-1906)
However, they were not the first to fight, but King Chaka Zulu, who united the Zulu tribes, began to methodically exterminate all their unrelated neighbors and seize their territories. 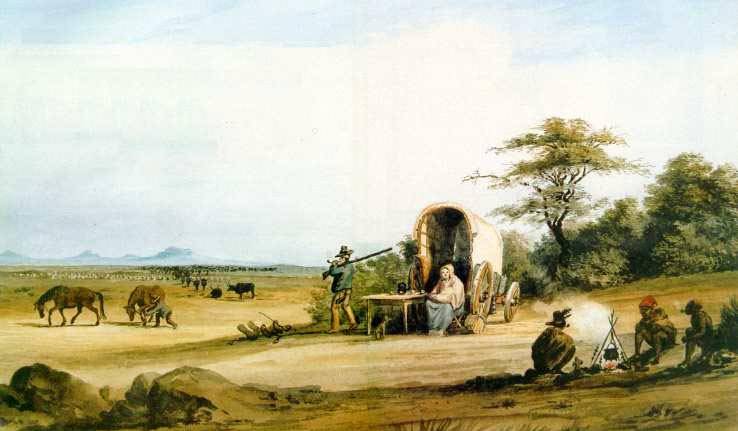 Trekker Drills, 1898 Artist Charles Davidson Bell (1813–1882)
Here, by the way, the Boers decided to get away from the British and in 1835 began the "Great Track" - resettlement to the north. In just ten years, about 15 trekkers went north and settled between the Orange and Vaal rivers. This is where they ran into the Zulus... 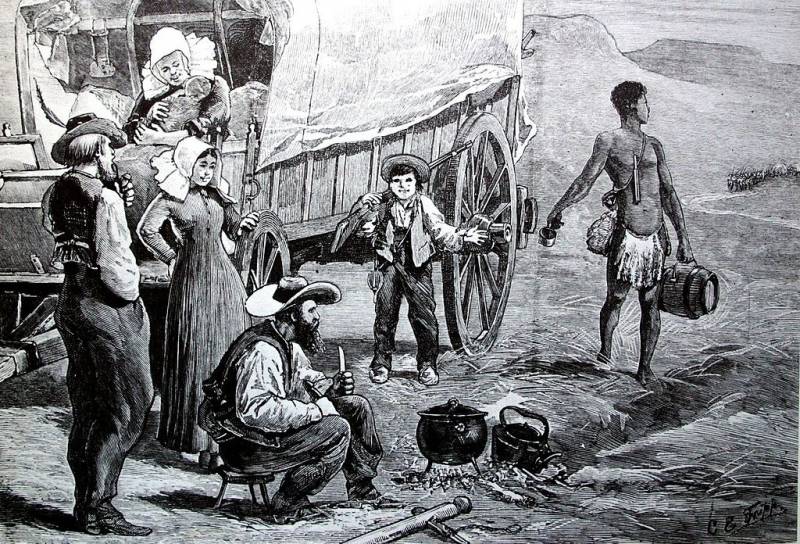 Drill trekkers. Artist Charles Edwin Fripp
In 1837, in order to negotiate with the Zulu king Dingane, the Boers sent ambassadors to his camp, led by their leader Peter Retief. But Dingane, as a true savage, considered them to be sorcerers and ... ordered to kill everyone, and then his soldiers attacked a detachment of settlers and killed more than 530 people, including women and children. Naturally, the Boers decided to pay him off for this ... and paid off on December 16, 1838 in the Battle of the Bloody River, where several hundred Boer settlers led by Andris Pretorius (by the way, the capital Pretoria was founded by him, but he named it in honor of his father) met with the ten thousandth Dingane army. As a result, the Boers killed more than three thousand Zulu warriors, losing only three people wounded. The power of the white man was clearly demonstrated to the Zulus, and the Boers saw in this victory a sign of God's clear mercy to them. 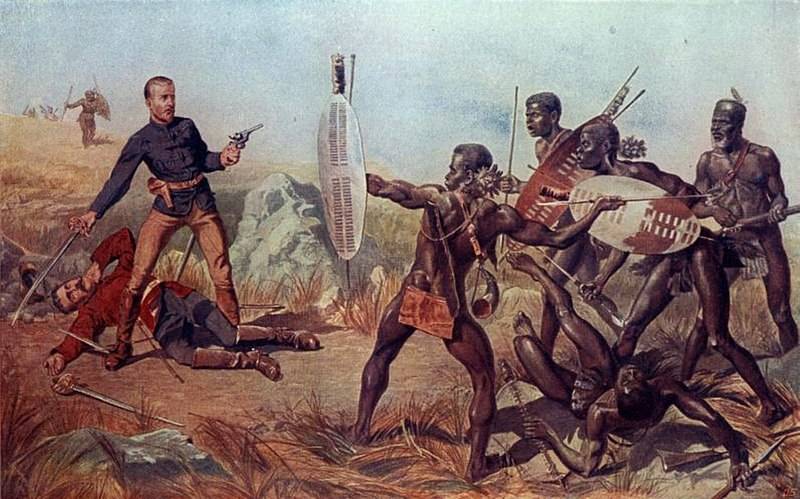 Zulus throwing assegai at a British officer at the Battle of Isandlwana. Charles Edwin Fripp
A year later, a peace was signed with Dingane, according to which the Zulus renounced in favor of the Boers from all the lands south of the Tugela River. The Boers immediately founded the Republic of Natal on this territory, but in May 1843 it was officially annexed to the Cape Colony.

Then the Boers went even further north and created two new republics at once: the Republic of South Africa (or Transvaal) with its capital in the city of Pretoria (in 1852), and the Orange Free State with its capital in the city of Bloemfontein (in 1854). Britain recognized both of these states at the same time. On the one hand, it was all good. They received the long-awaited freedom and the opportunity to live according to the customs of their ancestors. But on the other hand… on the other hand, this “freedom” conserved patriarchal relations in their society, which did not correspond to the realities of the time at all. 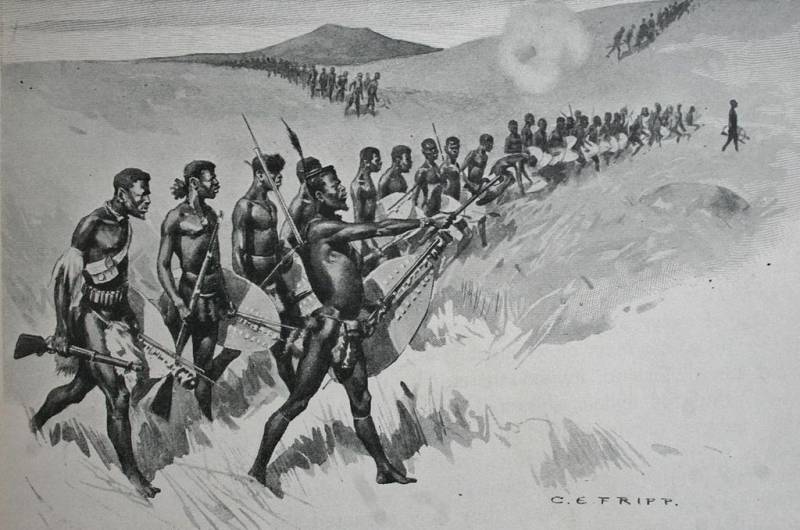 Zulu warriors at the Battle of Isandlwana, 1879 by Charles Edwin Fripp
And then their quiet peaceful life was disrupted in the most unexpected way: in 1870, an absolutely huge diamond deposit was found in the town of Kimberley. Moreover, the find was not interesting to the Boers, however, whole crowds of adventurers of all stripes immediately rushed to the deposit. 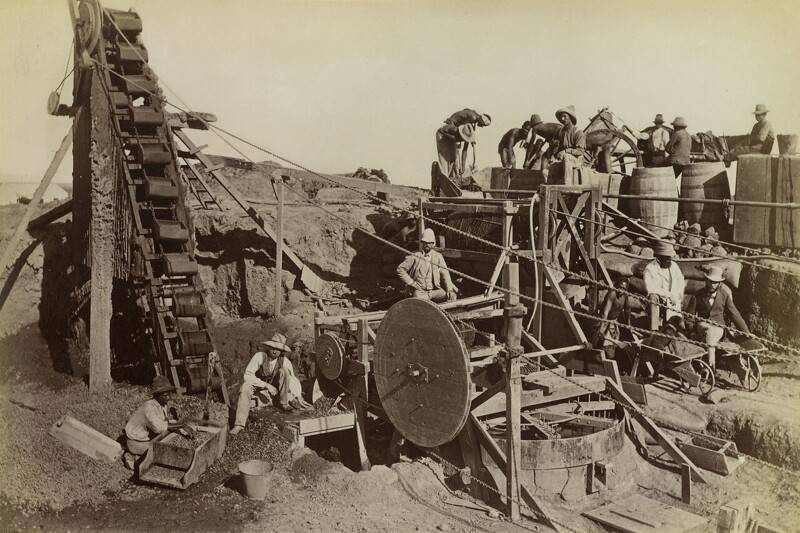 Diamond mining in South Africa. Photos of those years
Among them was Cecil John Rhodes, the future founder of the still prosperous De Beers company, and also ... two new British colonies named after him - Southern and Northern Rhodesia. Very soon, there were more “come in large numbers” than the Boers, and they ... began to demand for themselves the rights of local citizenship, the same as those of the Boers, and the abolition of high taxes for foreigners ... 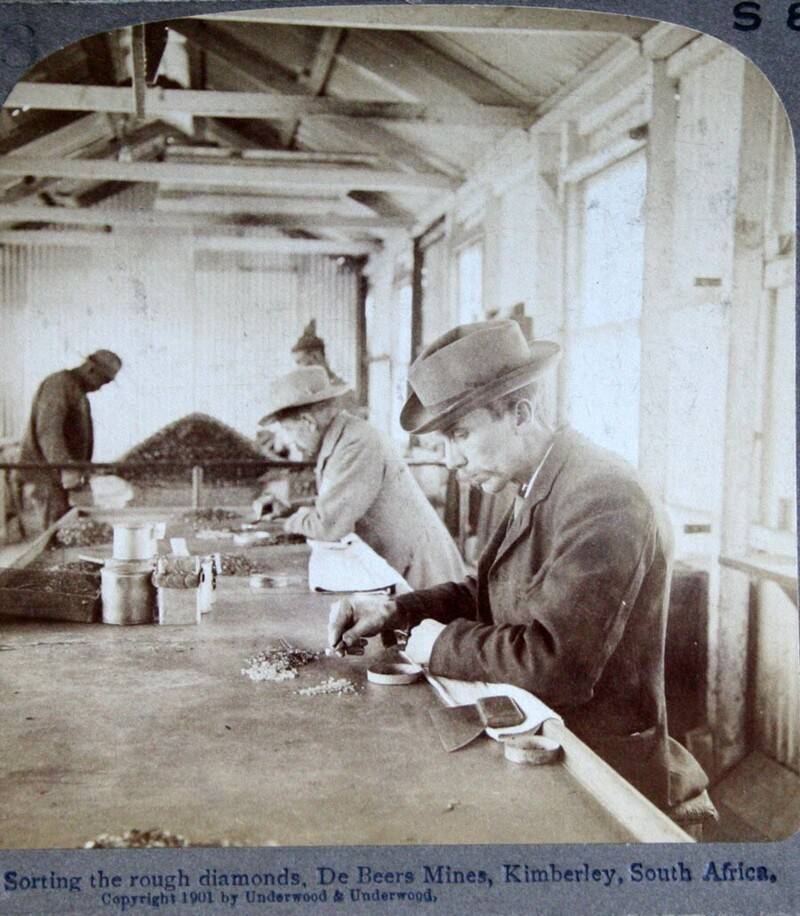 Sorting of diamonds. De Beers Company. Kimberly. South Africa. Photos of those years
A human rights "Reform Committee" was formed, funded by Cecil Rhodes and other diamond miners. Moreover, the “come in large numbers” (they were called Uitlanders) demanded citizenship in the Transvaal, but at the same time they did not want to renounce their British citizenship, that is, they essentially advocated dual citizenship, which no local government likes, since it immediately creates many dangerous precedents . As a result, Britain annexed the diamond-bearing lands in 1871, and annexed them to the Cape Colony. 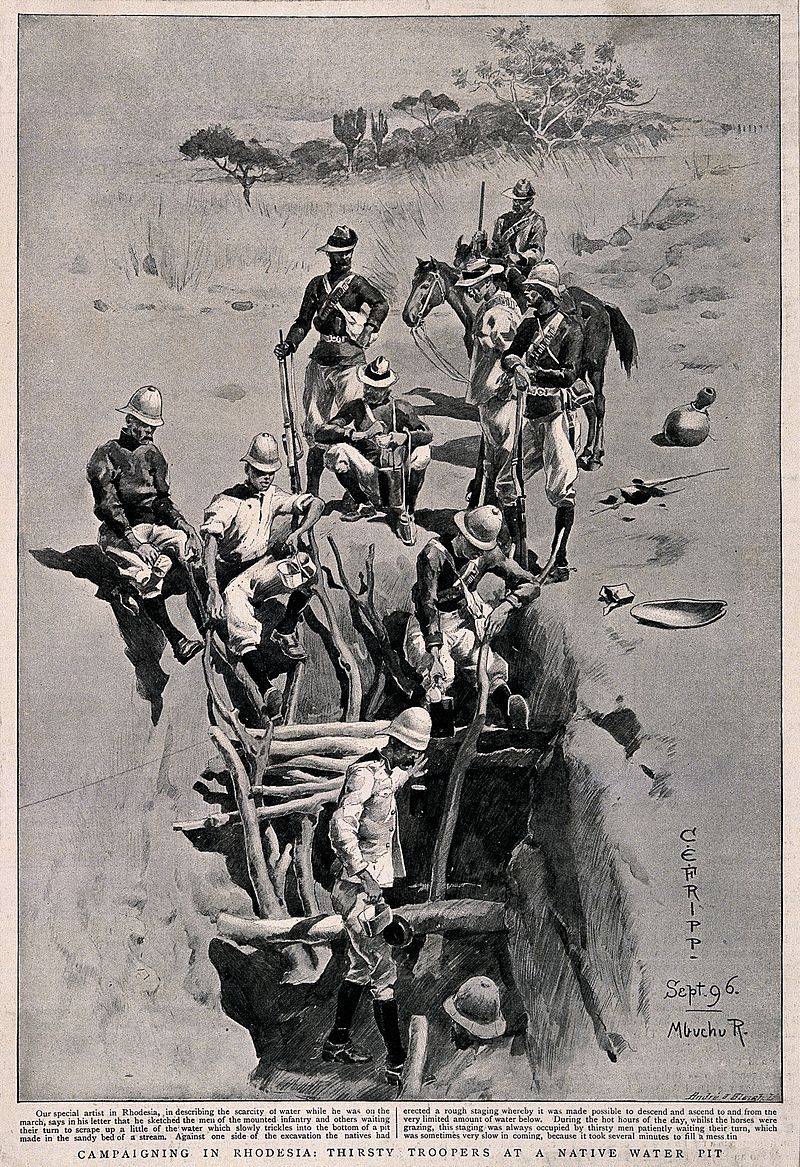 English soldiers are digging a well. Charles Edwin Fripp
And then in February 1886, in addition to diamonds, gold was also found here.

Moreover, the gold mined in the Transvaal, although it went to London banks, the British Treasury did not receive a penny from the Transvaal gold mines. Everything went into private hands, because it was mined privately on the territory of completely independent republics and it was possible to dig it there like clay! As a result, about 40% of the total world supply of this precious metal was soon mined here! 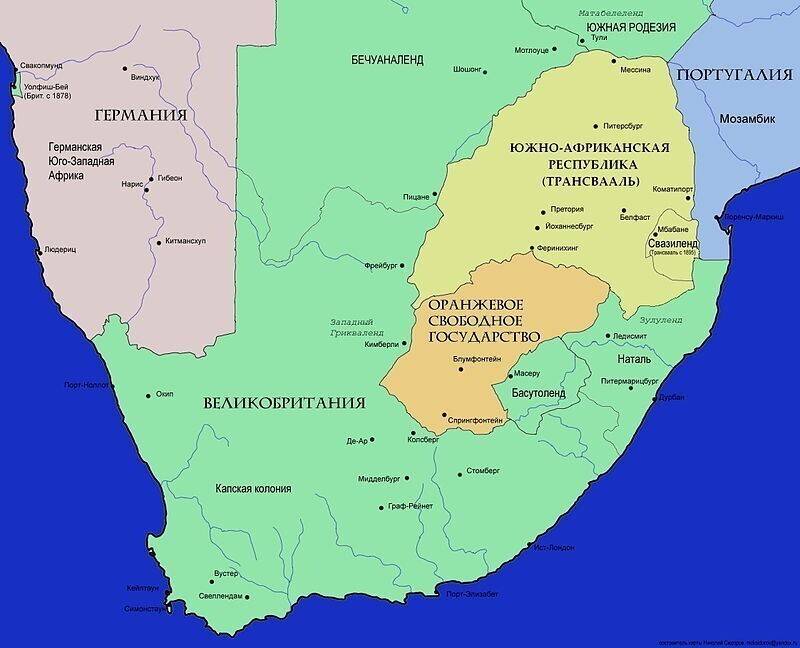 Map of the Boer states and British possessions in South Africa
Well, where there is a lot of gold, there will always be many hunters to lay their hands on it. And this means that gold, violence and war go hand in hand ... However, it should be noted that the First Boer War took place even before gold was found here, and it lasted from December 16, 1880 to March 23, 1881 But this and other events preceding the fight of 1899-1902 will be told next time.