"The fight was terrible." Defeat of the Trinity Battalion in the Battle of Sultan-Buda 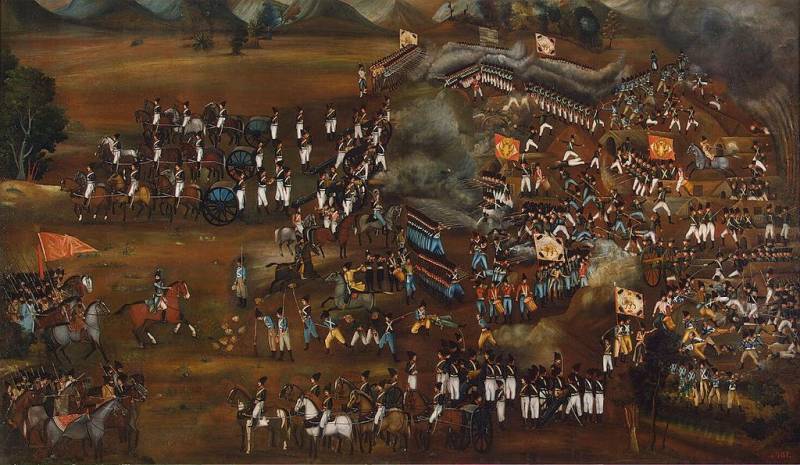 The painting depicts the defeat of the battalion of the Trinity Infantry Regiment of the Russian army on February 13, 1812 near Sultan Buda. On the left side of the picture at the head of the Persian army in a blue robe is Abbas Mirza. With his right hand, he points to the severed heads of the enemy. In the center of the picture on horseback is an English officer. On the right side of the canvas, a battle is shown that took place in the Russian camp. Russians (under banners with a double-headed eagle) are surrounded by Persians (under banners depicting a lion holding a saber in its paw against the backdrop of the rising sun). The picture was part of the decoration of the castle of Abbas-Mirza - Ujan. In 1828, the painting was taken by the Russians as a trophy to the Winter Palace in St. Petersburg.
210 years ago, the Persian army of Abbas-Mirza invaded the Karabakh Khanate and defeated the 3rd battalion of the Trinity Infantry Regiment of the Russian army in the battle of Saltan-Buda. Most of the battalion fell in a fierce battle with an entire enemy army, the rest surrendered.


All Russian troops in the Caucasus were outraged by the surrender of the battalion of the Trinity Regiment.

“I could not believe that the Russians would surrender without the most extreme.”

The Russian-Persian war of 1804-1813 was caused by the desire of Persia (Iran) to restore its dominance in the Caucasus.

The Russians annexed Georgia and part of Azerbaijan, which the Persians considered their patrimony.

England stood behind Persia, which spoiled Russia wherever it could - in the Balkans, in the Baltic states, in the Caucasus, in Persia, etc. Then, when the Russian Tsar Alexander Pavlovich quarreled with France, the French began to incite Persia against us.

In May 1804, Persia, in an ultimatum form, demanded the withdrawal of Russian troops from Transcaucasia.

In the summer of 1804, hostilities began.

Because of the mistakes of St. Petersburg, Russia was completely tied up in Europe, so it could not allocate enough forces to quickly close the issue.

The war dragged on, but, thanks to our commanders, officers and valiant soldiers, on the whole it was victorious. Our troops acted with small forces, but the Persians, who were helped to create a regular army with artillery by the British, were beaten in the main battles. In 1806 Gudovich's troops took Derbent, Baku and Cuba.

When the war with Turkey began, Gudovich concluded a truce with Iran, but peace negotiations did not lead to success. Under the influence of France, and then England, Feth Ali Shah continued the war.

The organization of the regular Persian army according to the European model was carried out by French military advisers who arrived in Tehran in 1807, headed by General Gardan.

At the same time, the Russians in the Caucasus also had to fight with the Turks (1806–1812). Russian troops occupied Etchmiadzin, laid siege to Erivan, defeated the army of Abbas Mirza and captured Nakhchivan. Erivan failed to take.

In 1808, the new commander-in-chief Tormasov resumed negotiations with Persia. During the negotiations, the Persians suddenly invaded Georgia, but were defeated.

In 1809-1810, the Persians tried several times to invade our borders, but were defeated. 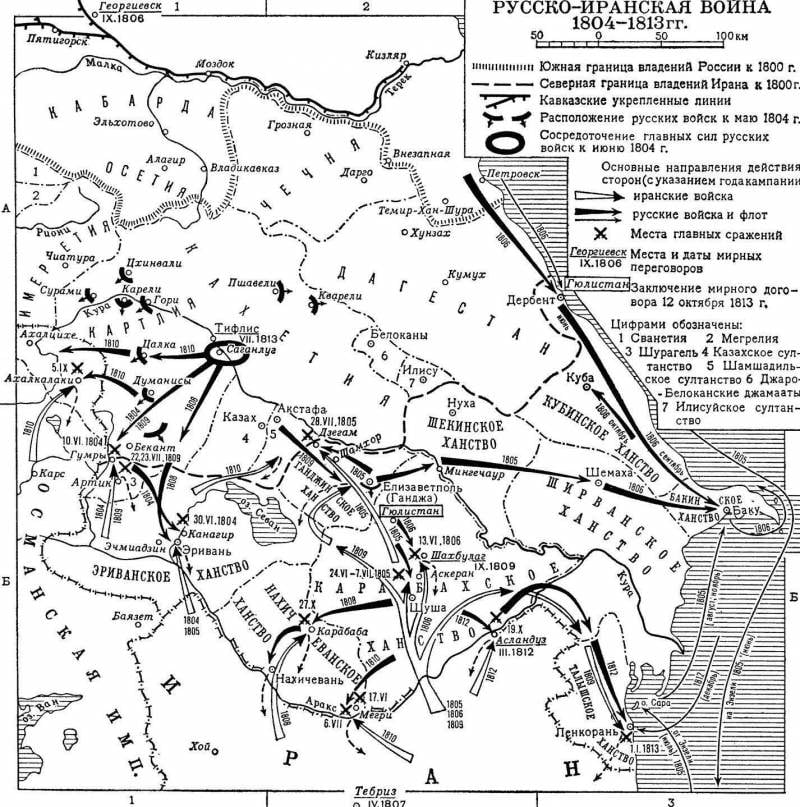 In 1811, the Persians, with the help of British military advisers, strengthened their army.

Instead of Tormasov, the Russian troops were led by General Paulucci, in 1812 he was replaced by Rtishchev.

The situation in the Caucasus by 1812 was difficult. The proximity of the war with Napoleon diverted all the forces of the Russian Empire to the Dvina and Neman, part of the army was located on the Danube direction against Turkey. There were very few troops left in the Caucasus, and they did not even think about the offensive.

Petersburg again tried to negotiate with Persia, but without success. The demands of the Persians were excessive. Abbas Mirza relied on an army of 30 organized and armed by the British.

Knowing about the weakness of the Russians in the Caucasus and their problems, the Persian command was sure that this time it would achieve victory and drive the "infidels" out of the Caucasus.

Abbas Mirza wrote in his proclamation:

“... Now our sarbazes (regular infantry of Persia - author's note), like hungry lions, crave the blood of the Russians who are in Georgia, and as soon as we move there, Georgia will be subdued and the Russian commander in chief and his soldiers will be killed or captured.”
At the forefront in the Karabakh Khanate was the battalion of the Trinity Regiment (560 people), quartered in the winter residence of the Karabakh Khan Sultan-Bude. Three companies of the 17th Jaeger Regiment were based in Shusha.

Scouts and well-wishers reported that a large Persian army was preparing to invade. However, the battalion commander of the Trinity Regiment, Gini, treated his direct duties negligently and did not prepare to repel the attack.

As a result, our soldiers met vastly superior enemy forces in open areas.

The Persian command was reinforced by British officers and non-commissioned officers.

One corps of 18 headed by Abbas-Mirza himself went to Sultan-Buda, the second corps - to Shahbulag (Shah-Bulakh) in order to intercept the messages of the Trinity Regiment with Shusha.

At the first news of the appearance of the enemy, 2 companies with 1 gun under the command of Captain Ilyashenko came out of Shusha to help the Trinity Battalion. But in the Shakhbulag region, the Russian detachment was blocked by masses of enemy cavalry. The huntsmen paved the way with bayonets along the Shahbulag fortress, but they could not go further. All roads and heights were occupied by large enemy forces. 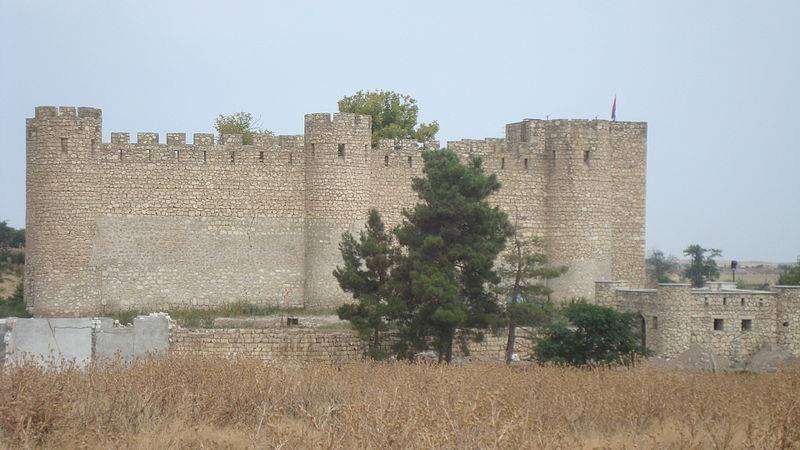 Major Gini built a battalion in a square in front of the dugouts, he was supported by 2 guns. They were assisted by a small cavalry detachment of Mekhti-Kuli of Karabakh.

The Persian cavalry fell upon the square.

Our soldiers steadfastly repulsed one attack after another with the support of 2 guns.

First, the enemy suppressed the Russian guns. One gun was knocked out, then the ammunition flew into the air, and the second gun fell silent.

The battalion began to suffer heavy losses from enemy fire.

The Persians continued their attacks. There were fierce hand-to-hand fights between the dugouts.

Later, Mehti-Kuli Khan, in his report to the Marquis Paulucci, noted:

“The fight was terrible, such as never happened. Our army, soldiers, cavalry and sarbazes of Abbas-Mirza and my subordinates did not stop killing for 7 hours…”
Olovyashnikov with a bayonet attack was able to repel another onslaught of the enemy and held his position.

By evening, the Persians were tired and retreated.

But the situation was hopeless: heavy losses (300-343 killed), ammunition almost ran out, and the remnants of the battalion were blockaded.

Surrender of the battalion. The retreat of the Persian army

The Persian commander-in-chief Abbas Mirza sent a truce and offered to capitulate.

Mekhti-Kuli-Khan offered to make his way to Shahbulag under the cover of night or to gain a foothold in the forest, where the enemy cavalry would not be able to act and there would be shelter from enemy cannons.

At this time, Abbas-Mirza sent a letter again, threatening that all the soldiers would be massacred.

“Olovyashnikov was already exhausted under the yoke of difficult circumstances and did not find in himself a sufficient supply of moral strength to decide on such a desperate feat.”
Meanwhile, Mekhti-Kuli with several soldiers successfully left the camp, fled to the mountains and reached Shushi. Not wanting to surrender, non-commissioned officer Timchuk and private Fedotov also fled from the camp, who independently reached Elizavetpol.

That is, the remnants of the battalion could well have escaped in hard-to-reach terrain.

At night, Olovyashnikov agreed to surrender, provided that the lives of his people were saved. On February 2 (14), the remnants of the battalion surrendered, handing over the banner. It was the only Russian banner that adorned the palace of the Persian Shah. In autumn, 52 soldiers escaped from captivity.

The Persian army continued the offensive and on February 3 (15) laid siege to Shahbulag, where Ilyashenko's huntsmen settled. Preparations for the assault began. Having shown the captured Russian soldiers and their banner, the Persians suggested that Ilyashenko also lay down weapon. Gave me time to think.

At night, Russian soldiers, with the help of local guides, left along the mountain paths. Ilyashenko's companies successfully reached Shusha. The Russians prepared for the siege.

The detachment of Kotlyarevsky (about 1,5 thousand people) moved in a forced march to Karabakh.

On February 21, the Russians were in Novaya Shemakha and moved towards Zardob. Along the way, Russian troops smashed irregular bands that scattered around the area and robbed the villages.

Abbas-Mirza did not dare to fight with Kotlyarevsky and retreated behind the Araks.

Thus, the invasion of the Persian army did not have any important consequences.

In the course of the further campaign of 1812, Kotlyarevsky will defeat the Persian army, and Iran will have to recognize the Russian conquests in the Caucasus.

But the Russian army was outraged by the surrender of the battalion. After all, "Russians don't give up."