In Defense of Emperor Paul I

23 September 2012
44
In Russian storiesrather, in its coverage there is a whole set of stamps and, as a rule, no one tries to challenge these stamps. They are perceived as an axiom, as something that does not require proof. Especially a lot of cliches in the evaluation of the activities of the Russian tsars and emperors. For example, Peter I is an extremely positive person, Anna Ivanovna is negative, Catherine II is positive, and so on. 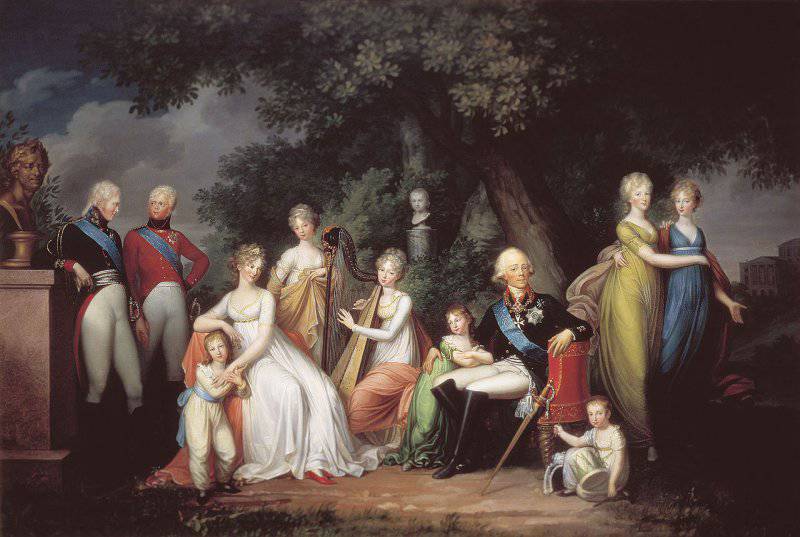 Pavel I, Maria Fedorovna and their children. Artist Gergardt Kügelgen

1) He was a petty tyrant, a scoundrel, mocked people, punished for minor offenses or for nothing; everything in his reign was bad;
2) Thank God that the Russian patriots killed him and he did not have time to cause a lot of misfortune to the Russian people.

But what is alarming:

1. He took the throne at the age of 42, i.e. sufficiently lived and knowledgeable person.

2. Almost the first emperor who legally occupied the Russian throne.

3. Not a single law, not a single provision established by Paul I was repealed by his son Alexander I, and most of the laws developed by Paul and introduced by him existed until the 1917 year.

This is the third point of my doubts that prompted me to study more closely the era of Paul I. And here is what I discovered.

"The army of Empress Catherine II is a more irregular crowd than a properly arranged army. A lot of abuses flourish in all branches of troop control. Most senior generals live in the capital permanently, leaving troops to their headquarters. Many officers live on their estates, giving it back his salary to his commanders.

Soldiers who know the craft constantly live and work in the estates of their superiors. I counted up to 50 thousands of such missing soldiers. The Life Guards Preobrazhensky Regiment consisted of 8 colonels, 26 lieutenant colonels and 6 thousands of noncommissioned officers of the nobles on 3 and a half thousand privates. But every day in the regiment I see only one major, several clerks. "
Why no one pays any attention to the custom established under Catherine II to record newborn noble sons with soldiers in the guard regiments. These nedorosli, not serving a single day in the ranks, to the 16-17 years received the rank of Guards lieutenants?

What changed Paul I in the army?

Is everything that he did to the detriment of the army and Russia? Here are just a few indisputable facts that say otherwise.

1. Paul introduced the real disciplinary and criminal liability of officers for the preservation of life and health of soldiers.

3. He regulated the corporal punishments of the lower ranks, emphasizing that "... they should be allowed in extreme cases, bearing in mind that they serve to correct negligent soldiers, and by no means for their mutilation."

4. For the first time in Europe, he introduced the award of the lower ranks with the insignia of the orders of “St. Anna” and “Donat of the Order of St. John of Jerusalem”.

5. He dismissed from the service all the lower ranks of the nobility, who were listed on the shelves, but who were on long vacations.

6. He ordered that all newly opening officer vacancies be occupied only by graduates of military schools or experienced noncommissioned officers from nobles who had passed literacy examinations and knowledge of the statute.

7. He forbade officers and generals to leave more than one month a year.

8. Introduced holidays to the lower ranks on 28 days a year.
9. For the lower ranks, he introduced a woolen overcoat with sleeves for winter and cold time for the lower ranks (until that time, the soldiers had only a uniform for all seasons, under which they would hook who could). Soldiers wear this piece of military clothing to this day!

10. Introduced for winter time for sentry guard sheepskin coats and felt boots, and in the guardroom, felt boots should be as much as required for each change of sentry clothes to wear dry felt boots. This rule of guard duty exists today !!

11. He fired an officer from the 333 service and an 2261 officer who failed to answer elementary simple questions about military affairs.

12. He ordered that only those who passed the medicinal exam at the Medical College were allowed to join the regiment by doctors.

13. Under the penalty of hard labor, he forbade him to make deductions from the soldiers 'wages and, on pain of death, not issuing soldiers' salaries.

14. Established hospitals with each regiment.

15. He introduced retired soldiers who left the service because of injuries or soldiers who had served more than 25 for years with the maintenance of such soldiers in mobile or garrison disabled companies.

16. He ordered the dead and dead soldiers to bury with military honors, to hand over the graves for the care of the disabled garrison companies.

17. He banned the production of non-commissioned officers illiterate.

18. He forbade the use of soldiers as a labor force in officers 'or generals' estates.

Who left us the written evidence of the era of Paul I, on the basis of which we are today the Emperor, who has done so much for ordinary soldiers and ordinary people? Are not those - generals and nobles, of which Paul was out of service because of unsuitability? Paul, like Peter I, demanded the nobles of serving their state. Could the king survive, encroach on the freedom of the nobility, put all the military service on the fragile shoulders of the noble children?

I just want to wish everyone who studies military history not to believe the authorities, but to get to the primary sources. Then the most interesting things open up, many historical moments appear in a different light. Only it is very painful to part with illusions, it is very difficult to think. After all, everything was so simple and clear. I memorized from the textbook - it’s white, it’s black, it’s ours, it’sn’t ours and you don’t need to think. And you begin to understand, to think, and history appears in such a chaos of colors that it becomes somehow uncomfortable, the firmament begins to falter.