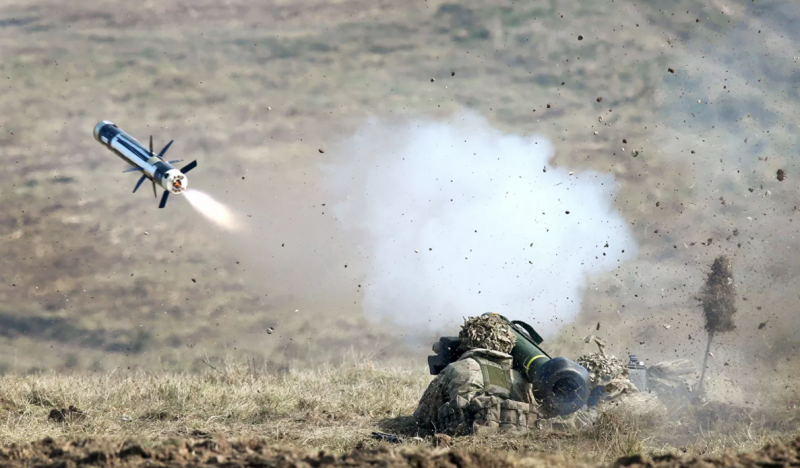 After Ukraine reported at the end of last year that the Armed Forces of Ukraine used American Javelin anti-tank missile systems (ATGMs) during the fighting in the Donbass, a discussion began among politicians, experts and bloggers: how formidable is this? weaponHow dangerous is it for tank units of the People's Militia of the DPR, and what can the People's Militia of the LDNR oppose to it?


Judging by the statements made by the official representatives of the NM of the LPR and the DPR, one might get the impression that the Javelin ATGM is not a threat at all, they say, the degree of danger is low.

For example, on January 27, the head of the People's Militia, Yan Leshchenko, said that the threat from American weapons was "insignificant." According to him, if the new anti-tank systems are used by the Ukrainian army, then only in certain sectors of the front, and the presence of Javelins on the line of contact is mostly a propaganda function.

Other officials of the republics and bloggers commenting on the situation in Donbas spoke in the same spirit.

Some experts, positioning themselves as military, even demonstrated ignorance of the technical characteristics of anti-tank systems.

For example, in some publications you can find expert statements that "the effectiveness of the Javelin starts from a distance of 2-2,5 kilometers from the target", while in reality the minimum firing range of the Javelin anti-tank systems in the "attack from above" mode is 150 meters, and in the "direct attack" mode - only 65 meters.

Data on the technical characteristics of Javelin is in the public domain, but, apparently, not everyone bothered to get acquainted with them.

True, there are those who spoke more specifically on the topic, such as, for example, the head of the Bureau of Military-Political Analysis Alexander Mikhailov, who noted that if Russian armored vehicles can withstand the Javelin, then for the outdated armored vehicles of the DPR and LPR, strikes from such complexes will bring big losses.

Regarding the readiness of the armies of the republics to resist the Javelin anti-tank systems, Andrei Marochko, Lieutenant Colonel of the LPR People's Militia reserve, spoke most interestingly. In a commentary to Moskovsky Komsomolets, he said that in the republic they thought a lot about how to reduce the effectiveness of the use of American anti-tank systems by Ukrainian troops and what countermeasures to use, and as a result, they worked out some options that cannot be discussed, because this is an important state secret. But, as Marochko promised, "the results hoped for by the Ukrainian military will disappoint them."

What kind of secret countermeasures these are, no one, it seems, even in the People's Militia itself knows.

A person who is unfamiliar with the real military situation in the Donbass, who has read all this, may get a misleading impression that the Javelin is not very dangerous for the armies of the LPR and DPR. Among users of social networks, this opinion is quite common - they say that in the hands of drunken fools from the Armed Forces of Ukraine, who cannot be trusted even with a machine gun, American anti-tank systems are not very dangerous.

And here the question arises - how much does all of the above relate to reality?

And what can the NM LDNR oppose to the Javelin ATGM?

In order to answer the question, what, in fact, the People's Militia of the LDNR can oppose to the Javelin anti-tank systems, you first need to understand the state of the tank forces of the armies of the republics now.

And here the illusions are collapsing on the rocks of harsh reality.

The results of the use of Javelin anti-tank systems by the Armed Forces of Ukraine in the event of a Ukrainian offensive will really disappoint the Ukrainian command, because at the moment there are practically no combat-ready tank forces in the People's Militia.

When a separate tank battalion, personally subordinate to the corps commander, cannot field a single serviceable tank on alert, this is an “achievement” of almost eight years of the Minsk agreements.

When the unemployed throughout the city are caught in the tank battalion of the 4th Motorized Rifle Brigade, based in Alchevsk, and, not having caught the required number, they begin to transfer people from other units there - this is also an “achievement”.

If a couple of years ago, the line of combat-ready tanks and crews in the tank battalions of the motorized rifle brigades of the NM of the LPR and DPR was 25–30%, now this is already in the past - now the bar is probably somewhere in the region of 10–15% of vehicles capable of leaving outside the fleet of vehicles and successfully hit the enemy tank.

A tanker is a very expensive soldier. Training a tanker is the consumption of the motor resource of the tank engine and its running gear, the consumption of the resource of a tank gun, which is written off after a couple of hundred shots. This is diesel fuel, spare parts, these are competent commanders-teachers who, together with him, will go through the entire tank piece by piece, explain how everything works in it, how to properly handle what.

It is not enough to pay an expensive soldier - it means, one way or another, to lose him. If a tanker, who, in the case of competent training, is a highly qualified technical specialist, receives the salary of a simple military watchman guarding a warehouse in the deep rear, without combat allowances, only because the tanks in the republics are withdrawn to the rear and do not fight, then what will we get after some time such a policy?

We will get almost all literate and brave warriors, potentially ready (both in terms of knowledge / skills and motivation) to be tankers who have transferred to the infantry of line battalions and armored personnel carriers, where they will fight and receive a salary that they can normally provide for their families against the background rising prices in stores.

Tanks are infrastructure, a training and repair base, a huge number of competent and motivated technical specialists. This, unfortunately, does not exist in the republics, the rudiments of this were killed and crushed, and it will be formed anew, if it happens, already in the course of the “big fight”. With traditional failures for such processes and offensive senseless losses.

It seems that the leadership of the LNR and the DNR does not care much about the question of "how the republics will resist the Javelin."

Because, as a rule, this “counteraction” is organized by people who have no idea about the tactics and technique of the combat use of this ATGM and have not even read the instructions for it, which have been in the public domain for a long time, for many years.

They will puff out their cheeks and publish tales on the Internet that are not related to reality - "we have such devices that we will not tell you about." This may affect the Russian layman, but in the LPR and DPR everyone knows everything about everyone, because everything is in plain sight.

Therefore, even now, for people familiar with the real state of affairs in the People's Militia of the LDNR, it is obvious that without Russian military assistance, the republics will have nothing to oppose to the Javelin missile systems, which in fact have a high degree of danger.