John Stemple's collapsible weapons: everyone has their own hobby ... 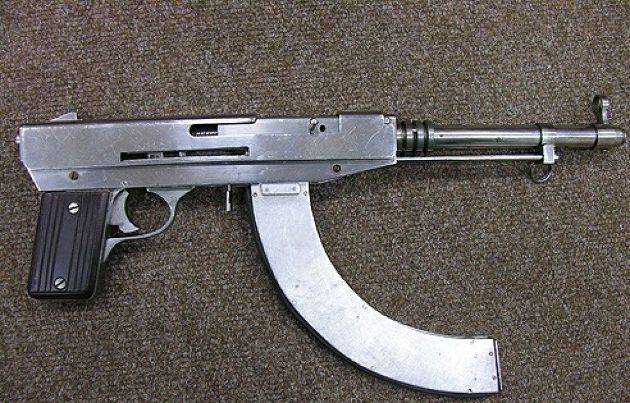 "... lead us not into temptation, but deliver us from the evil one."
Gospel of Luke 11:4
Weapon and firms. Probably everyone heard (and people who lived during the Soviet era heard for sure) about the gang of the Rostov Tolstopyatov brothers - raiders-"phantomas" who robbed savings banks and ... built a lot of original home-made weapons for their gangster affairs, including even a "ball machine", firing balls from ball bearings loaded into homemade cartridges. There is a story on the Internet that one of the brothers tried to contact the Ministry of Defense through the newspaper in order to forgive him for the “deeds” he had committed, if only he would be given the opportunity to work on new types of small arms. There is another legend that the machine he created delighted specialists, but ... too late, they say, "the train left." Actually, there was nothing to admire there - because a submachine gun, it is a submachine gun, but one could be completely surprised. After all, people showed such resourcefulness and ingenuity. Another thing is that there is something to think about. There have always been and are people who, for a number of reasons, have not received a specialized education, but who, again for various reasons, are “drawn in the wrong direction.” And what about these? To support, to provide opportunities further ... to "deepen" or to nip in the bud, especially if such people are drawn to the creation of weapons? Well, how things stand with us, we all know this very well. But how is such a thrust realized in people across the ocean? Today, our story will be about one such example ... 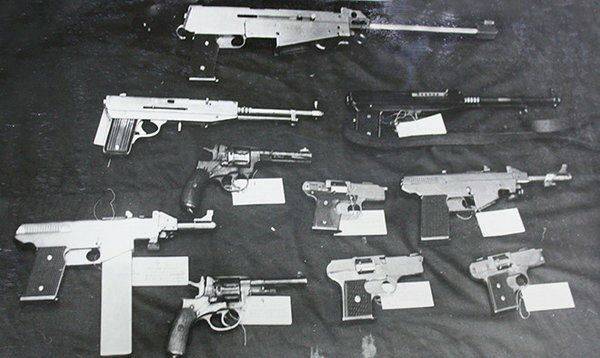 Homemade weapons of the Tolstopyatov brothers. Photo: https://123ru.net/mix/193178580
And it so happened that in 1985, a certain John Stemple from Ohio opened his own small arms business: he began to rivet primitive submachine guns in his workshop, like two drops of water similar to the Smith and Wesson M76, which in 1967 this the company copied from the Swedish submachine gun "Karl Gustav" m / 45 - the only difference was that Stempl used in his crafts not a nine-millimeter Luger cartridge, like the Swedes, but along with them "Smith and Wesson", but so beloved by the Americans .45 ACP. 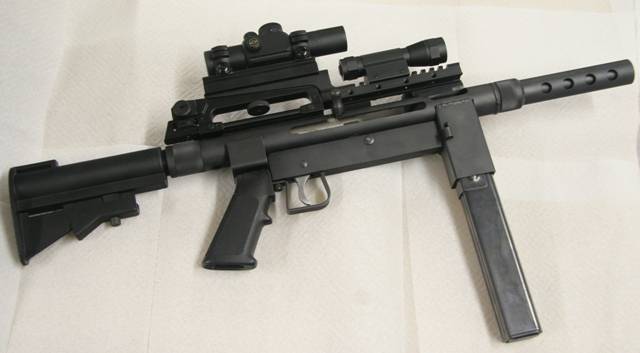 Stempl 76/45: the pattern that started it all. Photo BRP Corporation
The submachine gun, proudly (and very honestly) named by him "Stemple" 76/45, had the simplest automation - that is, with a blowback, 100% taken from the Swedes. Shooting was carried out with an open shutter and only automatic fire. There was no separate manual fuse, but, like on the German Schmeiser, the bolt in the open position can be locked by sliding its handle into the L-shaped groove of the receiver. 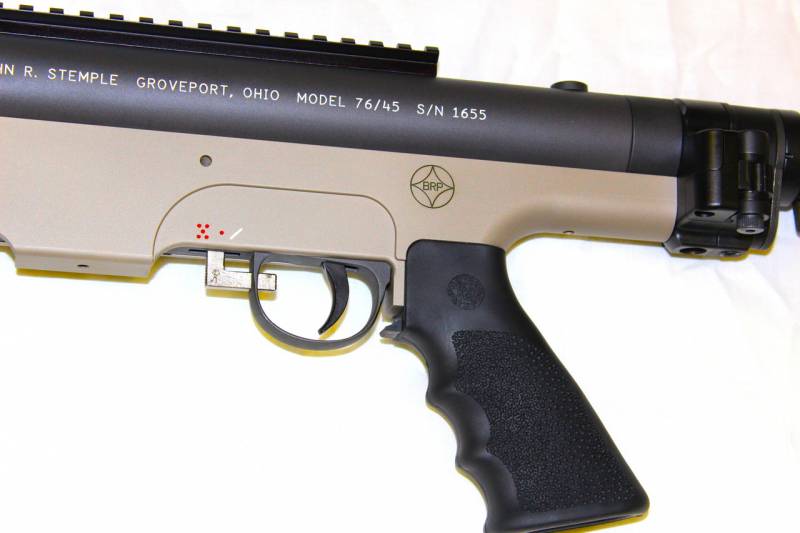 Receiver. “Elegance itself…” Photo by BRP Corporation
The receiver itself was made of steel and had a cylindrical shape. From below, a receiver for the magazine, the base of the pistol grip were welded to it, and from above - the simplest sights without any adjustment. Butt - "skeletal structure", folding sideways. Stores for it could be used from the American M3 submachine gun. 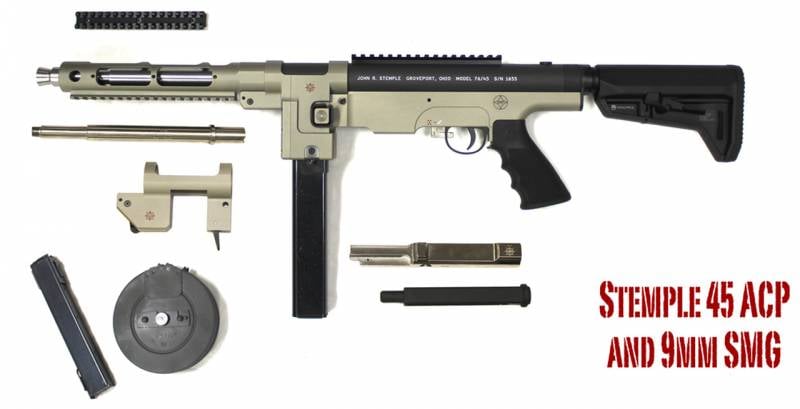 "Stempl" 76/45 (STG) and parts for two models at once in two calibers. Photo BRP Corporation
It was produced exclusively for the US civilian market and was, in fact, a real gangster weapon. And everything would have been fine with him if in May 1986 the United States had not adopted a federal law (Firearms Owners Protection Act of 1986), known as FOPA'86, which, in particular, banned the manufacture of new automatic weapons for civilian turnover. And Stemple's business would have immediately collapsed, if not for one "but". The fact is that since the creation of this submachine gun in 1985 and until the entry into force of the new law in May 1986, John Stemple managed to manufacture and register about 2000 receiver boxes for him. And in the United States, the only part of the weapon that is subject to accounting and registration is the receiver - the receiver. And since the law does not have retroactive force in the United States, then ... it turned out that he had every right to use all of his registered receivers. That is, to create on their basis all the same old "Stemple" 76/45 and sell them legally, without entering into any conflict with the law!

"Stemple" 76/45 (STG). One of the "configs". Photo BRP Corporation
And yes - after 1986, Stempl continued to assemble submachine guns of his own design based on previously registered receiver boxes, and produced about 1000 units of such weapons. But further, namely in 2003, a small company BRP Corporation, Georgia, bought most of the receivers from him, and in close cooperation with John developed the original STG76 system (STG - Stemple Takedown Gun or "Stemple's collapsible weapon"). What is the essence of this innovation? 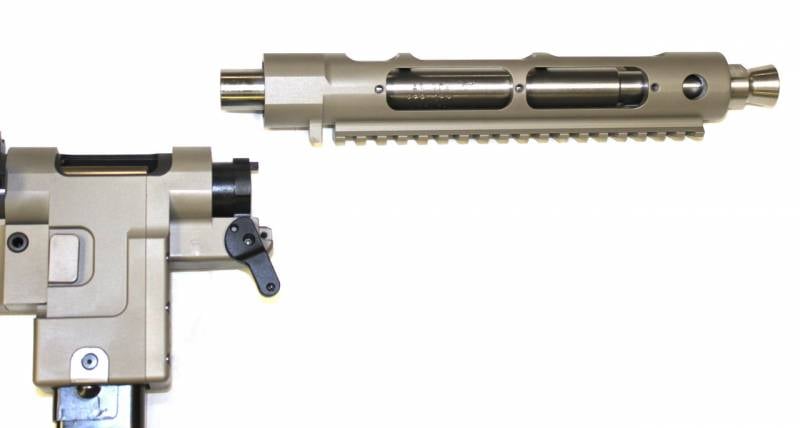 Stem attachment. Photo BRP Corporation
It’s just that in this way they got a kind of “set”, which, thanks to the presence of the original receiver of the Stempla system, can be turned into weapons of various configurations, using elements of various systems as “cubes” for assembling, starting from the Suomi submachine gun and up to the AR-15 carbine and even the MG34 machine gun. As such, "new" STG76 submachine guns continue to be on civilian sale until the manufacturer runs out of stock of Stemple's original registered receivers. Naturally, when they run out, Stemp 76/45 and STG76 will no longer be produced for the civilian market. And this automatically translates all these samples into the category of weapon curiosities, which also automatically increases their price and ... demand among amateur collectors! 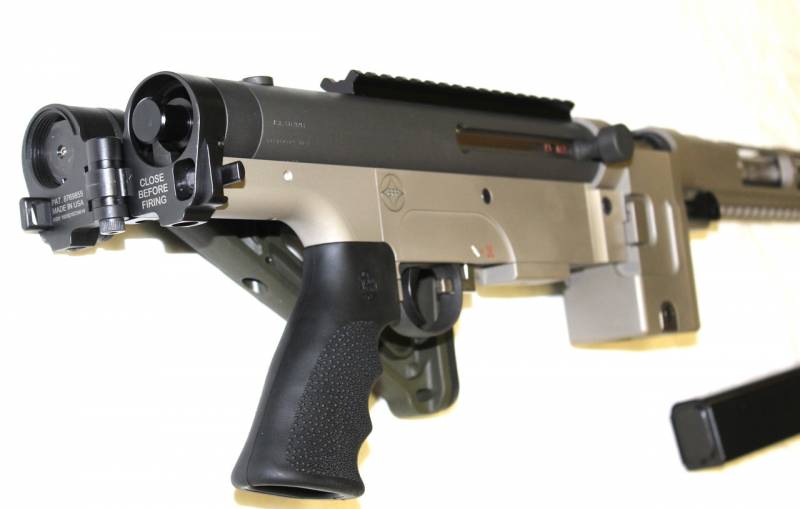 Folding example. Photo BRP Corporation
That's how just one single serial number, stuffed on just one metal part before the change in the law, made this cheap submachine gun not only completely legal, but also turned it into a "source" for weapons design.

Without "Pikattini" now nowhere! Photo BRP Corporation
Today, one of the most popular options for such a design is the “a la Thompson” submachine gun, inside which the original receiver from “Stemple” is hidden, which allows this “remake” to fire bursts completely legally. Moreover, although the base Thompson has a fire switch for firing single shots, on its alternative model this translator is a purely decorative detail, and it can only fire in bursts.

STG 34k 2018 Photo by BRP Corporation
In 2007, John Stemple died at the age of 57, and now the BRP is functioning without his participation. However, it should be noted that he lived long enough and was patient enough not to sell all the spare parts immediately after the closure of the company, but to wait until several thousand dollars could be asked for a “legal” submachine gun of his design. Although, in principle, there is nothing special about this weapon - the most primitive welding of finished components and parts, and that's it. That is, it is just pure design. But… dear! For that STG 34k based on the German machine gun MG34 today they are already asking for $ 13! But there are samples and more expensive ... 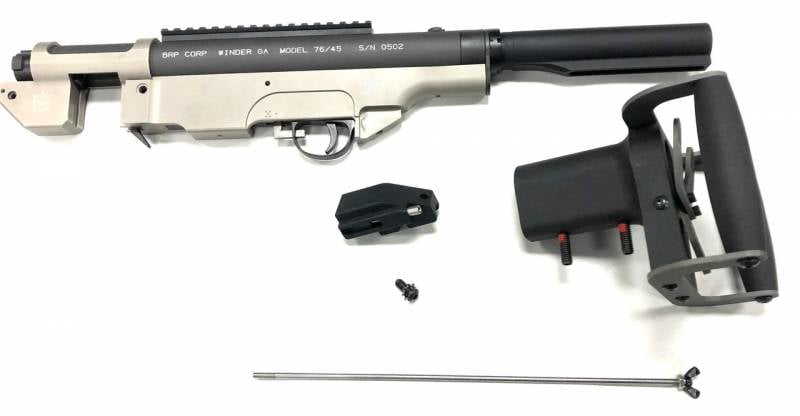 With an elegant movement, this "machine" turns into ... an easel machine gun! Photo BRP Corporation
In addition, the company also promises a number of unique USPs, such as: this is a simple and reliable design, so these submachine guns are very difficult to break and very easy to repair. The blowback allows them to fire long bursts very smoothly. Due to the fact that the .45 ACP submachine gun has a long bolt stroke, and even a hydraulic buffer, it has minimal recoil when firing in fully automatic mode. And there is nothing in this PP that cannot be easily replaced. All parts that may wear out can be easily replaced without going to a repair shop. 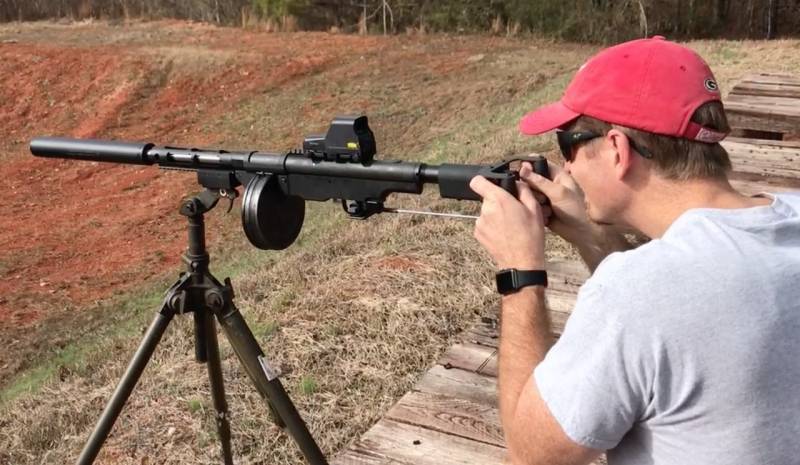 And this is how this machine gun looks in a firing position. Photo BRP Corporation
The worst thing that can happen to this submachine gun is damage or breakage of the receiver, which is completely unlikely. All other parts that may wear in STG configurations are not subject to registration. In addition, the company reports that it has a lot of spare parts and offers free service. 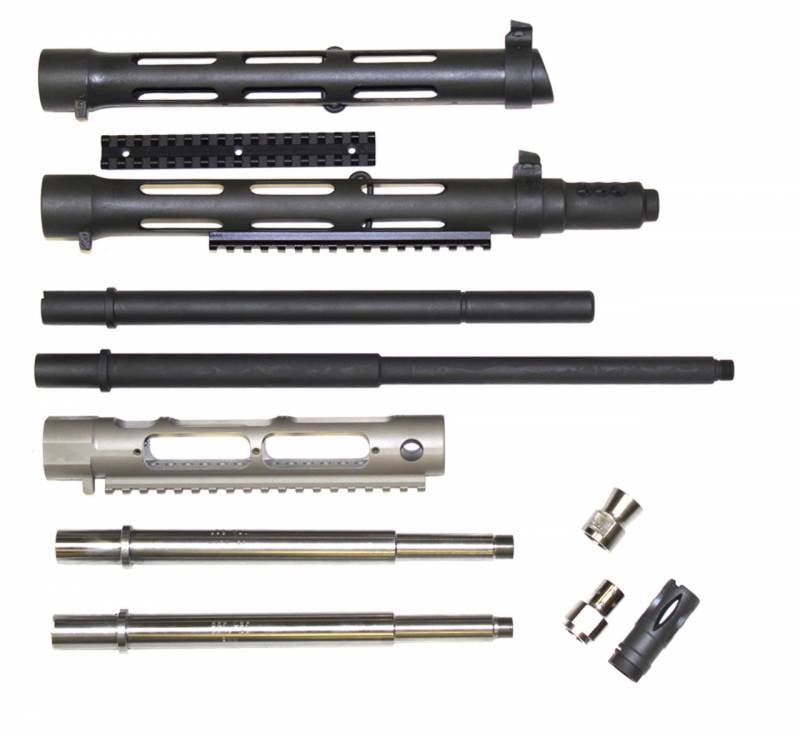 Want black parts, want white… Photo by BRP Corporation
Another important USP is the versatility of the STG76: for example, if you have a STG 7,62 submachine gun in 7,62x25 caliber, a set of Suomi 9 mm parts will allow you to easily change a smaller caliber to a larger one! 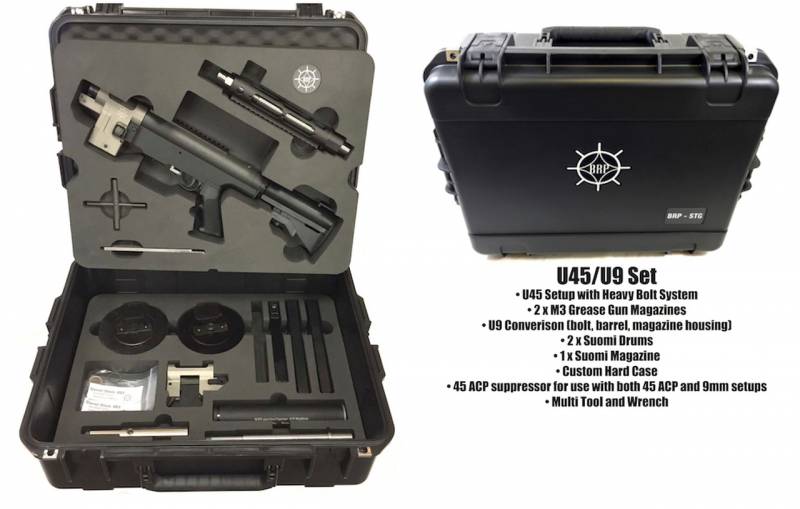 Kit (STG) U45-U9SF with suppressor. This is both a flame arrester and a silencer at the same time. I bought myself such a case and shoot for health. Wherever you want and whoever you want! Basically… Photo by BRP Corporation
It's also a very fast-firing weapon. So, STG34k with a blowback, similar to the Suomi M31, which provides a rate of fire of 750 rounds per minute. And besides, this sample has a translator for semi-automatic or fully automatic fire. 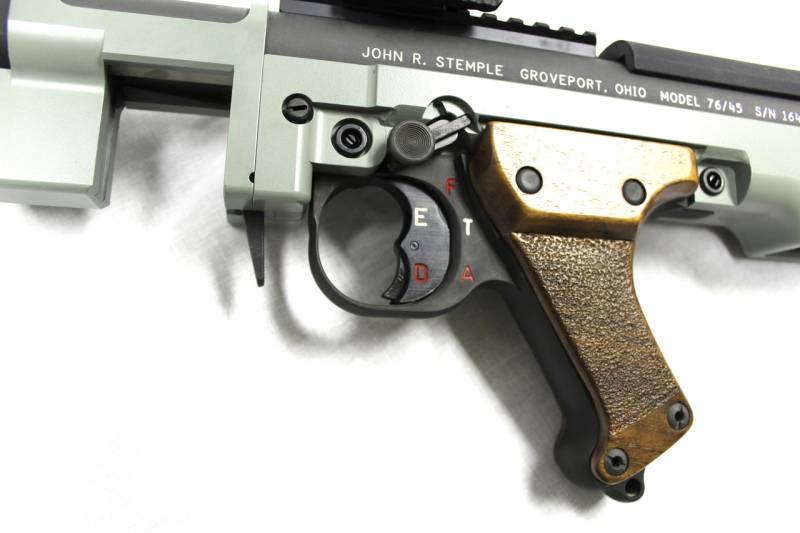 Almost like MG34! Photo BRP Corporation
Pressing the trigger in the upper position turns on the single shot mode; pressing on its lower part enables fully automatic fire. Moreover, this trigger can be easily attached to and removed from the 76/45 receiver.