Certain forces split the world along the North-South line 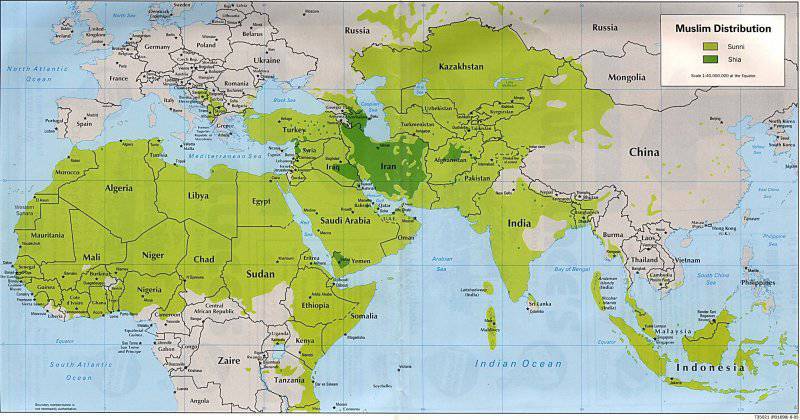 It is becoming more and more obvious that in the 21st century the main line of geopolitical confrontation runs along North-South coordinates. Do not have time to calm down the wave of anger caused by the American film about the Prophet Mohammed, provocative French caricatures in the weekly Charlie Hebdo, as their German colleagues are ready to join them. The German magazine Titanic is going to post an ambiguous collage on the cover with a certain Islamic warrior, who, as planned, should be the prophet Muhammad.

One event can be called an accident, two similar phenomena make you look at it closely. After a possible release of provocative material in the Titanic (the name of the German edition is also very significant), it’s just not necessary to talk about accidents. Obviously, this is a completely targeted long-term attack, which should lead to a serious crisis between the Western and Islamic civilizations, to split the world along the North-South line. Quite professionally everything is done to create a situation where there will be no turning back.

At the same time, for years, work was proceeding on dismantling the military potential of European countries (only the military potential of only one “security zone” - the United States) was maintained and increased, and the combat power of the Arab states was increasing. The population in most European countries turned into “vegetables”, people without will and with vague notions of good and evil. There are almost no passionaries in France, England, Germany, Sweden, Spain and other centers of Europe who would be ready to fight for the survival of their civilization and nation. Europe is flooded with powerful communities of Muslims from Africa, the Arab world and the countries of South Asia. They have kept their religion, traditions, tribal ties. Muslims have long disdained decaying white biomass in Europe, using it for their own purposes. Recently, however, the evolutionary process of the demographic, cultural conquest of Europe has developed into a revolutionary one. "The check is pulled out", and the bill went on for months and years, an explosion is inevitable. There is a serious work on rallying the Muslims. The countries of the Muslim world are already inundated with energetic young people who, except for hatred and war, do not know and do not know how.

Separate outbreaks of this conflict have already been noted across the globe: Albania - Kosovo - Serbia - Bosnia and Herzegovina - Macedonia - Greece; The Republic of Cyprus - the Turkish Republic of Northern Cyprus - Turkey; Armenia - Nagorno-Karabakh - Azerbaijan; Republic of Sudan - Republic of South Sudan. Obviously, we do not know the whole picture. However, it is clear that the top management structures of the West, having analyzed possible scenarios and variants of the systemic crisis unfolding on the planet, recognized that it was insoluble by peaceful means. A global “reset” of the matrix is ​​required. Such a tough start, which we are now witnessing in the world, suggests that the war in Iraq, Afghanistan, Yugoslavia, Sudan, Libya and Syria will seem to us in the future “flowers”.

Global conflict is inevitable. The only question is where the main front of the war will be. Perhaps it will be the countries and regions of the Islamic world. Therefore, Russia should pay close attention to the Caucasian and Central Asian fronts. And also to take into account the negative processes that are taking place in the Middle Volga region, external and internal enemies are trying to split the Russians and the Tatars (passionary core of Russian civilization). A great danger comes from the Asia-Pacific region. Japan in a critical situation can decide on a crazy offensive operation. The danger of war is on the Korean Peninsula. On the borders of China there are several conflict zones at once, which can lead to a significant regional conflict.

Apparently, we are witnessing how the world is creeping into the next stage of a (hotter and tougher) crisis. And events in Africa, the Middle East, South and Central Asia, Southeast Asia, the Far East, and Europe will be more and more connected with each other. The acceleration of events has begun, and this is an indisputable fact.

Europe can flare up, and very seriously. The "internal front" is no longer only in the Balkan Peninsula, but also in Great Britain, France, Holland, Belgium, Spain, Italy, Germany, Scandinavian countries, etc. The first "bells" have already rang - these are riots in France and England. The situation in France is already tense. Thousands of Muslims made it clear that they would not insult themselves. Only in France to 5,5 million Muslims. After some time, we will be able to see pictures in Europe that in 1980-1990-s could be born only from the authors of science fiction novels or films. European nations will have to give up their "habitat" or give battle, the outcome of which is unknown.