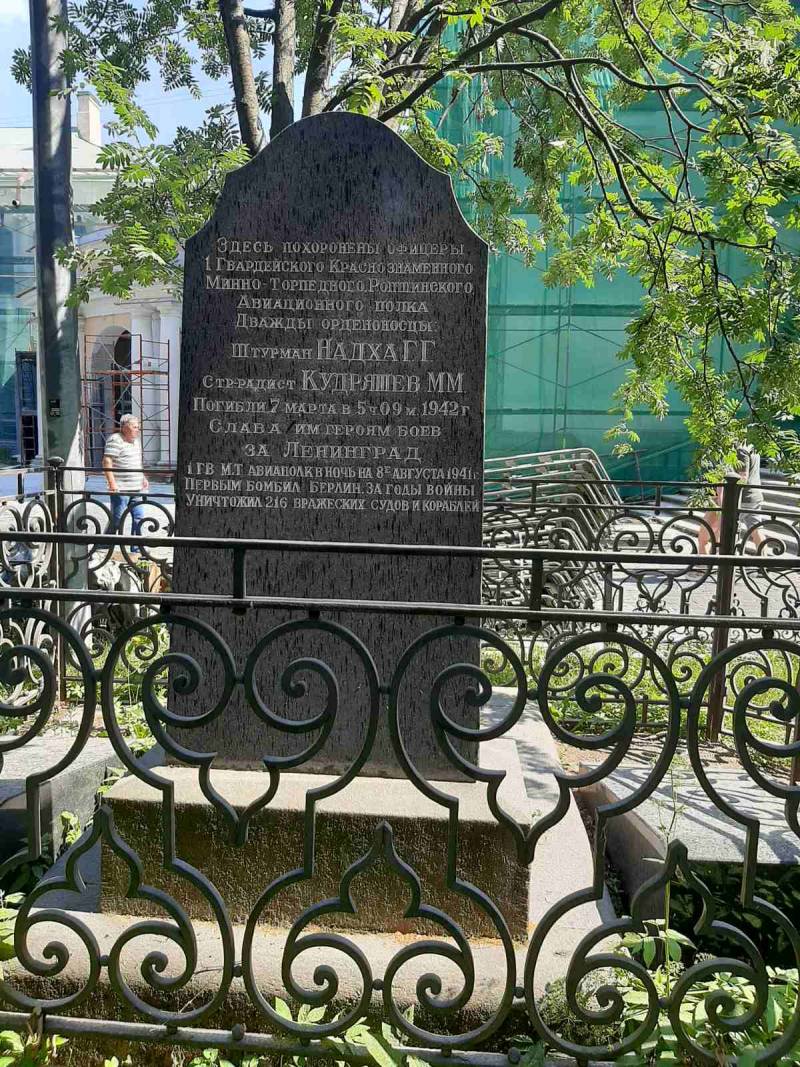 1 MTP for short or the First Mine and Torpedo Regiment of the Baltic fleet - the unit for our naval air force is legendary - they attacked enemy ships, laid mines in the Baltic, they bombed Berlin. Before the war, the regiment was advanced and actively tested new equipment and created tactics for the young naval aviation. The best got there, among these best were people buried in the Lavra - one of the many crews of the regiment.

“Based on the orders of the People’s Commissar of the Navy No. 0330 and No. 0331 of 25.04.1938/0036/20.08.1938 and No. 27 of 1938/1/3, as part of the BF Air Force, on the basis of the 030th mine-torpedo aviation squadron, in the second half of 162 was the XNUMXst mine-torpedo aviation regiment of three squadrons was formed, armed with DB-XNUMXb aircraft. The squadrons of the regiment were formed according to the state No. XNUMX/XNUMX-B.
The regiment commander is Major Preobrazhensky, based in the village of Carefree, 6 km from Strelna. At the base - it is said very loudly, the 27th squadron was armed with obsolete materiel, and was essentially a light bomber squadron, armed with R-5 aircraft. For the Soviet Navy, such a powerful unit with the most modern aircraft was something new, requiring a special approach and qualified pilots. The regiment was formed and trained in a year, four squadrons were created in total - 60 aircraft - a large force, and the war took the exam in November 1939.

The regiment, or rather, its third squadron under the command of Captain Tokarev, went into the first battle on November 30, 1939. The main task of the regiment was the destruction of the coastal defense battleships of the Finnish Navy Väinämöinen and Ilmarinen. Two flights of aircraft were sent out to search. First, the target was not found, ran into anti-aircraft fire and lost two cars. The second - in the area of ​​​​Cape Hanko, the target came out, but the drop from 200 meters did not give a result. Soviet pilots who had no such experience only had to make sure that horizontal bombardment from heavy vehicles against ships was ineffective.

Be that as it may, Tokarev's squadron was raised and thrown at the target. When approaching Hanko, it turned out that the battleships had already left, and the squadron went to the spare target - the oil storage facilities of the port of Helsinki. The weather was disgusting:

“A combat order has been issued - to go to the target. And the weather is non-flying. Heavy snow fell during the night, covering the airfield in a thick layer. Visibility does not exceed a kilometer. Great skill was required to tear combat vehicles with full flight weight off the ground ... The second squadron began to take off at the airfield. To our common chagrin, one of her planes, during the takeoff run, could not withstand the takeoff direction, turned 90 degrees to the right, hit an obstacle and exploded along with the bombs and the crew.
Which explains what happened next, the pilots missed and dropped bombs, which:

“fell in the area of ​​Frederiksgatan 3, between the Technical University and the bus station, in a densely populated area of ​​the capital. As a result of the raid, 91 people were killed, another 236 civilians were injured, including 36 were seriously injured.
Again, in addition to Captain Tokarev's mistake, there was an error in Helsinki's air defense, which gave an all-clear signal just before the raid. No matter how cynical it may sound - in that era, with its means of navigation and guidance, a miss of a couple of kilometers is rather the norm, especially in difficult weather conditions and for a young regiment. Moreover, the task for the pilots was atypical - they were prepared to lay minefields, attack ships and ships, but not in non-flying weather (two aircraft were lost as a result of a critical descent) to bomb stationary targets.

The result of the first day is the loss of two aircraft in the air, the explosion of one during takeoff, and the death of another during landing. The Winter War plan looked smooth on paper, and the aviators had to overcome the difficulties created by the command, which chose such an interesting time to start hostilities. And they overcame them, the regiment was at the forefront throughout the war, both in profile - since January 1940, the pilots laid minefields under the command of Captain Plotkin, and as bombers, supporting the 7th Army on the Karelian Isthmus. Captain Tokarev following the war became a Hero of the Soviet Union, and the third squadron of the regiment - the Red Banner.

In the summer of 1940, the regiment participates in the annexation of Estonia, blocking the coast, and falls into another incident:

“On June 23, 1940, two of our crews, led by the commander of the air regiment, Colonel Sh. B. Bedzinashvili, flew to reconnaissance in the northwestern part of the Baltic Sea. ...

Three or four kilometers from the city, I noticed how a plane took off from the Lagsberg airfield. He takes a course towards Helsinki.

We are approaching the Yu-52 aircraft without any identification marks. I opened the astro hatch of my cockpit, got up and showed the pilot with my hand to turn the car in the direction of the airfield. But the "Junkers" flies the same course and even increases speed.

“Warn with fire,” the commander transmits.

Several tracer bursts pass in front of the Junkers cabin, but this does not change things either. After that, the intruder was shot down.
There were three diplomatic couriers on board, the Finns did not respond to warnings, which is confirmed by Estonian sailors. What it was is still a mystery, in the sense that the Junkers did not turn away on command, the diplomatic couriers were definitely not in danger ...

By the fall, the regiment had gained considerable experience in both combat and sea patrols, but lost materiel - only 3 DB-34b remained, however, DB-f began to arrive, in the amount of 22 units. There were 66 crews, 14 of them with night flight experience. By the summer of 1941, the regiment was one of the most trained air units of the RKKF and the armed forces as a whole. The specialization of squadrons has also taken shape:

In the fire of the Patriotic War

The regiment began the Patriotic War on a regular basis, with attacks on Memel.

“On June 24, 35 bombers and torpedo bombers DB-36 of the 3st MTAP (group leader deputy regiment commander captain K. V. Fedorov, leading squadrons - captains M. N. Plotkin and V. A. Grechishnikov, since August 1, 13 Heroes of the Soviet Union, K. E. Belyaev and future twice Hero of the Soviet Union N. V. Chelnokov.
If we take our data, the Germans lost transport and a destroyer in Memel, if the Germans lost 23 people and the destruction of port infrastructure. But it's not about the losses, Memel was the most important base for supplying Army Group North, and attacks on it greatly hampered the logistics of the Wehrmacht. Strikes at such a distance and without fighter cover were already on the verge - the pilots, figuratively speaking, tore their head into the mouth of the beast. In addition to Memel, the regiment hit the Finnish naval bases, mined skerries ... And then something happened that is just right to call our attack of the light cavalry brigade:

“At the end of the first week since the beginning of the war, the regiment suffered heavy losses. Only on June 30, 1941, he lost 13 DB-3 aircraft and 33 aviators during raids on German crossings across the Daugava near Dvinsk. On this day, his feat - a double ram, was accomplished by the crew of the DB-3f of the 1st AE regiment, consisting of: commander ml. Lieutenant Pyotr Stepanovich Igashov, navigator Jr. Lieutenant Dmitry Grigorievich Parfyonov, gunner-radio operator Jr. lieutenant Alexander Mitrofanovich Khokhlachev, Red Navy gunner Vasily Loginovich Novikov.
Well-trained pilots for operations over the sea were thrown into an attack on a land target, on crossings. Abandoned without fighter cover. This was done not out of stupidity and not from a good life - the tactical aviation of the Red Army suffered enormous losses and could no longer fulfill its tasks. However, the squadron of unique pilots was lost. And then there was Berlin. Starting from August 5, the pilots of Colonel Preobrazhensky performed:

“In total, from August 7 to September 5, the Special Air Group carried out 9 raids on Germany (a total of 84 sorties, of which 50 were directly to Berlin.”
Marine pilots, together with their land colleagues, coped. The damage, of course, was small, but from the point of view of propaganda - colossal - the Germans could not close their sky over the capital for a month. In addition to Berlin, the regiment also worked for its intended purpose. By October 9, 17 vehicles remained from the regiment, divided into three squadrons. By January 1942 - 13 aircraft, losses amounted to 76 aircraft - more than the regiment initially had. The command appreciated the feat of the pilots:

“On January 18, 1942, by order of the NK Navy No. 10, for the courage and heroism shown by personnel in battles with the Nazi invaders, the 1st MTAP, the first of the Naval Aviation units, was transformed into the 1st Guards Mine-Torpedo Aviation regiment."
Then there was a lot - and the division into two parts, and work both on land and over the sea, and another heroic page - the defense of the Road of Life in October 1942. And the most tragic event was what happened in the sky over Levashovo on March 7, 1942:

“Two DB-ZF aircraft collided in the air. At the same time, Captain Babushkin managed to jump out with a parachute and remained unharmed. The navigator senior lieutenant Nadhe died... The catastrophe... became fatal for our second crew. He is entirely, led by the Hero of the Soviet Union M.N. Plotkin, died.
The gunner-radio operator Luchnikov miraculously survived - having fallen out of the plane at an altitude of 1200 meters, he managed to survive, although he lost his limbs.

In 1943, the regiment began to rearm with the A-20 Boston. And in 1944, he again took up naval work, and carried out the last unique operation in that war - the pilots of the regiment destroyed the hydroelectric dam on the Svir River using AMG-1 sea mines. Also, the regiment became the first-born in the use of airborne radar to search for naval targets. The regiment ended the war on May 10, 1945, when the last sortie was made without the use of weapons. He graduated already under the name of the 1st Guards Mine-Torpedo Klaipeda Red Banner Aviation Regiment, with more than 200 victories.

In 1947, the regiment was re-equipped with Tu-2 torpedo bombers, in 1951 - with Il-28, and in 1960, by the will of Nikita Sergeyevich, it was disbanded. The banner was transferred to the 846 mine and torpedo regiment. Why was it necessary to disband the legendary regiment and immediately form a new unnamed-numbered regiment with the old banner, this is a great secret. Nevertheless, the 846th regiment, first on the Il-28, and from the mid-70s on the Su-17, also brought up worthy pilots, among them Timur Apakidze. The regiment was finished off already in the “holy 90s”, when it was first reduced to a squadron, and in 1998 it was also liquidated, the base in Chkalovsk was plundered by marauders ...

The memory remained, the grave in the Lavra and the school museum in St. Petersburg remained. And the fact that in 1941 our naval aviation bombed Berlin, bombed at the most critical moment of the war, and bombed, no matter what.