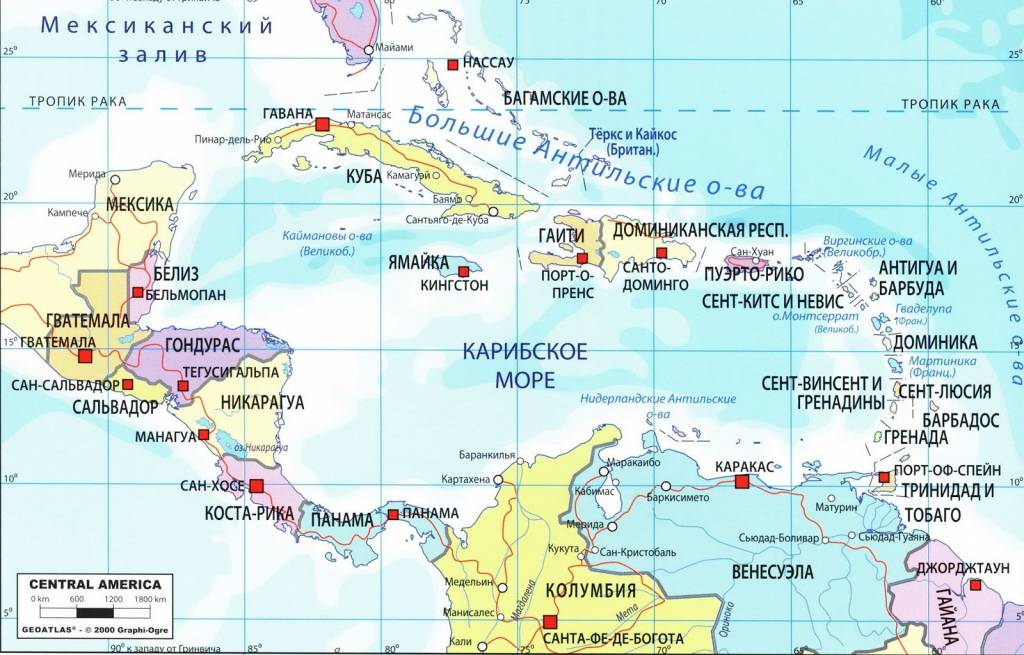 No answer - there is an answer

Despite the response to global security proposals that has already taken place, the situation with Russia's negotiations with NATO and the United States is actually a dead end. The Western alliance is increasingly unceremoniously settling in close to Russia's borders from the Barents to the Black Sea, inclusive.

This forces the Russian side to prepare an adequate response, including to the active approach of the American missile attack. weapons to the borders of Russia. In this regard, it is not ruled out that the military infrastructure of the Russian Federation may be deployed in Venezuela and Cuba, which are friendly to Russia (see below). Cuba - the island of freedom on the "red lines").

And according to Boris Martynov, head of the MGIMO department of international relations and foreign policy, the same can be done in Nicaragua, whose friendly relations with Russia (as well as with Cuba and Venezuela) have long caused, literally, gnashing of teeth in Washington.

“These are all those countries,” B. Martynov clarifies, “that are more or less close to our principles and share the main provisions of our foreign policy.” Including, this is Nicaragua, "which also has a long история confrontation with the USA. Of course, it’s just boiling over, and not only in Russia.”
At the same time, the recent introduction by Washington of new political and economic sanctions against Venezuela, Cuba and Nicaragua again confirms that the United States is stepping up its blocking of countries that are friendly to Russia and hinder American hegemony in the Caribbean-Central American region. Moreover, the colonial territories of Washington are preserved in this region.

Guantanamo base - no statute of limitations

"Military Review" has repeatedly informed about the situation with the American military base in the area adjacent to the city of Guantanamo (about 150 sq. Km), occupied by the United States, in the southeast of Cuba (Money and freedom). The terms of its American lease have long expired, and the Cuban authorities have not recognized the legitimacy of this base for just as long.

As well as the US occupation of the area nearby. Moreover, for 20 years now, the largest foreign prison in the United States has been located here, intended mainly for political opponents of Washington from anywhere. But the American side invariably prevents the discussion of these issues in the UN.

Suffice it to say that the US-occupied area of ​​Guantanamo still remains off the UN list of colonial/non-self-governing territories. Although US President Joe Biden said in February 2021 that his administration "will return to consider closing the prison in Guantanamo Bay».

This is in line with a promise made by former Democratic President Barack Obama (Biden was vice president at the time). But the specific terms for resolving this issue by Washington have not yet been designated. Then, we are not talking about the closure of the military base in Guantanamo, nor about the return of this area to Cuban jurisdiction.

Without Puerto Rico Virgins are not needed ...

The US presence in the region is by no means limited to the Guantanamo base. Washington still possesses in the same region: since 1899 - the island of Puerto Rico (about 10 thousand square kilometers) in the status of a protectorate - “State freely affiliated with the United States»; since 1917 - the Western Virgin Islands, since 1857 - the island of Navassa, torn away from the Republic of Haiti.

According to the resolution of the UN General Assembly on February 6, 2017,

"Only the Congress of the United States has broad authority to repeal and enact necessary rules and regulations with respect to the territories of the United States."
However, the same resolution calls on Washington to organize the free expression of the will of the population of these islands on the question of their future status. But, as they say, things are still there ...

With regard to Puerto Rico, on June 18, 2018, the UN Special Committee on Decolonization, in its resolution, supported the right of the people of Puerto Rico to self-determination and independence. Having recommended to the UN General Assembly

"comprehensively study the question of Puerto Rico in all its aspects and take a decision on it as soon as possible."
For more details, this document notes

"the inalienable right of the Puerto Rican people to self-determination and independence, which is supported by prominent figures, governments and political forces of Latin American countries."

The people of Puerto Rico

"is a Latin American and Caribbean nation with a distinct national identity."
In this regard, Washington

"recommended to expedite a process that will enable the people of Puerto Rico to fully exercise their right to self-determination, respect fundamental human rights, and expedite the clearance and decontamination of areas formerly used for military exercises." It also expressed "serious concern about the actions being taken against the Puerto Rican independence fighters."

The UN General Assembly adopted a similar resolution on July 9, 2010. But it's also in vain... Washington's position is understandable. According to Professor Russell Shimmer, an expert at Yale University in the USA,

“Puerto Rico is one of the oldest colonies in the world. When the US annexed the colony from Spain in 1898, the production of sugar cane, coffee and tobacco became a highly profitable plantation system.”
According to the same data, as well as according to data (2020) of the Puerto Rican bloc "For Independence" ("Independence Party", "Workers' National Party", "Communist Party", "Union for Sovereignty"), up to 75-80% of the total of the Puerto Rican population consider themselves Hispanic, and at least a third of them are supporters of the independence of Puerto Rico.

But its most active supporters are persecuted or expelled from the island, and the results of the relevant referendums on the status of the island are rigged. Despite repeated appeals by the aforementioned Puerto Rican bloc to the UN with requests to consider the facts of falsification of the results of these referendums, the US delegation manages to block these appeals.

Meanwhile, the US monopolies tenaciously hold the economy of Puerto Rico in their hands: high-capacity petrochemical, instrument-making, agro-industrial complexes, and shipbuilding facilities have long been operating here.

According to the estimates of the UN Industrial Development Organization, the annual profits of these monopolies in these industries in Puerto Rico are at least twice as high as in the United States itself - due to less - by about a quarter - wages in "freely affiliated with the United States».

And, for example, in the sugar, fish, textile and citrus industries, working there on local raw materials, wages are lower than in the United States by almost a third (see, for example, UNIDO-Economic and Social Council UN, “Labor segregation in Non-Self-Governing Territories, New York, 2018).

Not just a business

However, it's not just about Puerto Rico's perpetual economic benefits for the US. According to reports, at least 20% of the territory of Puerto Rico actually belongs to the Pentagon and the CIA with their facilities there. And the adjacent islands of Vieques, Culebra and Mona (administratively part of Puerto Rico) are important centers of electronic espionage by the US intelligence services.

There were also located - they are partially preserved - storage facilities for spent military materials and even depleted uranium.

The population of these islands protested more than once against those storage facilities, but this ended in repressions and evictions from the islands. The most active protesters are being evicted - with a house arrest order - to the territory of the United States, moreover, to the "deep" states.

And the US-owned Western Virgin Islands (about 370 square kilometers) are located about 50 miles from Puerto Rico.

West Virginia began to belong to the United States in the spring of 1917: Washington bought these islands from Denmark for only 25 million dollars, threatening Copenhagen with the seizure of Greenland and (Danish until 1944) Iceland. The possession of the same Virginia allows you to control maritime cargo transit in at least half of the Caribbean Sea.

US Virginia also hosts US military installations; Since 1966, a high-capacity oil refinery complex, controlled by US companies, has been operating there. Note that the cost of oil refining here is lower than in the United States, due to the relatively low wages of workers and employees at this complex, and American state subsidies for oil supplies to the same complex. An oil product pipeline has been operating between West Virginia and Puerto Rico since the mid-90s.

It is also characteristic that the United States has not returned the miniature island of Navassa (only 140 square kilometers) to the Republic of Haiti for over 6 years: Port-au-Prince has been making this demand since 1874. And the island was captured under the pretext of ... the presence there of supposedly large reserves of organic fertilizer "guano". Moreover: for the sake of annexing this strategic island in 1856, a special law “On Guano” was adopted in the United States ...

Port-au-Prince is needed by the United States, because it is located in a strategically important triangle: the American military base in Guantanamo Bay in the southeast of Cuba - Haiti - Jamaica. In addition, Navassa is in the northernmost and shortest strait between the Caribbean Sea and the Atlantic. Meanwhile, Port-au-Prince's long-standing requests to the UN, supported by Cuba and all other countries in the region, to discuss the Navassa issue are being blocked by Washington.

We also recall that in the 1870s and early 1900s, the United States obtained from Honduras and Nicaragua the lease of the Central Caribbean islands of Swan and Mais. The local US military and intelligence facilities have become an addition to those in Puerto Rico and Virginia. After the Cuban revolution (1959), the significance of Swan and Mais increased all the more for the United States.

But the authorities of Honduras and Nicaragua, blackmailing Americans from the second half of the 60s with a "repeat" of that revolution in their country, did achieve from Washington in 1969-1971. early return of the same islands to these countries. With the subsequent evacuation of Pentagon and CIA facilities from Mais (mainly to Puerto Rico and Virginia). But the meteorological and navigational stations of the United States remain on Swan.

One can also recall the Panama Canal and the areas of Panama adjacent to it (1500 sq. km): they were controlled by the United States until the late 1990s, although with the formal participation of Panama in 1979-1999. So the United States, by tightening the blockade of Cuba, Nicaragua and Venezuela, all the more will not "give up" the Caribbean...